A Sunday morning in Corfu; a brilliant sun casting long shadows inside our silent house, shining on lemons, oranges and the fresh leaves of sprouting vines. The sea beyond St Elias glitters through a haze that hides the mainland. Swallows flash by, their chattering flirtations adding to a muted cacophony of pigeons, cockerels and barking dogs between the village and grey tree covered hills surrounded by morning mist. At eight twenty a Matins bell. Mountains south of Ermones float between land and sky - Vatos to Cape Plaka below Agios Yiorgos, Gliffada and Pelekas, and beyond the invisible city, Deka and the summit with the dish – 16 miles away above the airport.
*** 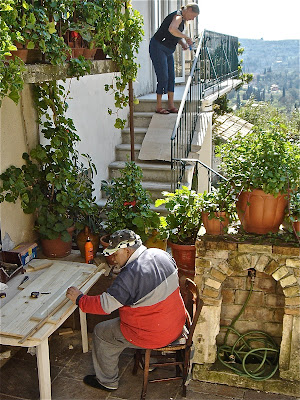 Lin is painting the balcony railings deep Corfu green – a frustrating job with corners and niches to reach with metal paint. Leftheris is making shutters, using tongue and groove deal, knots sealed by singeing, cracks filled before undercoating and painting. These are "proper" for Ano Korakiana he said, “not those” he said pointing at louvre shutters. We have the latter - a devil to strip and sand - so I like the idea of replacing some with the simpler kind, though I’m struggling with making my first frame and shutters for a small window downstairs. Leftheris lent a hand with his circular saw to cut a margin off the side of the recovered kitchen cupboard doors I was using – offering helpful advice on positioning hinges. I’m beginning to get enough prepositions and adjectives to make such discussions intelligible – words like ‘before’, ‘over’, ‘under’, ‘about’, ‘together’, ‘exactly’, ‘in front’ ‘behind’, ‘almost’ – that can be strung on verbs and hung in front of nouns.
Later we were having tea outside and one of the cats began edging its way through the front door and I said – if I remember – “Orchi gata! Oxi mesa stin spiti” as if a cat would take any notice in either language.
Vasiliki gardening next door said “Simon! ‘sto spiti’…orchi ‘mesa’…orchi ‘sto spiti!’”
“Efharisto Vasiliki”
“Parakolo Simon”
‘House’ is neuter – ουδέτερο - and I was treating it as feminine - θηλυκό. Later Natasha told me a special imperative for cats - τσίτο! And other solely for dogs: όξω!
At the end of the afternoon Lin had just finished with the long ladder which I’d held while she finished painting the struts on the balcony railings and other patches of ironwork she couldn’t see before. I had a cup of tea; Lin her coffee. Natasha was sat outside her house almost beside us.
“Theleis tsai;” I ventured.
She shook her head gently. “My father has tea. For his throat”
“Of course tea is medicine – iatriki – ιατρική (a word I’d learned) in Greece.”
“You like coffee?” Natasha asked Lin
“Nescafé” she replied
“Ugh!” I said “but Lin was a teacher"
"I only drink tea with my mother – mazi mitera mou” said Lin
“Why do you drink so much tea in England?”
“Polli tsai stin Anglia! Polli tsai” I said
We laughed. “So much tea you are always going to the toilet” observed Natasha
“No no” I replied “when anything bad happens in England we always say ‘Have a cup of tea’ Polli tsai. Panda tsai.”
“What’s ‘the day before yesterday’” Lin asked me
“Prin xthes, ti einai;” I asked Natasha
“Proxthes – Προχθές”
“Ne proxthes’ said Lin “an earth tremor. Did you …?”
She gestured palms down shaking “Ah yes. Very little. My friend phoned from Ioannina. I slept.”
We too had slept through this early last Wednesday morning. We all gestured sleeping. Mark down the road told us it had woken him. Slowly we learn.
“Seismos - σεισμός” I ventured “Πίνω κούπα τσάι! Trauma (borrowing another word) - Κάθε τραύμα, πίνεισ κούπας τσάι!” Adonis had said last week “After only five years.” He held out five fingers, careful not to present his palm “You will speak Greek” “Like Mrs K speaks English” muttered Lin. Our dear neighbour of 30 years came to Britain from Krakow after  the war. She conveys her meaning via an enduring struggle with English grammar.
** ** **
The Greek test last Tuesday went well. Aleko at Sally’s in Ipsos selected from several pages of phrases in English; sought answers in Greek, from individuals in turn and from the group – just four of us. Of course I’d had help from Yiorgos while we waited for our flight from Manchester. So I couldn’t crow even quietly, but I was pleased I could often answer without looking at my screen. Lin whose pronunciation is better than mine decided not to come – unsure she knew enough.


Dear Simon and Linda. I am glad you enjoyed ‘the test’! As I said it would be fun and next time I hope Lin joins us. It’s very strange but the very word ‘test’ or ‘exam’ frightens so many people! For example X who is usually very good was not her usual self and when I asked her later she said that even when she was at school, when they had exams she didn't go!! Full of nerves she was!! Why? why? why? Next session, can't remember if I told you, I intend to teach one week and the following week do what we did yesterday. Isn't this a better idea? So, NO final test! Last week of April meet me at ‘my’ kafenion 19.30 for a quick drink and then we will go on to ‘Vitamins’ (hope he is open by then) for something to eat. Please confirm that this arrangement is suitable for you, because if it is not we can change it. With love,  Aleko

*** ***
On the Wednesday before we left for Greece I took the train south, via London, to see the Hills and again enjoy Wendy’s delectable fish pie followed by apple crumble and their kind hospitality including cups of tea. I missed their neighbour John who was out, wanting to thank him for two things – setting me on my search for Jack’s original films and introducing me to Richard and Wendy Hill. I showed Richard a photo of one one of the old olive logs I was thinking of bringing him to carve. He shook his head “Look at those shakes. It’ll just fall apart, Simon.”
An email from John Peters in Havant:


Hi Simon. Sorry that I missed you on your last visit. I was teaching computers to the local organisation for people with physical and mental disabilities. Richard said that you have lost my email address and I have now scanned the copy of the paper clip that Richard gave you. Maybe you would like to include it on your webpage. Its in A3 format. I hope to see you perhaps next time. Regards

Great! I’m so glad to  have recovered your email John, so I can keep you posted on our continuing search for JH material – as kicked off by you! I’ll write to you at greater length next week. Best wishes and thanks for the newspaper story which Richard and Wendy told me about and kept for me. It’s useful to have it digitised. Simon

I’ve told John I’d like him to join the ‘JH Committee’ - so now it includes Ian Wegg, Tony Herbert, Mark Taylor, Mark Jack, Jennie Constable, Ray Langstone and John Peters; an informal group, two of whom I’ve not yet met in the flesh – Ian and Tony; people who share my interest in Jack’s films, enjoying his broadcasts when younger, and now helping make them available again. Tony has sent me a DVD with a superb sample of Out of Town episodes - the best I've yet seen.


Dear Tony... having just watched the Out of Town episodes starting with clapper board, trade carts, various objects, high pheasant and the fishing gossiper stymied by Stan, and Jack's recollection - with French accent - of the talk about Marianne and Britannia, and the breaking of the chalk springs, I'm over the moon. What quality at last! Linda who met JH just a few times (he was at our wedding) was listening to it while cooking downstairs and said "he sounds alive".' It certainly is an example of how the quality of the film makes the difference. I felt frissons. I'm not sure how I feel. He seemed so close, even though these episodes are older than the ones I've had for quite a while. They're different too from the Meonstoke films of course, having been live broadcasts. Wonderful.   I'm now looking forward to seeing the rest of what you've sent me. I was wondering about streaming some of this but my inclination - even if I had your permission - would be to hold back on this material. It is especially precious.   As I say even from Greece I felt this evening like picking up the phone and saying 'thank you' more directly. I hope we shall soon be able to visit Marion B together, but I'll leave that until mid-May.   I am currently ripping the three Out of Towns from both disks for my collection. To watch the other material I will refer solely to your brilliant DVDs. I have that little trench pipe with the silver band and the goldfinch. I take it you added titles and credits but seamlessly - even with the abrupt start on the Dorset clocks. This has to be an example of how starts and endings might be sliced on to archive 16mm film for public showing, doesn't it?    As for the 'last broadcast' OoT wouldn't it be good if the OB film for this turned up either at SWFTA or among Marion's tapes? Then we can splice your top and tale to it....S

****
After midnight, early Saturday morning, we strolled through the well lit streets of the village, until beyond the bandstand and carpark the road went dark enclosed by tall trees between us and Venetia, scops owls calling from above and below, far and near.
“I’m not sure I’d care to stroll here at night alone” said Lin
“Two can put a hold on each other’s imagination. Alone you may think you hear something, embellish olden fears, summoning things that watch and wait. Remember our late night walks in Lydbrook. We knew all the paths. All unlit. The wind rattling the hedgerows in winter; the full moon showing us shapes and shadows; the things that followed, murderous ghouls, the chain-saw man who lurked that Richard and Amy begged me to invent."
We woke dogs which barked across the night waking other dogs who took their turn to warn the world of our passage. In the narrows of Venetia we took the cobbled steps of narrow Odos Iacobus winding down through houses and hedges to the lower road, on which we walked back into the village, a circuit that took us back up a rising path to the medical centre on Democracy Street.
** ** **
It seems as if the long projected PAOK supported soccer pitch below the village will not now be completed. The site has stood there for at least a decade. Then, last winter, there was a hint money might be found to complete it, but the latest news is that the proposed €420,000 grant that was to be made available by the old Faiakon Demos - abolished under last winter's Kallicrates reform of Hellenic local government - has been in some way or another recalled to a central budget. The suggestion is that the site be returned to pasture.

It would be good if a football field for Ano Korakiana could be paid for by money from the projected windfarm project on Pantokrator.
***
Richard, our son's E4 competition entry