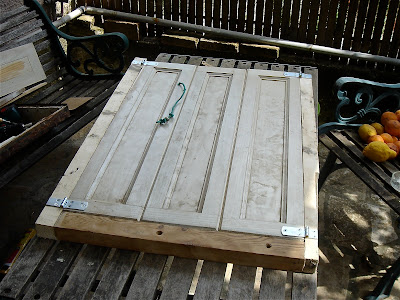 <Μικρό παράθυρο, πολλά δουλειά>
Glib I may be but making this set of shutters for the small window of our downstairs dining room is a pig. All the while Lefteris is making four pairs of large shutters for his house; the first pair already fitted and working.
“Do you think” I’d said to Lin “that this job, this time, might actually be reasonably straightforward? You know. Μake a frame, make some shutters, screw the frame into the window and then hinge the shutters to the frame, undercoat, paint and insert”
By the third day I was remembering the exercise in Three Men in a Boat where, lacking a tin opener, they try to open a can of pineapples. A four sided frame could not be offered up. It just wouldn't go in. The front of the window aperture was narrower than the back - indeed not one side was straight nor equal to the others. So we sawed off the top of the frame, using a hacksaw to cut the screws that held it to the uprights. In the three sided frame, held together by nailed-on cross pieces, we inserted the 'shutters' - recovered kitchen cupboard doors, and fitted hinges. The hinge overlaps on the frame I cut off with an angle grinder. Offered up to the window, the shutter frame was obdurate. We sawed and sanded until it fitted, but the doors closed unevenly. We had a row. We had a cup of tea.
Lin said “the bottom of the frame is just too short. Why?”
“So?”
“Cut it”
“What!”
“Cut it! Like doctors rebreak a badly set bone”
I sawed through the bottom of the frame. This time the two side pieces did fit and the doors shut. Back on the work bench - our veranda table - I mended the frame with a long screw; glue filling the gap that was needed to gain the extra length.
“OK. You can paint it now”
Next day the painted frame would not fit
“But it was OK yesterday” I muttered.
“Yes but now we’ve removed the struts”
Back on the drawing board – veranda table – Lin examined the assembly
“This side piece isn’t square. It’ll have to come off”
“No no no!”
“Yes!”
A few blows with the hammer, a couple of screws removed and the side piece revolved and left unfixed, things looked spikker and spanner, until we offered it up again and even with several blows, by me, with a lump hammer, it wouldn’t fit.
“Take it out”
A further examination
“Cut the bottom frame again” says Lin 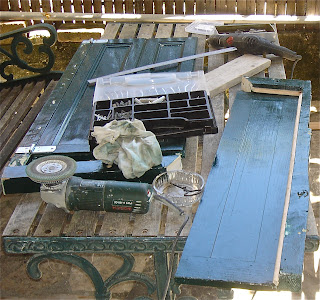 I cut the carefully mended frame where it had been joined.
“Right! Now it’s in halves. Let's get one half right and then worry about the other.”
"This is what won the war!"
This part of the whole, once repainted where it had been fine-moulded with the angle grinder, fitted excellently - but for gaps that can be filled later. The one shutter opened and closed.
“Shall we leave it with the one door? That looks pretty good” I said
“Ha ha! Don’t let Leftheris see or he’ll laugh.”
By mid-afternoon, breaching siesta with a few short bursts of the sander between offering up, the second half of the frame and shutters were screwed in place. Another hour’s fine adjustment with wedges, and the shutters closed neatly. 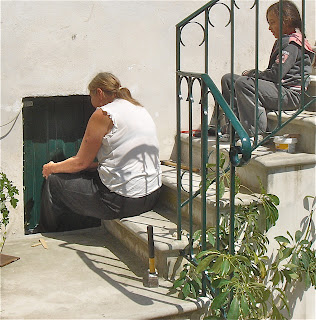 "Now we put quadrant inside the frame for the shutters to close on, fill and paint"
Between our struggles I’ve been rebuilding the front door under the porch. Lin’s been painting gates, garden fence and finishing off the balcony railing. I like Corfu green.
*** ***
In the last few days I’ve clarified the different sequences of films made by my stepfather. Ian Wegg is doing this in a more organized way, building up a record of every broadcast from archive copies of the TV listings of the day going back to the 1970s, perhaps earlier. I’ve established that the nine commercial DVDs featuring twenty seven episodes of Out of Town, were never broadcast. Phil Wade who helped make these with his late father, Steve Wade told me a while ago, but it hadn’t sunk in: 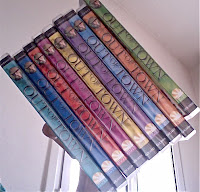 In 1986...using the original cut film inserts that Jack had bought from Southern Television and had in his shed at home.  He acquired a Steenbeck and, with my father, selected films to be inserted into the new series.  The films were tele-cined at Bournemouth Film School and copied to VHS.   My father and I, with Steve Wagstaff (camera) and Brian Mathews (PM), then shot new links in his garden shed and then sat in his front room while he did a new voice over to the VHS of the film insert.  Brian and my father then took these component parts to London where they were assembled as the final programmes…. I am also concerned that the DVD cover states  'The original series seen as seen on TV' as this is not strictly true and that there is a  '© 1988 Southern Television Production' on the cover.  To my knowledge Southern Television Production had absolutely no rights whatsoever over this series.

The shed in the 1986 DVDs, for which Jack cherry-picked a choice of Stan Bréhaut's location film from original Southern TV episodes of Out of Town, shows greenery through its windows, and many more tools. It wasn’t the studio set 'shed' that had been a mainstay of Southern's Out of Town broadcast from Northam in Southampton. It was my stepfather's 'real' shed next to his last home, Raven Cottage, Belchalwell, Dorset.
I’ve also learned, and should have caught on before, that it was the same team, a few years after Southern Television lost its franchise in 1981, who produced Old Country. Phil writes:


In the early 1980s a company I was working with called Lacewing Productions was commissioned by Channel 4, via Limehouse Productions, to produce a reworked version of Out Of Town called The Old Country.  Over two years we produced around 60 of these with my father directing and me doing sound.

These were the films that were made at the village hall in Meonstoke using a mocked up studio ‘shed’, and new outside broadcasts filmed by Phil Wagstaff. I’ve corrected my entry in Wikipedia accordingly, embarrassed at being confused for so long.
*** ***
Last Saturday there was a get-together of the carnival organizing teams of Ano Korakiana and the city of Corfu in which over food and drink they agreed to collaborate in planning and running next year’s Carnival.

But there’s also, after the news about the loss of the money for the football field, further troublesome news for the village. The Ministry for Rural Development in Athens is consulting over a law requiring Agricultural Co-operatives with capital holdings under €60,000 – in other words, most villages - to either amalgamate themselves with another co-op or go into liquidation. Consultation ends on 20 April after which, as Thanassis says on the village website, «ο Θεός να βάλει το χέρι του»‘we are in God’s hands’
** ** 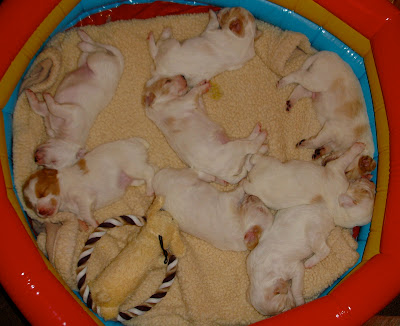 Amy sends pictures of the puppies born to her hybrid bitch, sired by her Brittany spaniel dog.
***
A delicious chicken curry at Mark's with Angie and Martin and their young son Theodore. Sally's away in England a few days for her brother's funeral. One sniff of the village wine we'd brought, gift of the neighbours, Angie, said "That's not local, that's Zakinthos!" Nearly dead right - except that I'd helped make this wine. Leftheris' grapes withered in the exceptional heat last summer. He used grapes from Zakynthos, where Angie'd lived six years. We drank to absent friends - missing Sally. 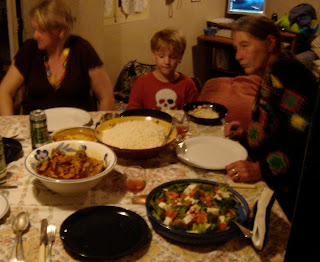 Did my email arrive, Edmund? If not I'll re-send, but I'd like you to confirm our draft minutes as conveying what we discussed and decided re the future for CHPCP. Best. S


Good Morning Simon, Linda I do hope you are both well, everything is ticking over quite well here. Its so good to be pushing ahead. We are starting an hour earlier to get as much as possible done, the cash is trickling in we are able to put more fuel in the lorry. Midland Heart are paying in, the phone has been going mad for the gardening and we have lots of quotes for guaranteed work. Hope to see you all soon. Edmund. Oh ya we did receive your emails

****
Struggling with Greek syntax Lin said "I can never find infinitives. How do you say 'to have', 'to be' 'to make', 'to do'?"
I looked in our Greek grammar book index. Loads of verb forms are mentioned but not the infinitive.
"So how'd you say 'To be or not to be'?"
I checked the lexicon Niko had put on my laptop. It was <Να ζει κανείς ή να μη ζει>
"So how does that work? I think ζει means something like 'non', but it's an example of the different way Greek is constructed.  I can't make head nor tail of it."
"So that's why some Greek people, before they speak good English will say things like 'I want you help me' rather than 'I want you to help help me.'"
*** ***
A chat the other night with Mark's best friend Martin caught me off guard on something about which I ought to be informed, having been keen on alternative voting systems for a long time, vexed by our majoritarian first-past-the-post system. Most democracies sitting in the UN have proportional representation. We might have it soon in England, but this extract from the Guardian piece by Daniel Boffey on 16 April reminds me that I'm not the only one whose eyes have left the ball:


But it would be fair to say that the referendum on AV, to be held on 5 May, has struggled to climb to the top of the news agenda. "We have had tsunamis, wars, nuclear disasters. It has been tough to cut through with our message and now we have the royal wedding to contend with," said Jonathan Bartley, the former aide to John Major who has been at the forefront of the yes campaign.  Nevertheless, this is undoubtedly a hugely significant moment in the evolution of the British constitution. If the yes campaigners get their way, the British voting system will undergo its most radical transformation since the decision in 1928 to lower the voting age for women to 21, in line with men. The latest research into the effect the alternative vote would have had on the 2010 general election, carried out by Professor David Sanders at Essex University, suggests a mere 32 seats would have finished up in different hands. But those seats would all, according to Sanders, have gone to the Liberal Democrats and 22 would have been taken from the Conservatives. The coalition might never have happened. Labour and Gordon Brown might have found common ground with Nick Clegg's party.  So, while the great British public may not yet be tuned into the debate, the politicians certainly are. The parameters of future elections will be changed, the old certainties may have to be reassessed.   Vernon Bogdanor, research professor at Kings College London and one of Britain's foremost constitutionalists, told the Observer that history suggests this could be a defining moment. Britain does not do referendums all that often. But when it does, the consequences tend to be far-reaching.

References: The Electoral Reform Society's guide to AV, and the Jenkins Commission of 1997, whose longer title is Independent Commission on the Voting System, and their recommended method of voting, the Alternative Vote Top-Up or AV+
Posted by sibadd