Started taking down some notes on film as mum trawled her memory of seventy years ago; she in her state bed at Brin Croft speaking about life at 5 Bina Gardens in 1939 and 1940 - of bombing. "We heard the bombers going over, and they went on and on it seemed and the more they went on the more scared I got

Mum recalls the war from Simon Baddeley on Vimeo.
Classical - Beethoven's 5th Symphony (complete) by DeeCee121
Still falls the rain...The Raids, 1940: Night and Dawn by Edith Sitwell
I'm used when in SW5 to cycling by the old home at Bina Gardens. In 67-68, when I had my first job at the Tavistock Institute, I lived on the ground floor - the house turned into three flats by my grandmother. I nearly burned it down, throwing what I thought was a dead match into a waste basket, going out for a pint of milk; coming back to find a fire engine outside. Smoke was smelled early by my grandmother's resident landlady, so I'd only singed my little kitchen leaving a messy stink I could clear up myself after a telling off for culpable stupidity.
**** ****
It was John Martin's birthday yesterday. Annie sent out a circular to friends asking for a message she could put on a DVD for the celebration.


Happy Birthday John! from Simon Baddeley on Vimeo.
"Bit long winded" said Lin, but I sent it anyway with soundtracks from films John and Annie have made in Australia of Mayor's and Chief Executives in conversation.
** ** **
Elections in Greece, local or national, happen on Sundays. On 2 January, Spyros Thymis was elected President of Ano Korakiana's Local Council, and of the two nominees for Vice-President - Spyros Tsirigotis and Phokion Mandylas - the latter was elected by 3 votes against 2.

What I find inordinately pleasing is that I am starting to be able to get most of the meaning from postings Thanassis and Katya put on Ano Korakiana's superlative website
*** ***
After his return from a grim 18 days in an Iranian jail the talented Iason Athanasiadis had gone off my radar.  Checks on his website showed nothing new there for quite a while. But now there's an exhibition of photographs by him from Iran on the LA Times website. This is an individual who loves Iran, who had special access there through his language skills and Greekness, but who's now been banned from going there. let down no doubt in the eyes of the local police by his English parentage.
** ** ** 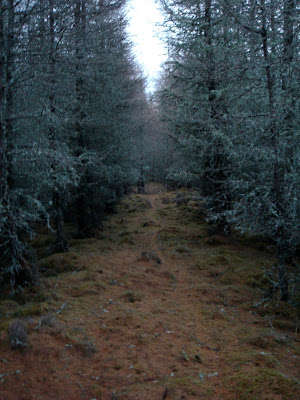 Again despite my irritating limp I trudged with the two terriers from Brin Croft towards and over the esker across the flattened meadow to the forestry track that runs east-west above Inverarnie, a chill wind stirring the trees into the sound of surf until I could cut south into the shelter of the woods above the village, joining that mysterious path again, from which where it divided I took a slightly different direction, carrying on instead of turning left towards the lane that leads back to my mother's house. After a while the path became rough, seemed to trail off altogether into rutted planting ditches, but I soon picked it up again heading straight and direct through tight ranks of blue branched larch, until to my astonishment, I came to the small stream I'd crossed when I joined it. All unaware and thinking I was strolling east I'd entirely doubled back on myself.
**** *** ****
Also silent for rather too long were Aris and Katie Roussinos, working on a project to harvest premium olive oil from ancestral land in north west Corfu. Then Aris who writes - more than well - replied to a Christmas greeting just before new year:


Dear Simon. Merry Christmas to you too, and a happy 2011. Apologies for our long silence: our laptop gave up the ghost in Corfu, and by the time we came home we'd forgotten our Blogger password. We've tried every possible permutation of likely-sounding passwords, but no joy. Annoyingly, we lost almost all of our photos too. Anyway, we're back in the UK, working again and dreaming of going back. It seems the bar to entry into the olive oil market is the lack of bottling plants in Corfu - in fact a more sensible, if less romantic, idea would be opening up a bottling plant-for-hire... I hope all's well with you. With very best wishes, Aris and Katie

Dear Aris. I doubt there’s a successful enterprise in the world that hasn’t suffered a few false starts. I suspect you have learned a thing or two. I take your point about the dearth of bottling plants. There’s a busy olive oil processing factory just below Ano Korakiana – a hundred metres off the Kato Korakiana road out of the village. The owner also runs a metal working business. I understand that families and individuals take their olives down there – to extract, tin and bottle olive oil - mainly in the new Year ... the place is lit up working 24/7 for a couple of months. Have you thought of visiting? It seems that it must provide a service for a limited area, and certainly not your part of the island. Thanks for writing. Please stay in touch. Our very best wishes to you both for 2011.

Hi Simon. Thanks for this; I'll certainly have a look next time I'm over. The issue is, there's bottling and there's bottling: EU H&S regulations (compliance with which is mandatory for sale to Northern European supermarkets) are immensely strict, and expensive to adhere to, and Corfu doesn't have much of an infrastructure to support this. I've noticed a mini-boom in Corfiot local produce recently, so things are changing; I think part of the problem is the lack of co-operatives in Corfu compared to olive-growing regions on the mainland- there, farmers club together for machinery and marketing costs, whereas in Corfu... At the risk of sounding German, Corfiots have good and bad points, and they're largely the same. As (I've realised) I simply don't have enough trees to make oil production a sole income, I'd be reliant on working with local producers to buy their surplus oil and market it abroad. As for the last 300 years or so Corfiot olive oil was sold primarily for industrial purposes, there's been a degree of laziness in the local sector: olives are allowed to ripen, fall naturally and over-ripen/spoil on the ground for ease of picking, rather than being beaten from the tree at their purpling best. On the credit side, this gives Corfu its unique landscape of towering olive trees. On the debit side, it leads to often indifferent oil. So, to make the oil viable as a high-end product, I'd have to persuade dozens of local small producers to severely prune their trees (for ease of picking), pick the olives in the most labour-intensive way possible, then process them somewhere I could oversee the process on dates close to each other ready for bottling and shipping to points north and west. Corfiots being Corfiots, there are a number of different routes to financial disaster here. Ultimately, this would be a more viable project for an enlightened feudal landlord than one idealistic peasant amongst many. The one local competitor I've found (Martinego from Avliotes) produces bog-standard oil, and bottles it themselves. So for now, I'm treading water working in TV in London again (SB note: Aris in a podcast on The Word in May 2009 joins in a  discussion on the state of TV), hoping that the imminent phasing out of olive subsidies will enable me to buy up decent-sized plots over the next ten years or so and start in earnest (or buy barren land ... and plant new trees: the yield and quality of which would be far higher than in our damp, foggy Northwestern valleys). Anyway, we'd very much like to stay in touch.

Dear Aris. Fascinating to read your analysis. It makes such sense.  My thought. He’s young. Bright. Knows the globalisation riff and can make a living playing it yet still thinks small is beautiful. He’s not going to let this go. These might be the first paragraphs of the memoirs he’ll write thirty years from now. Further thoughts. Anyone who isn’t pondering these (almost) insurmountable challenges isn’t really alive. Failure is not a shame in these circumstances. Giving up might be.  Long live Sisyphus (Camu’s version) who must surely have trodden water a while before starting up that hill again with his boulder. Can I put your analysis in my blog? “there’s bottling and there’s bottling”, “beaten from the tree at their purpling best”. As Michael Caine would say “not a lot of people know that." Your endeavours fit with ideas I’ve been following and even pursuing around localism, sustainable regional communities (my friend John Martin at LaTrobe), the governance of common pool resources (Elinor Ostrom at Indiana), the recovery of the commons, and urban food growing (my friend Richard Wiltshire my theorist-practitioner) – all interconnected. Power to your elbows and best wishes to Katie. Simon (in Scotland, then England than Corfu)

Hi Simon. Just to add, in case you didn't see this on the Guardian website, this is how olives should be harvested (film from Valentina) ...notes:  1) of course the oil will taste good straight from the mill, any oil will; that's no indication of its taste after a few months in a bottle. 2) Contrary to assumptions in Northern Europe, Italian oil (where it isn't imported in bulk from Greece and Tunisia) is generally a product of huge aristocratic latifundia* rather than happy small producers. Corfu was the same until land redistribution in the 1920s, which was undeniably good for the peasants but possibly less so in terms of access to international markets (My dad's still quite bitter about this...). Best, Aris     *Where the southern latifundia were broken up after the war, the landowners generally bought the land straight back from the suddenly cash-dazzled peasants.