Έπιφάνεια: the blessing of the waters 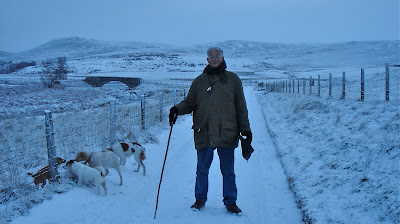 Cloudy in the morning sunshine from midday onwards, the opposite of the snowy landscape of the Highlands in Scotland, where our friend Simon Baddeley enjoys a walk ...

I think on impulse that only our part of Greece compares to the Highlands - in any weather any season. What pleasure to be walking with dogs, daughter and son-in-law (his photo of me) amid this sparse landscape, a chill wind and the sound of water where Allt a'Mharcaidh winds down the centre of Glen Kyllachy to meet the Findhorn just past the stone bridge at Garbole. The road from Farr had been icy, piled snow rubbing the underneath of Guy's car, and falling steadily for an hour. On the lower ground the air cleared. 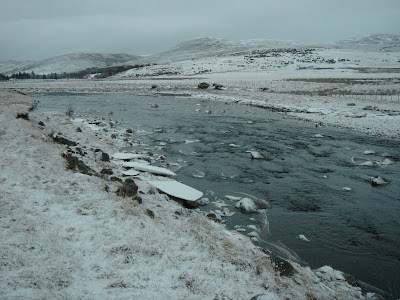 We walked the dogs. Increasingly used to each other they ranged in four, in pairs and separate, ever exploring but never going more than a hundred yards from us as we strolled back towards the deer fence that marched with the burn. "I'm surprised we've seen no deer" said Amy, "they should be on the lower ground in this weather." "I've seen none, but for a glimpse in the woods yesterday - a flash of red." "That may be where they are." Amy put her dog Malo - the Brittany spaniel - on a lead as we came back to the car, though we'd have seen another vehicle a mile away. My dog Oscar picked a quarrel. The two joined in a snarling knot for a seconds. "It's always when you put a dog on a leash that happens!" I said "It doesn't help that both bitches are coming into season." "Yet when they are out here they seem to forget about sex." "Obviously not." The banks of the Findhorn were strewn with sheets of ice thrown off by the river during the thaw of the last few days, but the water level's already down from a day ago; the weather getting colder. 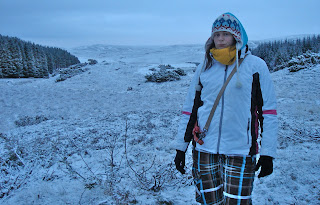 "You know I was listening to a podcast in which Aris Roussinos, who'd rather run an olive oil plantation on ancestral land in Corfu, makes his current crust as a TV development producer - a job my stepfather did as well as actually broadcasting. Aris was speaking about the 'massive crisis' in TV broadcasting (10.14 in the Word podcast 20 May '10 with a reference to Aris' article 'Why do they commission this rubbish' here, and the removed YouTube 'Monkey Tennis' episode here) and the struggle to invent programmes that would keep up viewing. "It starts with a catchy title", he'd said. You need that to catch a commissioning editor's short attention scanning hundreds of ideas ... I don't think Amy or Guy were listening to me. "Aris spoke about an idea for a film about gay Taliban - (from 16.50 in the podcast) "not that new so... " Was our TV always moving wallpaper; the idiot's lantern - with some magnificent exceptions? I suppose anyone my age has had to watch Reithian principles consumed by market society. That BBC TV should endure as a public service was always unlikely. It's so-called elitism was what I liked. Most of the public are paying for and not listening to the only broadcasting (as distinct from narrowcasting - the small mammal that is replacing it) I want to hear - Radio 4. I wonder why I can't buy a radio set that reads no other channel so uninterested am I in any other wavelength...but my solace is the thought of the hundreds and thousands who have better things to do and do them. *** Getting bewildered and vexed by radical Islam, I read Pankaj Mishra and about Europe and the Eurozone read through this series in't Guardian. There's nowt so queer as folk and life's more complicated than that...and please may I discover a Greek version of these phrases. And from Dan McQuillan - 'geek - social issue mash-up - bringing those tribes together' - co-founder of Internet.Artizans - linked on this blog - I come across discussion - under the uninviting term digital reverse development - which suggests way of diffusing ideas and practices of self-help and localism from poor to rich, third to first world - 'new organisational design, mass involvement; from waves of superficial on-line engagement to lasting social change without building another bureaucracy. What's run out of steam? What's emerging?' Warmth woke a butterfly that settled on my bedside table - a tortoise shell from the buddleia my mother planted earlier in the year. I let it out indoors hoping it'll find a cooler spot to return to winter sleep. 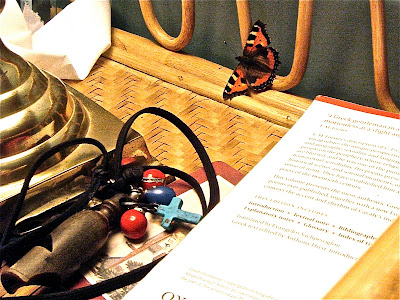 ** ** ** And on 6th January Guy and Amy said "Come with us to see the waterfall above Contin." They took me through a light snow storm over Kessock Bridge into Ross-shire. The sky cleared just off the road to Dingwall. We came to a small parking area; path that led through snow down a steep bank between rimed birches to The Falls of Rogie - first the sound and then the river tumbling over glistening rocks. "We came here in summer and saw salmon leaping" said Amy as we gazed from a small suspension bridge, whose swinging so worried dog Lulu that Guy had to carry her over.
***