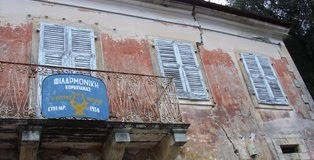 As reported at the end of May (scroll down), the fine abandoned building just below Venetia, that used to be the HQ of the Ano Korakiana band has a deep vertical crack on its frontage (location). It's not been used for ages but plans to restore it are well advanced. According to an item, dated 26 June 2010, on the Ano Korakiana website, The Prefect of Corfu is preparing to declare the winning bid. Already the Philharmonia's administrators are preparing a programme for what will become a home for The Centre for Art, History and Culture, scheduled to run after the restoration: 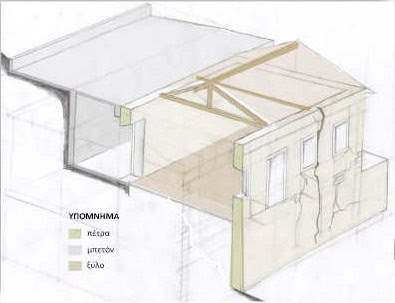 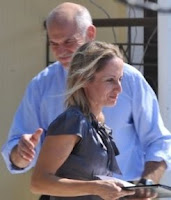 Last October, Mr Papandreou appointed Tina Birbili -Τίνα Μπιρμπίλη - as the Republic's first Environment Minister - her actual title 'Minister of Environment, Energy & Climate Change '. On 28 June Spyros Mourelatos interviewed her for Athens News. I wonder what life has been like for Birbili over the past 10 months, up against the piratical greed of those thousands - often rich and powerful institutions - lusting to pour concrete on Hellenic green space. Go for instance to this real estate website - Location Location Location - click on About Us:


Andie Cox , partner in Location, travels regularly between the UK and the Greek Islands sourcing the most interesting property investments in the Greek Market and has been involved in Greek Property since 2003, when with his wife Marie, they bought their first property on the Island of Crete . Prior to working in Greece, Andie worked in production management throughout the UK, most recently as a "troubleshooter" in a first tier supplier in the Automotive Industry.

Cox, who may or may not be one of the good guys, draws attention on his website to Birbili's policies to block building on burned forest land, to demolish illegal building, and to put a stop on all further building in or near forests until they've been officially mapped.


The bill, announced on October 26 (2009), is due to be submitted to Parliament next week after community consultation and also foresees the creation of a special state agency to undertake the demolition of illegally built homes on burned forestland as well as the imposition of stiff fines on offenders...However, it does not say what will happen to homes illegally built before the fires. Essentially, the bill proposes the abolition of a reform introduced in 2003 by former Agriculture Minister Giorgos Drys, (see para on Proposed Legislation here) under PASOK’s previous administration, which dictated that at least a quarter of any given piece of land had to be covered by trees for it to be considered forestland and merit protection. Birbili’s bill seeks to reinstate the status quo which existed prior to Drys’s intervention, when only 15 percent of a piece of land needed to be covered in trees for it be characterized as forestland (my italics) (ref: Nov 2009)

I really would like to know what's been going on at Bibili' Ministry in the long frustrating fight against the global despoilers, the concrete men, by no means only Greeks. See yearning-burning-earning. I would have thought you'd need a bruiser in the Barbara Castle/Margaret Thatcher/Dora Bakoyannis league to deal with the obstinately layered complexity of land mis-use in Greece. Here is a recent announcement from her Ministry announcing strategic plans - a 'roadmap' for the next 40 years - for energy in the Republic. Tina Birbili is evidently bright. She's a highly qualified physicist. She has had strong backing - certainly when appointed - from George Papandreou but I wonder what progress she's making in her dealings with those complicated personae - the Greek Lopakhins.


"I've bought the estate where my father and grandfather were slaves, where they weren't even allowed inside the kitchen" (Chekhov 738)

For the moment my intuition is that the Lopakhin's worst excesses are curbed less by Athens than by recession.

George Friedman founded STRATFOR, a subscription based web service, giving Western oriented information reports on issues and countries across the world. They've circulated a monograph on 30 June on the Geo-politics of Greece - its last section includes this on Greece Today:

Ultimately, Greece needs to find a way to become useful again to one or more great powers — unlikely, unless a great-power conflict returns to the Balkans — or to sue for lasting peace with Turkey and begin learning how to live within its geopolitical means. Either way, the next three years will be defining ones in Greek history. The joint 110 billion-euro bailout package from the International Monetary Fund and European Union comes with severe austerity strings attached, which are likely to destabilize the country to a significant degree. Grafted onto Greece’s regionalized social geography, vicious left-right split and history of political and social violence, the IMF-EU measures will further weaken the central government and undermine its control. An eventual default is almost assured by the level of government debt, which will soon be above 150% of GDP.
It is only a question of when, not if, the Europeans pull the plug on Athens — which most likely will be at the first opportunity, when Greece does not present a systemic risk to the rest of Europe. At that point, without access to international capital or more bailout money, Greece could face a total collapse of political control and social violence not seen since the military junta of the 1970s. Greece, therefore, finds itself in very unfamiliar situation. For the first time since the 1820s, it is truly alone.

And Jim Potts, at Corfu Blues, notices our Foreign Secretary William Hague signalling his government's search for closer connection with Turkey - words from 16.29 in his speech at The Foreign & Commonwealth Office on 1 July.

* * *
This twelve minute report by Catherine Nicholson, Nicolas Ransom, Alexia Kefalas, Aurélien Porcher and Antoine Sextier on 21 June 2010 for France24.
and for some serious nerdish wit from the Vlogbrothers a few months ago explaining the Greek debt crisis and why the Euro zone and the IMF are trying to bail out Greece, and what the rising cost of sovereign debt means for budget deficits throughout the developed world....

And another diagnosis - mid-May - by Bloomberg Businessweek's Peter Coy:

European leaders still don't understand what caused the Aegean Contagion that swept through the eurozone in late April and early May. Swedish Finance Minister Anders Borg blamed 'wolf-pack behaviour' by speculators. Others have railed against clueless rating agencies, feckless debtors, and unreasonable creditors. Then there are those who ask if there's an inherent flaw in the bond markets that made them cascade, turning vague worries into scary, self-fulfilling prophecies.
You can't defeat an enemy you don't understand, and unless Europe gets a better grasp on what went wrong, it will be vulnerable to more turmoil, even with the nearly $1 trillion backstop lending authority that calmed markets...The reality isn't all that complicated. Europe was vulnerable to contagion, and remains so, because its governance and its financial system are weak...For Europe, the strongest defense against another bout of Aegean Contagion would be a unified Continental government with authority over taxation and spending—a United States of Europe. A unified Europe would have the power to prohibit, not just remonstrate against, the fiscal frivolity that brought on this virus. Since such a political solution does not seem remotely possible, more bouts of fiscal sickness are all but certain.