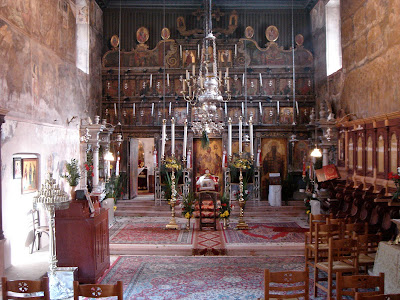 When it was empty again and I was heading up the hill I sneaked this picture of the church, below us. An hour earlier this Monday morning it was with glittering with candles even as bright winter sun shone through its high windows; packed to the walls with men. women, boys and girls and babies in arms; quite a few I recognised. On Sunday evening Mr Leftheris had told me of a service where much of the village would be present - "at Saint Athanasios", and he gestured downwards. His wife and daughter were doing refreshments. I arrived just after the service began and slipped, as discretely as my size would allow, into a cosy building filled with the voices of a choir down from Spartillas, the village high above and further east of Ano Korakiana. Their singing was flawless, mingling with the words of the priests. The choir was invisible, but for the back of a head I could glimpse high up at the back of the church behind a railing. Their voices filled the rich space of the church. I saw Thannassis Spingos and, after shaking hands, stood behind him, in the floor of the church. A layman, a gentleman my age stood up from his chair, came over and offered me his seat by the wall, between candles. The singing was almost unceasing.

The church and everyone there enclosed me. My eyes watered, as they do with age. A small group of children were given communion in the Eastern way with leavened bread not wafers. We all took a piece of this as the service ended. I left after coffee and brandy in the house next door; full of people talking and laughing. A large round loaf of sweet bread was gently placed in my hands before I made my way up the hill to Democracy Street, passing two men working on an old house we've often admired between us and the lower road. 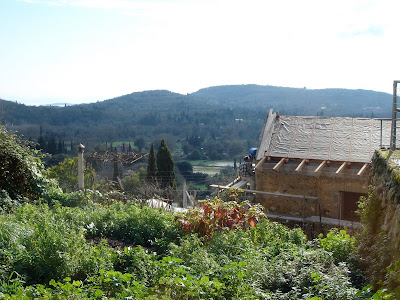 Already we've seen our friends, eaten with them, have more to supper tonight and next week. The boat's dry again; our house cosy. It looks as if we are to have a few days of sunny weather warm enough to dry the washing outside. I've bagged up most of the Bougainvillea I've cut back to a few feet from the ground and we've been on the beach at Dassia gathering more driftwood for firewood.

On Saturday, after staying up late tidying up our text to meet format requirements and making the paper anonymous for the referees, I submitted - on-line - a paper by John and me, hoping it will be accepted for a conference in May - an account of the way the video I started using over 25 years ago to capture political-management conversations has evolved into quite a sophisticated methodology:

PROBING THE HEART OF DEMOCRACY: THE EVOLUTION OF VIDEO METHODS FOR ANALYSING CONVERSATIONS BETWEEN POLITICIANS AND ADMINISTRATORS IN LOCAL GOVERNMENT
Abstract: In the context of evolving video technology since the 1980s, (the first author) has been refining methods of accessing the way politicians and managers work together. Since 2007 the latter has continued this research in collaboration with (the second author), using film to investigate the interpersonal dynamics built in to political-management ‘conversations’. As well as contributing to theories about the leadership in government, this research has produced stimulating training material, used in UK and Australia, to increase skills, and explore values, among local government practitioners negotiating the overlap of political and managerial responsibilities.

Apart from the method it describes I hope the paper will be accepted with the nine 'illustrations' it contains, in the form of a series of links to videos made over many years showing how these films have evolved from studio interviews in the style of mainstream broadcasting to the conversations between politicians and managers that John and I are now capturing, where those filmed no longer tell an external interviewer about how they work together, but actually do work together during filming without the interruptions of the researcher.
Posted by sibadd