The rebirth of democracy in the 1940s

Mazower ends chapter 2 of Dark Continent with the sentence ‘The violence, which Europe had found it so easy to ignore when committed abroad in its name, proved harder to stomach at home.’ Then for three relentless chapters he documents the visitation upon Europeans and Russians of policies that had been a feature of European colonialism. German settlers were transferred from their homes inside Germany or from smaller long-term homes in other countries to settle sequestered land – Poland, Ukraine, Lithuania and ‘living space’ further east - whose owners were widely thrown off their properties and systematically murdered – in millions. Mazower names the death camps but also describes what came first in terms of the detailed domestic values accompanying the policies of the Third Reich – family samplers and a vade mecum emphasising the tilling of soil, husbandry, women’s fecundity, housewifery, the importance of keeping the spirit and soul pure, being of sound stock, checking the lineage of your spouse, marrying only out of love, remembering ‘you are German’. People in lands to the west where some – many - had welcomed collaboration, seeing in German economic policies solutions to the failure of free market capitalism and parliamentary democracy, came late to the realisation that Hitler’s vision for Europe was not to be a collaborative adventure, but the means to create a Europe for a new German empire. Nazi policies in the countries they invaded – east and west – were directed to serving the needs and aspirations of Germans. The world began to grasp – in small numbers at first – the frightful intention of Nazi rule. Blinded by Hitler’s success in dealing with the consequences of economic depression and his boldness in using the state to provide work for millions of Germans, dragging them from the despond of mass unemployment, internal division and the humiliation of defeat in 1918, his treatment of the Jews and other minorities and intellectual dissidents was almost disregarded, mistaken for communist propaganda, exaggerations or, at worst, minor collateral costs. Excepting the relatively few who liberated the camps as the Allies advanced, or who were involved in evidence collection for the Nuremberg Trials, the horror went unrecognised for another thirty years by the mass of the European population. This denial is partly to do with a healthy scepticism about propaganda and marketing, partly to do with incapacity to grasp frightfulness on such a scale. Humans, as Eliot said, can’t handle too much reality. Unless especially sensitive and robust or hardened, we reserve only so much space for digesting evil. Can we see the world in a grain of sand, horror in a handful of dust, black sweat in the sugar? The full import and detail of events in Europe between 1930-1945, remain – despite the sections on the Holocaust in the curriculums of European schools – collectively indigestible. How many can teach such things? I see, and understand, in what I’ve called paedopanic, the expressions of rage, disgust and widespread fear that I would expect to find against the sources of Nazism and the banal impulse to genocide – a term not even in the lexicon until 1941. In last week’s Athens News (6 Feb 09 No 13324 p.5), there's a story that has no doubt been widely syndicated, of ‘priests and doctors in child porn bust’ as a result of a tipoff by British police to Greece’s Cyber Crime Unit. (Don’t read on if you cannot stomach more.) The police arrested, 28 Greek citizens, many of them professionals with whatever we mean by impeccable reputations ‘above suspicion’ – one described as ‘looking like a perfectly normal person’, accessing websites with credit cards which, among other things, showed ‘footage of six-month old babies with their hands tied behind their backs involved in sexual activities with minors.’


‘According to the International Centre for Missing and Exploited Children, over 100,000 images of children being sexually abused have been posted on Greek websites over the past three years, while the Greek authorities have made over 200 related arrests’

Thus is Greece part of the rest of Europe and, to make my point about collective grasp of different specific horrors, after a brief and bizarre foray into suggesting they were a result of satanic practices, a great number of people understand that these repellent acts are those of all too ordinary humans, driven, like the Nazi’s, by generic human desires – in one case driven by a startling new ideology at a time of deep economic depression led by a sane enough fanatic with whom millions colluded, and in the other and, I suggest, more digestible evil, by organised crime, aware of its markets, sponsoring the filming of depravity for cash among the oppressed of the world and distributing it via the internet to spiritually impoverished holders of credit cards. The raging driven success of the Nazi programme led a number of British policy intellects, after Dunkirk, to say that the second world war could not be about simply defending and existing idea – especially since the post-first war economic machinery had so spectacularly failed and done nothing to create a world, much spoken of in England in 1918, ‘fit for heroes’. Something must be invented that matched the vigour of Fascism or Communism – whose epic encounter at Stalingrad was probably the pivotal battle of WW2. This had to be democracy’s second chance – a system and philosophy of government that could not only survive and defeat fascism and resist communism but also replace with new policies, popular consent and civic competencies the failures of its predecessors. This was to be the European invention of democracy and peace into which I and a thousand other innocents were born on 29 March 1942. 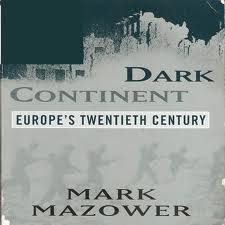 Email ThisBlogThis!Share to TwitterShare to FacebookShare to Pinterest
Labels: Mazower