Here are various papers and handouts with links to downloads. If there's a problem accessing any of these, contact me at simon@baddeley.be and I'll email requested copies.


Abstract: In the context of evolving video technology since the 1980s, Simon Baddeley has been refining methods of accessing the way politicians and managers work together. Since 2007 the latter has continued this research in collaboration with Martin, using film to investigate the interpersonal dynamics built in to political-management ‘conversations’. As well as contributing to theories about the leadership in government, this research has produced stimulating training material, used in UK and Australia, to increase skills, and explore values, among local government practitioners negotiating the overlap of political and managerial responsibilities.

The linked papers can be downloaded via Google docs. E-mail about any problems with downloading at simon@baddeley.be
* * *
A while ago I had a chat with Professor Tony Bovaird about ways of making the subject in which I've been so interested for so long - constructing trust in government - easier to follow; more accessible. Could I combine text and illustrative video on the web to share, as we've taken for granted we can share writing and graphics? It seems easy enough these days - so long as those involved allow it and those interested find it useful. Government and companies are using YouTube, Schools on campus have been webstreaming lectures for a few years, local councils are filming their meetings. This isn't new.
So here's a transcript of a short extract from a longer conversations between Sue Smith when she was Leader of Woking Council talking to Ray Morgan, its Chief Executive. Below that are some references, and some thoughts on political-management - howgovernment is made in that conversation - and on reading, followed by film from an in-house workshop on constructing trust:

Ray: The strange thing for me is that that if if you take – depending on how far away from me somebody is, the further they are away, when they meet me first time, about how that discussion’s going - Sue: Hm R: - if I haven’t said who I am and exactly what my role is they’re not sure whether I’m actually a paid official or a politician, and that’s been a fascinating kind of - S: Well I think that’s only because you’re more overtly like that. Actually when I think talking to chief executives that I know now they’re all extremely politically astute, and I don’t see how they could fail to be other than that - em - in order to function properly. R: But - what I would call the dinosaur regime – officers are in this box and members in that box. The reality is - S: It doesn’t actually work like that. R: - the leadership is in this trading zone. I won’t call it grey zone. I call it trading zone because that’s exactly what we’re doing. We’re trading off what’s possible administratively. S: Yes R: What’s desired politically - S: - ically R: - and how are we going to get a balance where we’re both going to survive. S: That’s right. And se - R: Sorry to describe it that way. S: - selling it back down the line both ways as well. R: Yes

[YouTube version of a longer clip from the same conversation]

[...and here's a link to further extracts from films made over the last 25 years of politicians and managers in local government discussing their working relationships]

* * * *
Ordinary things
Cycled up the Soho Road to tick boxes - get printer ink, look in shiny shop windows, post a letter, see Hector at the Library 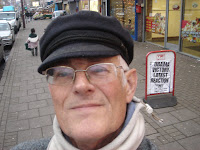 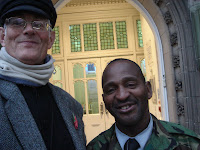 and shake hands, then into town to buy a rail ticket to the Highlands over New Year, but found I was still outside the concession zone ("£130, with a senior railcard, return to Inverness on a journey that usually costs £75 - dearer than flying!"), then gave blood (a process so simple I wonder we suffer shortages), then, after a call from Rajinder, took a Metro to Handsworth Booth Street for a late lunch turning into high tea then supper at Sangams, with him, Natasha and her mum, Darshan (got laughing about marriage - "three rings - engagement, wedding and suff!" "Marriages are made in heaven - so are thunder and lightning"; Elizabeth Bennett's anger at Darcy's condescension, inventing the subversive idea that love and marriage should go together. Rajinder, an artist "to make my living", spoke of 'bang bang' painting vs. cool painting, Francis Bacon and Jack the Dripper vs. Mark Rothko and, because Rothko had said art needs gods and monsters to speak to us we compared Hindu and Christian views of good's relationship to evil - a long marriage or a protracted battle - "no, both!" - which got us on to the Mahābhārata and the taxi driver in Rajasthan who ran Lin and me through the mighty story while dodging traffic between Tikli and Kesroli a few years ago) then on to Soho Foundry Pub in Smethwick for a meeting of The Friends of Black Patch Park, 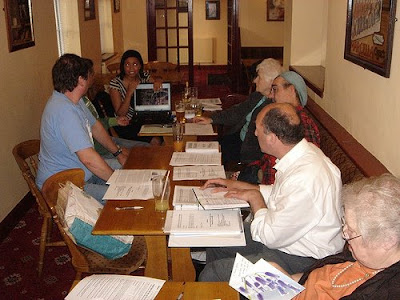 where I chaired an inconclusive discussion with Phil, Harjinder, Stacey, Andrew, Barbara and Sue - old comrade troublemakers. Unsurprising, given Sandwell's funding famine. Park's saved but but now what? As for the VJ 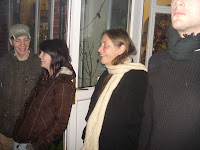 A. I'll give it a week and see what trans

pires. Cycled home and there arrived Amy and Guy and Liz and Mark with fireworks - rockets, bangers, roman candles - which Amy, being police, took charge of lighting in the garden. We watched a few pounds of explosives brightening the sky of Handsworth. Oscar dog, far from being fearful of the noise, has to be restrained from hunting and attacking its cause, so was kept indoors for the show.