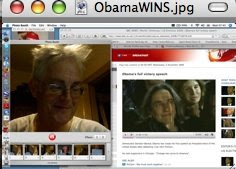 They used to say that a black man boxing a white man could only win with a knockout - otherwise the points could be fixed against him. But this is a points victory for Barack Obama - returning intelligence and courage to a blighted presidency. He won through brilliant campaigning. He won because people registered to vote who once would not have, and because people who once would not, cast their vote, and because, this time, the electoral process proved unassailable. Barack Obama is their new President because enough Americans wanted to reinvent their country. Napoleon, the autocrat, said dreams are ten times more powerful than materials. This is how politics works. This is a democracy - the worst form of government, except for all the others, with a gracious and honourable concession speech from John McCain; with President Bush promising co-operation to Inauguration on 20 January 2009, speaking articulately and generously to history [tho' see and this]. My scepticism at the scale of problems (Obama speaks of their "enormity") no government, nor governor, can be expected to solve will soon return - but in the meantime I rejoice, eyes brimming, heart full. Dignum et iustum es. I phoned my brother George, at a ridiculous hour of the morning, as I needed someone with whom I could share my happiness - a childish joy in the dream of one good leader - when in the full light of day I will know again, that no-one can or should ever donate their part in the impossible task of making democracy work. Before nine my dear friend Z phoned. She and I rejoiced together "that we've lived to see such things..." We discussed the great difficulties facing a new government in America. I recalled the words of William Cecil, wisest of Elizabeth Tudor's shrewdly recruited advisers, "Win hearts, and you have all men's hands and purses." Z e-mailed a moments later:


Simon. After all these years, it feels so good to have friends that I can share this joy with. I am going to have a great birthday and year. Whatever lies ahead, if he is prepared to face it with cool collectivity, I will too. Speak soon, Ziggi

So much hangs on the political-management arrangements, but I do believe I shall see a White House that reopens doors deliberately closed to the wisdom of America - 'cool collectivity'. It's a damp grey morning but one fine day. [See speculation on an Obama Cabinet] John R rings - pedalling into work. "Remember how on that dreadful day in the pub in Bristol - you feared the Bush administration would treat this as the work of 'enemies' rather than 'criminals'; as an attack on America - despite the international victims - rather than an attack on democracy" "This is so good...this night" "A return to intelligent government" "Courage replacing fear" "We always seem to be in touch at great moments! Thanks for phoning." [If 'enemies', we'd see America vs. 'her' enemy, while 'criminals' would mean alliances to punish a crime, against thousands, and remove its causes] Mum - born 1917 - spoke to me from the Highlands. "Wonderful wonderful news. So good, so good!" she said " I watched through the night. I can hardly speak. I'm so delighted." I phoned Nick B. We talked, not only of our pleasure at the election result, but about our mutual interest in the technologies of communication this one has let loose - broad and narrowcasting married - making a national event globally involving; actively, rather than passively, engaging. Twittering, forum chats, e-mails, hyperlinked blogs, embedded podcasts, video play and replay on hand-helds and laptops, through to formal commentary on multiple TV channels and, later, in newspapers. For a few hours all the world marched along Democracy Street. * * * It's past one in the morning. Lin's knitting a scarf for a miniature seagull. Pennsylvania - where Obama made the finest speech (link with transcript added 26/11/08) of the election - has gone blue. I'm off to bed. Lin over her knitting - "Come on Baddeley. He was always going to win. It's foregone". ["Democracy is coming to the U.S.A" - music and lyric 'download as a ringtone?' - oh dear] [Back to the future 20/11/08: Obama's rhetorical talent 24/11/08 Team picking decisions - balancing being elect and inaugurated (video unavailable 21/12/08)]