In the Highlands - 'love, let us be true to one another' 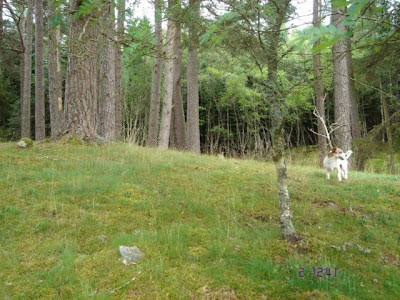 In Strath Nairn at Brin Croft above the River Farnack for a week and a bit. The train left Birmingham at 11.00 am and travelled 450 miles north via Glasgow. Oscar came with me and helped quiet a number of crying children on the journey. I had a cigarette while strolling between Glasgow Central and Queens Street Station and was collected from Inverness Station at 7.35 pm by my mother's carer, Sharon, who drove me up to Inverarnie. There's quiet and the pleasant drowsiness that goes with this place. Oscar is delighted to be in the company of other terriers, running through mossy woods, heathered braes and damp grassy meadows, chasing scents. I enjoy rail travel.

I'm vexed by our trains. Sealed windows lost us fresh air. Unreliable air conditioning replaces adjusting windows. Gone is the opportunity for farewells; to kiss, touch, and step into the carriage even as it starts to move, waving for as long as you stay in sight of one another - and after. The ends of platforms where once one might have waited, apprehensive and excited, for an arriving glimpse of a familiar face peering then smiling from an open window, are empty. Watching an Edwardian drama on TV, Mum and I were musing over all the people we were not supposed to marry or even befriend once - people who are close family who might have been lost because of class, religion, or ethnicity. How can I moan about trains while free of those idiocies, proud of grandparents and parents who wouldn't stand for them and broke the rules? * * * Plutonium leaks at Austrian plant Gruesome crime shocks Greek isle Grisly murder aboard Greyhound bus in Canada Woman's baby cut from womb Police charge man in brutal deaths of two French students in London EastEnders star Brooke Kinsella's brother stabbed to death 7 dead in stabbing spree in downtown Tokyo after attacker drives into a crowd British government vows tougher knife laws after spate of teen slayings Noel Gallagher says "knive-wielding scum bags" are taking over Britain * * * I doubt dreams are prescient but they do reveal states of mind. I woke this morning from a nightmare in which I was signing a register in a large municipal building to claim a death certificate for my daughter. The clerk had pencilled 'Amy' where I was supposed to write more detail. As I reached over the form with my pen I sensed - as did the clerk on the other side of the desk who began to raise a Samaritan hand - an avalanche of grief gathered like a rogue wave that froze as surely as a computer crash. I was awake. Oscar had jumped on my bed. I showered and dressed and pondered how myriad synapses, picking up activities in my brain, had fed this into my dreaming mind as an event among the two most dreadful I could imagine. I don't find it difficult to conjecture causes. We live with the debris strewn by the kick-ass in the White House. I have my attention drawn to things like the horrors in the news that, because they are remote (though I was enjoying busy Akihabara a few days after and this local blog says much about separation), and Amy encounters their aftermath in her work in Birmingham, but these are not the main movers, not even the many speeded up videos on YouTube of receding ice and the rude and messy squabbling about whether it's us or nature, or a mix of both, that follow. All that flitters easily through my mind. It was the accretion of feelings that gathered with Mark lending me a book when we were in Ano Korakiana the other day - Alan Credland's A Land Beyond Belief. Then, up here, seeing an edition of Charles St.John's Sketches of the Wild Sports and Natural History of the Highlands - a 7th edition published in 1878. 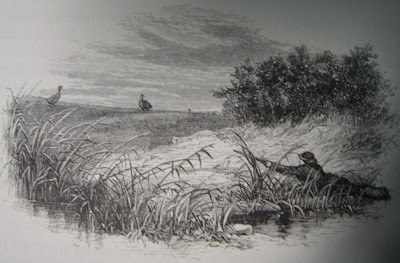 Jack said the Japanese say 'to be angry is to make yourself ridiculous'. We mock public anger by referring to Grumpy Old Men. Grumbling is wasteful. The Aussies are on to something when they refer to 'whingeing poms'. Charles St.John's book is a pleasure to read because he has no idea of what' s going to happen to his world, or rather he writes as if that were the case:

"I am one of the unproductive class of the genus homo, who, having passed a few years amidst the active turmoil of cities, and in places where people do most delight to congregate, have at last settled down to live a busy kind of idle life...Though by habit and repute a being strongly endowed with the organ of destructiveness, I take equal delight in collecting around me all living animals, and watching their habits and instincts; my abode is, in short, a miniature menagerie."

Alan Credland wrote - just a few years ago - a book of melancholy for the loss of winter stubble, salt marshes, winding tide creeks, field ponds, unploughed pastures and small fields - often replaced by rape - hectares of dazzling yellow, towering pylons, lost place, loomed skies obscuring the celestial night - all made trickier to deal with because city visitors, following the heritage signs of a commodified 'countryside', are mostly blind or indifferent to the devilish details of such seismic change. Some of the many who've bought into a constructed rural idyll now complain about mud on country roads, noisy stock - especially cocks crowing - and church bells. Credland isn't angry. What I think is important is not to hold on too hard to the externals. Age makes change more apparent.

Mum and I went to the Highland Field Sports Fair at Moy on Friday and Saturday. We greeted friends in the committee tent - hugs and kisses, tea, cake and sandwiches, in the background the cracking echo of shotguns. Shopmobility provided an electric scooter that carried mum around the many stands. Long ago her husband, Angus, was an originator of this annual event. I bought a couple of cured rabbit skins for Teal's dummy. Never was there more equipment nor more information available for enjoying the worlds described by Credland and St.John, and yet here those worlds have gone, in all but facsimile - with game reared and shot for employment in the leisure economy, deer culled for their own protection, most fishing the result of stocking. There are niches - few and secret. 'Field Sports' are set up against 'Blood Sports' - one group of city folk making a symbolic stand against another group of city folk, with those who work the land picking up what they can while hiring, from the further reaches of Europe, men and women willing to work for wages on a land designed, until very recently, for concentrated food production. (I've been reading Rose Tremain's latest - The Road Home) Even so a streak of violet pink, from a field of rose bay willow, seen from the car as we drove to Alturlie Point yesterday, to walk with the romping dogs beside the tranquil Moray Firth, reminded me of the proliferating growth of set-aside. Change is puzzling. What I feel is separation from the ground - through my own ill-education about it; because I don't work on it, and hardly ever did. This is why there were tears of happiness in our urban eyes as we gazed on Emily Kngwarreye's work at the Tokyo Art Centre a few weeks ago. This blighted creation is what Chatwin traces with such witty curiosity in The Songlines. This is what Paul speaks of in his biography of Jack - the rift between us and the land and its denizens. I struggled to write of this over ten years ago in Internal Polity. It's a recurrent recognition of lost place, unarticulated, outside popular sympathy, a quiet unexpressed, and so repressed, bereavement - hence this morning's waking nightmare. 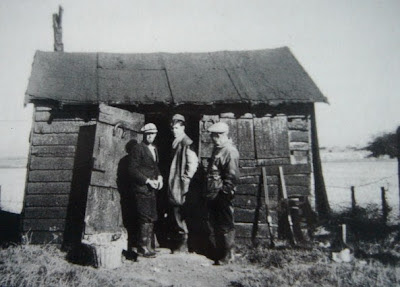 At least four of my relatives are heading for Beijing; two via the Trans-Siberian railway - bound to witness great events, great spectacles, China rising and the smog around the magnificent 'bird's nest' stadium is a potent symbol of the way we are fouling our own nest far beyond China (I've collected 1788 images for the Flickr group International flytipping). 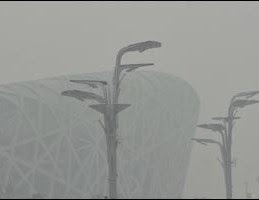 I embrace the rift of modernism. Existential angst is the self-chosen price for devotion to the daemonic mysteries of science, committment to evidence based policy, faith in scepticism and enduring doubt. No other route is really on though, a bit weary at times and, prompted by dreams, I like to dip my toes gingerly in the sea of faith - wrap myself in the folds of its 'bright girdle', and of course, there are visitations.

...on Poros, the villa Galini, where, distracted and overcome by the beauty of the landscape from his windows, Seferis had difficulty writing. About this he wrote 'Life is so beautiful that if Homer had not been blind he would have written nothing.' 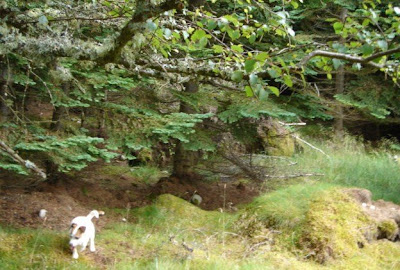 If with the tongues of men I speak, and of angels, Love I do not have, I have become a gong resounding or cymbal clanging. And if I have the gift of prophecy, and know mysteries all, faith mountains move, Love I do not have, nothing I am. Love is generous, virtuous, Love does not envy, boast, not proud is. All she protects, all she trusts, all she hopes, all she perseveres. Love never she fails. Be it prophecies, they will cease, Be it tongues, they will be stilled, be it knowledge it will cease. So remain, Faith, Hope and Love, these three. But the greatest of these is love

The musician is Zbigniew Antoni Kowalski (also called Preisner). The soprano is Elżbieta Towarnicka, singing in Greek. The song is for the 'Unification of Europe', based on the Greek text of 1 Corinthians 13, from a film by the Polish director Krzysztof Kieślowski's - Three Colors: Blue

Received via YouTube from kotera18 on Sunday 10 Aug (I've thought about this before):