The wood stove is working! 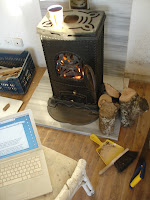 Just before sunrise on Monday morning I checked and found the fire had stayed in overnight. The logs are seasoned, from a truckload I’d bought and carted down our steps and stacked in February last year. G and M had carried them from beside the house where they’d have got soaked and stacked them in the apothike from where I carted six logs upstairs last night. I placed an olive log on glowing embers but saw I needed smaller logs. I made a cup of tea, fetched a dustpan and brush, and a handsaw and put on socks and pants and brought the laptop upstairs. The embers needed coaxing but until fire flamed, smoke came from the door and lid when opened. I didn’t want to spoil a growing ash bed with the riddle and was wandering whether to open a window to increase the draw when I spied a flame. I opened the front. The fire spread, muttering and clicking. I drank my tea, basking in the enveloping warmth. The bedroom door was open to spread the warm for when Lin dressed. Bright sunlight leaks through all the eastward windows. Shadows of invisible smoke rise twirling beside the shadow of the stove on the white wall. I assume it’s very thin smoke off the paint of the stove that will stop in time, or does a sun so bright make shadows of the heated air? More vexing right now is a foot long crack in the marble slab behind the stove. Was this made by too much heat behind the stove; by a flaw in the kavalla? Will it extend across the rest of the slab? We need to get to know the stove; the effect of its placing in the room, how its heat spreads, our choice of fuel, the weather, the design of the flue – inside and out. In the room is a thirteen foot stainless steel tubular radiator too hot to touch and already turning iridescent, adding to our warming. Yesterday morning condensation in the flue dripped brownily on the floor from the horizontal joint closest to the wall. Heat from embers prevented that this morning. Olive creates a lot of tar and we help create a market for olive wood – the tree whose abundance is part of the island’s character. I was assured this load came from the trimming of local trees every two years, but we’d prefer to collect the generous amounts of discarded wood we see by the road and along the shore. One day, not so far in the future, people will mock us for not knowing how to use the sun that shining so dazzling on us in the depth of winter to warm our homes. The kafenion here has two solar heating panels facing south west beside its terrace – as an example to all who pass.
* * *
There are so many small birds frolicking around the gardens and the robins are numerous and allow you to get within a few feet. We wondered if the shooting sends them into the gardens and empty buildings of the village like some modern agriculture in England drives country creatures into the city using the canals as routes and parks, allotments and untended gardens as habitats. D told us the other day of a worried man who’d wandered up to the place they’re making a house below Ano Korakiana and asked, in English, if they’d seen an animal he was seeking. “It has a dark voice and…” – making a swift gesture as though combing back a quiff and “a chi!” – pronounced hard. Could this have been a badger, or the particular character of a missing dog?

* * *
Sunday morning, reckoning the mortar dry round the flue hole in the wall, I light our stove. It warms the main upstairs room. We drop in on a table top sail at Drifter’s Bar in Dassia and buy cutlery, china, pictures, a mirror and a four foot long hand-made hand-painted papier maché parrot on a stand. The breeze from the north chilled us even in direct sun creating the clearest of views across the channel as we passed through Ipsos. 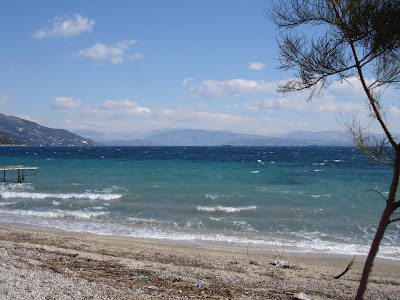 Once home we finished work on the guest bedroom door and hung it with glass replaced, between the kitchen and the downstairs bedroom. In the evening with the temperature falling below freezing the stove warmed the whole house. 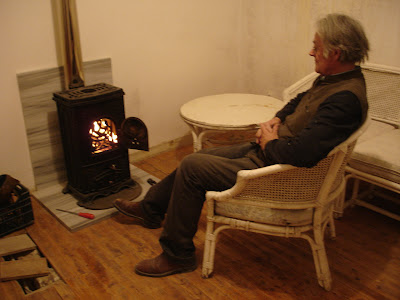 We sat and gaze at the flames listening to the logs, which I’d brought up from the apothiki, crackling, inhaling the slight waft of wood smoke. It’s only a week now before we return to England for five weeks.

* * *
Sunday morning: The sun rose into a watery sky. There was a shower in the early morning. Lambros and one mate arrived at 9.00am. This confirmed my learning that you need to be on the spot with any building. Not because of dishonesty or incompetence but because work on houses, like surgery, requires regular revision of original plans because of the inconstancy of materials and settings. A flue tube as just too large to fit the second bend poking out of the wall. Our spare tube is needed and another cut with the grinder. Another fitting is too loose.
How to make it stable? 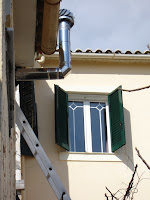 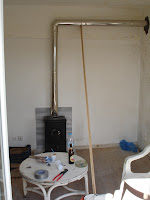 Our longest ladder is almost impossible to position safely in Leftheris’ garden. One more rung of extension might have made it possible but there’s a safety fitting that makes extension that far impossible. Rightly so. We find one acceptable position, which is OK to insert the pipe and chimney top and mortar the outside part of the hole made for it, but not to drill for a bracket to hold it. Lambros asks for wire. He finds the right stuff off the neighbouring waste ground and fixes the flue to the same bracket as the gutter’s. I hold the foot of the ladder like a limpet while Adoni hands Lambros mortar through an upstairs window. Meanwhile Lin’s putting a coat of varnish on the conscientiously stripped and sanded and filled door for the guest bedroom which now has a worn surface of ancient eau de nil lacquer with wood showing through that interior decorators enjoy crafting and lovers of the new regard as scruffy. Then upstairs Lambros and Adoni are straightening out our drunken archway – with render. 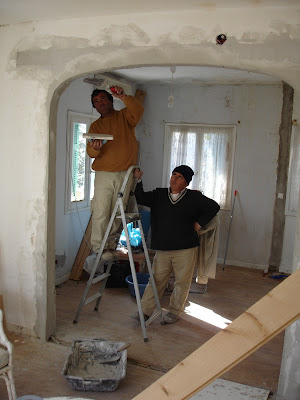 I’m on the phone to Paul. “Is there a difference here between mortar and plaster?” “Not really. It all depends. We tend to go for a slightly knobbly finish.” “OK. Thanks.” Later when Aln trying to restore the upstairs downstairs two-way switch he finds a two-way switch but no wiring leading upstairs. “Where did it go?”
Posted by sibadd