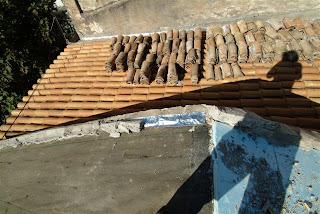 ... meanwhile back at 208 Democracy Street the roof is being re-repaired amid accounts of chill winds, rain and lightning. Phone bills mount for calls to Greece (Skype at our end doesn't connect to anyone we call yet), images go back and forth by Broadband. We sit at the kitchen table peering at these and discussing by speaker phone the minutiae of what has and hasn't yet to be done. I said to Lin 'You know we keep thinking life will begin when the roof is done, when actually, getting the roof done is life...and the electrics, and the new fireplace and flue, and the floor, and the new window sills and the staircase and bannisters and, and, and...'

Clearly I shall have to force myself to go out to Corfu next week.

* * *
Time appears to be resolving the Corfu Knickers Crisis. Invasion has been called off and the state, while saying nothing, seems to be agreeing discreetly to drop the matter. That the knickers were hoisted under and not over a Greek courtesy flag weighs with the Court as does the fact that they were taken down so willingly.
* * *
The same may be said for the Corfu Frog Farm dispute. Achilles' apology for criminal assault has been accepted by the court. He's withdrawn his civil action for frog nuisance. Conditional peace exists between neighbours. The frogs sleep with the fishes. It rains and thunders in Corfu - though you wouldn't know it from the photos.
* * *
Dh is now settled near campus, attending lectures and starting a dissertation on the role of faith in the formation of local government in post-Saddam Iraq - a subject about which his insights will be unique, though historical, since fieldwork will be impossible. The various ritual of temporary residence and studentship have been completed - reporting to the police, starting a bank account, getting a SIM card, a printer scanner, registering for post-graduate credentials to use the library, the internet and to access study space and other campus privileges.

Athens News Agency: Prokopis Pavlopoulos inaugurated the annual conference of the Central Union of Municipalities and Communities of Greece (ΕΤΗΣΙΟ ΤΑΚΤΙΚΟ ΣΥΝΕΔΡΙΟ ΚΕΔΚΕ (ΚΑΣΤΡΟ ΚΥΛΛΗΝΗΣ, 14-16 ΝΟΕΜΒΡΙΟΥ 2007) KEDKE - the English Language version of the website has little yet) at Kyllini Castle in the Ilia Prefecture on Wednesday. He spoke of 'creating strong local administration at the service of the citizen, with firm resources and a development orientation that constitutes an active agency of local democracy and regional development.' On administrative reform, Pavlopoulos said 'the new administrative division of the country can only result from a wide dialogue with the local administration's collective representation bodies...this dialogue has already begun during our previous tenure and it is continuing on the basis of the creation of stronger and more effective local administration organisations.'
Posted by sibadd