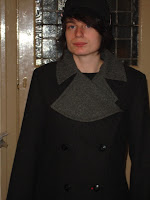 Amy's recovering from a tooth extraction. G asked her the time of her appointment. 'Half past two'. 'Trust you, Amy, to have a tooth out at 2.30!' Tooth hurty? Ha ...
* * *
I was in Nottingham on Tuesday, with working friends, planning ways of taking forward ideas about political-management leadership. Lunch included a fruit salad. To eat this, the women with the trolley and a northern accent, asked if we wanted 'a small fork'.
* * *
On Thursday evening, returning from a workshop in Taunton on politician-officer working, I noticed Ben Bradshaw waiting for the train to his Exeter constituency. It's pleasing to see a junior minister of state - last spotted from the Strangers' Gallery - with a bicycle. This morning I was teaching on campus. I completed the day with a meeting in Telford to plan a questioning skills workshop for scrutiny councillors. Now I'm moderating sixteen essays on scrutiny in connection with the very successful Oversight and Scrutiny Module run by my colleague Andrew last week, to which I contributed with sessions on constructing trust, questioning, chairing and weighing evidence.
* * *
I am getting hints that an injustice done to my friend Z earlier in the year may be on the way to being reviewed. She it is who's providing a guest room for Dh who should be flying in from the long nightmare of Iraq on Sunday.
* * * 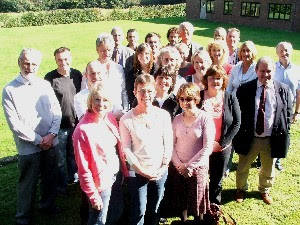 I've got that slightly jaundiced feeling of worry about paying out too many rather large bills but I've also had a really good experience contributing to my colleague and friend Andrew Coulson's five-day Oversight and Scrutiny module in which I've done three half-day sessions with a stimulating bunch of bright enthusiasts from authorities across the country. A's asked me to moderate their first set of essays - all interesting, making me optimistic about the quality of thought going into evidence based policy making and respect for the idea of a member driven process. I'm right at the back of the photo taken at Priorsfield the other day.
Posted by sibadd