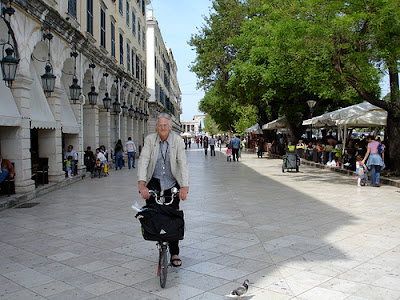 Lin took this photo in April 2007. She didn't tell me to tuck in my shirt. The Liston is what some, trying to emulate its character, would call 'shared space' or a 'living street'. It's a kind of perfection - old but not a museum, grand but not big. When crowded it's full of intimacy. No cars endanger children, or pollute it with smell, noise or impatience, yet the Liston's easy to get to by sea, road and air. The Liston is a place for walking and sitting and talking and gazing around. It connects to the sokaki - Corfu's intricate back streets - and to the grand square, the cricket ground and the sea. It's open to the Ionian sky but has ready shelter from its generous rain. It is private space where people have homes as well as offices - full of thriving interesting business - and it is a public space that takes civility for granted without pompous notices; an agora for all and an avenue for secular and religious celebrations of joy and solemn gatherings at times of sadness. It stands on its own connected to everywhere. Even the pigeons like it but, unlike similar spaces in other lands, don't seem to mess it up. Dogs enjoy it similarly, sharing it with their brethren cats. Good men (like one you can see in the middle ground of Lin's picture) do its housekeeping.

It's just one part of Corfu’s Old Town which has just been named a World Heritage Centre (WHC) by UNESCO's ICOMOS, who've described it as a special architectural landmark. What's so significant about this - apart from the fact that the global competition to be a WHC is intense - is that this is a recognition of Corfu's contribution to modern rather than classical Greece. Few would question listing such ancient places as Bassae, Delphi, Mycenae, Epidaurus, Olympia (places Dad sent me to see on a mini-bus tour in 1957) and the Acropolis (which I first viewed through the loo window of Yia-yia's tiny flat in Koloniki the same year) or the early Christian sites at Meteora and in Thessaloniki, or even medieaval Rhodes (which I've not seen), but they were famous long before Corfu's Old Town which really began to flourish in the 17th century as Greeks began their struggle for independence.

There's a risk of pickling a place in 'heritage' [UNESCO declares the town as having 'high integrity and authenticity'] but it's not as if modern Greeks or British aren't used to commodifying their past to import new world dollars into post-modern economies. Tourists are harvest. But this long sought recognition might reverse a balance tipped towards Greek Lopakhin's in their work of chopping down Greek cherry orchards to make dachas for people like us in favour of other Greeks striving to be more creative and kind to their land while still welcoming visitors.

I read in Kathimerini that what impressed the judges in New Zealand was the Minister's of Culture, Giorgos Voulagarkis' management plan. Amid loose canons such schema may seem dry and wordy - the work of teams - but they can be a charter for sustaining a place's locus genii counterbalancing the corrupting charm of the Lopakhins - what we are beginning to refer to as 'place-shaping'.

Speaking as one who first glimpsed Corfu through a tiny window across a crowded plane, this is an island without insularity, while its capital, no larger than an English market town, feels like a city - part of a polis, inseparable from the island that shares its name. Corfu's position and conformation makes it strategic, attracting invaders - some, like the Ottomans, repeatedly repelled, some occupied, some embraced and some survived. Its beauty seduces visitors - scholars in love with old marble, rich birds of passage, coach class holiday makers common as muck - some passing through stay longer than intended, some keep returning, some never leave and Lawrence Durrell exiled by war wrote of 'an amputation' [e-mail/n*m*s*) for which 'all Epictetus' could give no consolation.

From latest edition of Kathimerini

Parnitha protest rallies
The fire that devastated Mount Parnitha last week has sparked a response from the public. Those who want to add their voice to the chorus of protest can join a walk this Sunday on Parnitha, organized by the Pan-Attica Network of City Movements. The group held a rally outside the National Technical University of Athens on Tuesday to protest the actions of successive governments which they say have paved the way for unprecedented ecological damage. Fires, they say, are typically followed by land-grabbing, the redesignation of forest areas as farmland, and house construction, both legal and illegal. They urge the public to take action and demand legal protection for forests, reforestation and fire protection, as well as a stop to construction in forests and public open spaces. The meeting point is in Aghia Triada, and the walk starts at the Mont Parnes teleferique at 9 a.m. A coach will leave from outside the Hondos department store in Omonia Square at 8 a.m. (For information: tel 6974.775.279, 210.995.4362). And there’s another protest to take place on Sunday at 7 p.m. in Syntagma Square.

[Back from the future ERT-gr 18/7/07 and Greek News Agenda: Georgios Souflias, minister of Environment released to the public the tragic numbers of the burnt land of Parnytha. 56.000 out of 300.000 square meters of the mountain part ot Attiki and Viotia were burnt. Mr. Souflias stated that reforestation is going to be declared next week for the burnt land. A Presidential Decree was submitted according to which the State Park is going to triple.The park will be enlarged and monitored to prevent encroachment. “We are aiming to organise Parnitha in exactly the same way a national park should be organised: With observatories, roads, capable personnel, adequate equipment, with all the means necessary to confront fires or land-grabbers,“ Souflias stressed. The minister added that an amendment to the existing law would allow authorities to demolish swiftly any illegal buildings found in the fire-charred area as well as any new constructions that may spring up in the future.] 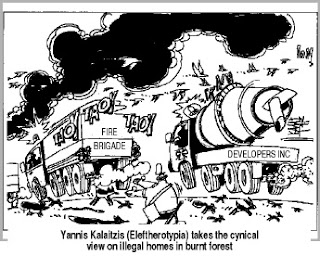 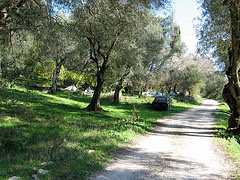 "I want an olive grove!" said Lin "Have you seen all these olive presses for sale?" She was scanning the copious Corfu property pages. The old ways are up for sale. "Who's going to work it?" I said. Modern olive cultivation involves syndicates, distribution centres, mechanised bottling and packaging techniques and a pair of jaws on the back of a tractor that clasps and vibrates the trunk to shake the olives into a big upside facing umbrella - while the children of the black garbed farmers are at university studying to be scientists, doctors, engineers and lawyers and agronomists who'll be inventing further mechanisation for the industry, genetically modified futures for the olive and wondering where to buy their second home, and buy organic food from a farmers' market.

I see Katherina, who helped demolish one of ugly breezeblock walls beside 208 Democracy Street in April has her maisonette on the opposite side of the road for sale for €75000. She'd told us as much when we made a second visit with a mind to purchase 208 last November."if you don't want that one, buy mine!" she'd said showing her cosy room opening straight onto the road. Where will she go if she sells. Who will feed the cats?

I remembered something about that room onto the road, so full of things on floor and wall. 'Greeks decorate their rooms so you don't look at the ceiling'. Who told me that? I know the same person who told me the statues on the Parthenon were painted flesh coloured, red lips, eye-liner - the lot. Nooooooo! I've got to get it out of my system that everything Greek's got to be 'distressed'.

A youthful tourist is gazing towards the horizon where smoke rises from a hundred forest fires. The camera pans and zooms to close up. We see he was waiting for a recalcitrant autocash machine in Skiathos - a Mediterranean Island near Greece in Europe. The machine refuses to disgorge his cash. He curses; pounds the screen; gestures to the long queue behind him offering unintelligible advice in Greek - clearly foreigners. The same happens to a visiting couple in Zakinthos - also linked to Greece. A family on holiday in Rhodes, near Turkey, are left with nothing but English small change. Will Dan Brown's next blockbuster be a secret conspiracy by millionaire Oxbridge philosophy dons to show that the ancient Greek philosopher Socrates from Athens, Greece, wasn't required to take poison by the Democrats (largely digitised) but was murdered. The brilliant genius's dying words "Crito, we owe a cock to Asclepius. Do pay it. Don't forget!" contained a hidden formula for the machine code of the world's first analogue computer, designed by Socrates for Philip of Macedon (Macedonia - but let's not go into that), from whom it was stolen by his assassins, who gave it to one of his son's henchmen who used it after Alexander's death (in suspicious circumstances) to construct the incredible machine using a local Persian craftsman (bit-part for Sean Connery) so that he and his soldiers could make their way back to the sea from Afghanistan (epic journey) where it disappeared to be stolen, centuries later, from the beautiful but reclusive Ada Lovelace, by the secretive Democrati clan, who observe ancient psephological rituals celebrating their original plan to use Socrates' invention for its 'true purpose' - a computerized voting system that could have prevented the Peloponnesian War and saved Greek Democracy from destruction. That noble goal has been diverted over centuries by envy and ambition into a mission to develop a super computer with which they can subvert the global circulation of credit, in order, in their own perverted minds, 'save the world'. The film will have the 21st century hero Professor Derek de Sola of Yale played by Tom Cruise (Harrison's not Greek enough and he's getting wrinkly and we need bedroom scenes) who is approached with the story of the Democratis' perfidy by Ada's beautiful great great grand-daughter - also Ada - who discovered a coded diary in a box of her ancestor's papers. Together they set about unravelling the truth of De Sola's Greek ancestry and the incredible secret that lies at the heart of the disassembled Antikythera Device to show that though it was designed by Socrates it was stolen by his pupil Plato (played by Gary Oldman - wait, we need him for Alcibiades) who poisoned him (bugger, there goes the plot) so he could use it in the creation of his 'True Republic'. Socrates had realised that Plato was programming the AntiKythera Mechanism to reject the ballots of 'wrong voters' who threatened the integrity of his perfect system of government. .. (continues) To find out more about the terrifying connections between ancient Greece and threats to democracy that reach into the Oval Office and 10 Downing Street see "The Phaedra Option". Buy the book of this year's blockbuster and its prequel - 'Phaedra' - where the original secrets of the universe have lain unrecognised for thousands of years, until the author discovered a moth eaten copy 'in an old Jewish (another celebrity bit-part - but does Schwarzenegger look Jewish enough? ) bookshop on the banks (sic) of the Seine'. "Believe me said Brown to a packed audience of his fans 'It's beautiful. it's bright and it's very shiny!'"
Posted by sibadd