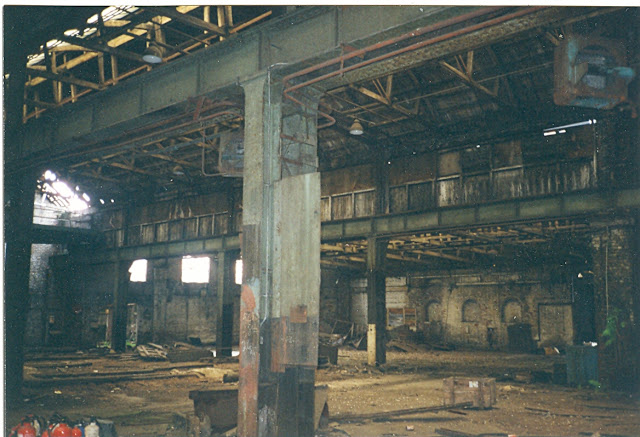 The Soho Manufactory (etched) and the Soho Foundry (Ted Rudge's photo) were part of a Silicon Valley of the 18th century, drawing people from over the world to work and live.
Matthew Boulton and James Watt needed the foundry to build the steam engines to power the engines of mass production of buttons, buckles,toys, silverware, ormolu and the minting of coins and medals at their Manufactory. Yesterday morning the Friends of Black Patch Park visited Soho Foundry and the private weights and measures museum of Avery Weigh-Tronix, guided by John Doran, archivist. Ted Rudge, the local historian came along with Andrew Simon, our secretary and about six others of us, curious to learn about this neighbour of Black Patch Park.
Now that Sandwell Council has backed off plans to build on the park, its future is tied to theirs and their partners' plans for the remains of the foundry. John is optimistic about the creation of a site of industrial archaeology, with new housing and infrastructure.
"Whether we will see it is another matter." 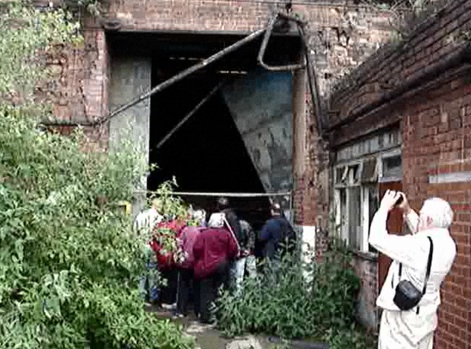 I knew something of the Manufactory - long demolished - via Soho House Museum - but none of us knew much about its associated foundry, despite our many meetings at the pub opposite. Its brick shell is next to the old Birmingham canal that served it - visible through an iron bridge colonised by Buddleia. The canal basin that served the foundry was filled in long ago.
Warned to stand back for fear of falling masonry we peered in at its dappled spaciousness - the grumble of metal recycling in an adjacent yard resonated in the background. We took pictures, asked questions and strolled the surrounding dereliction, glancing south to the tree tops of the Black Patch. 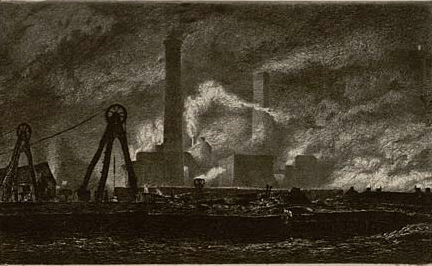 The working site of Avery Weigh-Tronix, HQ in America, has been hollowed out as manufacture has moved to China. It's primarily a site for packaging and transport of goods amid the surrounding industrial wasteland. I imagined a cinematic 'cut' to this area 177 years ago:


'By day and by night the country is glowing with fire ... the smoke of the ironworks hovers over it. There is a rumbling and clanking of iron forges and rolling mills. Workmen covered with smut, and with fierce white eyes, are seen moving about amongst the glowing iron and the dull thud of forge-hammers ... The grass had been parched and killed by the vapours of sulphurous acid thrown out by the chimneys ... every herbaceous object was of a ghastly gray – the emblem of vegetable death...' James Nasmyth 1830

The next day Andrew asked for comments on a draft memo from the Friends' response to the agency leading on plans for the Soho Foundry:


DRAFT - Historic Soho Foundry – Response from Friends of Black Patch Park to questions from ABL Cultural Consulting
1. Industrial heritage of world significance – possible World Heritage Site. For example in addition to Watt, Boulton and Murdock also Muntz, GKN, Tangyes, Averys, Raleigh bicycles, Metropolitan Carriage Works. Also canal history e.g. Telford and Brindley. As a Friends group we would argue that ‘Industrial Heritage Site” include, in the environs of the Foundry, Black Patch Park through which flow the Hockley and Boundary Brooks – used for water power but also marking ancient pre-industrial boundaries. Romany Gypsy history also connected with the park – a traditional site in late nineteenth and early twentieth century’s.
2. Its part in the industrial revolution especially the manufacture of steam engines which were exported all over the world. Industrial pioneers such as Watt, Boulton and Murdock. Murdock lived in one of the cottages that still exist on the site. The Avery Weigh-Tronix museum with weights and measures going back to the Egyptians. Lunar Society – the 18th century equivalent of a think tank which debated social as well as scientific issues e.g. slavery. The Foundry’s links to the wider world e.g. export of steam engines to the Caribbean for sugar production and how this related to Watt and Boulton’s attitude toward the slave trade and slavery.
3. Welcome the proposals provided they are sympathetic to the history of the site and surroundings. Also the facilities should be accessible and affordable by all - compare, for example, Millennium Point which is expensive for families to visit, whereas the old Science Museum was free. How do these plans link to Carl Chinn’s idea of creating an industrial museum?
4. Working exhibits – hands on including working steam engines. Possibility of opening up access from the canal e.g. opening up the original canal basin so that people can approach the Foundry by canal. Exhibits that demonstrate the whole process involved in the production of steam engines and how the Foundry worked – including the working conditions of Foundry workers etc. Something about the general social history of the area including the other industries in Smethwick and also the history of the adjoining park – e.g. the Romany Gypsy connection – perhaps a Gypsy Varda – photographs of the families and their genealogy – see Ted Rudge. Exhibits about the Foundry’s connections with the rest of the World and the implications of this. Also presentations that are forward thinking – perhaps a reflection on the impact of science and technology on society and the process of innovation.
5. Multi-media presentations. Programmes that look at the history of the area as well as the Foundry. Outreach programmes for schools – there are many Primary and Secondary Schools in the immediate area. Oral history – an urgent need to record the memories of people who have lived in the area while this is still possible. For example, people’s memories of the Second World War, memories of the surviving family members of former Romany Gypsies and also the memories of those who have moved into the area over the last 50 or so years – opportunity for an inclusive history. Also Soho Foundry’s global links and the issues that this raises.
Programmes that are accessible to all e.g. ATHAC – Access to Heritage, Arts and Culture – 0121 558 6334
7. Representation on the project steering group
- Possibly an advisory role re development of the interpretation and outreach/community programmes
- Helping make contacts
-Participation in an oral history project
8. A place that stimulates thinking and challenges people. Hands-on. Something that encourages people to examine evidence and come to their own conclusions. Realistic displays about the Foundry what went on their – the manufacturing process – what it was like to work in the Foundry and the surrounding area – what was it like to live there and how has it changed. Working steam engines and examples of their applications. The Foundry’s links to the rest of the world – and its global significance – for example where did the steam engines go – what were they used for – and the possible implications of this. Also something about the park and its historical significance.
9. Bill boards
-Website
-Radio/TV
-Community events and open days
-Libraries
-Leaflets to households, schools, colleges and other organisations
-Local media e.g. papers, radio – Express and star, Evening Mail and Birmingham Mail
10. Heritage of the Foundry and Park should be a significant part of the development
Don’t want to lose the community centre within the park as part of the development
How do the plans relate to the future plans of Avery Weigh-Tronix?
Will there be a transport plan as part of the development? – so that people are encouraged to use public transport where possible e.g. Metro, canal, bus, cycle routes. Also are there ways in which transport systems can be better integrated to make the Foundry more accessible by public transport.
Sustainability in general – how can the development demonstrate best practice in terms of minimising environmental impact e.g. energy use, carbon footprint, use of sustainable materials, water conservation, biodiversity etc.