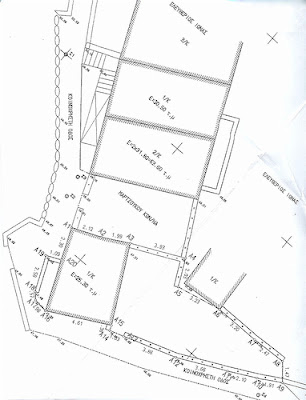 Bank holiday and I've got an intray of things but I thought I'd better just do this. "It's like a boot" said our solicitor at the conveyance meeting at CPA at 15, Kapodistriou Street, Corfu, on 7 February. For a moment I thought he said 'boat' and was confused. "No boot, boot!" So we are putting the rubble from the outside staircase and balcony, so wantonly removed by the previous owners' builder, in the 'toe' where our present builder will finish it with random 'sikis' (Συκης) stone, leaving soil for growing things. The apothiki sits in the heel of the boot, around which runs a steep 100 metre path to Ano Korakiana's lower road and a bus stop. The square above is a veranda under a spacious balcony with its view - one of the good points of the previous owners' ill-conceived improvements, though its woodwork needs strengthening and treating. Then come two more squares that were once separate dwellings but are now joined. The higher one - just before the square of our neighbours' house - had a second storey with two bedrooms added to it and a roof separate from the roof of the dwelling below it. Herein lay problems. The builder had installed no insulation or waterproofing in the roof of dwelling to which he'd added a storey and given it only the slightest slope and failed to make good the seal between the roofs of the previous separate dwellings. He had not touched the other roof. Rain streamed into the upstairs bedroom and came out through the amateurishly installed flue of the downstairs stove. Both roofs had to be rebuilt and relined from scratch using most of the original tiles. This work is done. We will live with the 'insufficient' slope of one roof, especially now we've taken away the piles of rubble and mortar in the breeze block enclosures the 'builder' had placed by the west walls of both dwellings to hold the rubble of the external stairs. These stored Corfu's copious rain, dampening the sturdy walls we've now reopened to the sun.
In the lower storey of the house, nearer the apothiki, there's to be a dining room to the left, (a table cloth now on our plastic table) 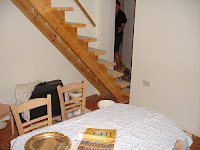 then the hallway from a central door below the balcony. Across the hall there's a utility room and just above that a bathroom with shower, tub and WC emptying into a fresh smelling cesspool. The lino on these floors will be taken up so we can enjoy the tiled floors beneath. In the upper storey of the same part of the house there are two rooms served by a new wooden stairway with a narrow opening on which I bump my head. These rooms will be made one, with an arch between. The stairway opening will be lengthened and widened; the pitch pine floor beneath the fitted carpets recovered and varnished. 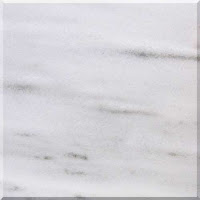 The woodfire will be brought upstairs and stood on semi-white 'kavala' marble from Euboea (tell me another six letter word with one consonant). This marble matches some that is in the house already. It will stand by the east side of the enlarged room. A window looking east to Albania - crudely bricked up on the same wall - will be reopened alongside but out of the way of a new flue. The neighbours say 'that's fine' 'endaxi endaxi'. No building permit is needed. This window was already there. Downstairs in the next part of the house (adjoining the neighbours) there's a stable door off the alley into what will be a bedroom. The rug we found on the beach will lie on its dark variegated marble floor. A curtained double door - yet to be fitted - separates this bedroom from the kitchen where Lin has economically assembled second hand equipment - small oven, grill and fridge. Plates, cutlery, cups, glasses, the familiar kitchen utensils are being distributed in drawers and cupboards below and above a spacious workstop and double sink.
Our exciting new house has been the victim of an incompetent renovator but, after a month's working holiday, we are on the way to recovery. It helps that a range of minor tones - including pink, grey, pale blue and mustard - have now been covered with white paint. Damp areas are drying out, the lime plaster prepared with a Greek version of transparent PVA as a base for paint.

One of the first things I associate with Greece is marble - initially the marble floor and skirting stones of the flat where I stayed in a room lent by a relative near Koloniki in Athens in 1957. With its distinctive smell the marble emanated cool in what was, for me, unfamiliar warmth.
Posted by sibadd