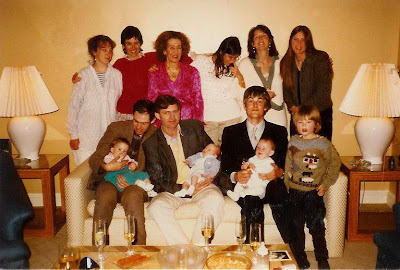 The photo is of Maria with some of her grandchildren. She died in November 2005. In a few hours perhaps we may have the start of the next but one generation. All of us have children - 15 in all - 6 of them girls. One son is married. They expect a boy today making one of my half-sisters a grandmother for the first time.
* * *
I've a list of things I didn't do yesterday to avoid doing the thing that has priority, which is to start writing a chapter I've agreed to write for a friend's book. As soon as I'm poised to start, displacement activities present themselves. Yesterday it was our garden - which Lin and I set to weeding removing and bagging that hairy plant which looks like Borage but isn't as well as lots of Sticky Bobby, dandelion, nettles and wayward couch grass. Lin tended the fish. Amy, back from work, helped. Other errands presented themselves. I phoned Mum. She's optimistic about the sale of the home we've visited since 1966. "If they go ahead and buy it the place will be as it should be - full of children". 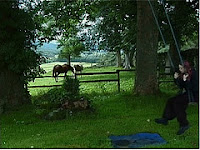 In 1973, returned from America and looking for work I took refuge in the Highlands and made a swing for the local children that hangs on a tree by the house with a view over Strath Nairn. It was used a lot but I've only needed to repair it twice in 30 years. Now it may be used again. These are hopes.
Lin and I chatted last night about whether life was better here or in Corfu. It's not a choice that interests me, wanting to be part of both - but I started the conversation because here we allow ourselves to be enveloped in news as we don't in Greece. What's the difference between being conscientiously in-touch with the human condition and overloaded with evidence of trouble? "Should we take a fortnight in Corfu before September?" we wondered.

The climbing rose - Jour de Gloire - from the garden in Handsworth has a delicate scent better than anything from a bottle. 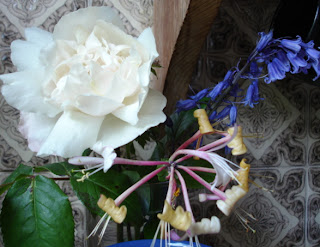