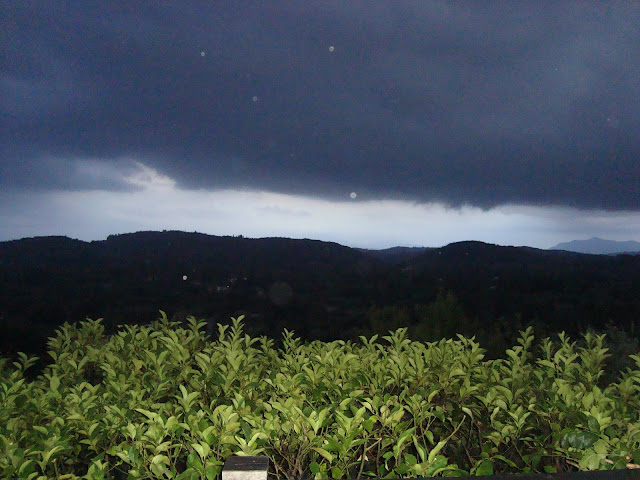 Before first light the parched island is soaked by a drenching downpour, a timely damping down of hectares of tinder. We lie in bed surrounded by unaccustomed gloom, lightning flashing through the curtains, crashes of thunder, constant rumbling. Mountains and sea are obscured; our forested foreground, now grey-green under a drifting overcast. The trees beside the house are wrung by the wind. Pouring rain spatters our windows, its fall muffled on the roof tiles, echoing in the downpipes. Water spills over the gutters splashing on the common path. Where I left a small gap in the kitchen windows, the counter’s wet. Water glosses the plaka under the veranda, the decking and concrete of our balconies, dribbling from the  yellowing leaves of the wisteria, soaking the green and red of the bougainvillea, bowing its branches. Abruptly a quilt is welcome on the bed and I switch to shirts with long sleeves and socks. I wear underpants again; even a jumper in the evening.
From this day of rain a fortnight follows of clear blue skies. The mountains in the east – rising in Epirus and the southern tip of Albania – return, during these unexpected days of early autumn , to their Wedgwood blue haze. The strip of sea between Corfu and the mainland could be mistaken for a placid lake, our green hills along its western shore, barer land over the strait. 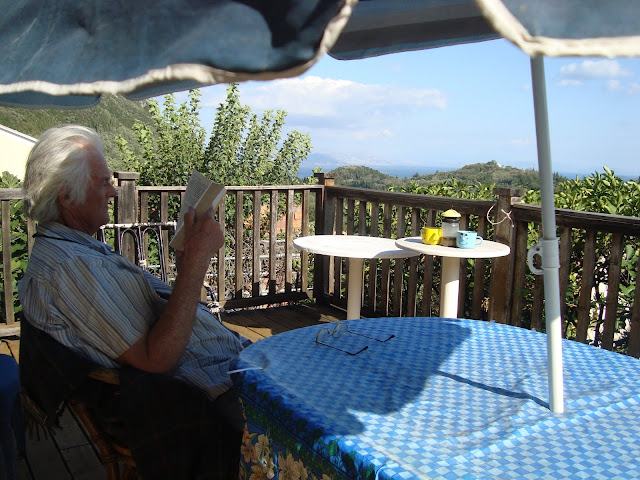 After weeks of washing clothes by hand – no great problem - we’ve bought a washer to replace the old one Lin couldn’t mend. Mark took it away for scrap after I’d unbolted its concrete steadying weights. I've carried them down to the garden where they stand as modernist shapes. From the same store on the road to Lefkimmi we’ve also bought a new wood stove – exact match of the one that came with the house 12 years ago. Age and misuse had warped the old stove's lid; its body leaked smoke from cracks at each corner. I manhandled three hundred weight of cast iron down the balcony steps, through the apothiki, to the garden where, filled with soil from the compost heap, the old stove sprouts a young bougainvillea we’ve bought. 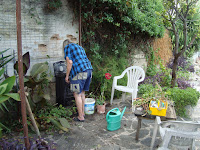 In search of context I’ve been reading a school text describing British economic and  social history from 1700. It ends in 1975 when I was 33 - just starting to live in a grown up way so it seemed; helping me to try understanding the next 44 years – my small life's window that included marrying Linda, her having our two children, getting our own house, the job I’ve had until I left the university a few years ago; my bicycles and my travels on them, the advent of Mrs Thatcher, the routing of the public sector, privatisation, the ending of the narratives and ideologies of modernism with its vision in many dimensions of 'one society'. About ten years ago I was strolling, with my folding bicycle, along the slab pavement of the Thames South Bank in London. Under my feet I found a commemorative plaque celebrating the Festival of Britain - marking its centre. For a millisecond I caught a full-body memory of a 9 year-old holding mum's hand in just that spot pausing amid many people - an enthusiastic crowded space - in 1951. "I have no wish to return to that time. I'd rather be in the now and the future" I thought. But I liked the thought of having been there long ago. 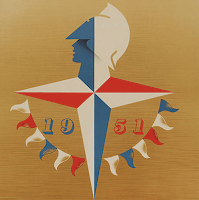 So...the changing fabric, population and demography of our city, Birmingham, and other cities, the implosion of empire, the blatantly diverging fortunes of rich and poor, automation, artificial intelligence and the spreading role of decisions by algorithms indecipherable by their authors, the vast harvesting of personal data, the end - almost - of posting letters in mailboxes, the ubiquity of screens and roving phones, the hours spent dealing - over the phone - with energy service companies, the world wide web which I entered only in 1995, personal data harvesting, the dilution of place as a product of vast increases in the ease of transience "I'm both somewhere and anywhere",  identity politics "I'm a type on a bureaucratic check list which is useful to know, and I'm not at all which is also a lesson"; the tsunami of superficial distraction, but also my allotment, my continuing work with family, on getting the work of my stepfather  - Jack Hargreaves - restored and published, and also our project with his descendant family ("such a privilege") to give a a wider profile to the laic sculptor of Ano Korakiana, Aristeidis Metallinos (1908-1987), my involvement with local campaigns especially Handsworth Park, the Victoria Jubilee Allotments...

...our encounters with the law, my membership of 1000Elders and participation, as a subject, in research into healthy ageing, the growing up of our children, the arrival of our grandchildren, our homes in Handsworth, the Forest of Dean and Corfu, the boat Summersong, and, the long association with the Highlands from a childhood Christmas at Fasnakyle through the time my mother married again and went to live near Inverness for forty years, to go back to the 35 years before 1977, my childhood, my abrupt encounter aged 12, on a desk in the study of a schoolfriend's father of black and white photo's, in a hard backed book, of thin bodies bodies piled on trucks and being pushed by a bulldozer into a pit, and youth, my old travels on land and sea, sailing the Channel...
... the coast of Brittany, the Mediterranean from France to Greece, across the Atlantic in Young Tiger from the Canaries to the Caribbean, my time in America, the faces of those who loved me and taught me, long dead but ever in my mind, the panoply of art, literature, poetry, film, music, sculpture, design, architecture that educates me, and enriches my understanding, my ever-present confusions, vexations and perplexities…

I’m also re-reading – much more closely than in earlier years - Out of Town: A Life Relived on Television by Jack Hargreaves. Published in 1987


‘...this book, like my programmes – is concerned with those times, with the feeling of the old, small-farming life and the know-how of it’. The story my stepfather tells is of the time when his mother and father met in 1889 to 1929 when Jack would have been 18 - ‘until I left the farm to go to London University and read Veterinary Science’

*** *** ***
There can hardly be a citrus tree on the whole island of Corfu that is not now infested and blighted by citrus scale insects, which over the last two years have settled in numberless scores on the underside of every young leaf, sucking its sap to access its sugar, bringing black mould to the leaves' upper surfaces. We are almost entirely bereft of once plentiful oranges and lemons. We see no end in sight for this grievous blight.

Some cut down their citrus trees. Others pollard them severely. Many paint the tree trunks with asvesti (white wash) but these insects do not travel up the trees from the ground. They move through the air on broad vectors across large areas. The insects, sometimes in a symbiotic relationship with ants, return as soon as new leaf shoots appear. Some spray with insecticide, which works temporarily but is not good for the fruit. We try regular spraying of non-toxic olive oil soap solution under the leaves. It works a little. So far we have avoided the blackened waste that has afflicted some trees we see in passing. We've heard that Bayer have a systemic insecticide applied to the soil around the roots which kills to insects leaving the fruit 'safe' after 3 weeks, and lasting a year. We are considering this option. Meantime we maintain the soap solution spraying with a pump action garden spray. Naturalist friends say there may be a chance of the trees learning to resist the harm caused to the vital photo-synthesis of leaves by insects and mould. They also say that a predator on scale insects may emerge. This is a low visibility catastrophe affecting tens of thousands of lemon and orange trees on Corfu and surely elsewhere. I'm always pleased when travelling on the island I see, now and then, a citrus tree bearing fruit, it's leaves unaffected and healthy. I saw a tree full of oranges in a garden on high ground in a village west of Agros a few days ago. Is it are resistant species? Have the pest insects not yet arrived? Waiting like a evil character in the wings is the olive tree plague Xylella Fastidiosa.