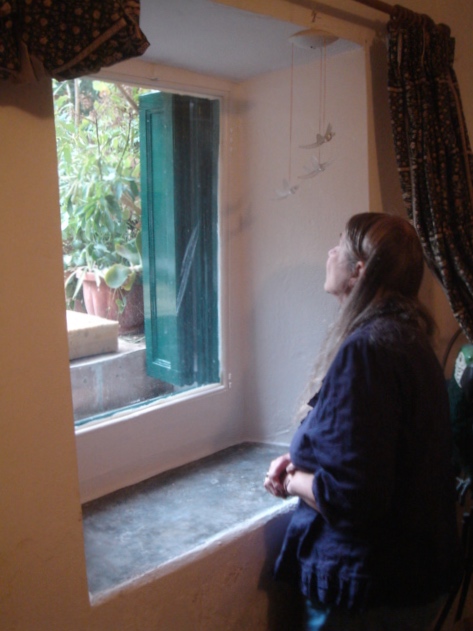 “Wouldn't it be simpler, even economical in the long run, to remove the whole window, frame and all, and have a metal opening window installed?”
"Yes and no" says Linda
Our dining room window is a quaint opening in the house, slightly hidden by steps up to the outside balcony, and pot-plant greenery. 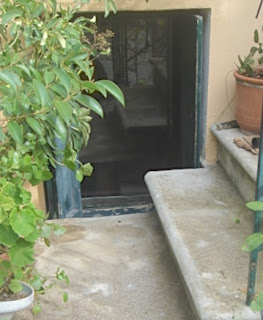 It must once have been a wood-framed inward-opening window with transoms. Before we came here, that had been removed - regarded beyond repair. We have instead, a fixed pane that drips condensation in winter. It doesn't open.
6 years ago Lin and I made shutters to fit outside this window - adapting doors recovered from a discarded kitchen cupboard. The job was complicated because the exterior entry to the window, at the house wall, was inches larger than the square into which the shutters on their new frame were to fit flush against the window. The angles, front and back, were slightly different too. We ended up. after some minutes of fruitless offering up, cutting out a section from the frame to get it to fit; then rejoin the cut ends; difficulties that should have been avoided by proper measuring. Then the shutters had to be reshaped to fit the adjusted frame.
Because of the proximity of the external balcony steps, the shutters could only open if two folding sections were hinged on one side, and one on the other. In time, we worked our way through these difficulties. Our neighbour, Lefteris, watching us, mused <Μικρό παράθυρο, πολλά δουλειά> "Little window, lots of work"


For the last year, Lin’s noticed that the inside of the old frame is rotting. On the dining room side, she poked a finger deep into the foot of it. Out came white insects. Procrastination no longer possible, we set to, chiseling out the wood below and beside the window. It came away in flaky chunks... 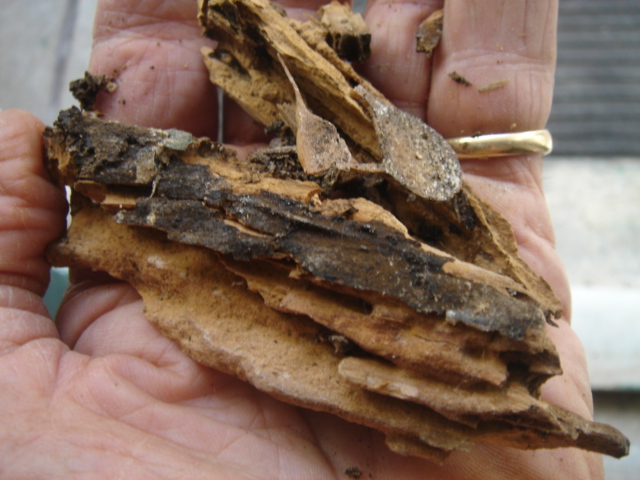 ...some damp but not so much rotten as termite infested. The insects came tumbling out onto the interior sill to be killed with insecticide spray. 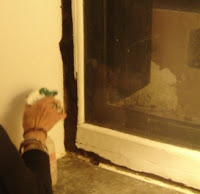 Our chiseling out continued along the bottom and the lower sides of the frame, until we were down to rocks and cement. I used the multi-tool wood cutter to remove frame-wood back to where it was still sound – hard old wood. As I expected more and more unsound, damp and rotten wood needed cutting out; more insecticide sprayed into the cavity.
"I'm glad we started on this at last" I said aloud, thinking how we could easily have invested in a new opening double-glazed window. But as, instead, we invested our energies repairing what existed, its value shifted.
"The rot's all out now. You've sprayed insecticide thoroughly. What next?"
"Lots of insecticidal wood preservative" said Lin... 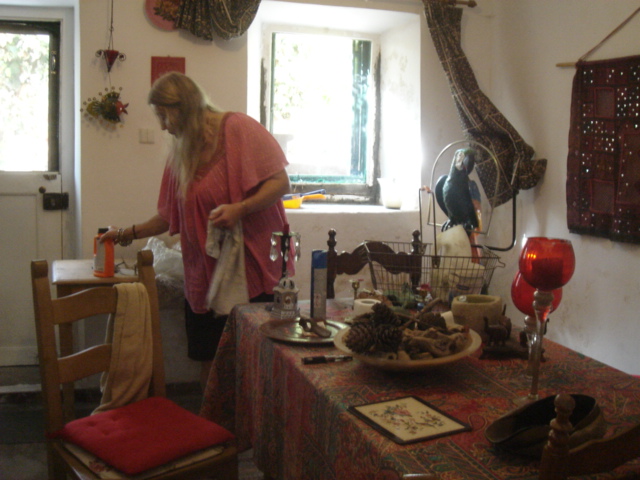 ...and then I'll spade the cavity with pudlo-ed mortar, and finish with plaster." 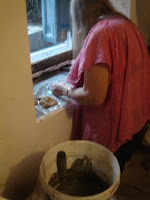 "While I unscrew the shutters. sand, undercoat and paint them and the external frame"
I'd seen there was a length of the lower frame topped by quarter-round trim serving as stoppers for the shutters to rest on, but serving, also, as a window-width rectangular 'ditch' in which rainwater was collecting - likely the main source of the rot.
From the apothiki I dug out a length of hardwood that, by good luck, was exactly wide and high enough. Offered up, and cut to exact length, sanded, preserved, undercoated, painted twice in Corfu green, it was put out on to dry - 24 hours each coat. 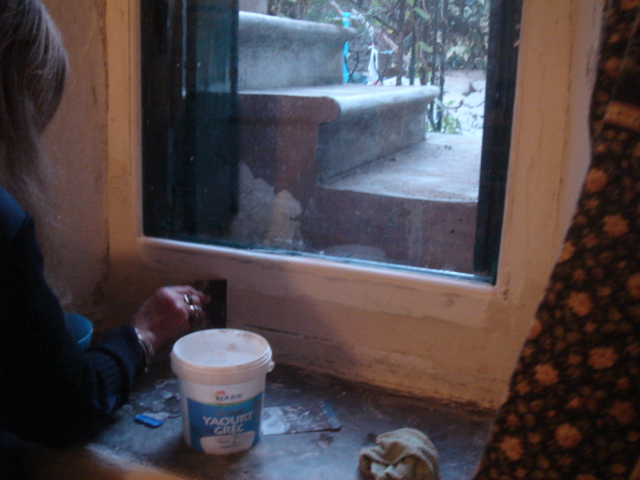 At the same time, after her plaster had dried, Lin applied undercoat and gloss white to her repairs inside. 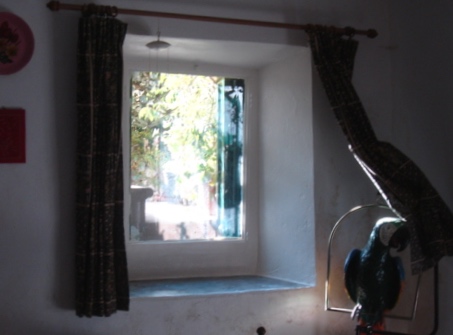 "Looking good" I said "I'll get on with the frame. Same old."
Sand, undercoat, two layers of Corfu green, after removing the shutters. The gloss - sticky and rich - takes at least 24 hours to dry, indeed, better left 48.
Nice and dry, I inserted the length of wood neatly in the 'ditch' on top of a light bed of silicone filler; all remaining cracks similarly filled and smoothed, and the ¼ round tapped off and cut away, still serving as stoppers, but in three much shorter separate lengths. I poured water on the outer sill to satisfy myself it would now run away onto a concrete balcony step, and not just sit there encouraging rot.
On top of the renewed bottom frame I painted a further coat of Corfu green. When all had dried, thanks to a few rainless days, I re-attached the shutters to the frame, having cleaned the little brass handle used to open them. 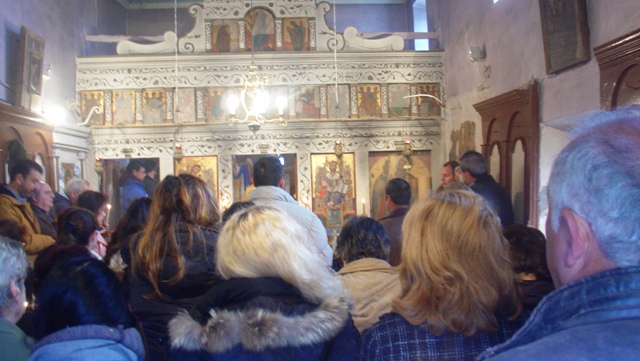