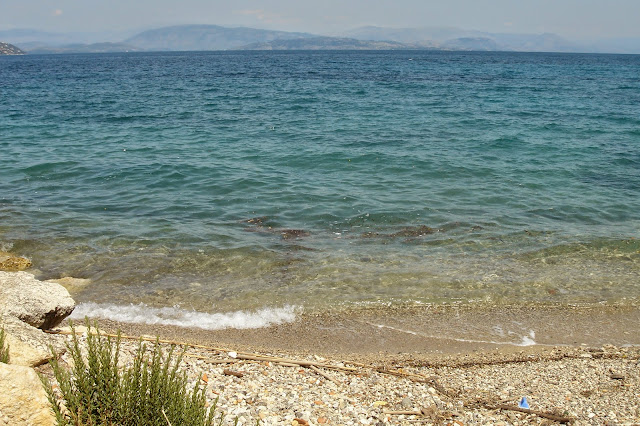 It wwould be a fabled island. Guy, Dave, Oliver and I set out in Summersong from her little home port of Ipsos; motoring without wind from the aquamarine shallows into the deeper blue of the Kerkyra Sea. 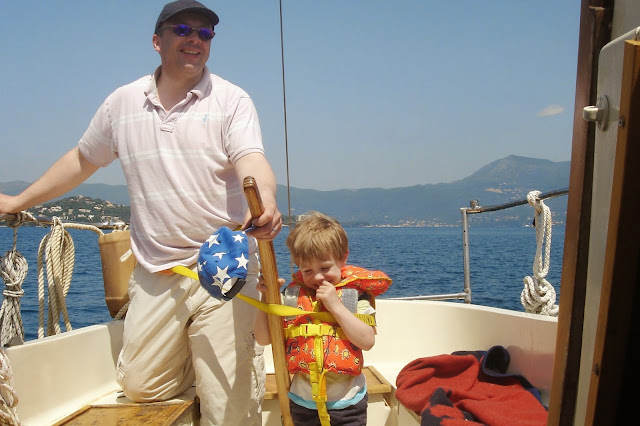 “See the engine?” said Dave
Oliver peered down on our engine under the first cabin step; made engine noises.
“Bob bob bob bob? Call it ‘Bob’’
“We’re going to Pirate Island” I said
Slowly the old boat headed south a little away from the coast, then further past Dassia Bay.
Water for Oliver, beer for the grown-ups and small croissants for everyone . The sandy pebbly shores passed slowly by and a small tree covered island appeared on the horizon
“There it is”

“Does he know what an island is?” said Dave
“I don’t know. But we can give Ollie some memories – for us; his innocence to make a different account of this melancholy place. Wouldn’t I prefer to set aside the arguments about what happened there; set aside in all its squalor. Wouldn’t I prefer my grandchildren to think of me living on Pirate Island - where we buried treasure; a cross or two pointing to the spot.”
We approached the island carefully; edged up to the ragged low jetty and took a line ashore; and headed inland.
“Ssssh watch out for pirates” 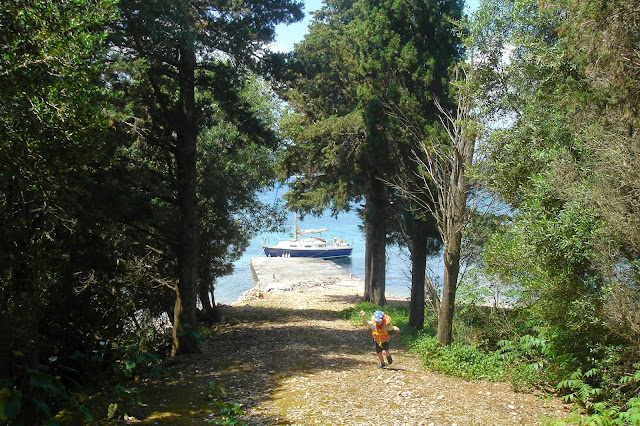 Under the shaded pines and through the ruined buildings where the pirates go.
"Could this be the place where the treasure was buried?" 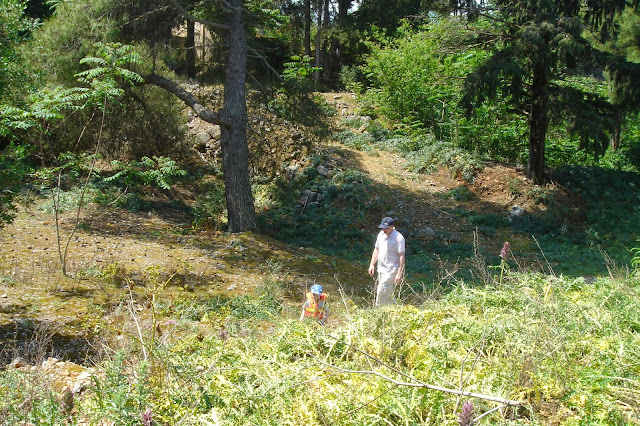 "Hear their noise!"
"Ssssh they'll know we're here?"
'Back to the boat...Quick!"
In no time we'd returned aboard, cast off, and were heading home, Oliver at the tiller steering with the foresail up before a gentle breeze. Quiet. Ripples and small splashes against the hull. 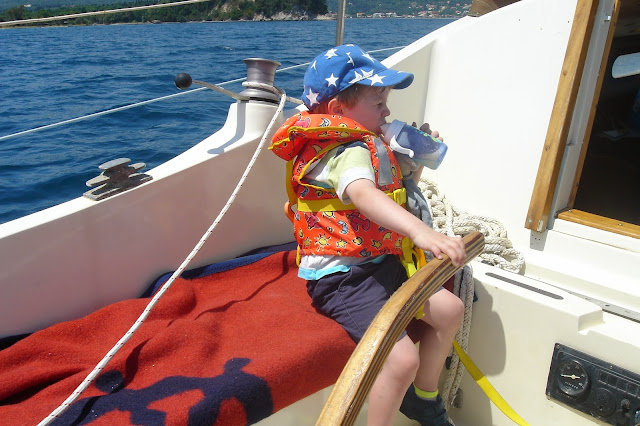 I found a souvenir - a thole-pin in a block of wood broken from the gunwale of one of the pirate's sally boats; rusted spiky nails sticking from it. Dave banged them flat against the stone work of the jetty. I drew out the pin and put it in the other way round.
"A boat!"
In my childhood there was a lot of time without grown-ups. I don't recall missing them when I wandered in gardens. Perhaps they were there watching, but a lot of the time I think I got to be on my own. I have early memories of walking along the banks of the Itchen, peering into deeper fast running water, finding it and knowing it could end my existence. I don't recall being told the dangers. I just knew them. In London I was taking the bus and the tube on my own from 10 years old. When I learned to cycle - late at 10 years old - I roamed widely through narrow streets and across Hamstead Heath. We had horses. I rode out on my own. The countryside was my oyster. In later years I started sailing making my own adventures. My rules were strict; less for my safety than the strict duty to attend to the seaworthiness of my 'small ship'. I was never a fan of 'Swallows and Amazons'. Why read a grown-up's fantasy about the private adventures of childhood? How I have wanted my children to have their own adventures; suppressing anxiety, being what some would consider an irresponsible parent. I'm so glad they walk the city. Brought up in the inner-city; witnessing and judging its hazards; street-wise, but also country-wise, knowing stock, alert to the seldom-dangers, knowing the riskiest thing is to get near a cow and her calf. That they've cycled and walked in wild places on their own and walked the city at night; unfazed by rain and wind and the insanely exaggerated fears of 'stranger danger'.
Posted by sibadd