I am writing to you to express my deep concern about developments since the 20th February 2015 Eurogroup agreement, which was preceded two days earlier by a letter from our Minister of Finance* outlining a number of issues that the Eurogroup ought to resolve, issues which I consider to be important, including the need:


(a) To agree the mutually acceptable financial and administrative terms the implementation of which, in collaboration with the institutions, will stabilise Greece’s financial position, attain appropriate fiscal surpluses, guarantee debt stability and assist in the attainment of fiscal targets for 2015 that take into account the present economic situation.

(b) To allow the European Central Bank to re-introduce the waiver in accordance with its procedures and regulations.

(c) To commence work between technical teams on a possible new Contract for Recovery and Development that the Greek authorities envisage between Greece, Europe and the International Monetary Fund, to follow the current Agreement.

(d) To discuss means of enacting the November 2012 Eurogroup decision regarding possible further debt measures and assistance for implementation after the completion of the extended Agreement and as a part of the follow-up Contract.

Based on the in-principle acceptance of this letter and its content, the President of the Eurogroup convened the 20th February meeting which reached a unanimous decision expressed in a communiqué. The latter constitutes a new framework for the relationship between Greece, its partners, and its institutions.
More precisely, the 20th February Eurogroup agreement stipulated a number of points outlining this new framework and process, including:


(a) The Greek authorities will present a first list of reform measures, based on the current arrangement, by the end of Monday, February 23. The institutions will provide a first view whether this is sufficiently comprehensive to be a valid starting point for a successful conclusion of the review. This list will be further specified and then agreed with the institutions by the end of April.

(b) The Greek authorities have expressed their strong commitment to a broader and deeper structural reform process aimed at durably improving growth and employment prospects, ensuring stability and resilience of the financial sector and enhancing social fairness. The authorities commit to implementing long overdue reforms to tackle corruption and tax evasion, and improving the efficiency of the public sector. In this context, the Greek authorities undertake to make best use of the continued provision of technical assistance.

(c) We remain committed to provide adequate support to Greece until it has regained full market access as long as it honours its commitments within the legal framework.

Based on this common ground, the Minister of Finance sent to the President of the Eurogroup a letter, dated 23rd February 2015, with the aforementioned “first list of reforms” [see (a) above] proposed by the government. On 24th February 2015 the said “first list” was accepted by the institutions as “sufficiently comprehensible to be a valid starting point for a successfully conclusion of the review” by 20th April 2015.
In order to expedite the process, the Ministry of Finance sent a letter to the President of the Eurogroup on 5th March 2015 urging that the process of technical discussions on specifying further the “first list of reforms” begin immediately. In the same letter the Minister of Finance attached seven examples of how the reforms in the “first list” could be developed and specified further.

Following a positive reply by the President of the Eurogroup (dated 6th March 2015) and the subsequent Eurogroup meeting of 9th March 2015, the first round of discussions of the Brussels Group (comprising of the four institutions – EC-ECB-ESM-IMF – plus the technical team of the Greek government) took place, in Brussels, on Wednesday 11th March dealing with both political and technical issues. At that meeting it was also decided that technical teams of the institutions would travel to Athens on the following day for on-site fact-finding to assist the Brussels Group negotiations.In the context of the above, I feel it is critical to alert you to a number of developments which are either undermining the spirit of the agreement reached or making their fulfilment perilously difficult.


(a) On 4th February the European Central Bank lifted the waiver for minimum credit rating requirements for marketable instruments issued or guaranteed by the Hellenic Republic, while declaring that the waiver would be restored when an agreement was reached at the level of the Eurogroup. Moreover, even since the Greek banks were referred to the Bank of Greece’s ELA facility, the ECB has been raising the ELA’s ceiling at shorter intervals than normal and at rather small increments that incite speculation and spread uncertainty vis-à-vis Greece’s banking system. Additionally, the ECB determined that Greek banks cannot hold more T-bills than they did on 18th February 2015, thus restricting their participation to well below the T-bill cap. (Please note that, in the summer of 2012, when a new Athens government was in a similar situation to ours, ELA was being expanded generously, the T-bill issuance cap was lifted to allow the government to finance its debt repayments to our creditors, and banks were not restricted to any limit corresponding to a prior date’s holding. In that manner the government of the time and the Eurogroup were granted sufficient ‘space’ to reach an arrangement that allowed the Greek banks to move away from ELA and back to normal ECB financing methods.)

(b) Following past failures (of the previous government) to complete the scheduled reviews, disbursements under the loan agreements with the ESM-EFSF were discontinued (while those of the IMF were similarly delayed), yielding a substantial financial gap in 2014 and 2015. This includes the profits from the ECB’s SMP-sourced bond redemptions, which the ECB distributes to member states on the understanding that they be passed onto the Greek government.

Given that Greece has no access to money markets, and also in view of the ‘spikes’ in our debt repayment obligations during the Spring and Summer of 2015 (primarily to the IMF), it ought to be clear that the ECB’s special restrictions [see (a) above] when combined with the disbursement delays [see (b) above] would make it impossible for any government to service its debt obligations. Servicing these repayments through internal resources alone would, indeed, lead to a sharp deterioration in the already depressed Greek social economy – a prospect that I will not countenance.

Meanwhile, I also regret to report that little progress has been made in the negotiations between the technical teams in Brussels and Athens. The reason for the extremely slow progress is that the institutions’ technical teams, as well as some of the actors at a higher level, seem to show little regard for the 20th February Eurogroup agreement and are, instead, committed to proceeding along the lines of the Memorandum of Understanding that pre-dates both the 20th February agreement and 25th January 2015 – the date on which the Greek people elected a new government with a mandate to negotiating the new process established by the 20th February Eurogroup agreement. It is difficult to believe that our partners consider that a successful reform drive can be carried out under such restrictive and pressing constraints, including the financial squeeze that my government is currently labouring under.

The Greek government remains steadfast in its commitment to fulfil its obligations to its partners within the framework of the 18th February letter and 20th February Eurogroup decision. However, I am also obliged to make clear to you that, in order to continue to fulfil our obligations, as we have done up to now, progress has to be made on a number of fronts:


(a) After 20th February Eurogroup agreement and the approval of the extension of the MFAFA by member states, and given that the technical discussions with the institutions are under way, the ECB should return the terms of finance of the Greek banks to their pre-4th February 2015 state.

(b) The process by which the reforms proposed by the Greek government, and their evaluation, must be immediately clarified so as to make a successful conclusion of the review by the end of April 2015, as well as to specify the recommencement of disbursements with the progress of the negotiations.

(c) The process must be specified (as well as the participants and timetable) by which further arrangements (which my government would like to take the form of a ‘Contract for Greece’s Recovery and Development’ – including provisions on Greece’s public debt in the spirit of the November 2012 Eurogroup agreement) will be agreed to before the end of June 2015.

In conclusion, Greece is committed to fulfilling its obligations in good faith and close cooperation with its partners. To this purpose we are committed fully to the process specified in the 20th Eurogroup agreement so as to begin immediately the work of implementing reforms crucial to our economy’s prospects of long term development within an inclusive Europe. With this letter, I am urging you not to allow a small cash flow issue, and a certain ‘institutional inertia’, to not turn into a large problem for Greece and for Europe. 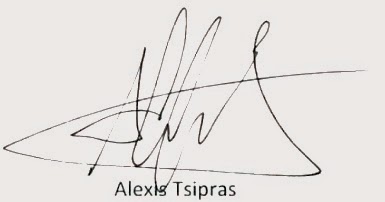 *Letter sent by Yanis Varoufakis, the Greek finance minister, on 18th Feb 2015, to Jeroen Dijsselbloem, the Dutch finance minister who chairs the eurogroup, formally requesting an extension of the existing bailout, something Tsipras had resisted since his government's election. See also Yanis Varoufakis' blog entry for 20th March in which he picks up on the matter of a subversive video circulating on social media.