The Greeks - Τρεις κι ο Κούκος - did well at Sally’s Bar* on Halloween night, a band of four from Corfu played a spirited two hour set of golden oldies – Knocking on Heaven’s door, The House of the Rising Sun, Hi Ho Silver Lining... 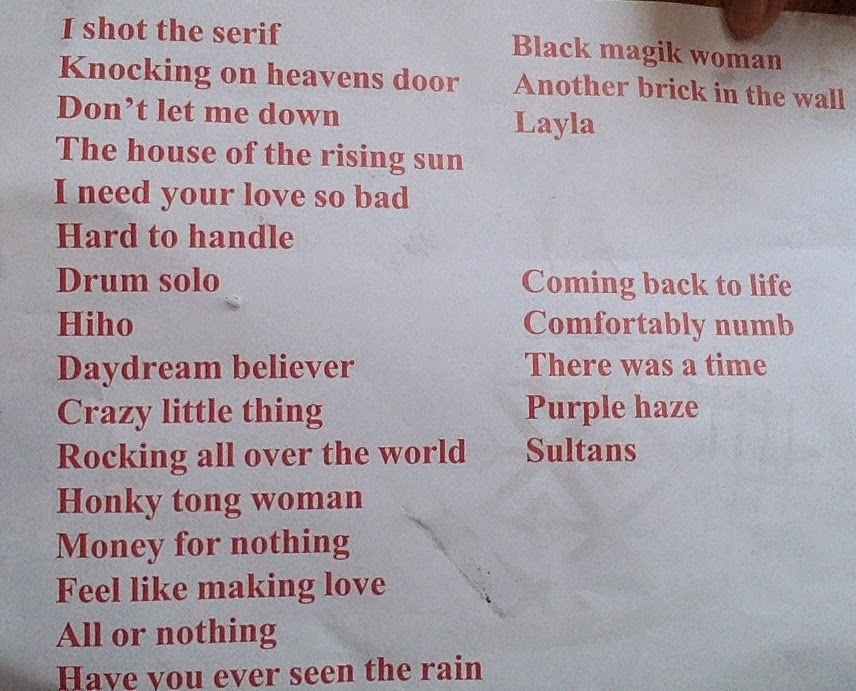 ...and an intense frenetic drum solo, complementing the preparatory work of Sally and her people creating the evening’s Halloween atmosphere..."using humour and ridicule to confront the power of death"...

...blood stained floor, crime-scene tape, the trace of murdered corpses, gore dripping from the WC cistern and something frightful trying to claw its way out of the bowl; stars and moons shading the candles, dancing skeleton and vampire faces .... 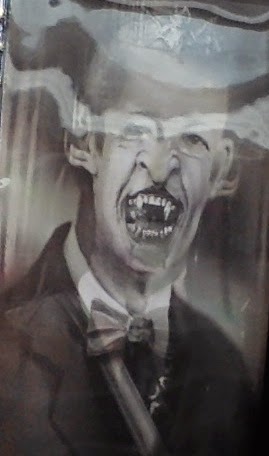 ...on the big screen and prizes to cue creative horror costumes and grisly make-up, a zip fastener on a face parting skin to reveal a bloody wedge of flayed skull beneath; Stephie as Ann Boleyn in full Tudor, a blood weeping ring around her neck, Wesley as William Wallace, ready to be hung and quartered by the English, a coven of witches, a gruesome zombie or two and Dave as Crocodile Dundee in dark glasses, not exactly scary but at least he’d made the effort while Lin and I came as a couple in black – our normal wear for a winter evening.
“Imagine an English group being able to reel off as catchy a repertoire of Greek songs for a Greek audience” I said later “This group – 3 & The Cuckoo - really hit the old ethnic Brit spot!” Within minutes, Sally’s guests were singing along, and lots dancing...

...mostly the woman at first, as is the way among the British. Deafened and disoriented, sitting under a big speaker, I nursed a soda water, ill-spirited among my fellow citizens, glimpsing bits of UK news ribboned under the screen over the bar.
“Blimey the second appointee’s resigned from that abuse enquiry”; ‘Theresa May will be making a statement on Monday’ it ran. Another nominee seen as too close to the great and the good. Isn’t that the sub-text of this matter, épater l'établissement?
We’d been invited to this event by our friends Paul and Lula who when they arrived at Sally’s handed us a card.. 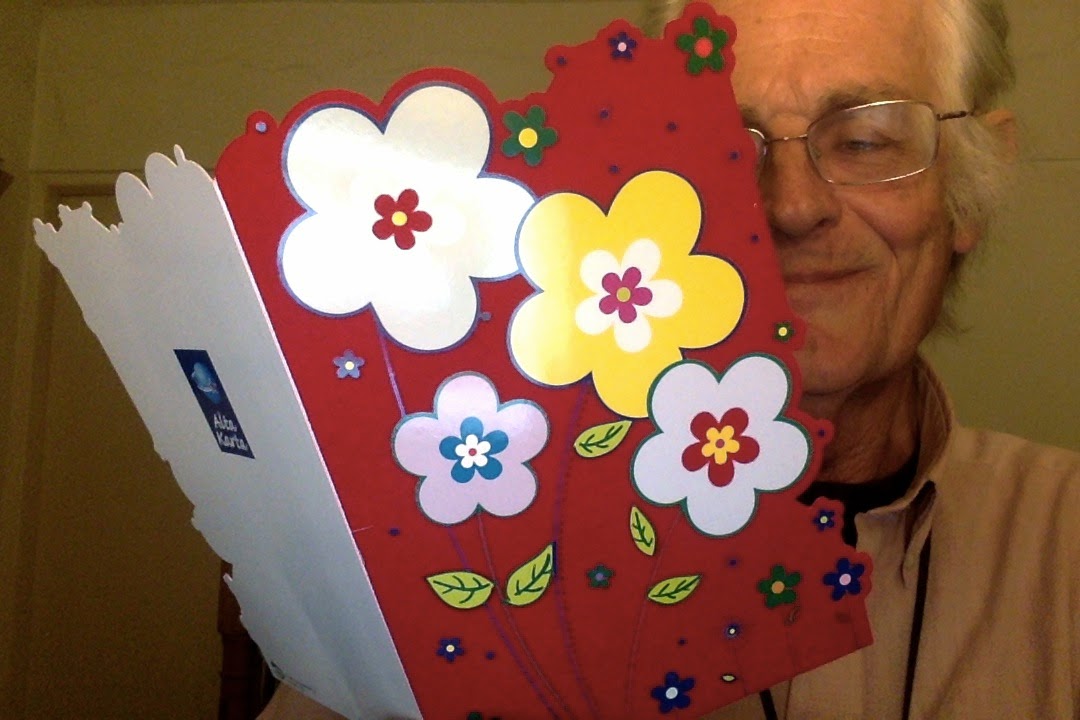 “It was tricky finding words to rhyme with Baddeley” said Paul.
He and and Lula were at our table, also our fellow villagers Stephie and Wes, who’d kindly driven us down to Ipsos. Amid the deafening music, I tried to read lips and nodded understandingly, saved from being a complete kill-joy by my friend who’d come dressed in a white suit, distinctly himself, persuading me to switch to beer, tapping our glasses, grinning amid the enveloping sound, gesturing over the table mock-manically, thumbs pointing up? down? sideways? I nodded gamely but seeing him joining in so spiritedly I felt ashamed and heaved myself up to dance – if you want to call it that - and Paul rose too. We stumbled and jogged around amid amplified cheery noise - the ghosts’ high noon in Ipsos, Greece - laughing and yelling in the bouncing throng, while Lin stared at us wearing an “I’m saying nothing" look.
It was scary.
“So how long have you two been married?” asked Lula. Amid the sound I guessed her question.
“Thirty six years” we shouted, almost in unison
“And if you count from when we met it’s 40 years!” mouthed Lin
I’d actually bought Lin a present on this anniversary which despite its coincidence with Halloween I seldom remember, let alone celebrate. Amy had pointed out something in a window in town a few weeks ago
“Mum really likes that” 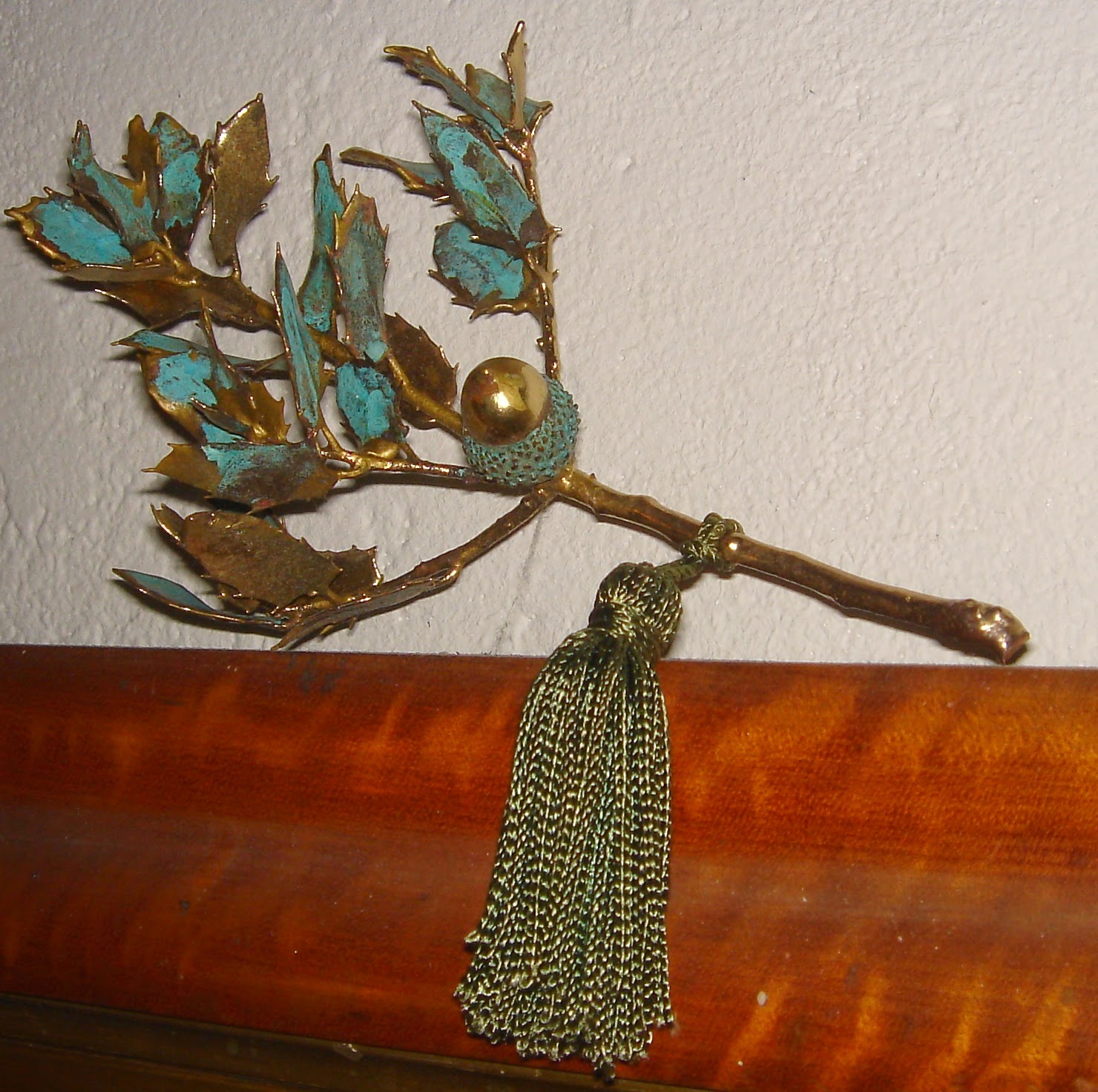 On 30 October my daughter  phoned to remind me.
“I’m not that doltish, Amy, but thanks. The present’s wrapped and ready.” A sprig of our ever-present Hollyoak.


*€800 was raised by Sally and her customers and donated to the national  non-profit voluntary organisation The Smile of the Child «Το Χαμόγελο του Παιδιού», one of whose community homes is based in the north of the island at the village of Magouladon, 3 kilometres south west of Sidari 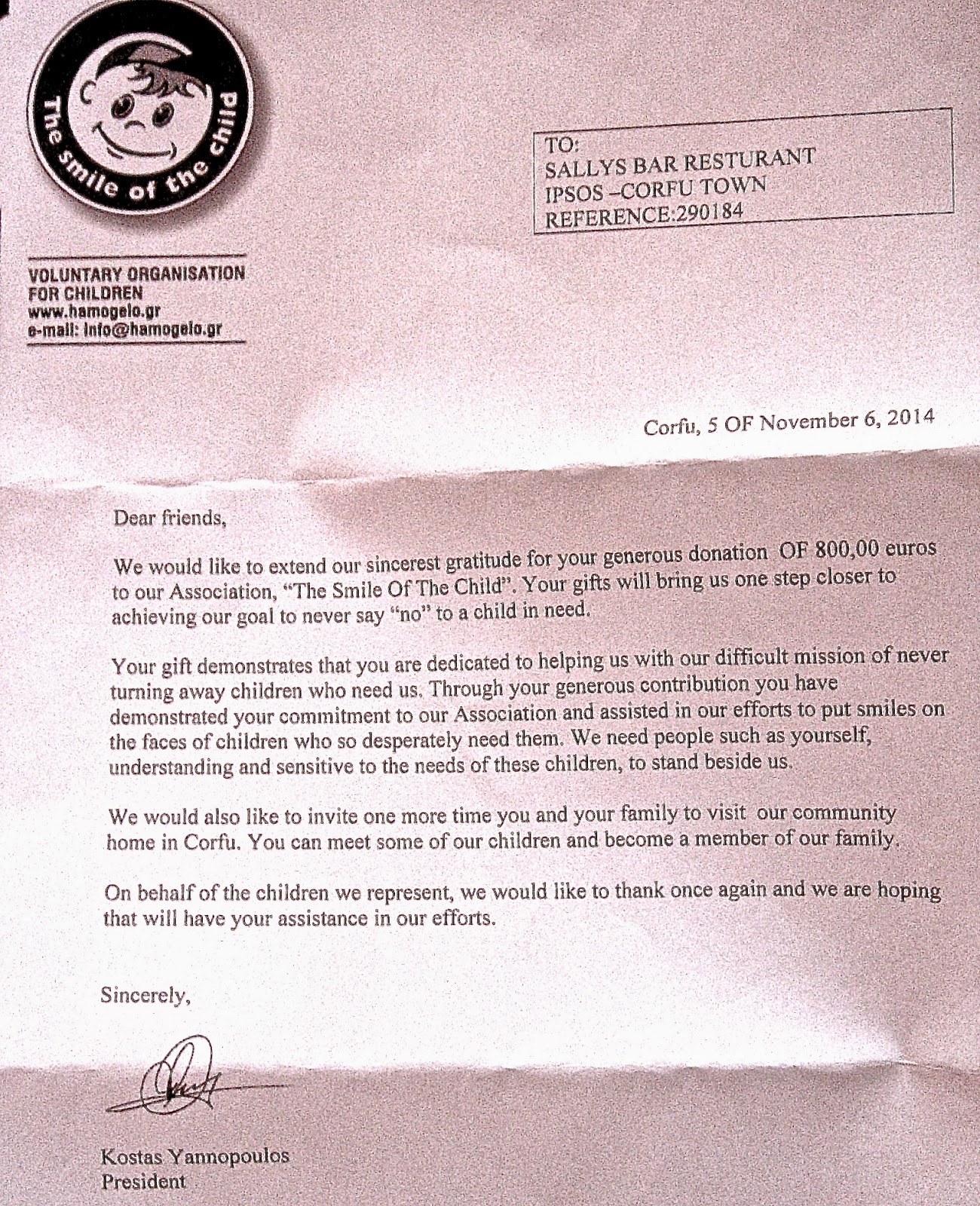 *** *** ***
In the darkness of Plous Bookshop off Theotoki, Miles Davis in the background, enjoying a large coffee and using their WiFi, I emailed the owner a copy of Richard Pine’s latest article from The Irish Times – a piece about how translation of Greek authors has been hampered by bureaucracy and fitful support for translators.


‘Greek literature risks getting lost in translation’ (Irish Times, Tue 14th Oct 2014)
If you write in a less well-known language, such as Irish, Finnish or Greek, the essential vehicles for reaching a wider readership are a reliable translator and a publisher who can exploit your book in the marketplace. This in turn requires a cultural policy underpinning the work of translation. But there is no government agency responsible for pushing Greek writers under the noses of commissioning editors, reviewers or the bulk-buying outlets.
In Greece, the Frasis Φράσεις project, managed by the national book centre, funds the translation of books published outside Greece. In its two years of existence, with a budget of €189,000, out of a total of 100 applications it has subsidised the translation of 28 books (at an average cost of €6,500), only four of them into English.
I’m told by translators that the Frasis application procedure is bureaucratic and its operation intermittent; it seems to have no policy guidelines, and no marketing role, which imperils any project that aims to get Greek authors into Waterstones or on to the Amazon website.
And last year the government announced the closure of the national book centre, with Frasis being subsumed into the culture ministry.
Who are the Greek writers we need to know? Nikos Kazantzakis is in a class of his own: almost everyone has heard of Zorba the Greek and The Last Temptation (maybe because they saw the films). It would be unfair to say that his reputation overshadows later writers but he remains an example of a Greek writer who, because of the power and popularity of his writing, could readily attract a publisher of the calibre of Faber and, in the United States, Simon and Schuster.
It’s the power of Greek writing that makes it so rewarding. It’s emotional, it’s visceral, it’s passionate. Of course the perennial themes of love, jealousy and ambition are present, but Greek novelists seem to be preoccupied, very instructively, with the events of history in the past century, and the emotions they evoke.
For example, the disastrous Anatolian campaign of 1920- 1922, when Greece attempted to invade Turkey, is the subject of several recent novels, including Panos Karnezis’ The Maze. Such events not only continue to resonate within the Greek folk memory, but provide non- Greek readers with an understanding of the persistent tensions and anxieties which make modern Greece so rewarding to study.
Karnezis also writes with wry and acute perceptiveness of contemporary Greek life in stories such as The Birthday Party, allegedly portraying the Onassis family. Karnezis, published by Jonathan Cape, is lucky in that he lives in England and writes in English. But it is only occasionally that a Greek author finds a mainstream publisher.
One major Greek publisher, Kedros, has an impressive list of fiction and poetry in translation, but, based in Greece, is ineligible for Frasis funding. An unsung hero is Denise Harvey, who publishes from the island of Euboea: her edition of stories by Alexandros Papadiamantis, together with his novella The Murderess, is perhaps the single most important publishing achievement I can think of. Again, Frasis funding is not for her.
My recommendations must necessarily be subjective, and limited to a very few of the titles I have read. The tragic but beautiful Astradeni by Eugenia Fakinou (Kedros), depicting island departure and resettlement in the city, will ring many bells among Irish readers. So too will Dimitris Hatzis' The End of Our Small Town (Birmingham University). If you like detective thrillers, Greece has its Inspector Haritos novels by Petros Markaris; at least four of his, including Deadline in Athens, are available from Vintage. Vangelis Hatziyannidis has two novels of dramatic quality: Four Walls and Stolen Time, both from Marion Boyars. Yiorgi Yatromanolakis, widely regarded as an amiable eccentric, concentrates on the psychology of village life: The History of a Vendetta, The Spiritual Meadow and Report of a Murder are published in the UK by Dedalus Press, with EU and UK arts council funding. There are many novels of the German occupation and civil war. Outstanding among these is Pavlos Matesis’s The Daughter (Arcadia), which has been translated into nine other languages.
All the books I’ve mentioned are in print. Many others, translated in the 1950s and 1960s, are out of print and cry out for reprints. Many more, from past and present, are untranslated.
What these stories have in common is an earthiness, a deep sense of history and tradition, a seemingly infinite capacity to engage with social issues, and a sensitivity to what it means to be Greek, how to celebrate life in all its horrors and joys. Partly for the echoes and parallels, partly to discover a new culture, Irish readers need to find them.

*** *** ***
The plan to treat our wooden balcony with wood preservative – Resolcoat – has come up against our discovery that even preserved from further rot its planking will be unsafe. 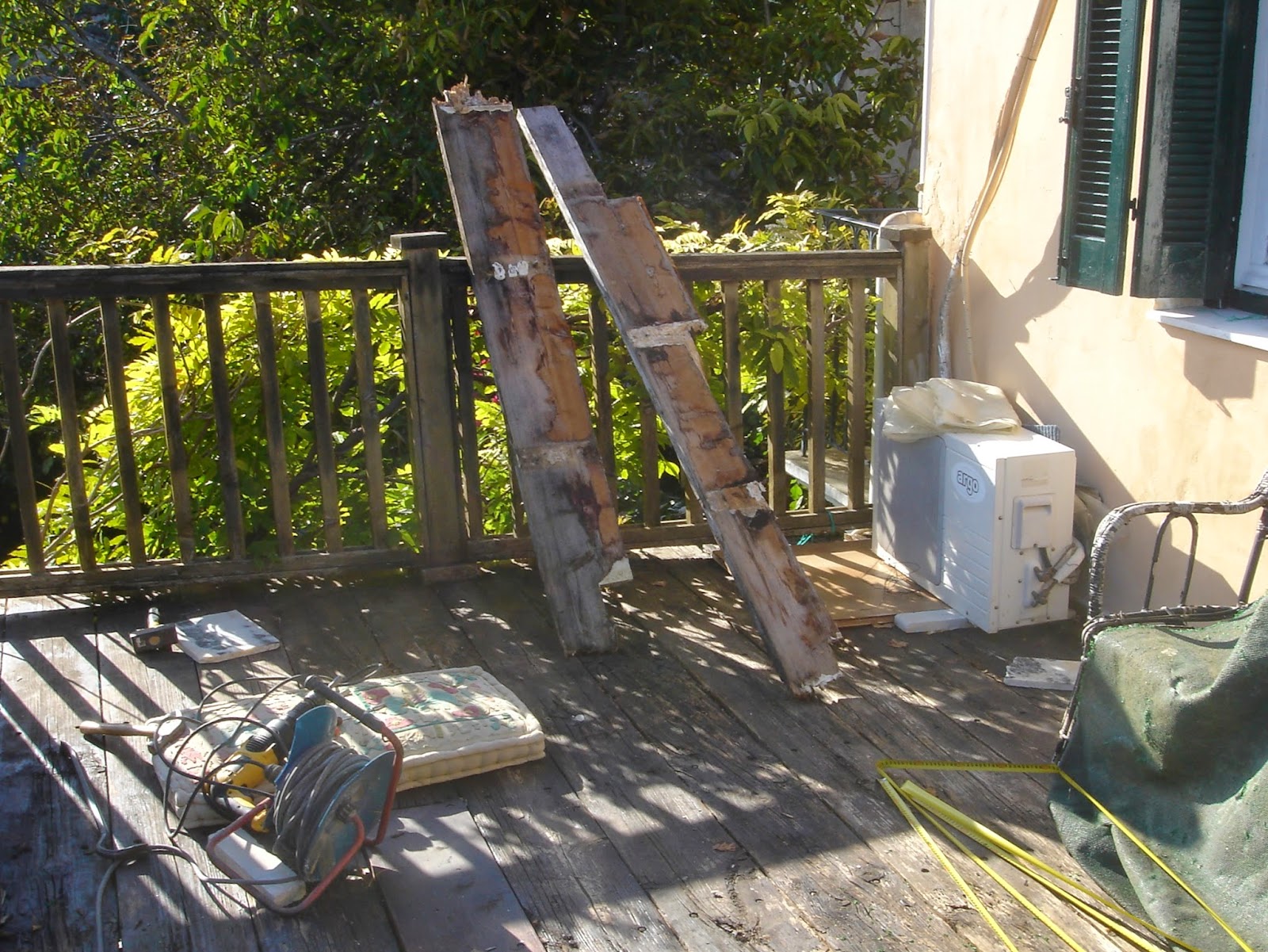 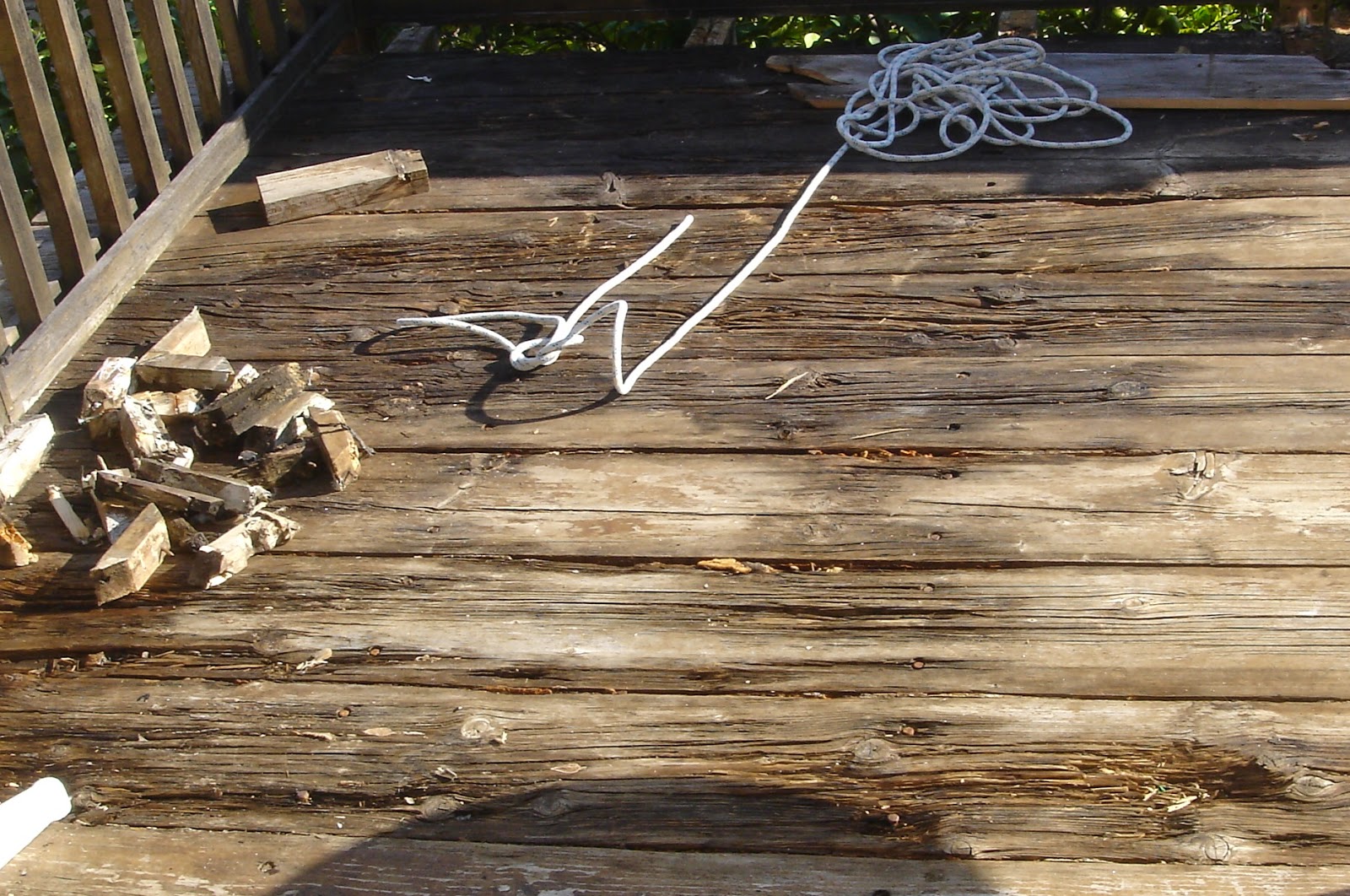 The list of options is tedious. Some are now only described in the past imperative
“When we first arrived we should have…”
“Well we didn’t so leave it. OK?”
We’ve thought of replacing the whole structure with a concrete balcony and iron railings but that makes it a permanent  structure requiring planning permission and, if done without the uncertain laws of Greece, a legacy of penalties for our children if they should want to sell the place, not to mention a back-log of unpaid taxes for the extra space gone unaccounted.
We’d tried all sorts of covers to protect the wood from sun and rain; measures which, by preventing the wood from breathing, collected damp beneath, accelerated the degradation of the balcony’s soft wood.
“Just take the whole thing down. It’ll be a good year’s supply of firewood”
“No. The view from this balcony is one of the pleasures of this place. Why we bought it even”
I’d like to replace all that’s rotting with tanalised wood, but this seems unavailable on the island.
“Why not use decking?” 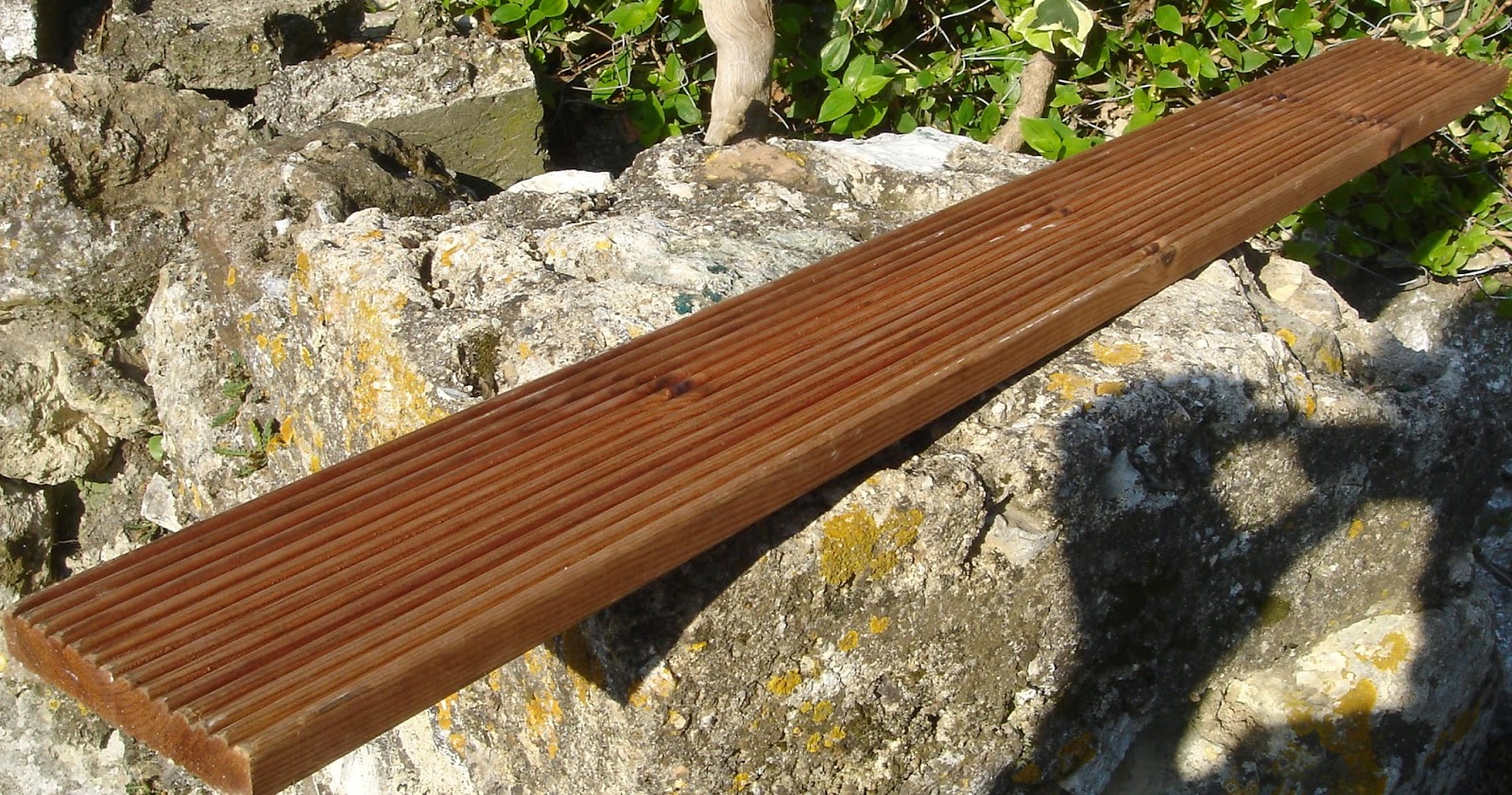 Asking at a woodyard in town I learned this stuff is hardwood and ‘treated’ with preservative, but needs 50 centimetres or less between supporting beams. Our current beams are 60 centimetres apart.
“So to use decking we need eleven more intervening beams”
It’ll entail taking out the old decking for firewood; taking down all the existing beams, repairing them where rotten and weathered, sanding them back, treating them with preservative – Resolcoat – and putting them up again but turned 180 degrees so their original seated edges face down. We then add the new and treated supporting beams with more brackets and lay new decking over the whole and ensure the balcony railings are refitted round the new and treated wood, undamaged and firm.
“Wouldn’t it be cheaper to just buy replacement wood of the kind we have already?”
“Just perhaps, but the stuff's so hefty compared to the hardwood decking, and we are still going to need the labour time disassembling all the support beams and treating them. Let’s go for the decking. It’s altogether handier.”
“Well you can pay for it” said Lin