*** *** *** ***
"Everyone knows Brassicas bolt in Handsworth"
"I didn't"
"More fool you"
Typical. I was sharing with Linda my apprehensions on my latest planting, after reading in a book about vegetable gardening where someone's talking about compressing the soil to ensure their just-planted cabbages won't bolt. This! After the care I've taken preparing a bed like eiderdown - triple dug, carefully couch-weeded, mingled with topsoil and well damped compost  - for Brussels sprouts, cabbages, broccoli and cauliflower. At first I was delighted to see the seedling plugs growing. Then in the last week I begin to worry if they're bunching or bolting. Another lesson, after already losing an earlier crop to bolting.
"If you've got rabbits they'll like the leaves" said one fellow gardener. 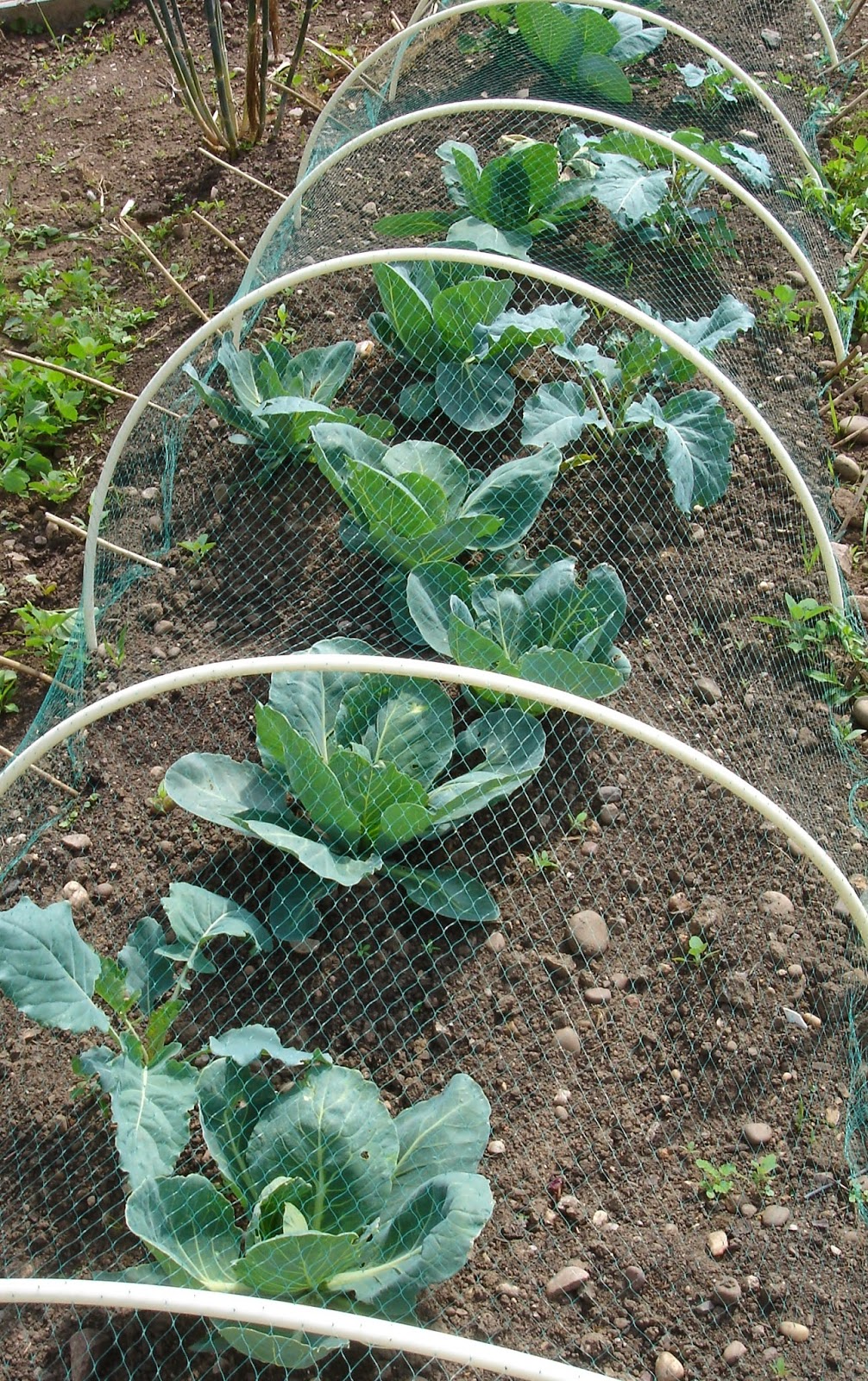 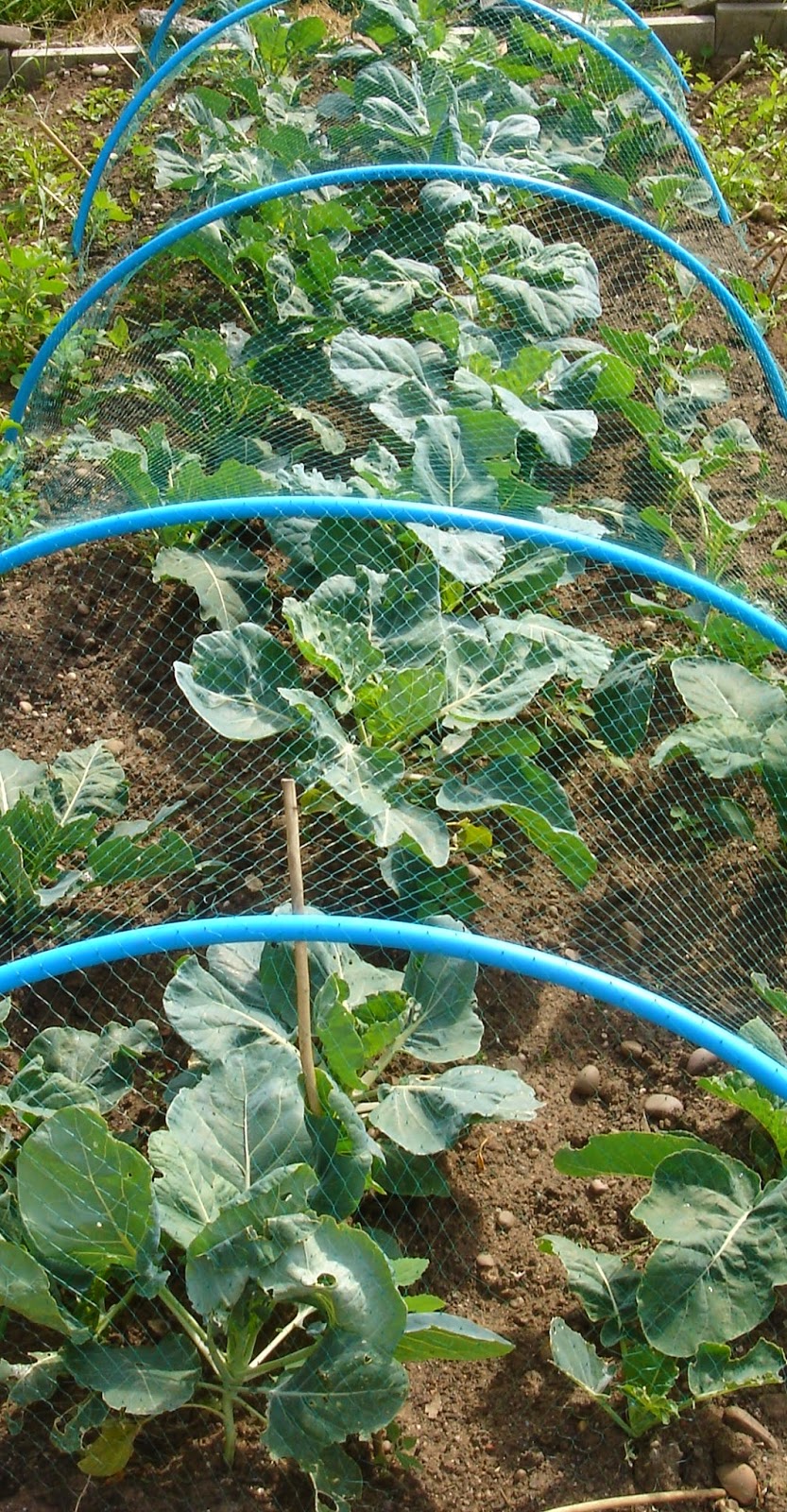 At least the hooped netting has kept the pigeons at bay. So. Next time I plant brassicas they'll go in harder ground. perhaps the same since it's been so well dug, but walked over. My rhubarb's coming along. My marrow is pregnant; at least four fruits growing lustily. 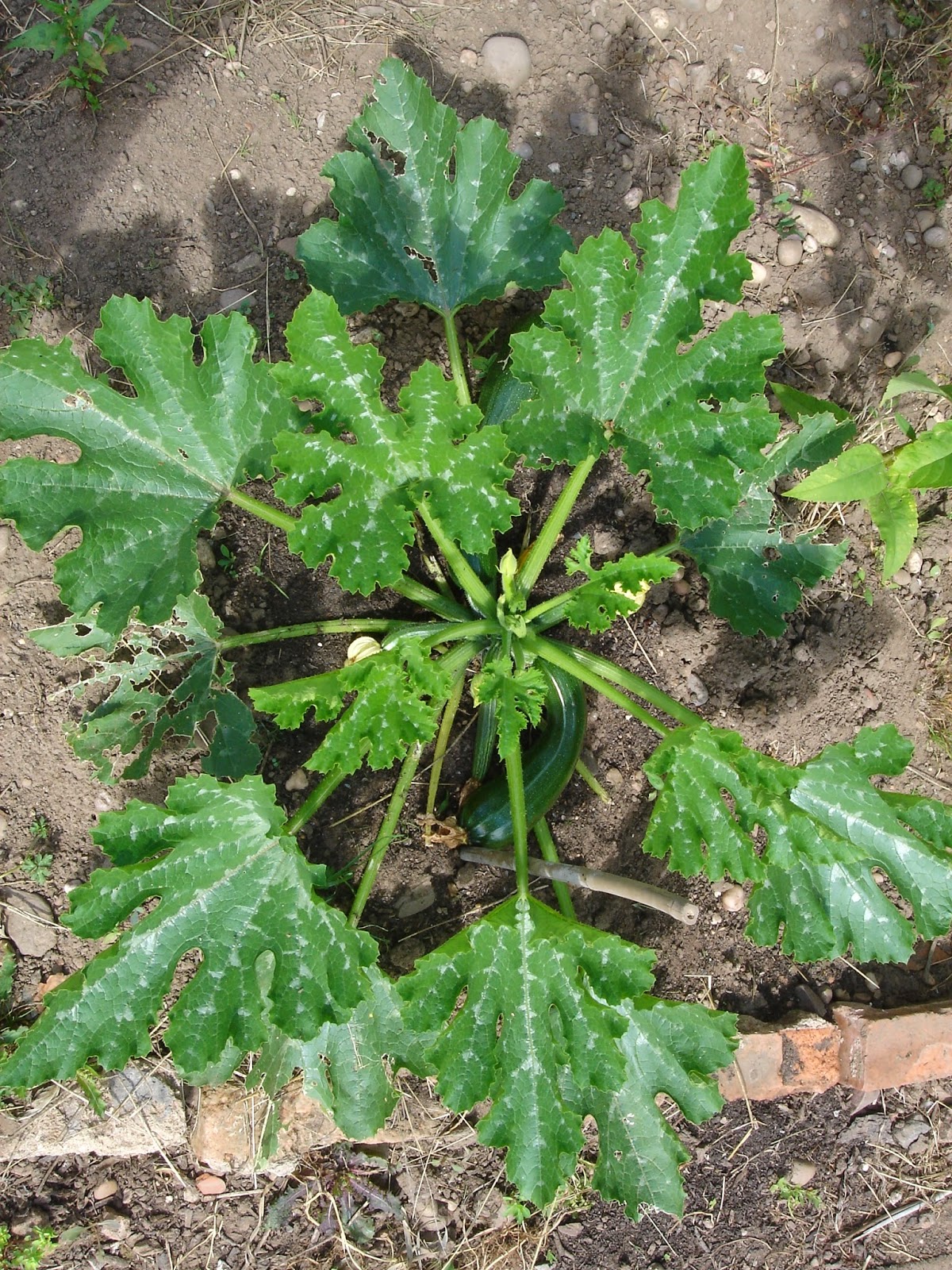 So how do I protect them to maturity from the invasion of slugs and other ground creeping denizens? The runner beans are quickly twisting their chaotic way up the bamboos I've raised. 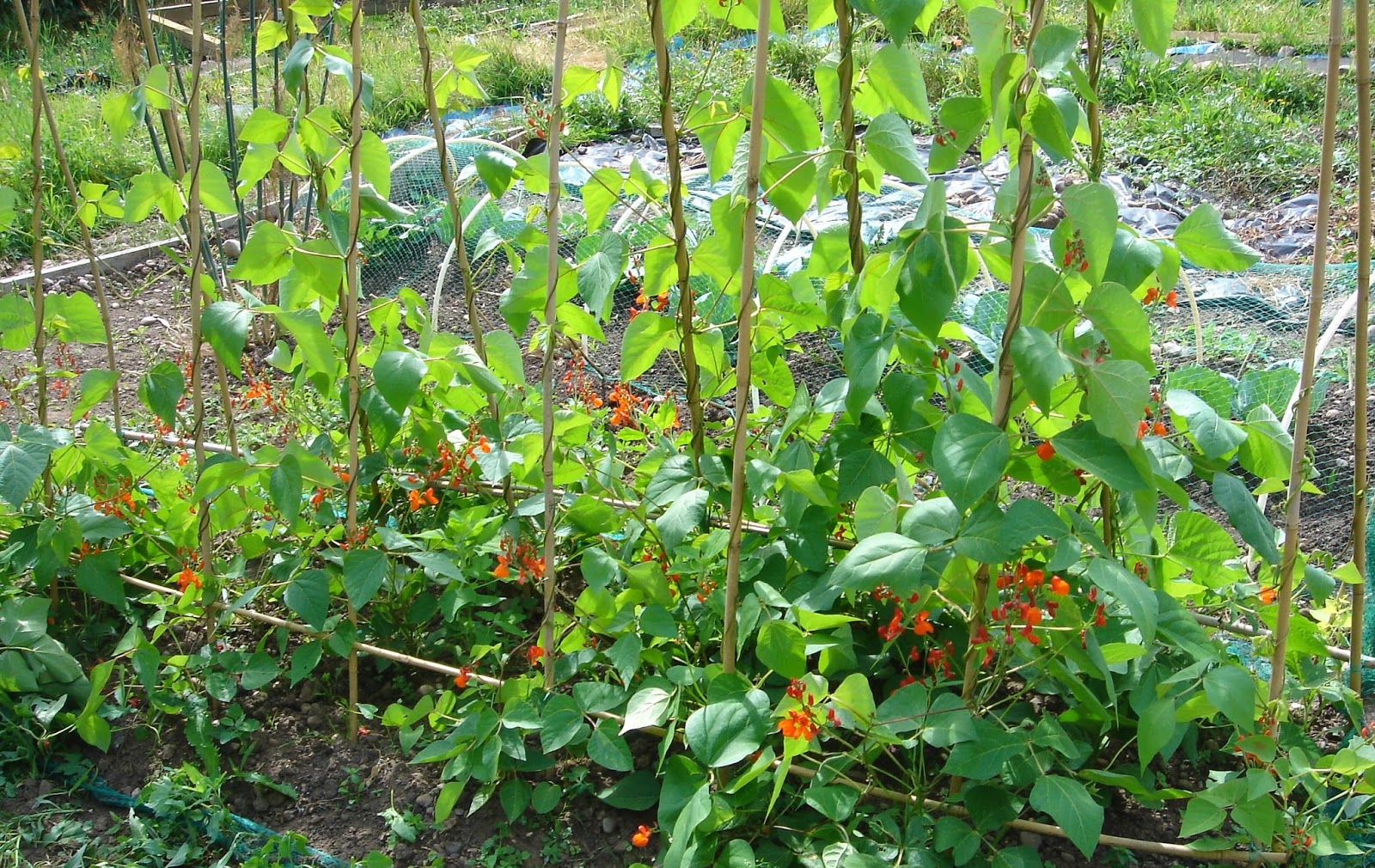 My six rows of potatoes are coming along well. Four rows of Jerusalem artichokes are above my head.
*** *** ***
At home Lin and I have been trimming back shrubbery, loading green sacks ready for this week's green waste collection for which we're one of the 10% who've paid what's being widely called a 'garden tax'. Still in his pyjamas the other morning Oliver helped load sacks with tendrils from our ever spreading Wisteria. 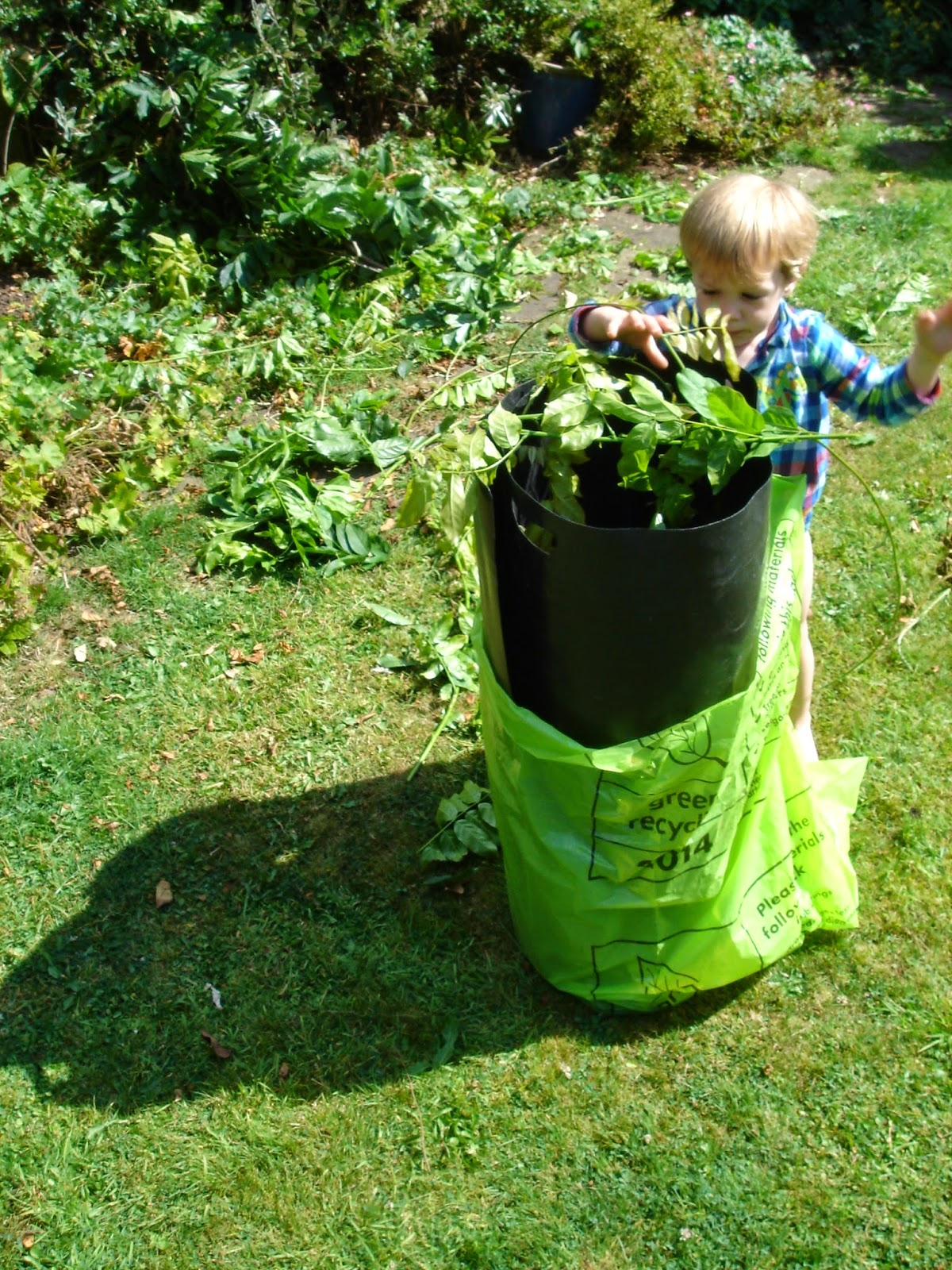 Yesterday Paul, one of HHH's more recent volunteers, and I cleared the back garden Lin and I'd inspected yesterday. Using sacks in bins, bins alone and builder's bags plus wheelbarrow we worked our way through the place in four hours, carting rubble, dead wood, a settee and sofa, assorted metal, a bedstead, green waste and over 200 old carpet tiles - some of which I'll keep for the allotment - up a narrow alley between houses to the van parked in Stamford Road. 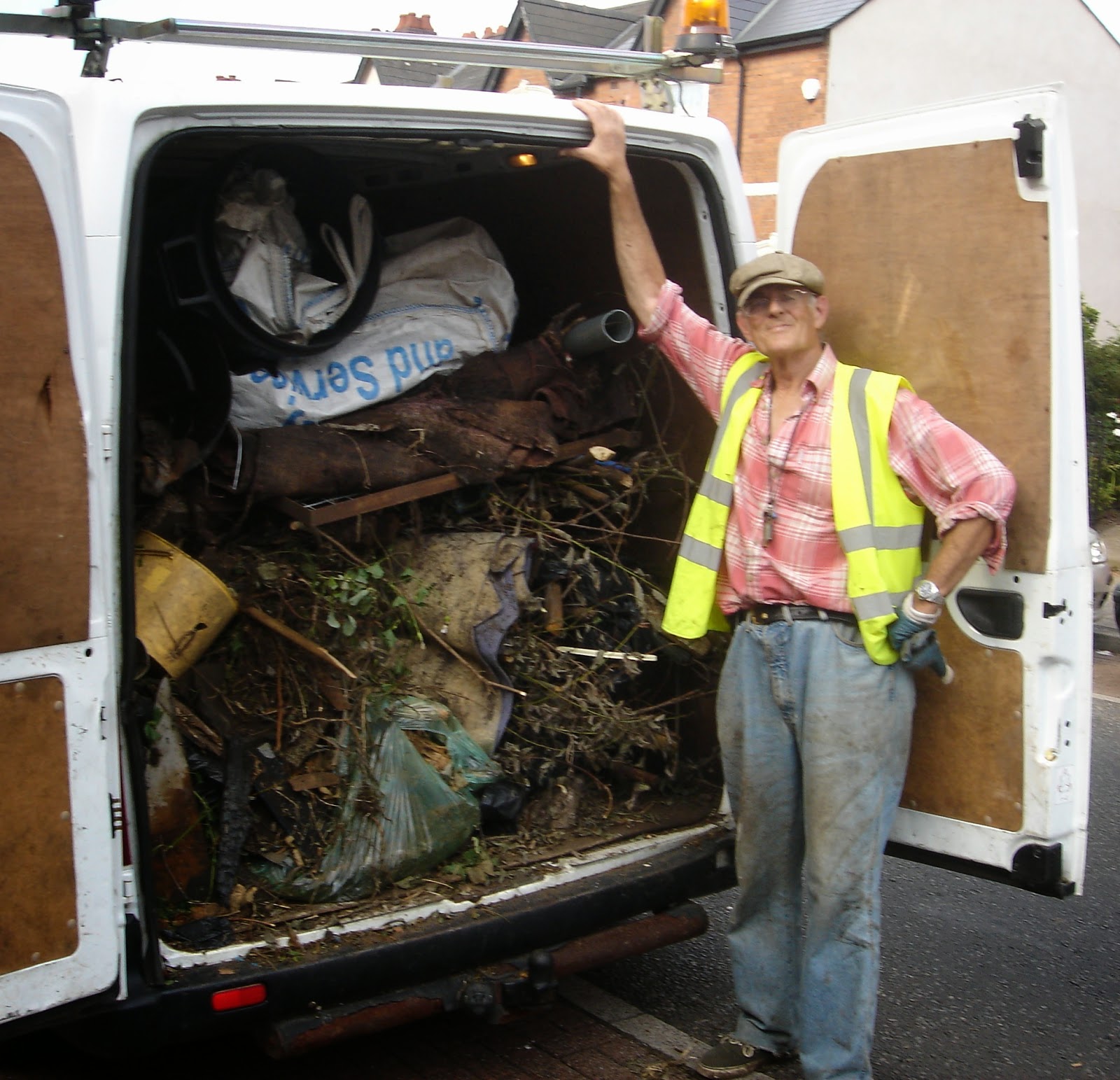 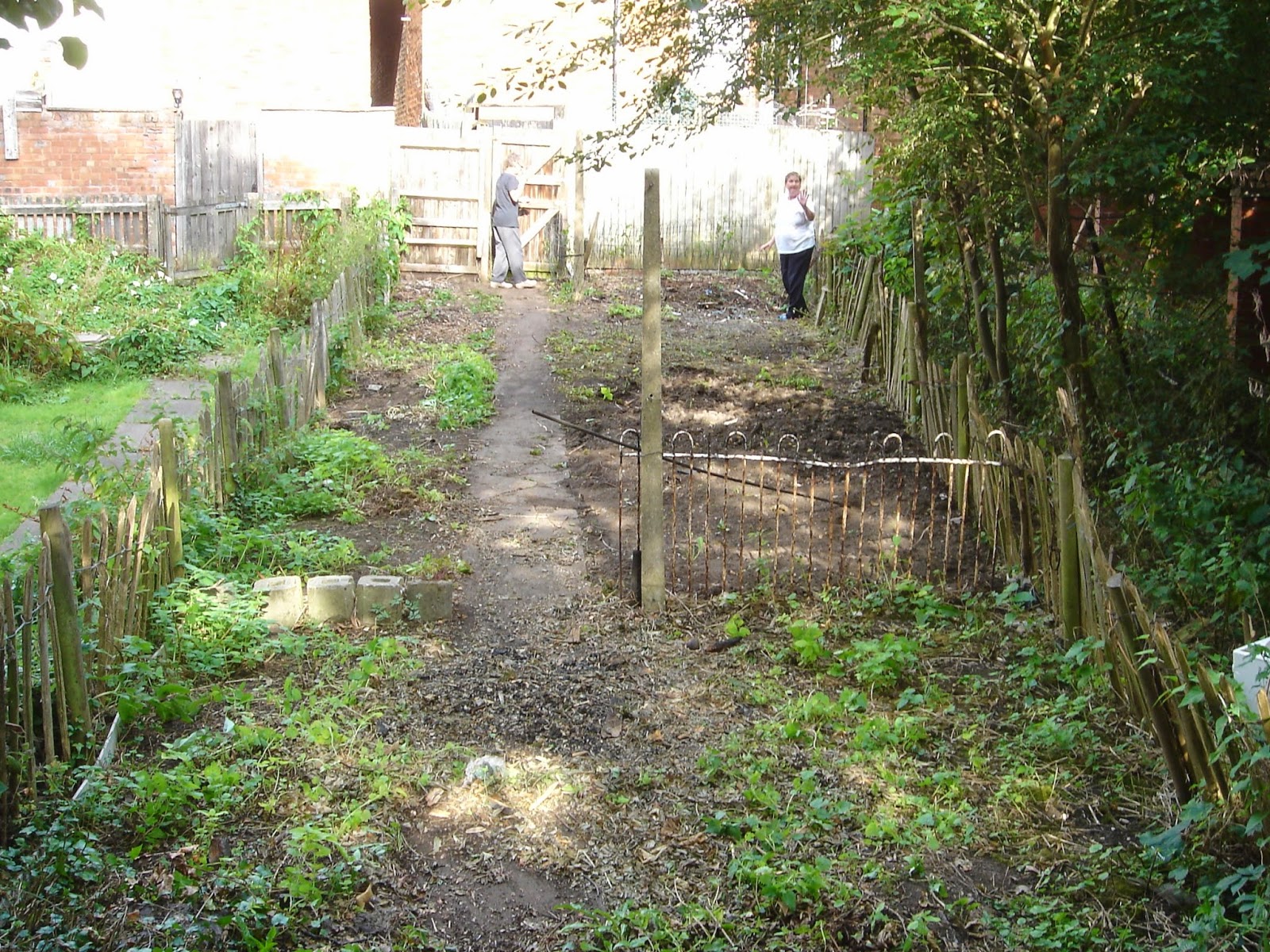 We've also used Google satellite to locate the premises from which the flytipping into this garden has been coming. We'll explore that later and Linda will phone the housing agency who are landlords of the adjacent mess of a garden to see if she can persuade then to tidy it. Much of the rubbish web cleared has leaked or been chucked from the gardens on either side of it. Paul and I took a ton and half of rubbish to Holford Drive where, on our way to the dry bay, we were entertained by Bob Bennett who's occasionally to be met playing his trumpet ...
"Do you have a CD?"
"Yes. And I add backing tracks. If you want one I'll leave it at the office next time you're here"
"How do I pay you?"
"No! no. Music's free"
I dropped Paul at his house and drove home for a shower and a change before we all went out for a roast beef and Yorkshire pudding at the Parson & Clerk in Streetly. Guy and Amy, and Oliver, and the new babe are staying with us. Elizabeth and Matt and Sophia came too - an evening out courtesy of my son-in-law.
"A pint of best, please Guy"
"Pedigree?"
That cool pint on this warm evening. So well deserved. Hannah Rowan slept through our meal in a hand cot at the end of our table. 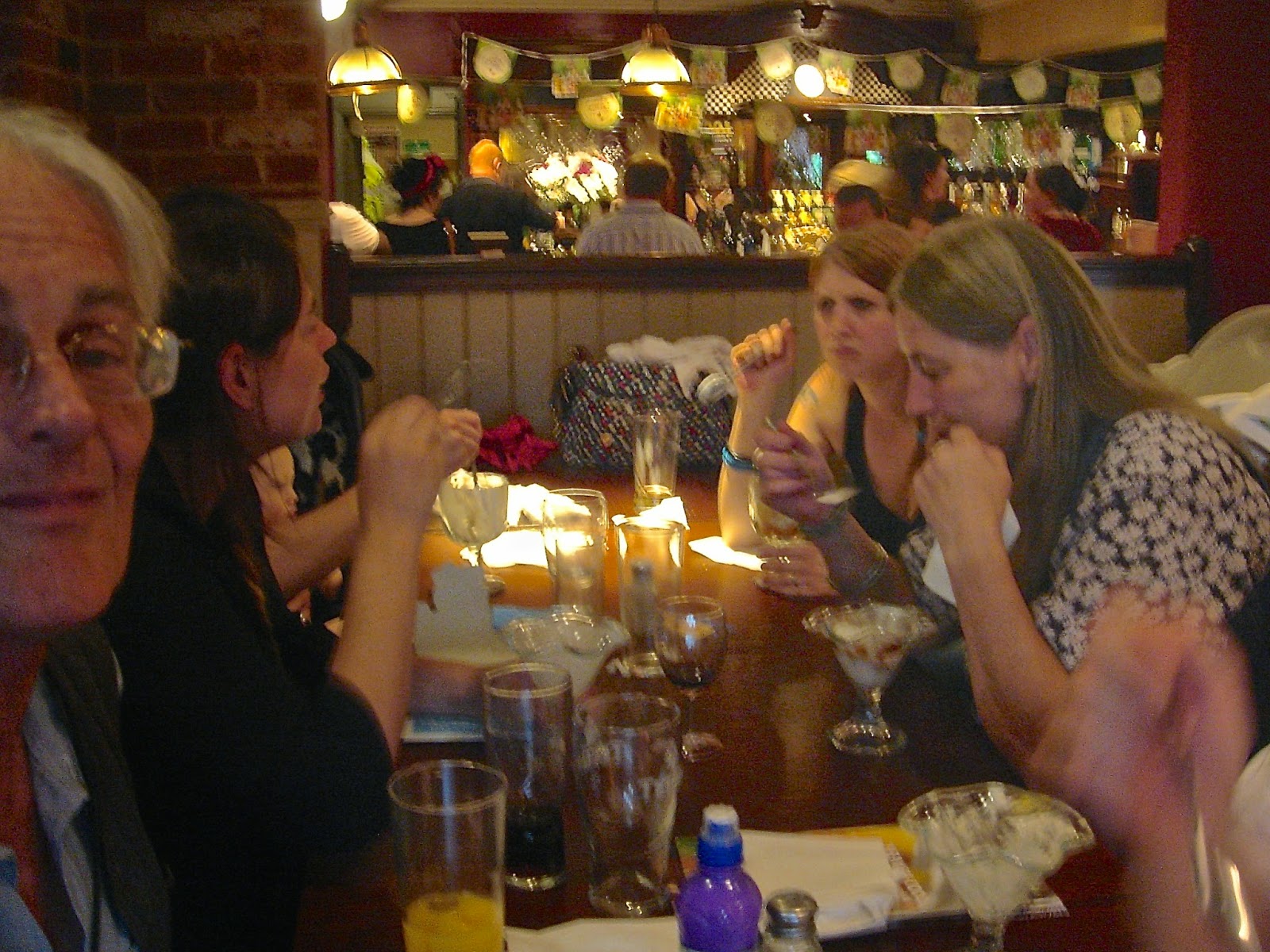 
Dear Simon / Dean. Thank you for the messages from you both a couple of days' ago: please accept my apologies for the delay in replying to you, but have just finished a stint of night shifts and have only just had the chance to catch you on my e-mails.
Am very happy to collaborate in the way you outline Dean. However, I do not currently have a pc capable of sending the data files for the sound and video transfers. However, perhaps Simon has the facilities to downland from the digibeta tape (i.e. Digital Betacam) transfers that I am currently in the process of making - and sending to Simon - of the 16mm film material and audio recordings of the commentary by Jack (could supply other formats than digibeta tape for Simon to send to Dean - e.g., DV / DVCAM tape or DVD transfers if that's easier for Simon to send). In any case, it's not a bad idea to have 'archive' tape copies of the raw sound and picture material anyway as a 'safety copy' of the original material, digibeta probably being the best format for this, being of full broadcast quality. One other point to mention is that the transfers I am making are of the British PAL 625-line / 50 Hz video standard, as opposed to the American NTSC 525-line / 60 Hz (or 59.94 Hz, to be pedantic) video standard. Possibly this may not be an issue for you Dean as you would be effectively working with data files? Best wishes, Francis

Dear Francis and Dean. Can you arrive at an optimal way to proceed? I rather imagined myself collecting a pair of DVDs from you Francis, representing the digitised film and sound tape from one episode, and then being able to send that pair by land-mail to Dean in US or others in the UK.  Is it more complicated? Of course (:)) Best wishes, Simon

I can certainly make DVDs (or extra DVDs) of the film and sound transfers for you to post to Dean if the two of you are happy with that arrangement Simon: from my point-of view, it would actually be the easiest arrangement.
As I say, the DVDs would be of the British PAL video system: it is possible to convert PAL to the American NTSC video standard (or vice versa) but there will be some loss of quality in the conversion process. Best wishes, Francis

I would certainly like to keep the process as straightforward as possible. DVD transfers passed through the post would work. If I had to make a wish it would be that if the dvd-transfer process in place could be make mpeg2 files instead of vob files, it would simplify things on this end. Here’s an explanation of that. Vob’s would be okay of that’s what’s practicable. The sound file format isn’t that important if it isn’t too lossy. Dean


Hi Simon. One critical factor at the cottage is going to be the skip. I can organise a skip locally, but prior to Saturday 02Aug14:-
1) We are going to need to get permission from the owners of the grassed area shown on the attached proposal.
2) We will need the skip to be co-ordinated with meeting Adam on Saturday morning at 9:00am.
3) The crockery etc in the kitchen that Lin may wish to keep needs to be boxed up so that it can be put away upstairs.
4) If you're going down to the cottage to do this, get the name (and number) of the skip hire company that is there at the moment (for the shop) - it's always written on the side of the skip.
5) Furniture being retained will have to be identified. The mattresses will have to be thrown away. Any items of furniture not required needs to be identified or put outside.
On the first Saturday morning, the first floor will be swept and vacuumed, the step to the main bedroom repaired, the windows weather-sealed and the furniture being retained will be put upstairs.
Everything else will be stripped out and discarded.
Are you & Lin able to do items 1-5 by then ?
Martin X 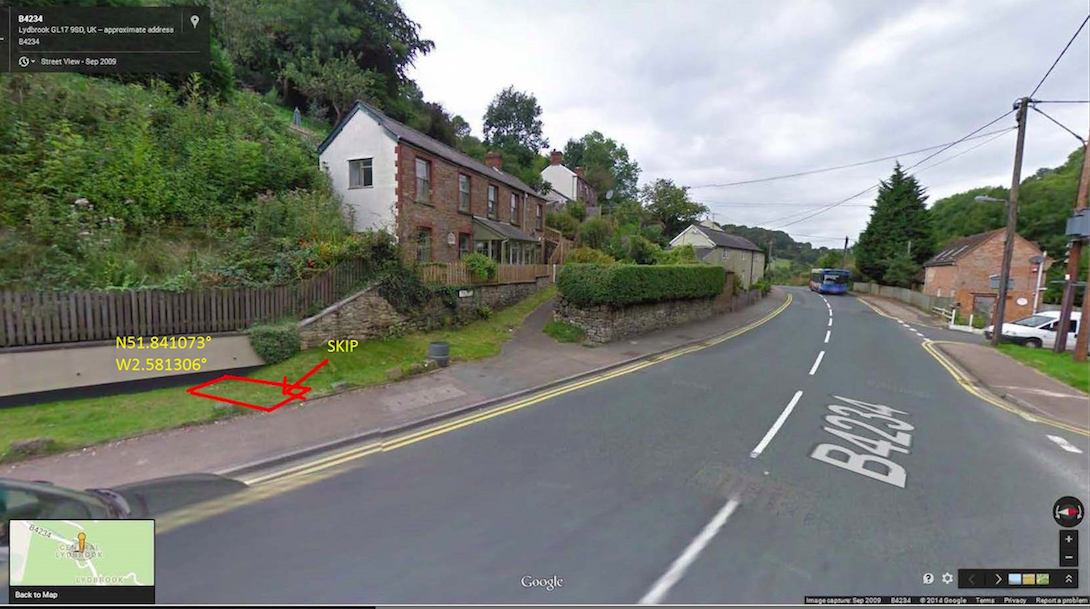 Dear Martin and family! You work fast. I so like that.  Here in Handsworth lots of people accord to the stereotype of olde country ways despite being in the middle of a buzzing city.
A skip we ordered today for clear up in Handsworth....Deep vexation with the delay and bribe-seeking drivers (“Can’t get in there, mate, more than my job's... etc”).  I decided to dispense with this company's services, but not until the man had unloaded his skip, then I asked for a discount on his whole day charge given his four hour delivery delay on a skip promised at 10.30am, meant we had the skip for less than 2 hours. He said ‘Take or leave it” I said “Leave it” and enjoyed watching him have to back the skip truck into an awkward space and take ti away empty. No work from us ever again.
Phil at the stores in Lydbrook owns that piece of land. I’ve just phoned him. He happily permits us to have a skip delivered to that spot on that date. He suggests phoning the day before in case there’s been an avalanche or flooding.  (Phil, Central Stores, GL17 9SA phone: 01594 860 302) I will do that.
The existing skip is one Phil has hired from Bell Waste 01594 542103. I phoned them. They only deliver/collect weekdays. No problem. We will order end of next week once Adam is quite sure 2/8/14 is a confirmed ‘go’. We will pay them over the phone. They say "don’t worry as we have loads of skips"
Lin and I say “Yes”  to 1-5. We will go down in the week before 2 August  to do the things required as well as being there on 2 August; possibly not on the dot at 9.00am but I will make sure the cottage door is open (prob leave it open after we’ve been there earlier).
Love Lin Simon