Standing close to their hive, seeing bees coming and going, I catch the enticing whiff of honey. Gill finally brought over new bees from the city teaching apiary at Highbury Park and placed them in the hive next to the shed on Plot 14. 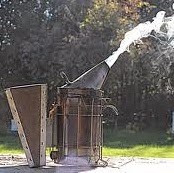 These new bees have been on the allotment about a fortnight. Yesterday, as I was earthing up potatoes, she arrived, donned her beekeeper's clothes, and made an inspection. Avoiding fast movements, she lit a bee-smoker, removed the lid of the hive and and drew out frames as I watched from the other side of the net enclosure I'd built in March.
"Wow!"
She held a factory floor held vertical, teeming with bees.
"They are making a Queen, which is what I was hoping"
She pointed to a larger beeswax sealed cell in the centre of one of the frames
"In fact they are growing two. So I shall have to remove one"
"They don't seem concerned about you lifting them up en mass and turning them over on the frame, Gill"
"They are a very mild breed of bee"
Yes, Apis Mellifera

"I'll check again in a week, but so far so good"
We are especially solicitous as the first hive Gill put on the VJA, back in 2010, had to be removed after complaints from a plot holder's wife who feared he risked anaphylaxis if stung. I pressed for their return and, after assurances about insurance liability and attention to health and safety, a hive was allowed back on my plot on condition I constructed six foot high netting around the hive to protect the public. Gill delivered bees in July 2012. They didn't survive the winter. More were brought in 2013. These were still fine in early February 2014 but then too many of the them went foraging during an interval of sunny weather. When wet weather returned, returning workers brought fatal damp into the hive with them.
"Wet weather is bad for bees" Gill told me as, in March, she inspected the empty hive containing a few small corpses and a damp patch, like a tumour on an X-ray slide, on one of the frames.

So now we watch and hope. I'm delighted the bees are back and that Gill has persisted. "If they continue as they are the hive could hold 60,000 bees"
A plotholder wandered over as Gill was packing up to go
"Your bees have been all over my hot-lips"
****** ******
An odd and depressing run-in with someone on the Villa Road. I'd just posted something for Lin, and was coming out of a hardware shop, having bought a new bolt for the gate into the beehive enclosure. I passed, in the shop entrance, the man I recognised as having taken a plot next to mine a year ago, and then swiftly abandoned it. We'd had an amiable chat at the time he arrived, seemingly keen to grow things. But as is too typical of allotments, he soon abandoned the plot, leaving a pile of recovered building rubbish intended for a 'summer house' he'd spoken of building. He left under a cloud, annoyed with the VJA committee who, he claimed, had let him down when he'd tried to chop down the hedge and tree overlooking his plot. They said he should not have done it.
"Hullo" I said
"You can fuck off"
"I don't understand"
"I want nothing to do with you lot. Leave me alone. I'm with my boy"
"My lot? What is the problem?" I said and waited. The boy stood silently beside his father.
"I'm saying nothing to you. Piss off"
I remained standing on the pavement; then followed him back into the hardware shop.
"Right" said the rude man "I'm calling the police"
He dialled 999 on his smartphone.
"Police please... ... ...This man won't leave me alone. He's following me. Yes. I'm on the Villa Road - with my boy"
I cycled off to continue shopping. On my way home I cycled past him and his son walking in the same direction, still talking on his phone. Seeing me he turned and headed back the way he'd come. The boy followed.


A Police Neighbourhood Team transit van drew up. I wheeled my bicycle up to it; Oscar in the basket.
"You can stay away. I'm talking to them, thank you." said the man
An officer descended and took me aside, keeping an ear open to his colleague's exchanges, as he took down my contact details and asked what had happened. I did my best to explain the last few minutes'  bizarre experience.
"You seem a lot more compos mentis than the other gentlemen" he muttered and tucked his notebook away "I've got all I need, thank you"
*** *** ***
I'm not unhappy about progress on cultivating my allotment - slow though it is. We all now know that the soil is testing - stony, uneven and full of detritus. Experienced gardeners are doing well, but many others have given up. The plots on both sides of mine are typical. The committee have given me permission to scythe the one on the west side of Plot 14, but a new tenant on the other side must be allowed his own time. I am aware that where I and Taj have dug in manure the ground works kinder. It weeds easier. it grows better. I will persist with this work on the soil - despite the cost of manure. 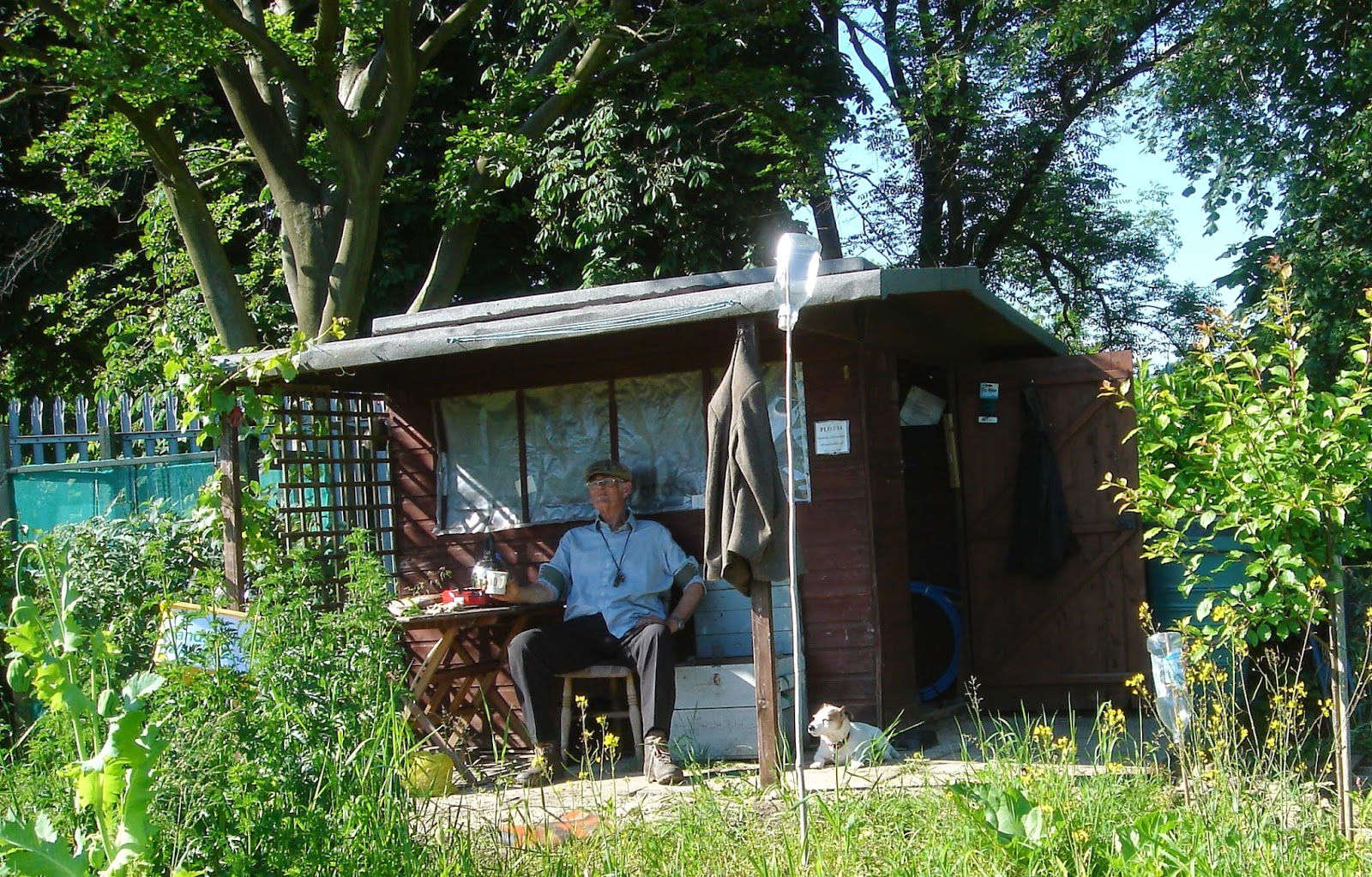 Vanley dropped over to my plot at my request.
"You can take up all your garlic" He set to pulling it all up
"Get me a bucket of water" 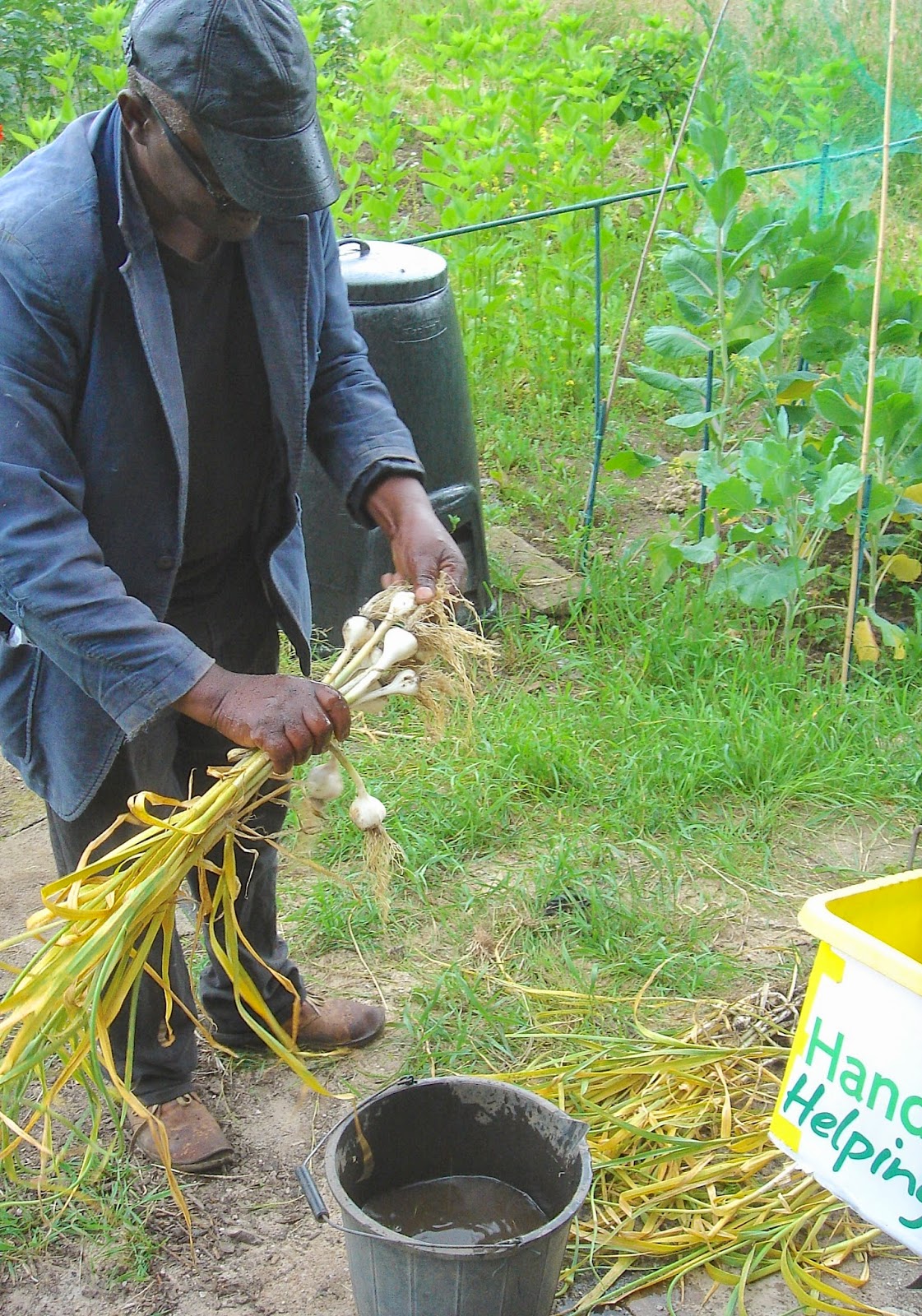 He sloshed all my pulled garlic clean and hung them in the trellis of the shed... 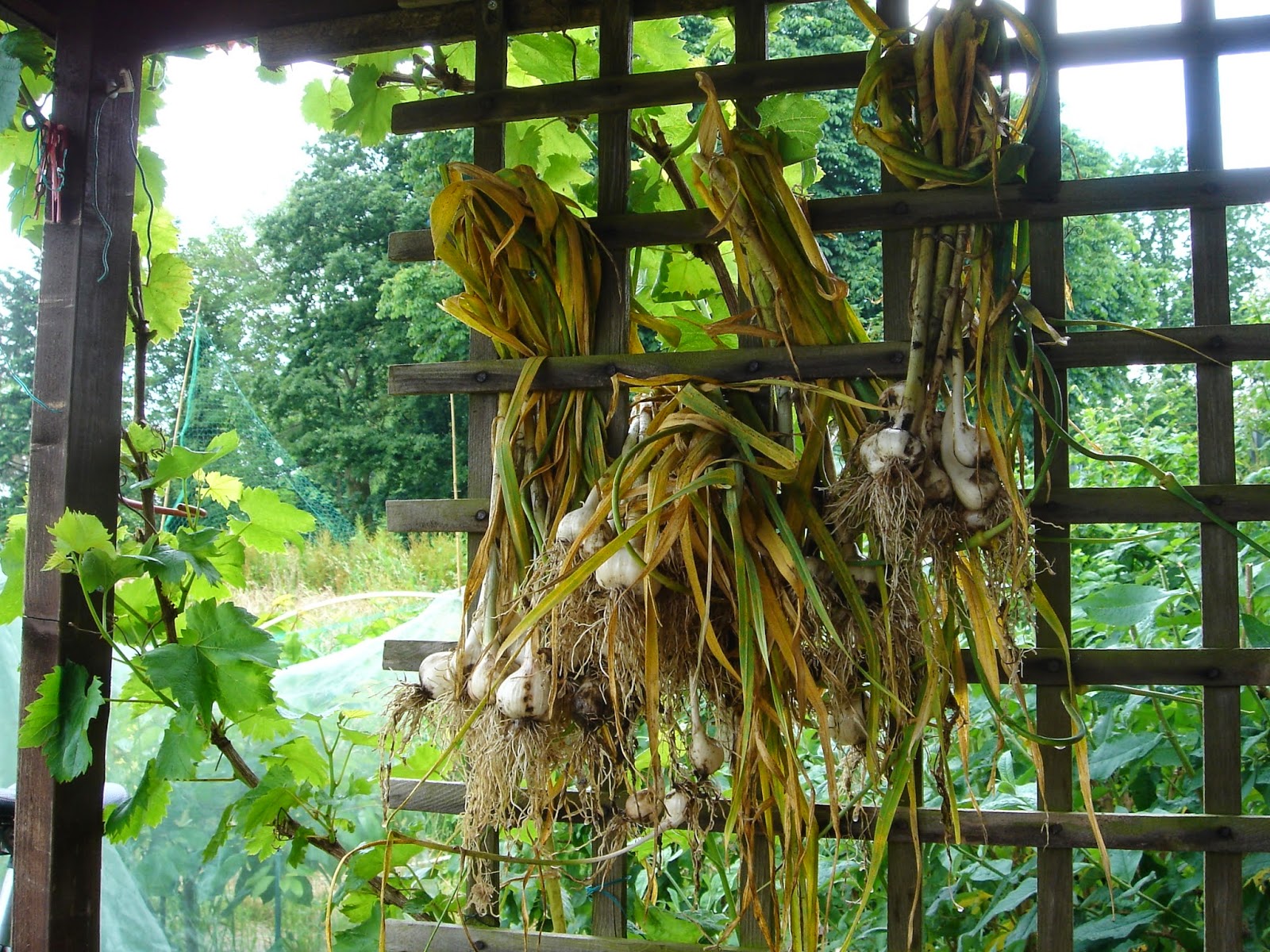 "They look good like that. You feel like a hunter-gatherer?"
"You teasing me, Vanley?"
"They'll last a year. Plant the next lot in winter"
I peeled a small garlic bulb and ate it, enjoying the hot pepper crunch of it.
Your cabbage has all run away. Just pull it all up. If you have a rabbit they'll like the leaves. You should harvest your broccoli now, before it seeds."
I cut a dozen florets, and dug up a small crop of new potatoes, while earthing the rest. 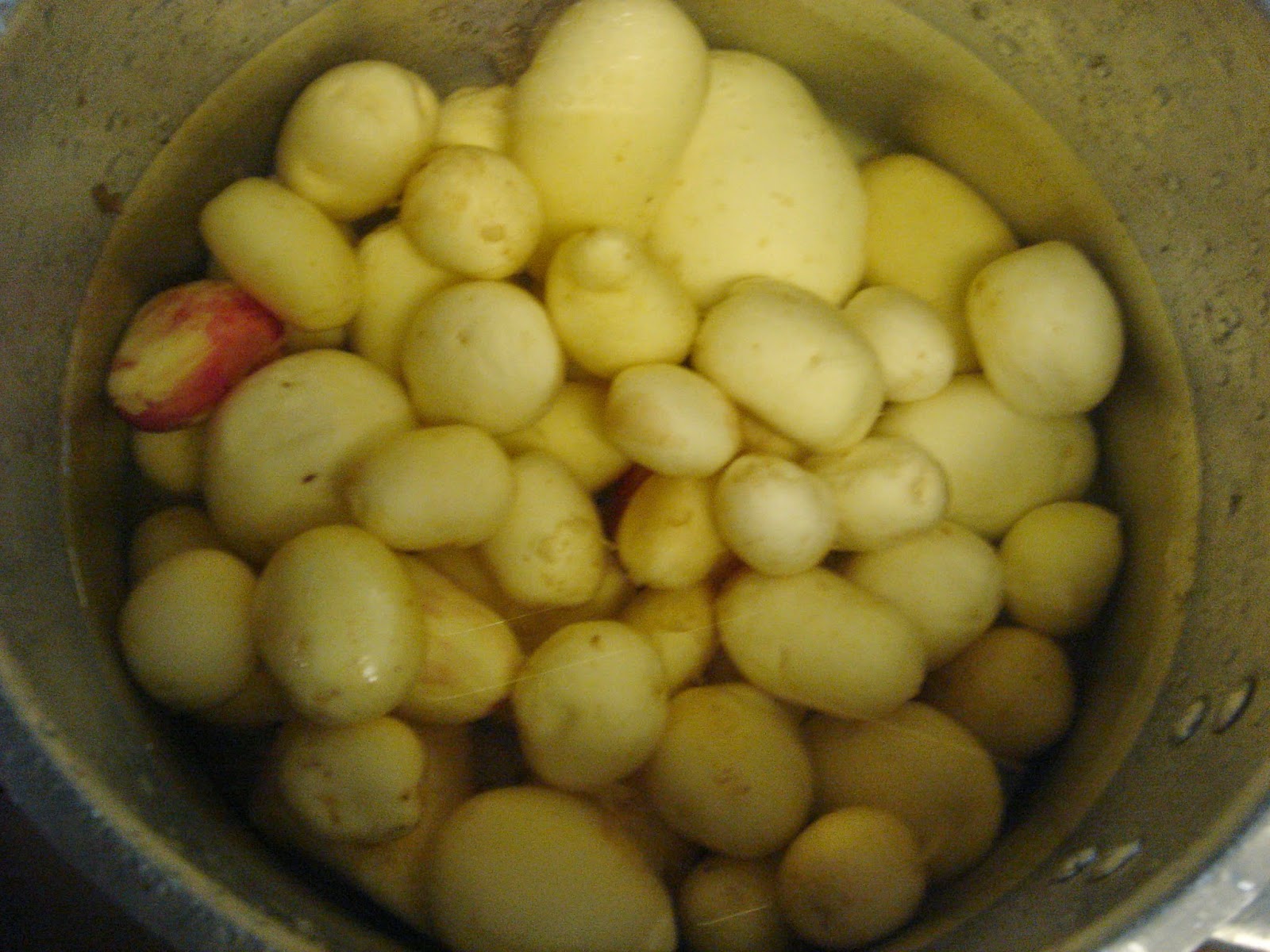 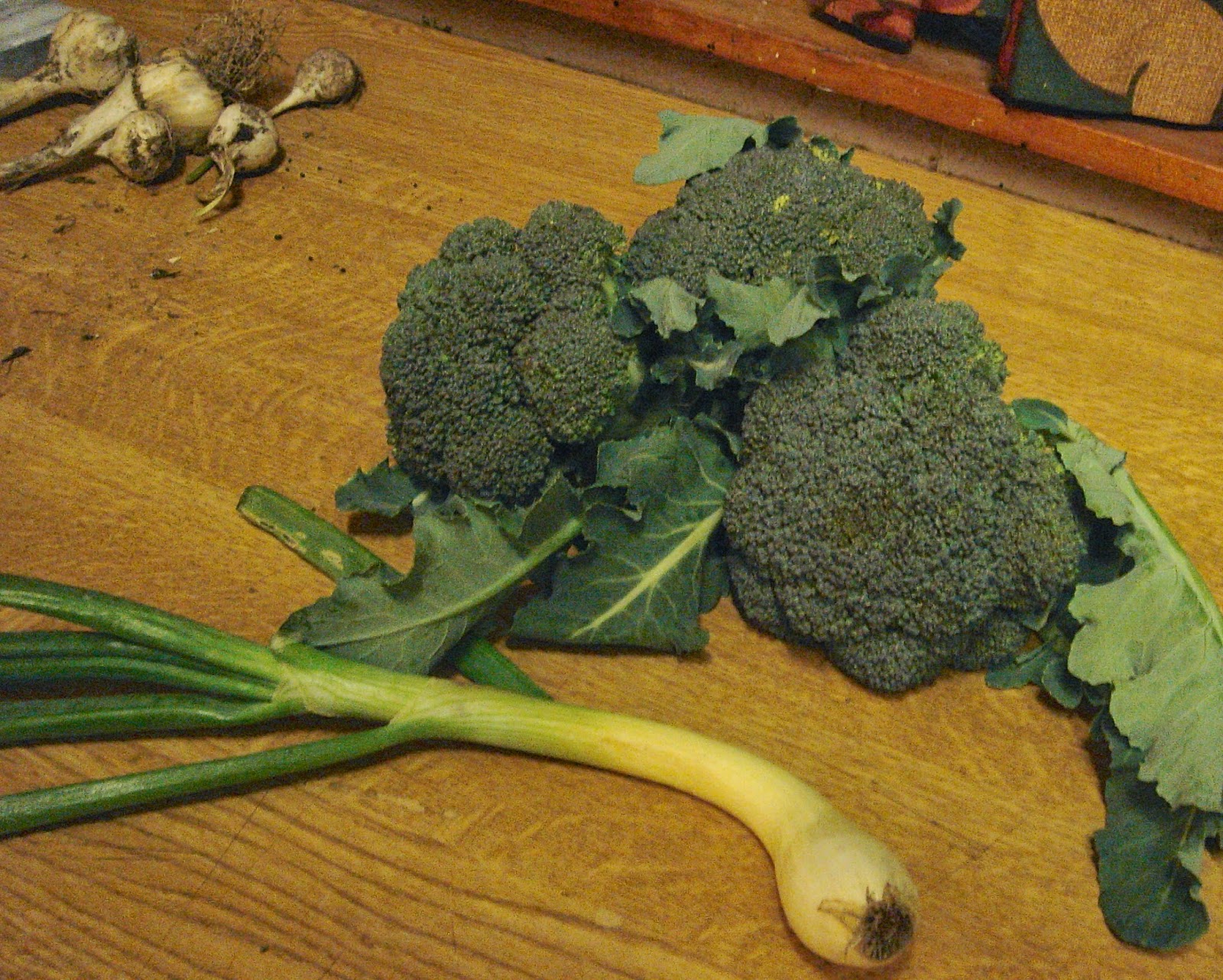 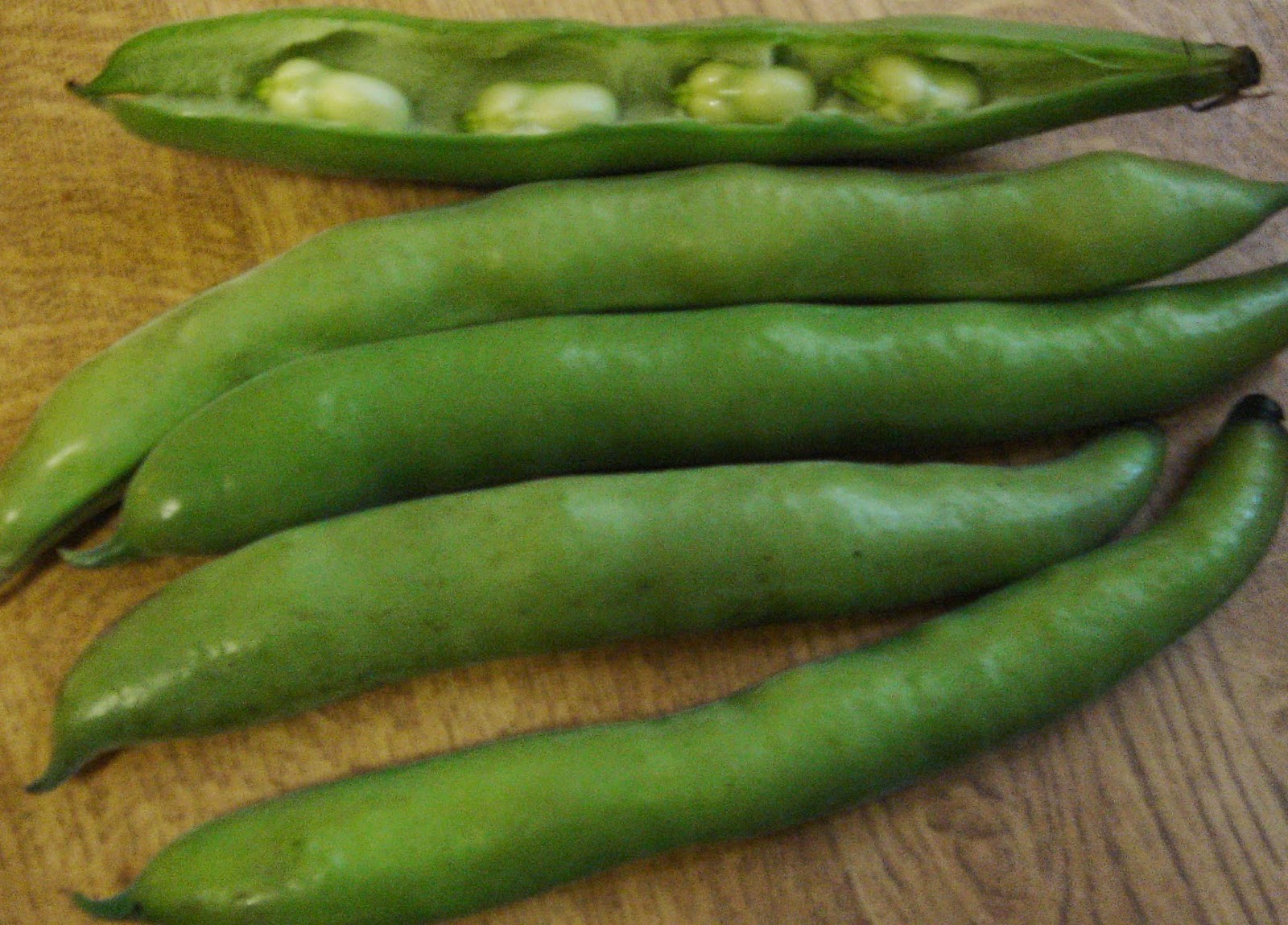 Vanley walked up and down the plot.
"Get some more plants in. What about tomatoes?"
"Yes. Runner beans. Peppers. Marrow. Brussel sprouts"
My cabbages are a 'runaway' failure. A dozen cauliflowers don't look healthy, but the Jerusalem Artichokes are looking fine, as are my broad beans. The onions I planted in March are looking unhappy. Vanley shows me the yellow tinge on the flesh of a couple of sample onions. "Onion fly"  - a pest plaguing the VJA these last two years. There;s fruit on both apple trees. The other three fruit trees - pear, plum and cherry - didn't blossom. Too young?
Like
*** *** ***
The 'traditional' borders - actually boundaries of nations called Syria, Lebanon, Jordan and Iraq set up in 1916 under the Sykes-Picot Agreement - are more fragile and permeable than the one between Russia and Ukraine.

While the UK glues to Brazil. ISIS (The Islamic State in Iraq and the Levant) and its supporters are speaking triumphantly of ignoring post-Ottoman colonial borders (those distinctive locality severing lines drawn over the Middle East a century ago by the English and the French). ISIS are 'nation-building', determined to restore a fundamentalist dominion across the Middle East. How may this Levantine struggle play out within the urban populations of Northern Europe? The silence from our government is palpable. One may imagine the wringing of hands in those corridors. I watch and learn and feel safe in green England. My very dear friend in Baghdad, writes:


Dear Simon...it seems there is a wide scale attack on the country by terrorist groups, rebels and foreign fighters. The wrong policies of the PM Nouri Al-Maliki have aggravated the situation. The whole political process is at stake and the coming days are very decisive in keeping the unity, integrity and safety of Iraq. I hope this will finds you well, I miss you my friend. Best regards, D.

Greek people are inured to uncertainty. The Greek word abebaios - αβέβαιος - means “without a foundation, unsafe”. It suggests that uncertainty emanates from a lack of structure in the Greek world. Question marks settle themselves on almost all social issues.
Perhaps only those who have emigrated and – with spectacular success in some cases – made new lives elsewhere, found something more certain.
All this is by way of a preamble to the fact that Greece hasn’t known this degree of uncertainty for many years.
Of course, some things are certain: the economic situation and all the hardship it has entailed. But no one seems to know what to do about it. The entire issue of a “Greek identity” is up for debate. What does it mean to be Greek? To come from a quiet, rural, inward-looking state into the current chaos of the EU in which it is expected to be European and yet at the same time retain its Greekness?
Was Greece ever ready to join the EU? Was it necessary to adopt the euro? Did it deal appropriately with the eurocrats when the bailout crisis loomed? These may be political and, above all, economic issues. But at heart Greeks are wondering – and have been wondering for at least the past century – what westernisation and modernisation would really mean. And no one has come up with an answer....(17 June - continued)