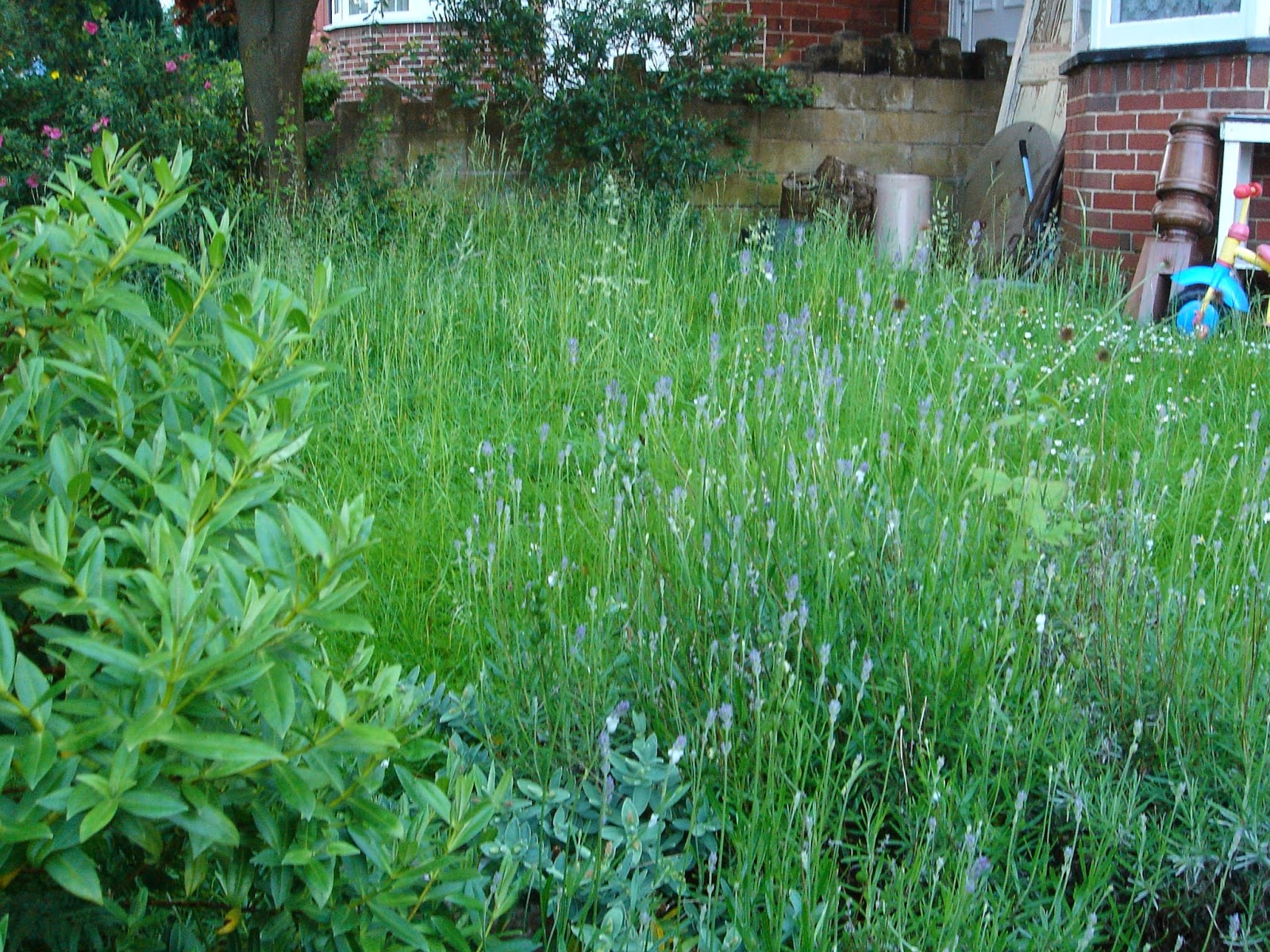 The grass on the front lawn was too much for the mower. I scythed... 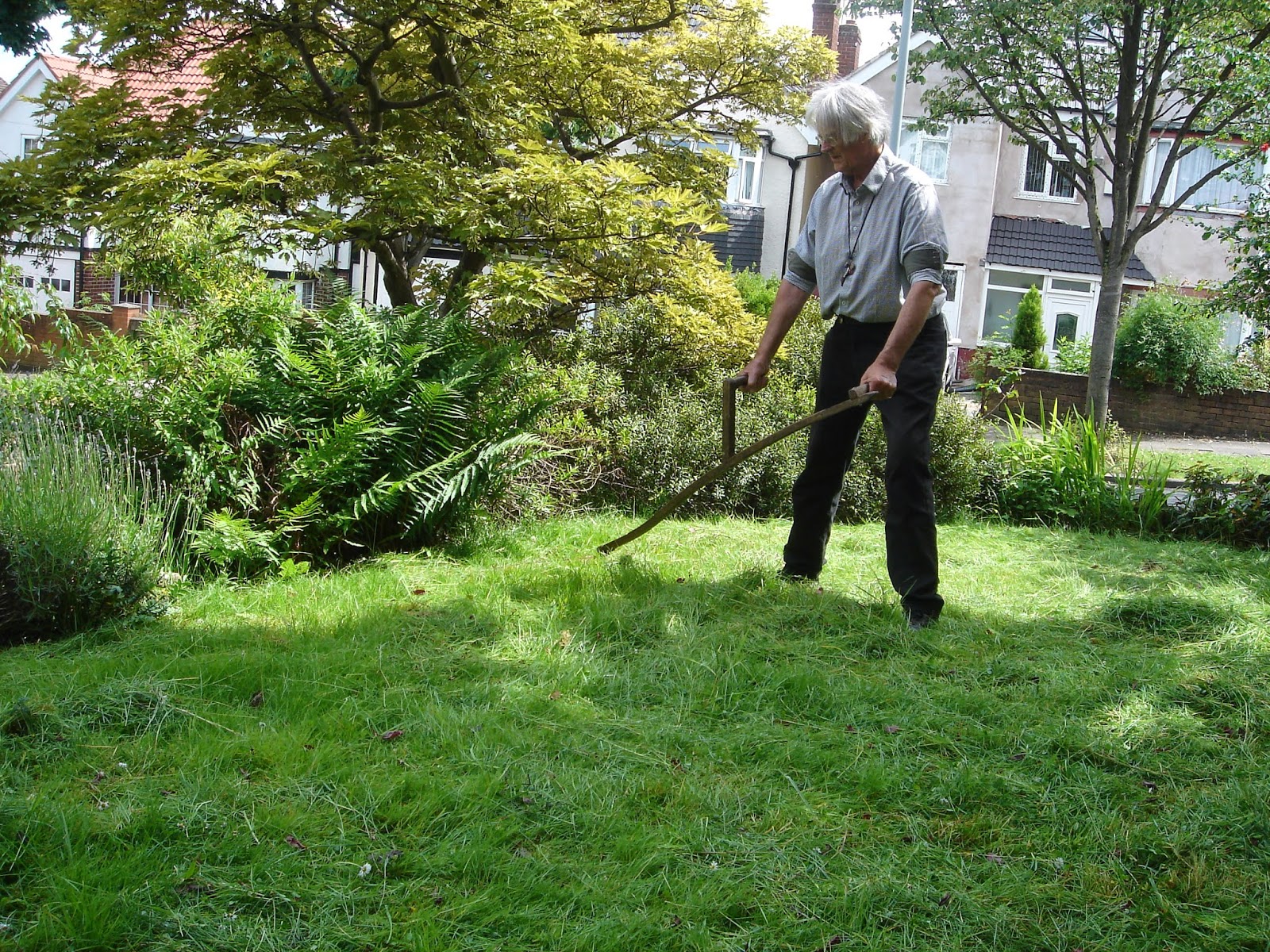 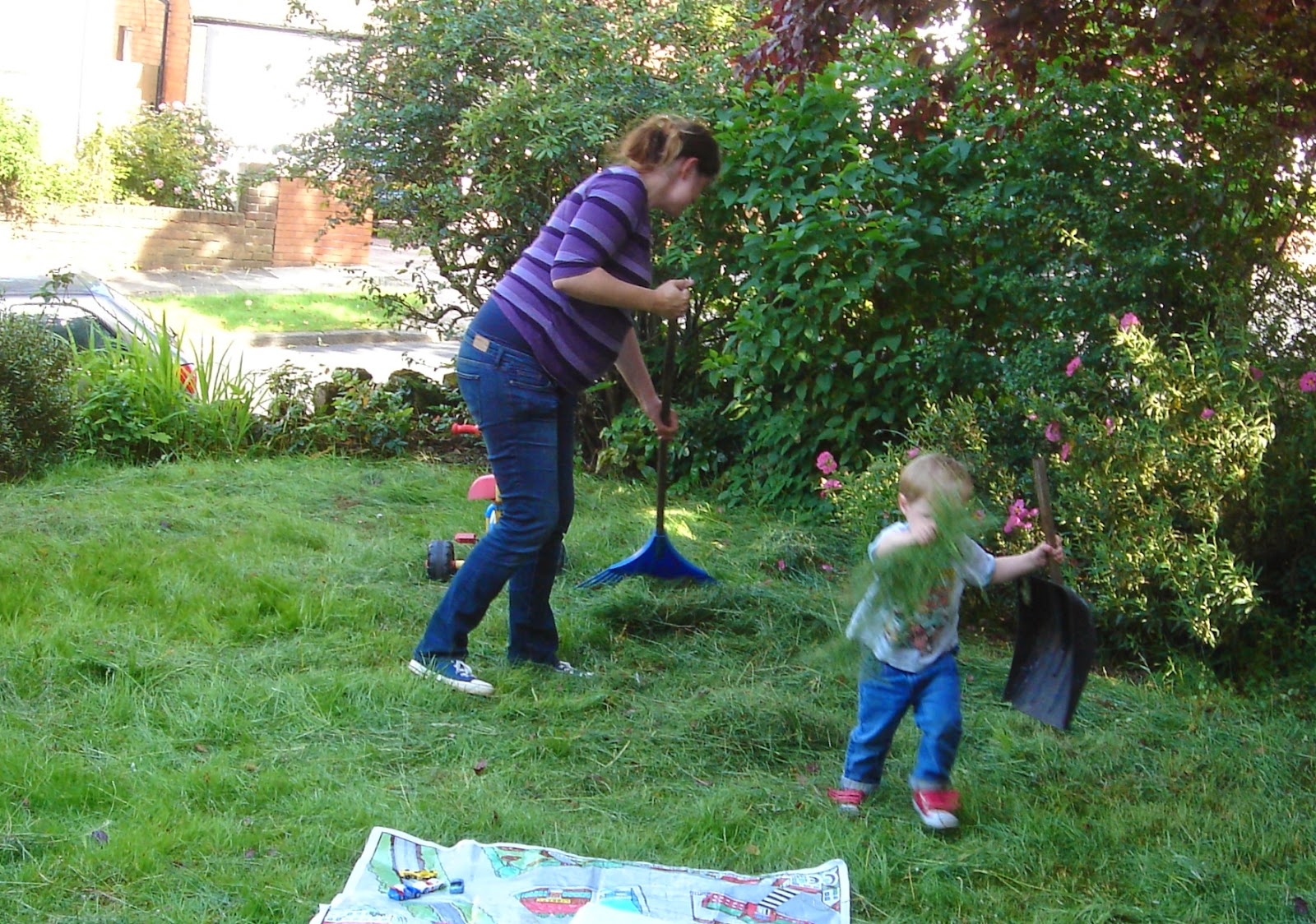 Today has been sunny. We expect thunder and rain tomorrow. About four weeks now to the birth of our grand-daughter. It seems a little unreal. Amy held my hand on her tummy. I didn't feel the movement she can feel regularly.  Our son came round too. He's posting some of his best photos on his biog...his ruminations on the odd mix of 'souvenirs' in shop windows in Marmara.
"They're a bizarre mixture of things to buy anywhere. Not really to do with place. The Eiffel Tower. Cutty Sark. The Statue of Liberty!"

Almost hearing my own parentheses I said "It's a potent example of contemporary placelessness, Richard! Are they all from China?"
"See how in one window there are figurines of historical figures, and below them china caricatures of copulating pandas and pigs. Then another window with wooden turtles and below them knuckle-dusters. What's that about?"
Yesterday morning, we left Ano Korakiana where our tasks are measurable pleasures, to Birmingham's less well formed and often more irksome duties. We left our incomparable view, a summer haze beyond Vido...

...running in the last hours through our familiar checklist; read meters, turn off water and electricity; leave fridge door open, keys, chargers, lock gates, pack a book to read on the plane, remember passports, boarding cards!  Then, with suitcases in the car and a hug for Katerina, Vasiliki and Effie, we're driving south. I heard Effie remark
"Δεν τ'αρέσει να αφήνει He doesn't like leaving" 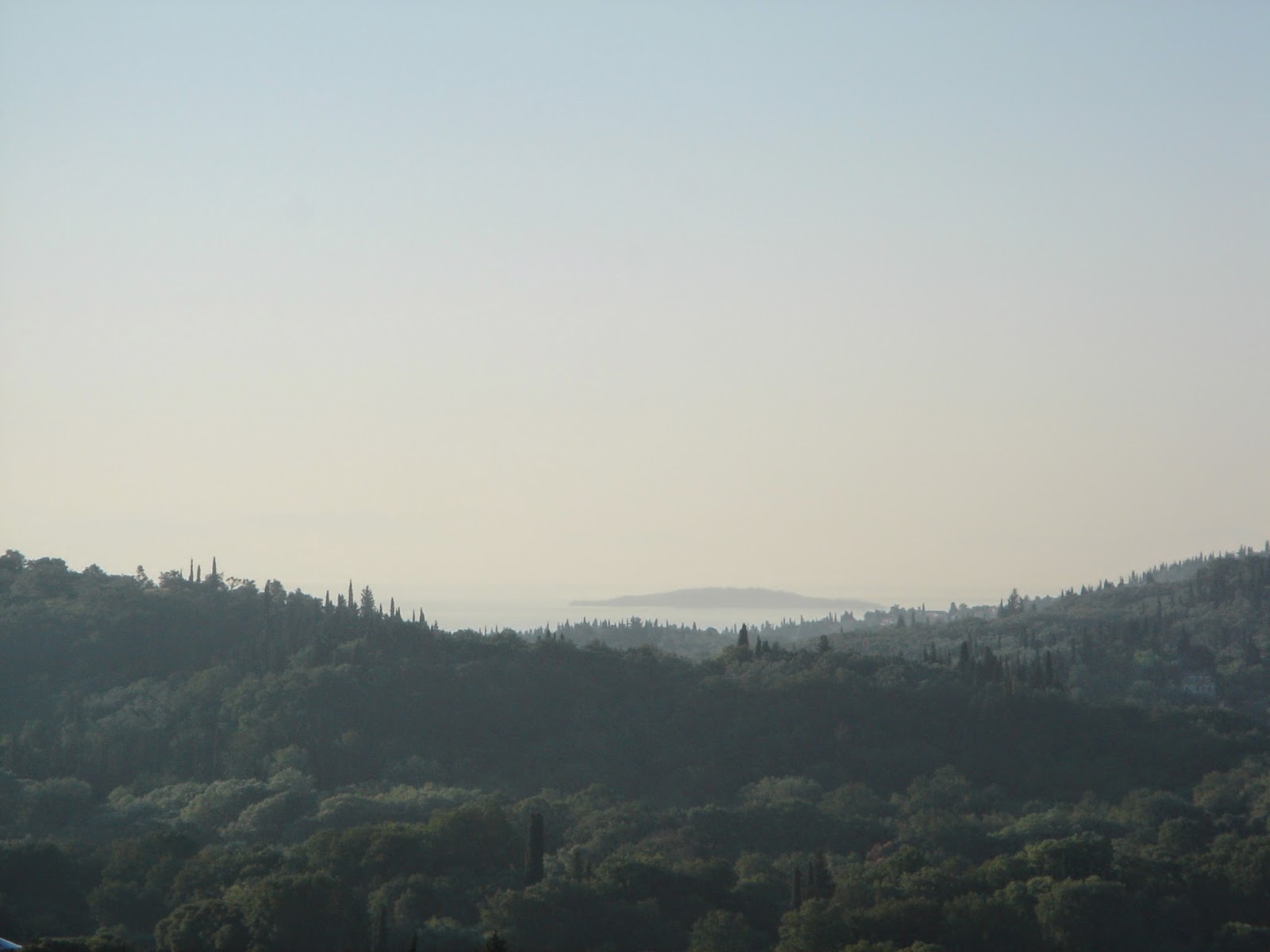 "Damn!" said Lin, as we joined the Sidari Road "I left potatoes and onions in the cupboard"
"Smell!"
"By the time we're back they'll have dried up"
The airport was busy. Lin went to get in a check-in queue; I to the car park. Yianni was there.
"We don't want to go"
"I phone a bomb"
"Ha ha"
"Have a good summer in England"
"See you in September"
Then after an easy wait among holiday makers we're on our way to the waiting plane... 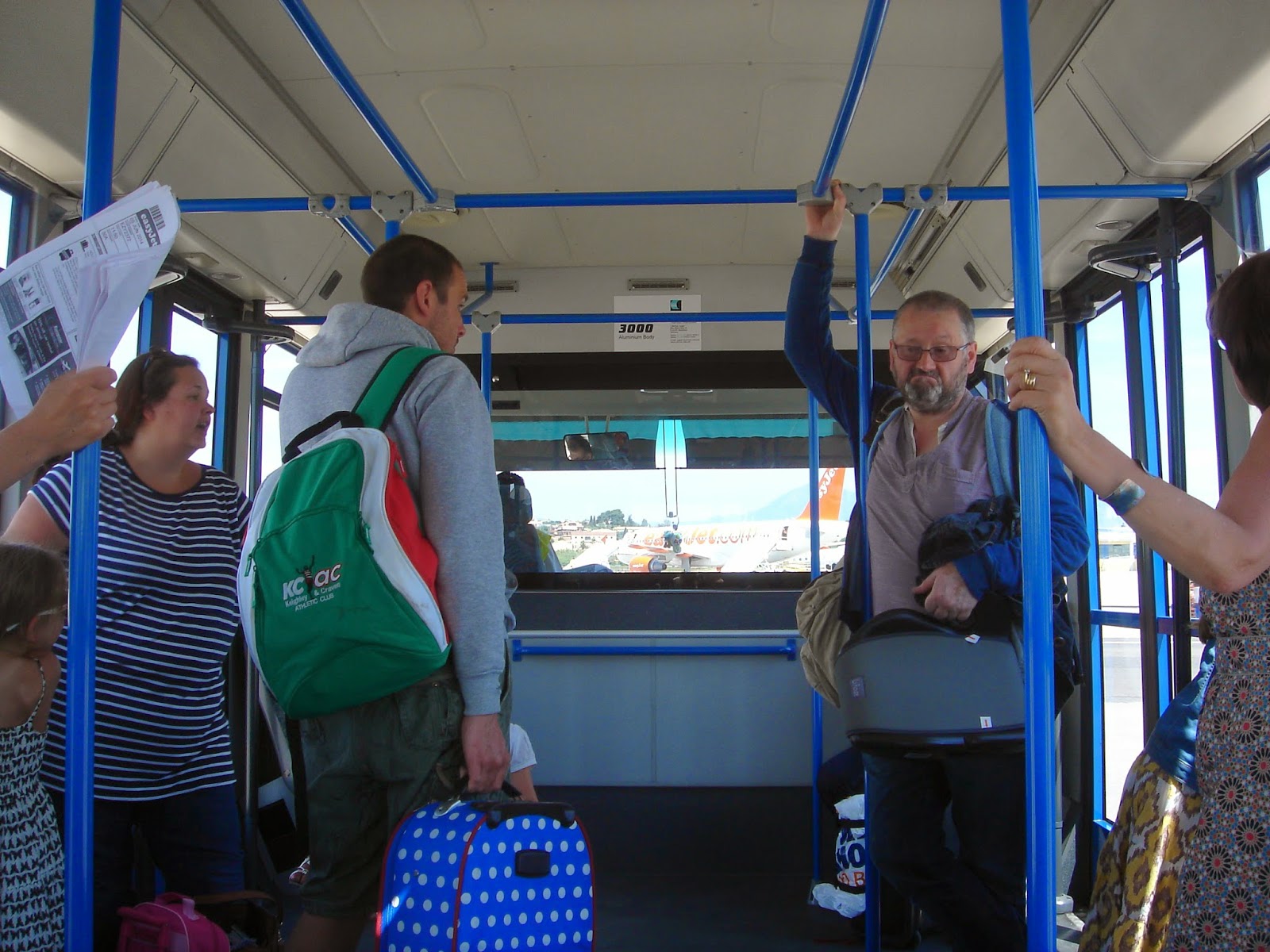 "What have we done this time?"
"Your steps to the garden"
"Not finished yet" 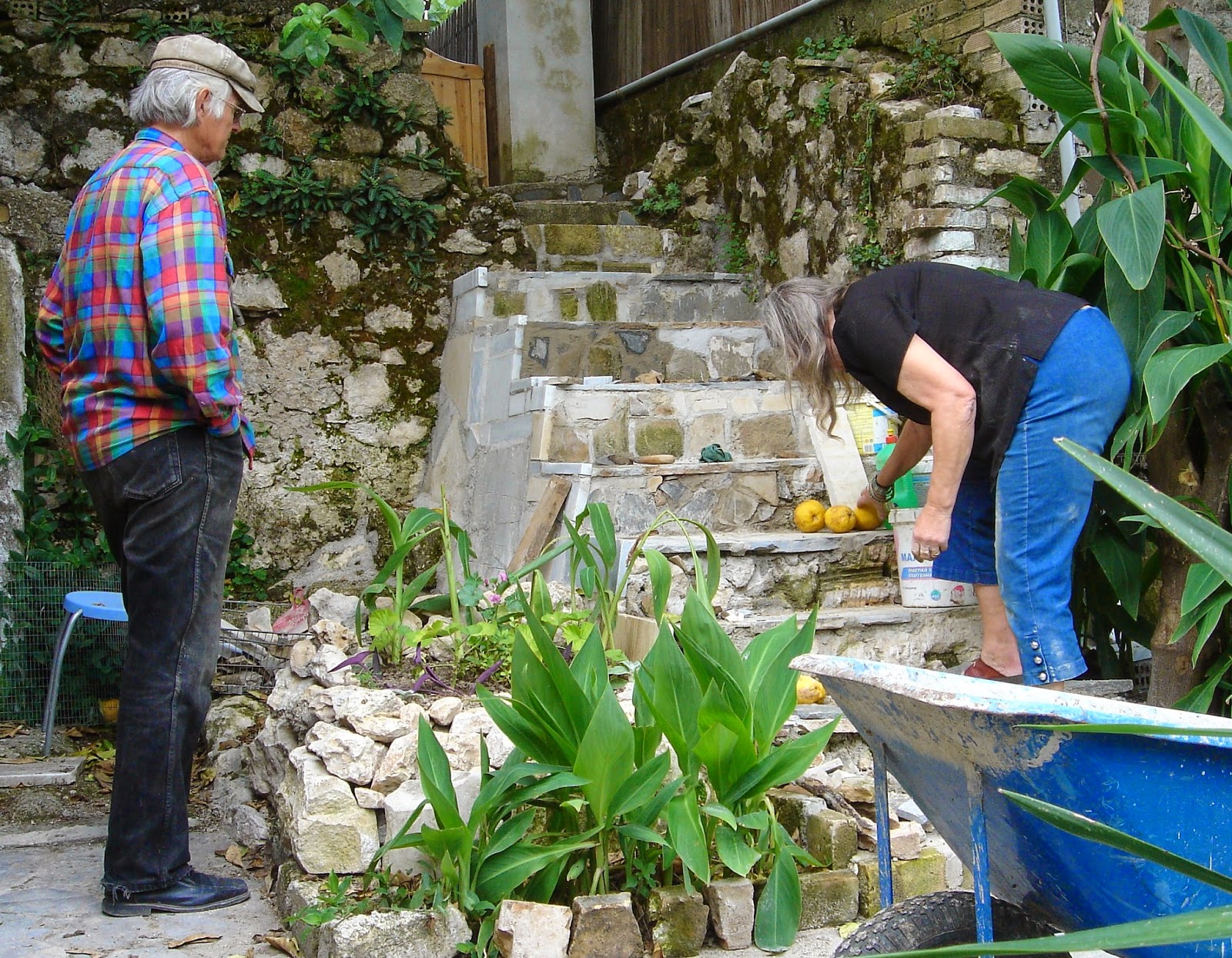 "You've also stopped the worst of that regular pong from next door's leaking soak-away"
"We finished Oliver's room"
"Yes. That was a messy store-room. Now it's got skirting boards, trim, door frame and furniture painted, new curtains lined and hung. But we need shutters for the window"
"He liked his room. And I've touched up all the wood shutters where their paint was flaking; sanded them, undercoated and repainted. And the wooden window frames upstairs. Oh! And we made that mosquito-screen for the stable door in the dining room. What a business getting the curve at the top! I made a new gate for the garden, out of the end of a piece wooden cot I found in a wheelie bin" 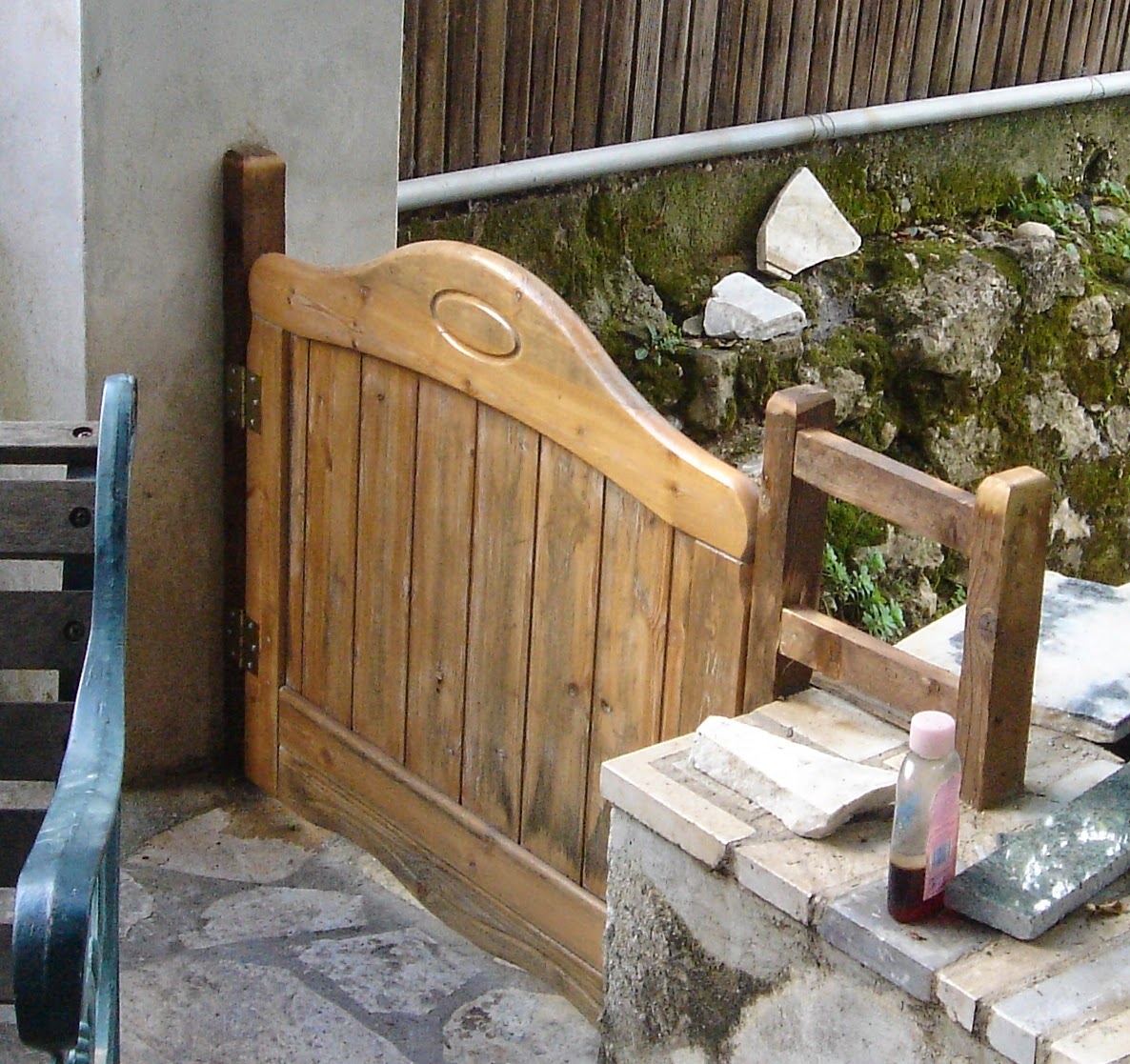 "Put up a canvas to stop rain coming through the balcony onto the veranda"
"Had several outings in Summer Song. One on my own. Getting to know the new engine. Made a list of jobs for Dave for when we get back." 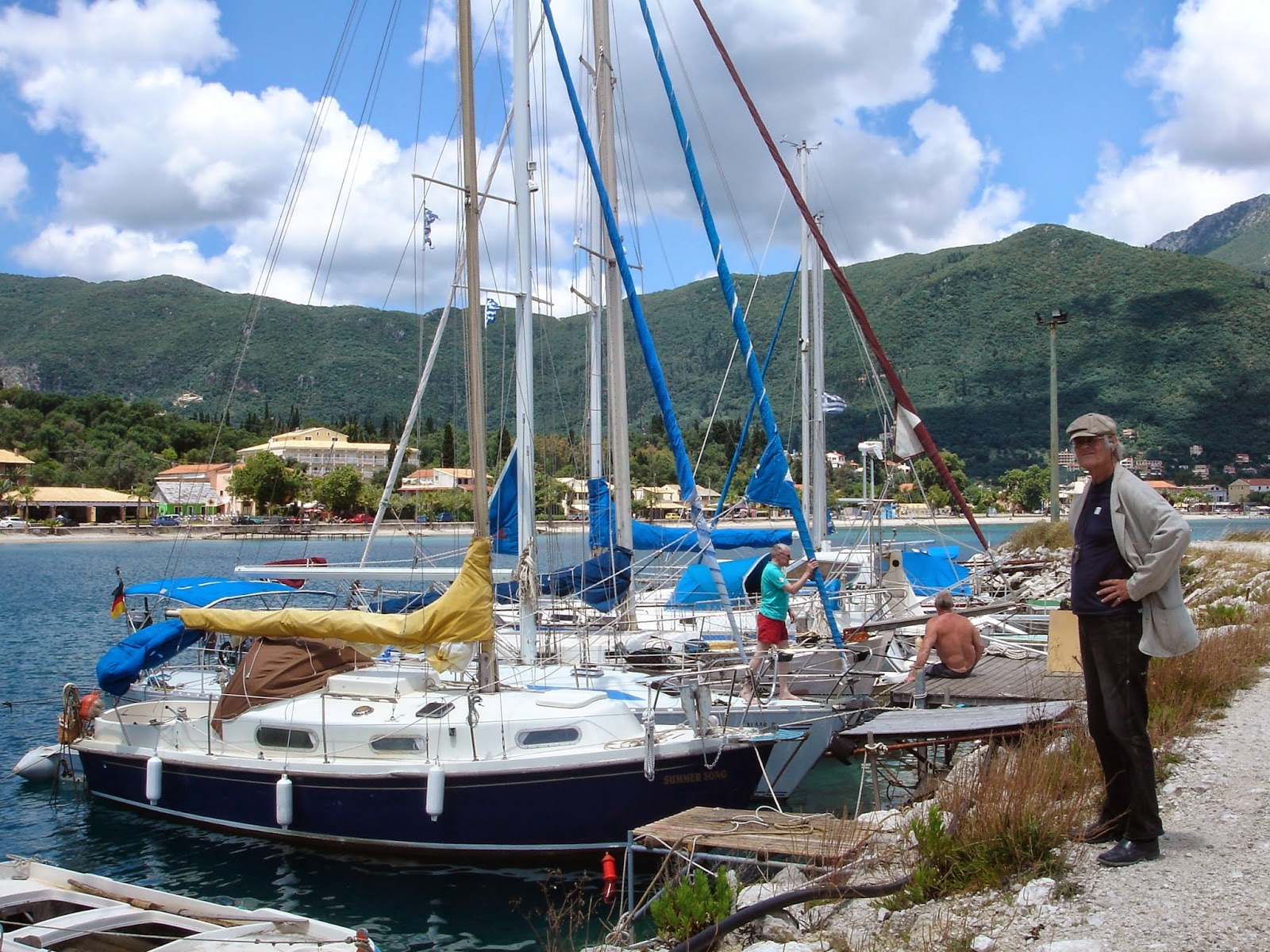 "Renewed the worst planks on the balcony. Rebuilt an old table"
"That'll go in the dining room as a side table"

"We went on with learning Greek. Michel Thomas Method and Rosetta Stone"
"Ha!"

"Learned more from Angeliki and Tassos about their grandfather, Aristedes Metallinos. Got the references about him checked - in Greek and English - ready for another go at at a Wiki piece about him"

"Easter in the village. Another cross on our lintel. The family to stay during April into May."
"Despite the wet weather!"
We recalled our friends in the village. Meals together. Drinks at Piatsa. Lefteris, Vasiliki, Natasha, Effie, Adoni, Cinty, Paul, Mark, Sally, Barry, Kasey, Steph and Wesley.

"Wes has helped with the iron framework for the vine in the garden. Brackets to hold the cross pieces"

We worked through a pile of mail awaiting us and enjoyed Oscar. There's lots to do - a two day course on which I'm tutoring coming up after the weekend, the cottage in Lydbrook, our allotment, the coming new grand-child, more work with Handsworth Helping Hands, the two Wiki pieces, more language learning...
...and I've had a haircut at last, from John Rose's Afghan barber, at the corner of Chantry and Hamstead Roads - £4.50. 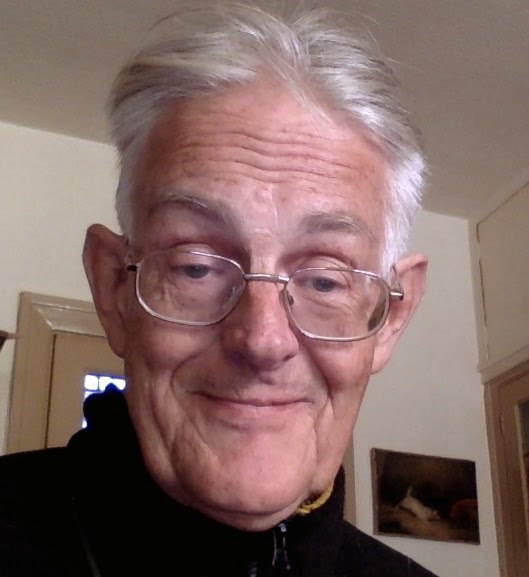 ...and now I'm definitely back in the UK 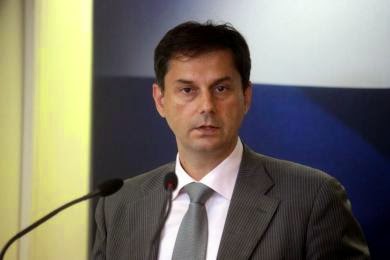 The Finance Ministry’s general secretary for public revenues, Haris Theoharis, resigned from his post on Thursday, abruptly ending a job that was created in 2012 under pressure from Greece’s troika of international creditors with a view to making the country’s tax administration more independent. The official explanation for the resignation of Theoharis, whose term was scheduled to run until 2018, was “personal reasons,” but it was clear that he had irked some government officials with his methods and that he was pressed to step down. Among the decisions believed to have annoyed government officials was his recent attempt to tax Greek bondholders retroactively, a move that prompted a quick about-turn by the ministry. Theoharis defended his record. “I don’t feel like I’ve been made a scapegoat because something went wrong,” he said. “Those who feel that something went wrong should look at their own actions,” he said. The 43-year-old emphasized that his job had been to enforce policy decisions, not to formulate them. Minister Yannis Stournaras, with whom Theoharis is known to have had a good relationship, thanked the latter for his “ethos, integrity and respect for the public interest,” adding that his efforts had bolstered Greece’s tax reforms and helped meet fiscal targets. Theoharis’s departure made waves beyond Greece too, with a European Commission spokesman expressing “serious concern” at the resignation. Noting that Theoharis had played a “key role” in improving Greece’s finances, Simon O’Connor insisted that Athens must not lapse on reforms. “It is essential that the government ensures full continuity in the delivery of planned reforms to improve the efficiency of the administration, combat fraud and evasion, and secure increasing government revenues,” he said. The statement irked the ministry, which said the EC spokesman was “wrong” to express concern at Theoharis’s departure. Meanwhile it emerged that Stournaras, who is widely expected to leave the ministry in a cabinet reshuffle in the coming days, met with the head of the International Monetary Fund, Christine Lagarde, and the IMF’s envoy to Greece, Poul Thomsen, in Paris on Tuesday. IMF spokesman Gerry Rice told reporters in Washington that the three discussed “the way forward for Greece and issues of common interest” though sources indicated that the much-anticipated launch of debt relief talks in the fall was also on the agenda. Rice added that an IMF report on Greece is to be published “in the coming days.” ekathimerini.com , Thursday 5 June 2014 (21:24)