We had become almost used to the occasional pungent eggy smell outside the back of the house. While working on rebuilding the steps to the garden, Lin said “Clear some of the Canna lilies next to the wall. Cut back the Yucca. Let’s see what’s there.”
From a space around the roots of the cleared plants that was hardly half a cubic metre, I dug out, with spade, trowel and hands, a mess of black damp earth mixed with plastic bags, plastic cups and empty water bottles – debris that had drifted off through an 18 inch alley between our wall and the neighbour’s apothiki, escaping into our garden beneath a rusty iron mesh laced with chicken wire.

With bolt cutters I removed the skirting of this ineffectual barrier; found a tighter strip of mesh from our inventory of might-be-useful odds-and-ends, and between us fashioned a more effective barrier to block debris from the gully. The rubbish cleared, we found the source of the smell – a noxious black trickle that must have been escaping from our neighbour’s soak-away - foul water that had impregnated the rubbish I'd removed and bagged, making the smell from the leak even worse.
Do we mention this to our neighbours? Dilemma. The leakage is into our space and we have no wish to complicate a near perfect relationship. Better to sort it out and then perhaps mention 'a little problem' we've sorted.
“Yes. Let’s leave it for the moment. See if the leak can be sealed”
Using the hose at high pressure, Lin swashed out the concrete-floored space below the gully and swept it down the pipe we’d laid several years ago – in place of an open ditch - to take our washer water out of the garden.
She set to lining the cleared space with a concrete screen walled with pieces of marble. The difficulty was to find a moment in the day when no water was run from sink, loo, washer, or shower from next door. Mid-siesta seemed best. For three days Lin worked at it, abandoning the steps project. It was clear that the leak, if stopped in one place, would make another way through the porous bricks and mortar of our shared garden wall.
“You know what? They have concrete all round the other three sides of the soak-away but they've left the wall between the two gardens as the fourth side”
Lin left a small space at the foot of her lining to allow the leak to continue, as she blocked up other potential holes and cracks in the wall with cement, including ones above the water level “from which I suspect some of the miasma escapes”.
How to stop the final trickle? I bought some quick drying cement. During what seemed a hiatus in water usage Lin applied the mix to the lowest leak. The work had  dried in minutes. The result looked good; the space clean and smooth. Already the smells seemed to have lessened, as though the blocking operation was ensuring that the porous wall was filtering out the worst effects of the leak. Next morning Lin inspected.
“Oh no! It’s still leaking”
“We must get more quick drying cement. But Lin, it doesn’t smell nearly as bad now”
“That’s probably just luck”
She was disappointed. 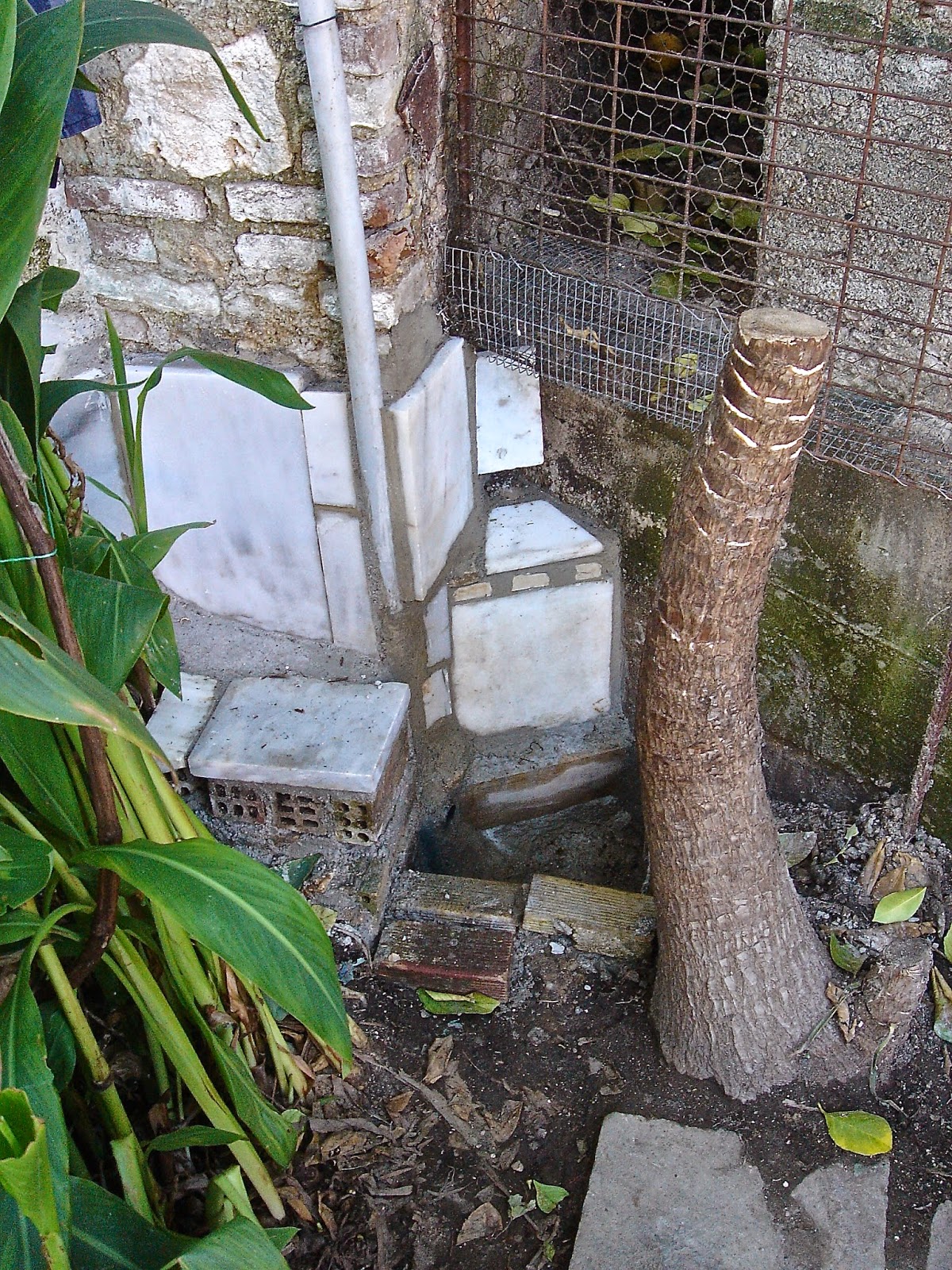