A sturdy blow from the south as the ferry rolls gently north, all but immune to weather.

The night before we arrived in Igoumenitsa on the small ferry from Corfu, we slept at a guest house. Earlier we’d walked from the Zygos Hotel opposite the main ferry terminal along a kilometre of excavated road as the project to develop the port advanced – dug since we were here on 2 January.
“Will this bring prosperity?”
“No” said Lin
We wandered at the new places that would front the landscaping. Plate windows, big lettered neon signs, prominent graphics, large stage-lit cafés with shiny chrome, glass tables and vinyl banquettes in garish colours – all the opposite of the muted intimacy I prefer. Numerous travel agencies dot the town’s uncompleted frontage; lit even more brightly; occasional people sitting at counters, in one or two places a customer.
“It’s Edward Hopper country. Without the danger.”
“Who uses these places?” wondered Lin
“Why all these travel agents? Especially now when you can buy tickets on line or by phone”
Sign upon sign – Minoan, Anek, Blue Star, Endeavor Lines, Agoudimos, Superfast, Grimaldi…

“They can’t all own each other. Wherever we travel they're always two-thirds empty or carrying trucks that would hardly need travel agents…or are they all laundering money like the tanning shops round Naples? Yet if you want a ferry between the Ionian Islands there are none. You always end up having to go via the mainland, unless it's a  day trip to Paxos from Corfu or to Levkas from Kephalonia. Island hopping without a yacht is impossible."
“Perhaps’ suggested Lin “people use the offices to set up larger scale freight contracts; plan distribution round the Adriatic, the Aegean, the Black Sea and beyond”
When we finally came upon some back streets we searched vainly for a tavern; one we’d enjoyed a few year back; lit by bulbs with lampshades; family-run with chicken and pork on a spit sizzling over embers; cosy interior with wooden seats and tables; no photos of dishes in several languages.
“It’s gone, hasn’t it?”
“For sure”
Heading back along the clawed up highway, which for once afforded generous space for people on foot – not something Igoumenitsa’s new port designers seem to have considered (see the maquette for the development on display in the ferry terminal) – we glimpsed a place I’d have chosen were it not now too late in the evening – Emily’s? Timos?, the one with the painting of a schooner, half-felled tree and chaffinch, both weeping - a reference to the great population exchange - ἡ ἀνταλλαγή - between Greece and Turkey in 1922. 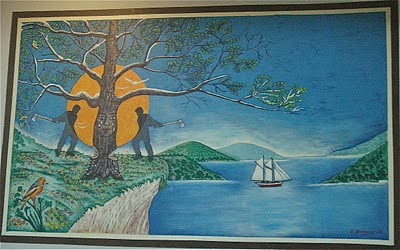 I’d had a snack there on my own early one morning in winter 2012 enjoying a friendly doggerel chat with the owner. He'd asked where I was from.
“Corfu”
“No but where are you from?”
“Ah yes. From England”
I was laughing inwardly at the reply – unspoken - that had sprung to mind at his question
“I’m not foreign. I’m English” <Δεν είμαι ξένη. Είμαι αγγλικά> That’s us in nutshell.

The air-seats on the Anek ferry Audacia were occupied by only a few foreigners on the floor in sleeping bags, equipped for going without a cabin – probably Balkan but not Greek. Ha!
“This is civilised”
I’d noted that all the tipping seats had arm-rests that could be raised allowing us to lie along them to sleep. On most ferries this is impossible.
“They don’t like people not buying cabins to be too comfortable" Camped here and not in the saloon amid tactically placed luggage, politely refusing waiter service – after one small cup of coffee at €3.

I snoozed for an hour after Audacia left Igoumenitsa and its friendly collarless dogs roaming at ease through barriers we need papers to pass, wagging their tails - on the road, inside the terminal, along the concrete quay watching the big boats come and go with their churning, rumbling echoing clangs. I read for a while. I got up and climbed the iron stairs to the Solarium deck – vast as a soccer pitch, marked for helicopter landing. In the early light we were entering the Corfu Channel, the closer shores speeding by either side.

I took a reverse photo of the familiar scene from our balcony when I watch the ferries gliding in and out of the straits - Ano Korakiana a small wavy strip of rubble against the darker sides of Trompetta, soon hidden by the narrows as the ship drives past the sullied slopes between Nissaki and Kassiopi where the Junta allowed the Lopakhins to hack roads and ledges for Corfu’s rich north western suburbia. Gripped by schadenfreude I contemplate horizon pools now subject to tax and even worse... 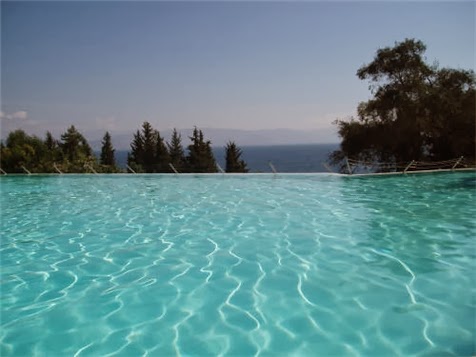 ...a tale of delightful woe told by a friend who works on them – a horizon pool jolted by an earth tremor – a slight subsidence making it no longer spirit-level horizontal, so it leaks at one end.
“Short stay visitors will hardly notice as they enjoy the pool, but if it’s yours the tiny decline from perfect is an ever-present irritant"
A blemish in the dreamed perfection of a photograph. An island in the sea should need no swimming pools. They steal water and often end up polluting the sea as they are emptied into it when cleaned.
“You put it right, make it horizontal again, but ever after you’re wondering if the same thing will happen again”
“Couldn’t we” suggested Lin “start a business marketing gimballed swimming pools?”

I was amid a 360° panorama. The tails of southern Albania, and northern Epirus and north east Corfu - shores close enough to make out buildings and outcrops of rock reaching into the sea. The chill tempted me indoors but for a wish to watch our curving route through the channel. Another ferry surged by southward.

The distant sides of the mountain behind Corfu Town held a dawn glimmer in a drear landscape that seemed to hang over the land weeping opaque columns of driving rain; the heights of Corfu dwarfed by the peaks to the east – bleak precipices veined with snow, peaks lost in the drenching overcast. Ugly and uninviting 'desolate and repudiating stone'; hemming the city of Saranda to starboard. Ismail’s Kadare’s depthless Albania of winter rain.

Now, well astern, I saw the ferry that had passed turning almost sideways to us to enter the narrows before disappearing between headlands. I had not realised how the Corfu channel closes behind a ship passing through, so that entering it uninformed, a sailor sees a deep inlet rather than the entrance to the Sea of Kerkyra.
In the saloon people were watching one of the many large screen TVs with extra attention as we were shown fractured roads and collapsed buildings - a second and larger earthquake below Kephalonia, but no dead or seriously hurt. A headline that won't sell papers came to mind.
"It'll be good in the end" said Lin "Lots of construction work. Jobs. People helping one another." 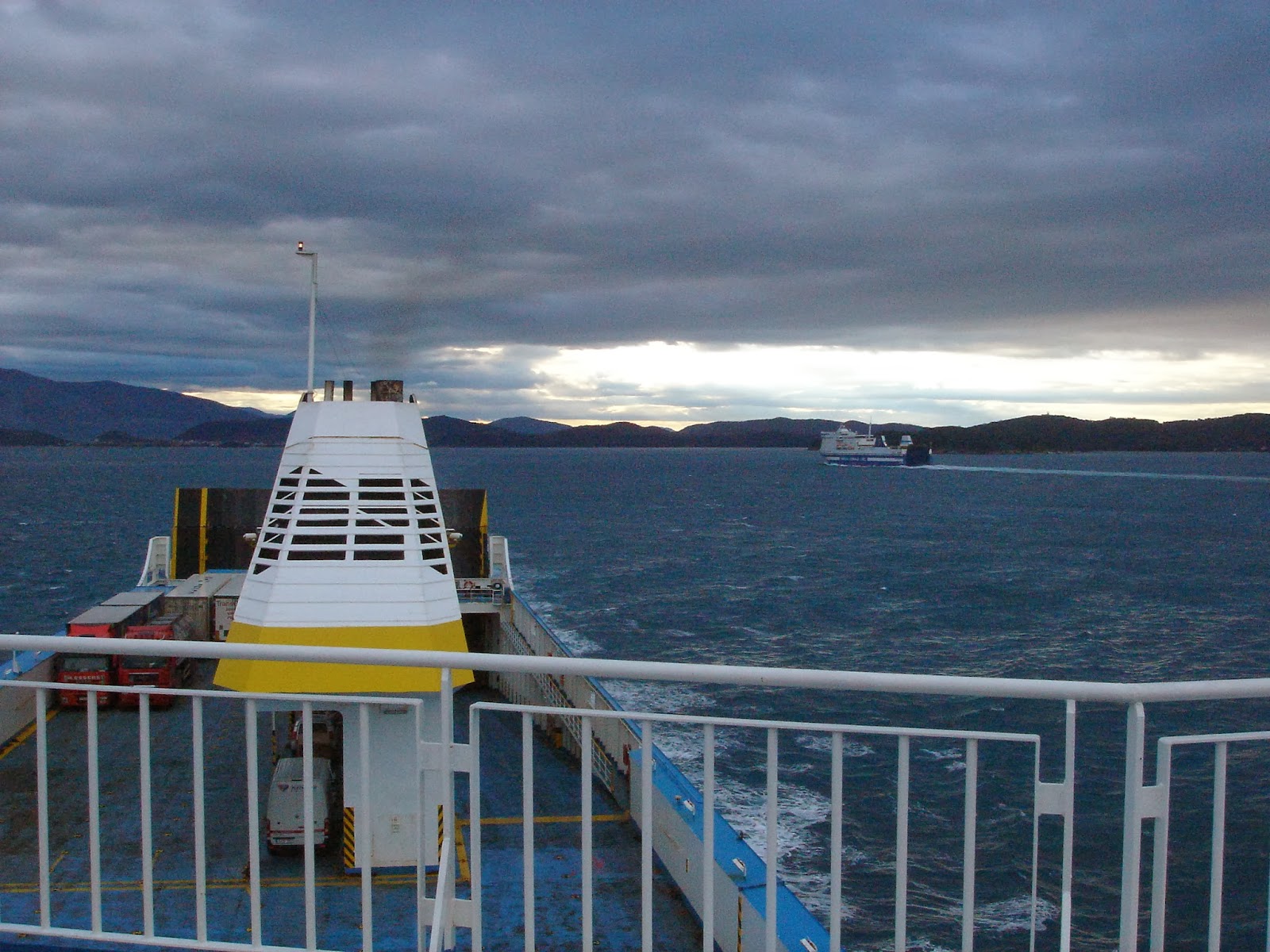 I’d said I’d wake Lin the next morning as we entered Venice. Our ship, instead of gliding, under tow, through the channel between Giudecca and the city, so we could gaze down on the hallowed architecture of Venice...


..delivered us instead to the Port of Marghera via a fogged avenue of sea markers between mudbanks and barren gravelly ground recovered from the lagoon... 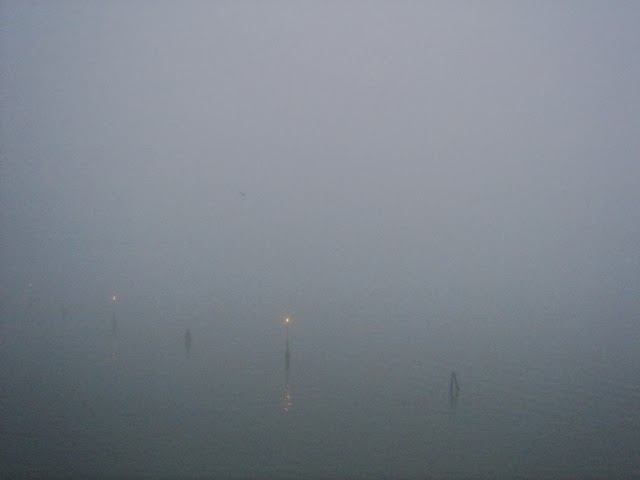 ...until we reversed into a container depot laced with service roads and long quays as efficient in transhipment of goods through Europe and beyond as Venice is in handling its freight of tourists like us.

"It's not at first romantic" I said "but it's a stunning place. Goodness knows what activities, what busy-ness, what ambition and depravity, tragedy and excitement is spread around this great stew of sealed boxes shipping to and from the rest of the world...and it's good that big ships are excluded from the Giudecca channel, if that's the case rather than Anek seeking a cheaper berth."
I hope the restriction is the result of protests against the damage big vessels have been doing to Venice. Our ferry - Audacia - is just of 25,000 tonnes. Some cruise liners visiting Venice exceed 100,000 tonnes. 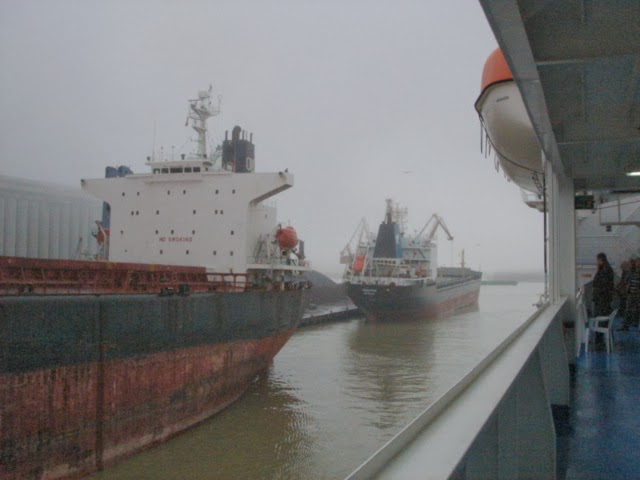 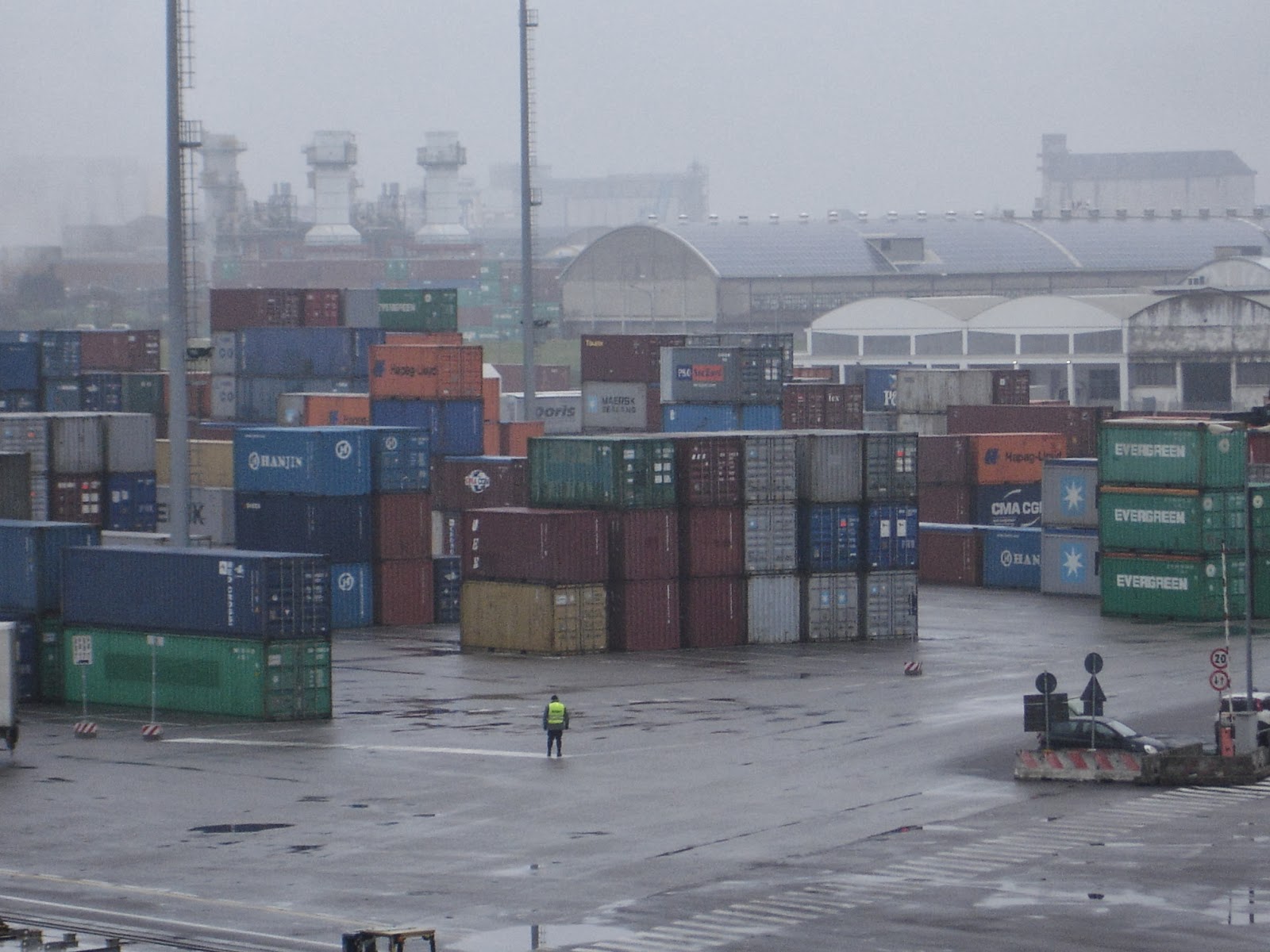 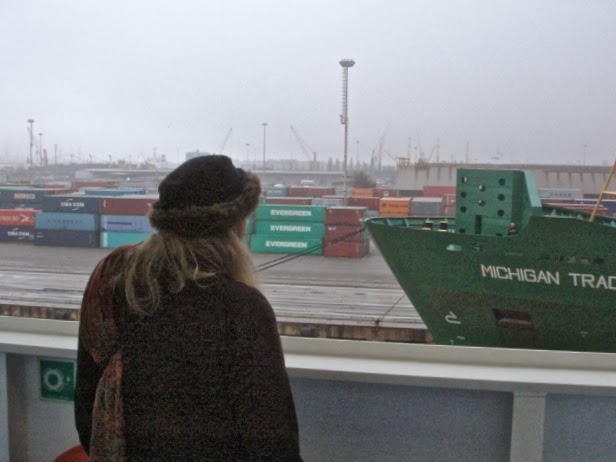 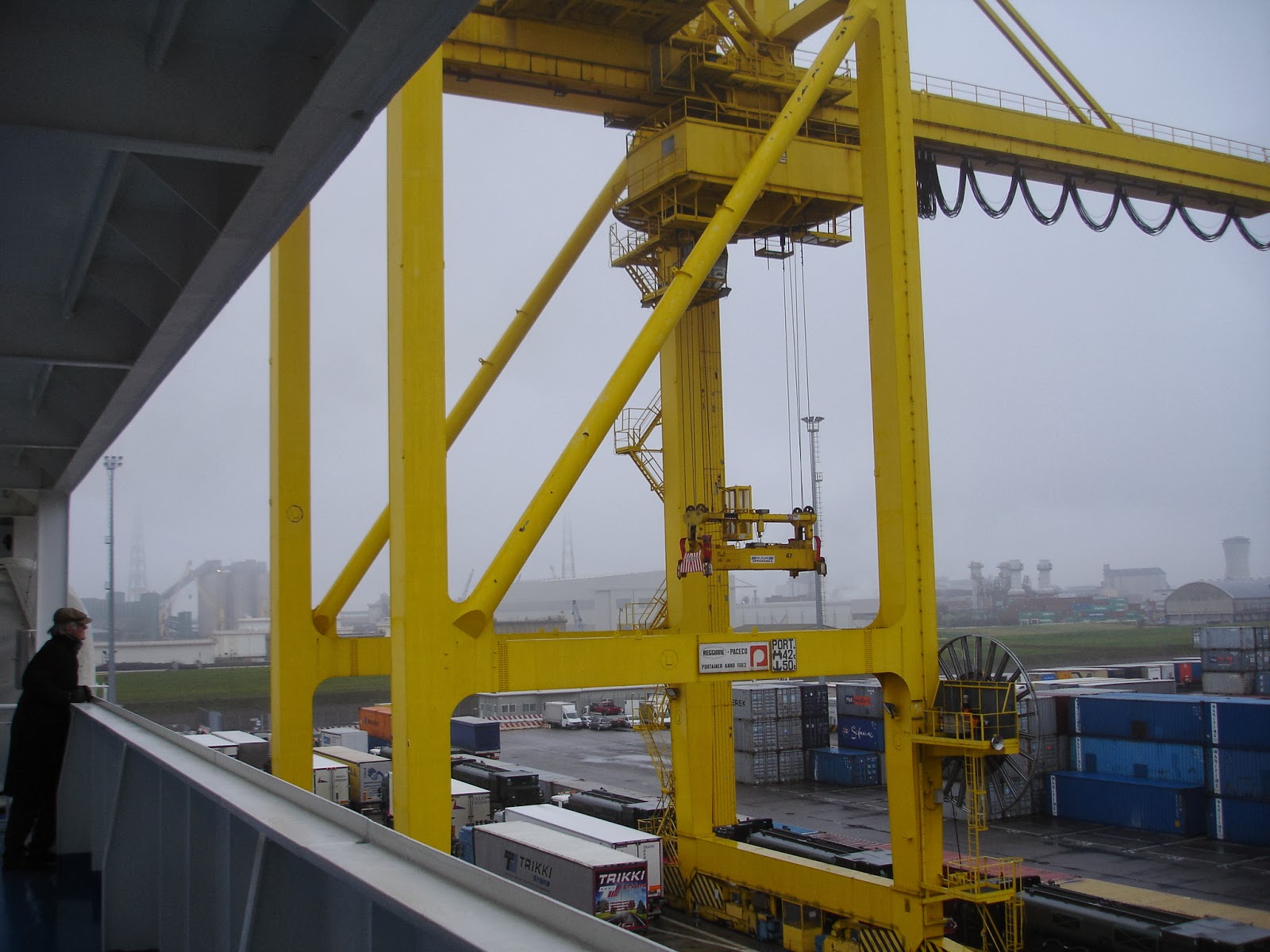 As the small cargo of trucks disembarked, there was a free minibus waiting to take us - just five passengers on foot - from our ferry to the many platformed railway station at Mestre, about a kilometre and a half away, from where, for under €2 from a ticket machine, we took the ten minute journey on one of the many trains into Venice St.Lucia.
"Hm" said Lin "I do think the ferry company should have given us free tickets into Venice"
*** *** ***
Using copies of hand written lists in Greek and English made by Angeliki I've typed out a first draft of a list of the works of Aristedes Metallinos in chronological order and e-mailed them as a nine page file to Irini S, Effie S and John P. 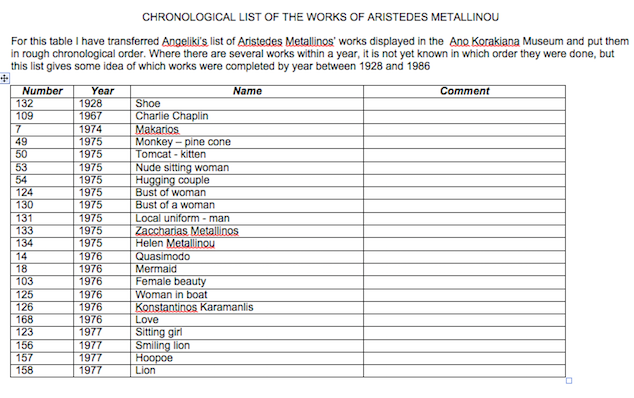