Sunday afternoon before last I was planting winter onions – against instructions on the pack – along with broad beans. A call from Crete.
“Your ferry from Venice has been cancelled. Can you get to Ancona by noon for an alternative”
“We will not be in Venice until 11.00”
“Talk to Viamare tomorrow. Goodbye”
I looked over my plot; more or less every inch dug over, with some of it covered with weed inhibiting black polythene sheet. Taj will continue with couch grass weeding and de-stoning while we’re away. From mid-February through March I shall strive planting proper. I’ll also raise neater stronger netting round Gill’s beehive.
Monday morning Dale at Viamare assures me of an alternative ferry from Ancona. He shares my frustration at the arbitrary way these Adriatic ferries are cancelled against schedule
“There were probably not enough passengers”
That’s how business works - inconvenience outsourced to actual customers rather than a tax burden on all to guarantee a reliable public service.
Midnight on the 30th Dec, Guy collects us and drives us to East Midlands Airport. There we doze, read and chat passing 5 hours before a dawn flight to Venice.
“We’ll take the train from Venice to Ancona. Stay in a B & B by the station. Catch another ferry Wednesday afternoon and in Corfu Thursday around 11.00am. Refund at the Anek check-in I’m assured”.
The plane descended not so far above the great line of black spiked mountains that stops us populating even more of the Veneto 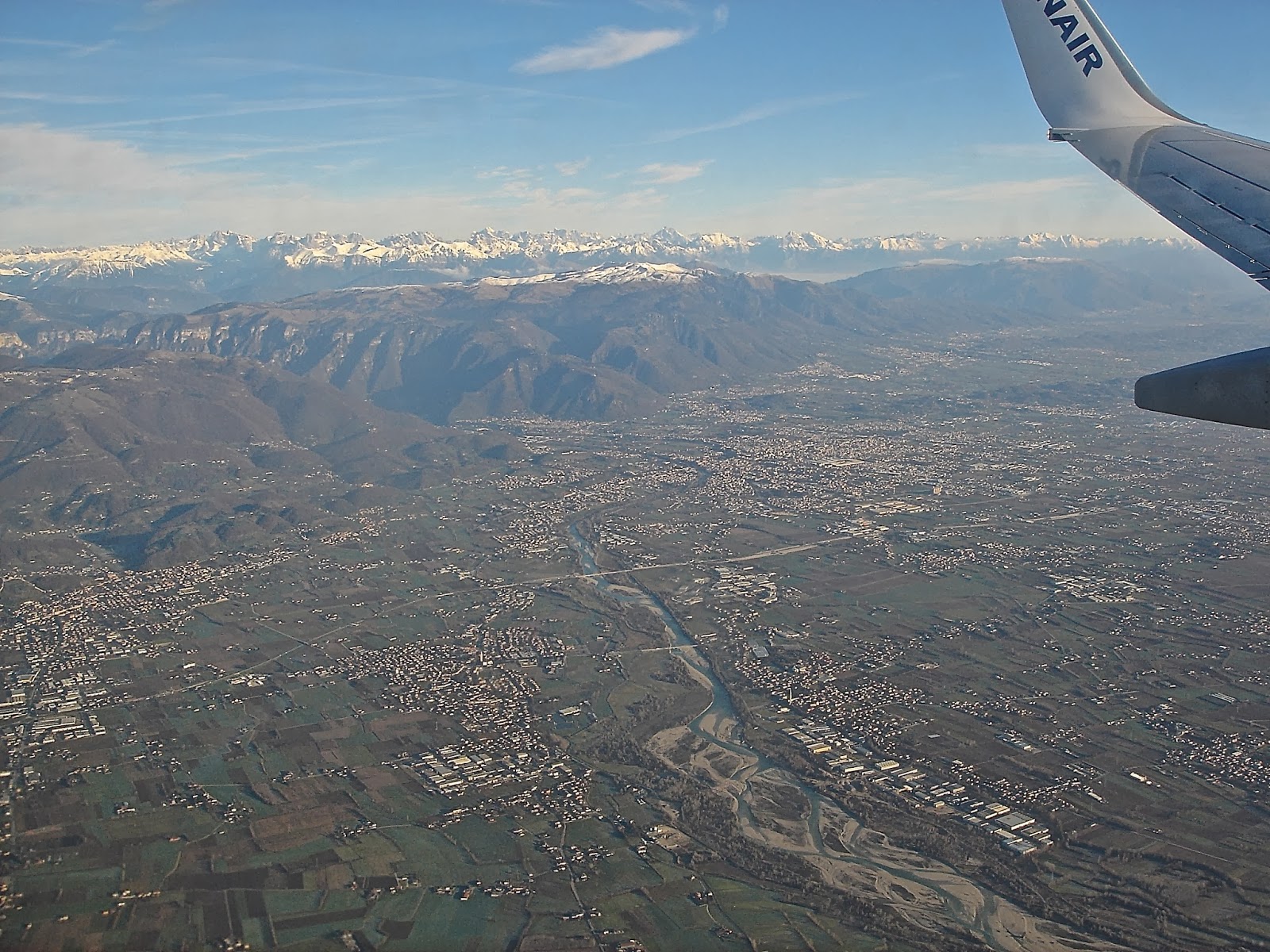 From Treviso a bus to Piazzale Roma; a walk over the Centenary Bridge and a jostle along Terra Lista Spagna, even more people than usual. New Year in Venice. Bought two crispy newbread rolls to enclose prosciutto on the journey south. The Rome train slid out, almost empty with Italians filling-up the carriage from Mestre and Padua. Changed at Bologna for Ancona. At the small hotel opposite the station we found our room and fell asleep. I woke for a few minutes at midnight to hear fireworks. In the morning, unhurried, we caught a bus to the ferry check-in and were handed our refund. Another bus to the ferry Hellenic Spirit. Hardly sat down when the intercom call us to reception. A worried man from the Anek office asks us to repay our refund.
“You must write to Anek. They will refund you a complementary ticket”
Lin “You are joking aren’t you? Write to Anek! Ha”
“But the man who paid you the refund. It will come out of his pocket”
“Do you know” said Lin “I really thought you might have called us to the desk to offer us a cabin to make up for the inconvenience you caused by cancelling our ferry from Venice two days before we set off”
“He thought you had a car”
“Ridiculous! The man at the desk asked if we had a car and we said ‘no’ and it was on our tickets too”
Shrugging of shoulders and exchange of email addresses.
“We’ll let you know” I said.
The ship drove south on a flat sea. It was mild on the perspex screened deck away from the piped Christmas music; instead a soothing hubbub of Greek truck drivers in gesticular debate. Dusk on the empty sea. A shared Greek salad and plate of chips in the self-service. Lin and I discussed what we needed to do in Greece.
“Finish a report on how HHH have used last year’s Community Chest grant”
“Prepare for this small claims case in the second week of Feb”
“Get a topological engineer to measure the floor space of our house on Corfu”
“Thank-you letters!”
“Get on with jobs at 208; the steps to the garden, the apothiki tiling, the handles on the wardrobe and chest of drawers, more firewood from the beach... then there's Summer Song and the new Greek boat tax, write a Wiki piece on a friend, continue learning about the village sculptor Aristedes Metallinos…”
On the ferry some travellers sleep on blow-up mattresses, one has a tent in a sheltered part of the after deck. We must have had a good four hours sleep on the carpet at the back of the air-seat room. At one point I rose to remove the plug from the widescreen TV displaying before a slumbering audience a succession of android women in minor lingerie with phone numbers. The flicker was annoying; a relief to see a blank soundless screen at last.
I woke as our ferry entered the straits between Corfu and Albania, and sneaked out for a croissante, orange juice and coffee - €9.20
“That’s ridiculously expensive” Lin came later and had my second gratis coffee.

At Igoumenitsa, the concrete apron, the affable collarless port dogs and the familiar kilometer walk over uneven concrete to one of the small ferries to Kerkyra...

...strewn along the horizon – a slow two hour chug of ever increasing delight under a clear sky. In the saloon two plastic cups of hot chocolate, Greek chatter and two inaudible fluttering TVs screening multiple talking heads between long commercials.

All in the house was fine. We’d been away hardly seven weeks. The fire was ready to light. There was a box of firewood that wouldn’t need refilling for a day. The landscape from the balcony turns briefly pink before sunset. 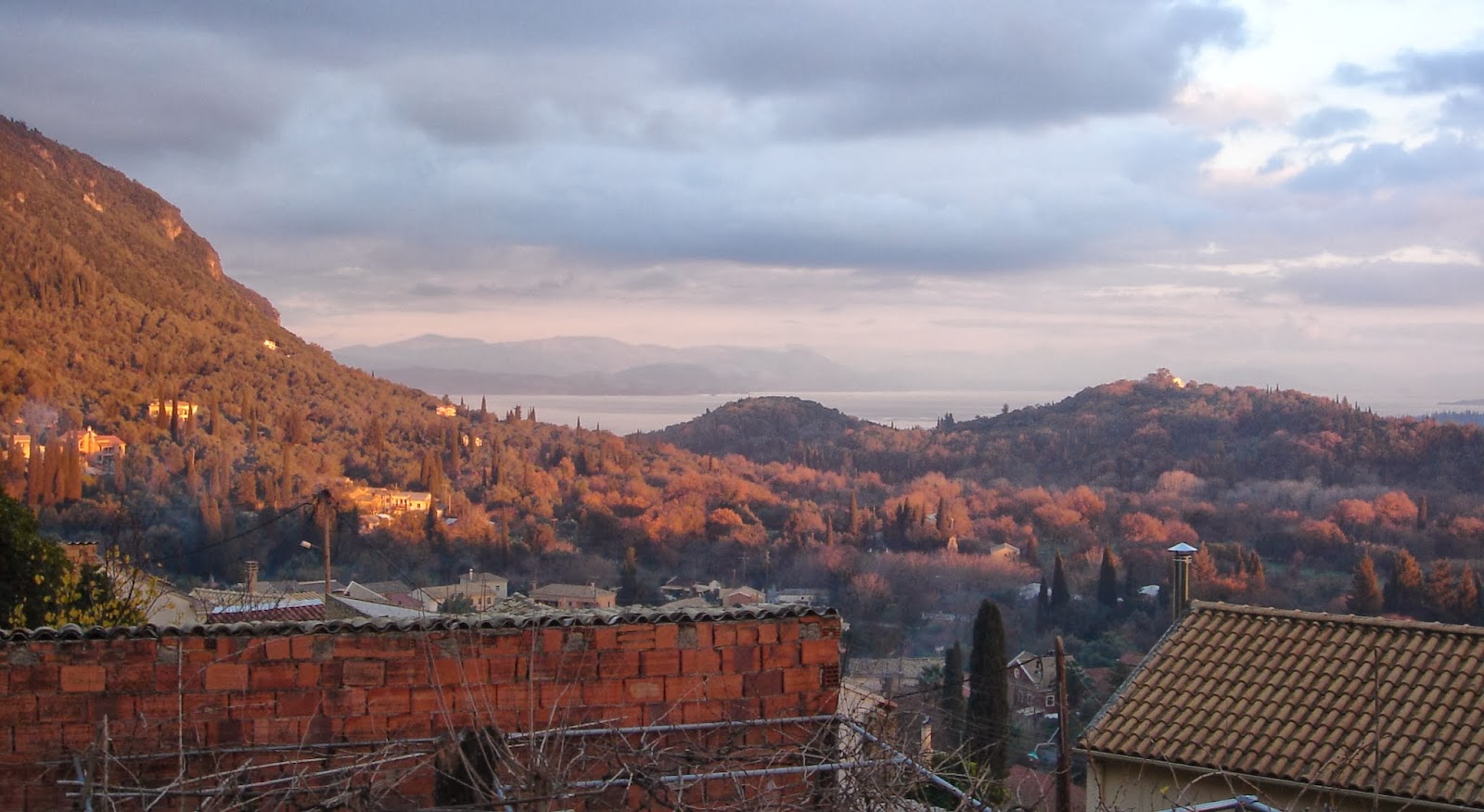 While the house warmed, we strolled by Christmas lights along Democracy Street, encountering neighbours... 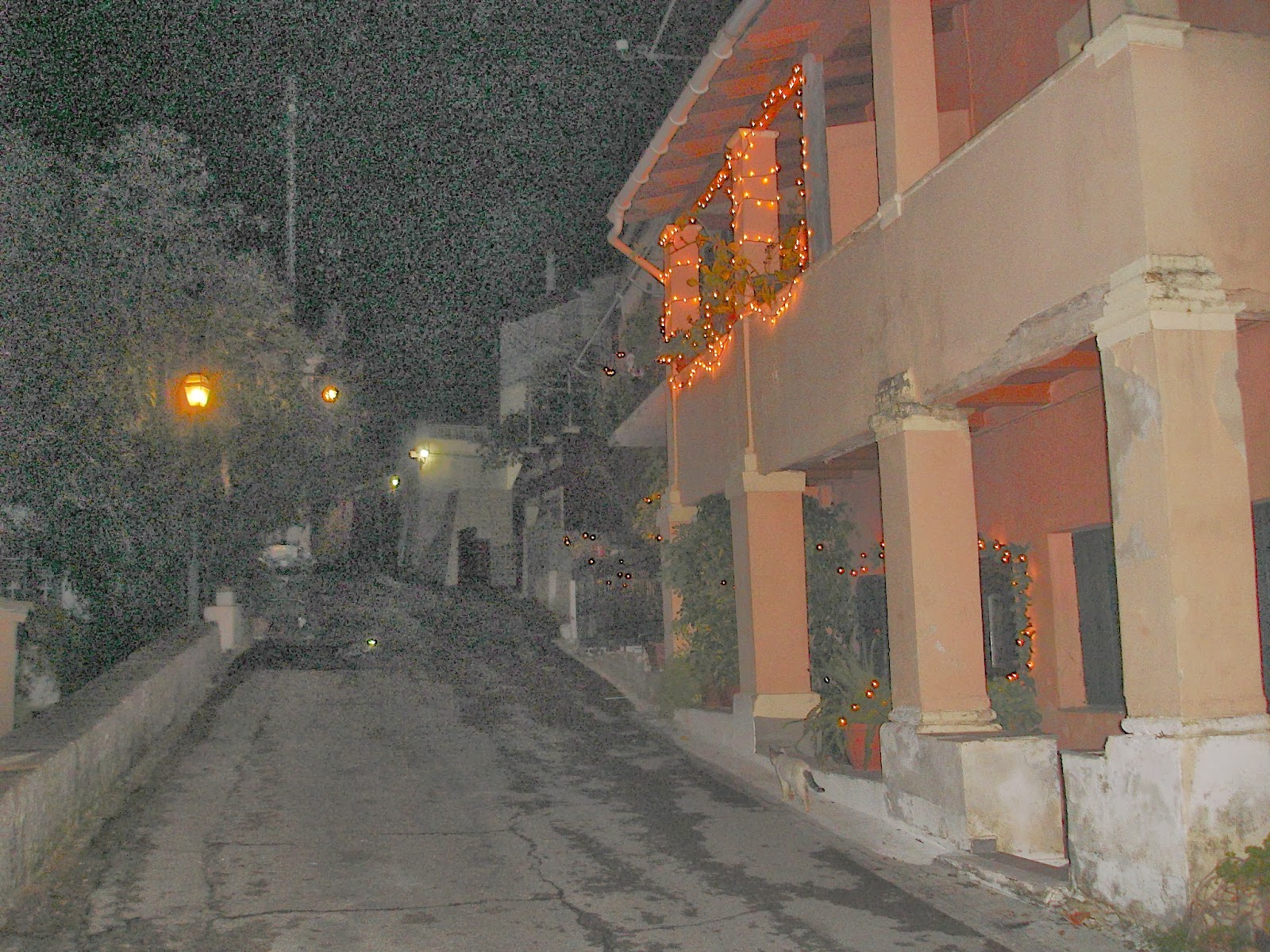 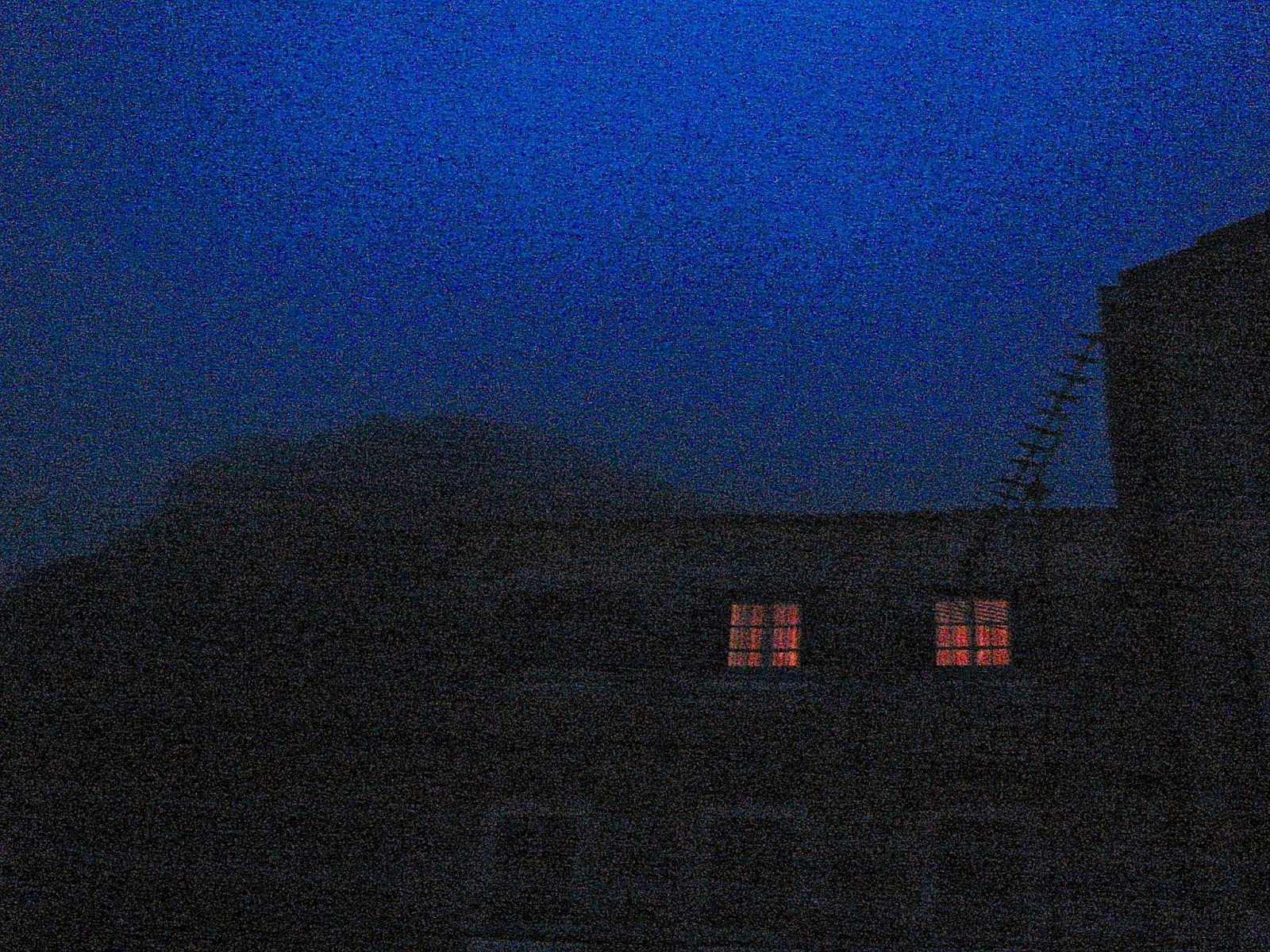 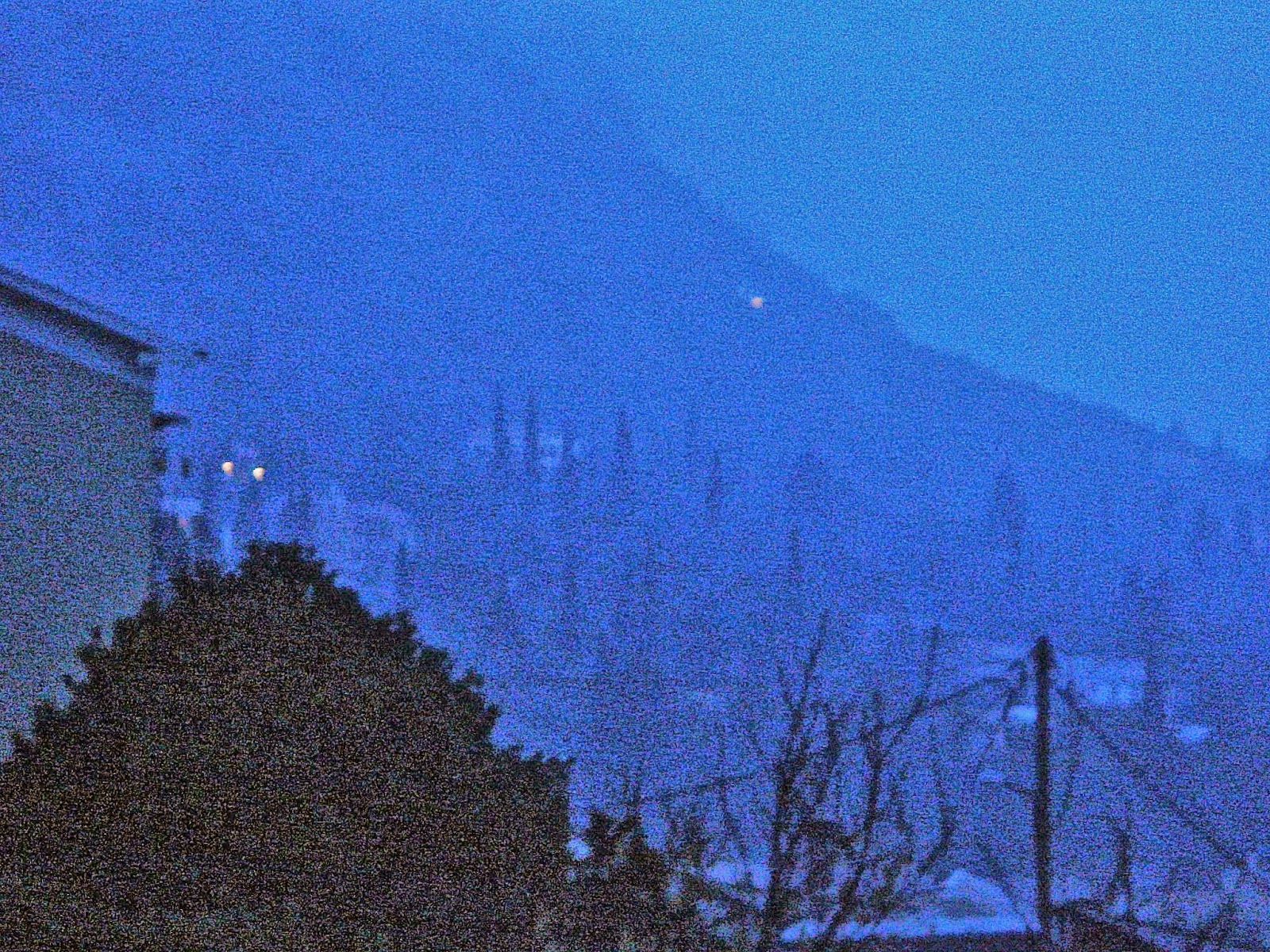 I’m in place that is familiar yet still pleasingly unfamiliar. Cosy. Secure. Quiet. Angeliki phones. We were to meet at the Epiphany Επιφανεια Service at St George’s on Monday.
Posted by sibadd