Richard Pine loves Greece, lives in Corfu, and is someone whose friendship is a source of pride. His conversation is sparse, amusing, educated and to the point. This article, one of his regular 'Letters from Greece' to The Irish Times, chills me, piercing through my reflexive optimism about the capacity of Greek democracy and the Greeks to weather this relentless unending crisis. Now the experience of relative tranquillity looks more and more like that eerie peacefulness to be found in the eye of a storm. Comments on his article criticise Richard for lack of balance, for not providing evidence (in a short essay he actually refers to much evidence for his despondency) - but neither do those who comment, failing to offer any robust rebuttal of reflections based on Richard's acute knowledge and direct experience of Greece and its history as well as the sequence of events by which Weimar Germany, one of the most civilised states in Europe, popularly elected the demise of its own democracy…because these things are unthinkable they are not thought about, and for those who do not remember they are unimaginable…


'Many Greeks would prefer stability to democracy'
Under the present regime, the country as a whole is unsustainable 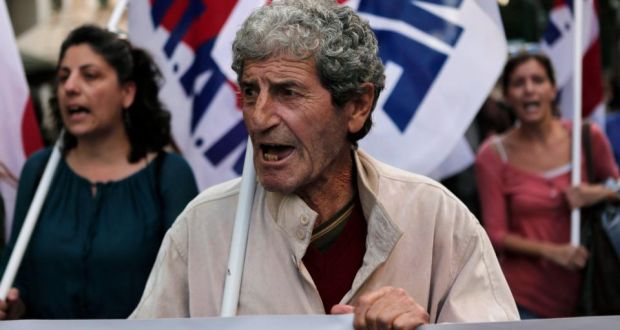 Protesters from the Communist-affiliated trade union PAME shout slogans during a rally yesterday against the government’s plans for cutbacks in medical staff and hospitals in Athens. Photo John Kolesidis/Reuters

I would not be surprised or even shocked to see tanks rolling into Athens to signal the advent of a military junta. Apprehensive, but not surprised. It will almost certainly not reach that point, but citizen apathy at the poverty of political life, and despair at the continuing economic decline, are setting the scene for a potential takeover by forces including the military, police and far- right political parties such as the fascist Golden Dawn (GD).
A coalition of such forces would offer not only stability – a one-party state or even a no-party state – but no-nonsense determination to deal with the conditions of a country which sees no way forward under present dispensations.
A judicial investigator, attempting to assess the culpability of Golden Dawn MPs in relation to a recent murder and membership of what is in effect an illegal organisation, has stated that the party’s aim is “the dissolution of the democratic system of government”. That system has been abused by successive governments to such an extent that its suspension would be welcome to many disillusioned Greeks.
Meanwhile, the call by the union of reserve military personnel, for abolition of the government, repudiation of the bailout programme, the expulsion of illegal immigrants and the establishment of a government of national unity, chimes chillingly with GD’s policies.
A coup in 1967 led to a military junta for seven years. Greece became a police state. One of its leaders declared categorically, “whoever is interested in human rights in Greece is a communist”. So much for democracy. Its anti-democratic behaviour included disappearances and torturings, as reported in gruesome detail by this newspaper’s Peter Murtagh in his book The Rape of Greece.
But that was several years before Greece joined the EU in 1981. If it happened today, the EU would most likely expel Greece, which would certainly exit the euro zone, a step which would upset few Greeks. The bailout was (as the IMF admits) a mistaken panic measure to save the euro rather than saving Greece. Today, the people among whom I live don’t give a damn about the euro, and they look enviously at the likely end to the Irish bailout.
Today, the passivity of citizens, already exhausted by successive waves of austerity and degradation led by Brussels and Berlin, would reduce the likelihood of any meaningful opposition to military rule. Many Greeks, quite apart from the fascists, would agree that the prospect of stability and a dependable vision of the life to come is more important than democracy, and better than the life they currently lead.
It would, nevertheless, be a police state. It is widely believed that the police have been infiltrated by GD (this is under investigation), thus creating a strong ideology and a threatening presence on the streets. A police state would be Europhobe, xenophobic, and brutally harsh on its opponents.
A government spokesman recently said, “We have used up all the fat in the economy” – referring to Greece’s inability to reduce public finances any further to meet troika demands. With the fat has gone the elasticity and resilience of the man in the street in both financial and intellectual terms.
It is unrealistic and unfair to compare Greek statistics with the EU norm, even with the similar Irish financial mess. Unemployment, the banking crisis, tax evasion and corruption are specifically Greek problems. Under the present regime (or lack of it) the country as a whole is unsustainable – politically, economically, socially, culturally and morally. A hardline government could be achieved by the expulsion of the existing middle-of-the-road cosy coalition of New Democracy and Pasok, the so-called socialists. The chief alternative is a coalition of the left (Syriza), the possibility of which has increased the rightist vote.
Public opinion has moved slightly away from GD. Parliament has voted to remove immunity from nine of its 18 members, and suspend state financial support for GD as a political party. But current opinion polls still place GD with 7% of the national vote, down from 12% at its highest. This would still leave it with three more seats in parliament than it already holds.
And it is not only politicians who are decrying the status of Greece. At a London conference in mid-October speakers referred to the risk Greece runs of becoming “a failed state” unless it addresses “ineffective governance and lack of public confidence”. It was argued that “targeted constitutional correction and an internationally-sponsored programme of economic reform” is the only way to save Greece and the euro zone. Whether an attempted, failed coup would give the government a sufficient wake-up call is unlikely. Greece is a tragedy waiting to happen.

Plato said "One of the penalties for refusing to participate in politics is that you end up being governed by your inferiors" - an elitist observation unless you subtract any implication of class and insert some gauge of the inclination to treat one's fellows with decency; as germane, the words of George Santayana, 'Those who cannot remember the past are condemned to repeat it'
…and see the article by Michael Theødosiadis at Eagainst.com 24/10/2013 The Fascist threat beyond Golden Dawn 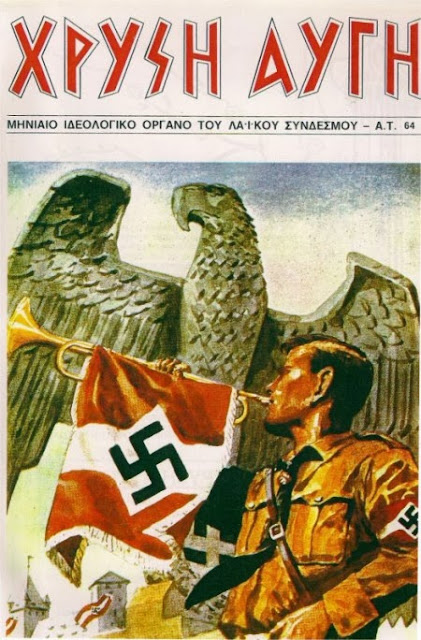 The Serpent's Greek Lair by Yanis Varoufakis - In this, the fourth article that vitalspace.org and I have contributed to the Witte Centre for Contemporary Art, I offer a short history of the Greek Nazi party...In this piece on Golden Dawn, I begin with an encounter with an old, poor Peloponnesean farmer, some time in the 1990s, whose life revealed much about Greece’s Dark Side...


...The question now is: Why has contemporary Greece seen a Nazi revival? Spaniards, the Irish, the Portuguese, the Italians have also felt the ill-effects of the Eurozone crisis in their bones. But why is it that only in Greece has a Nazi party, Golden Dawn, managed to enter parliament in large numbers, while its storm troopers are terrorizing the streets? Kapnias’ story offers useful clues. It throws light on the significance of the Nazis’ attempts to create a local SS-like body of marginalized men disaffected by the local bourgeoisie, by the Left, and living under a permanent cloud of collective disgrace brought on by a previous national humiliation.... 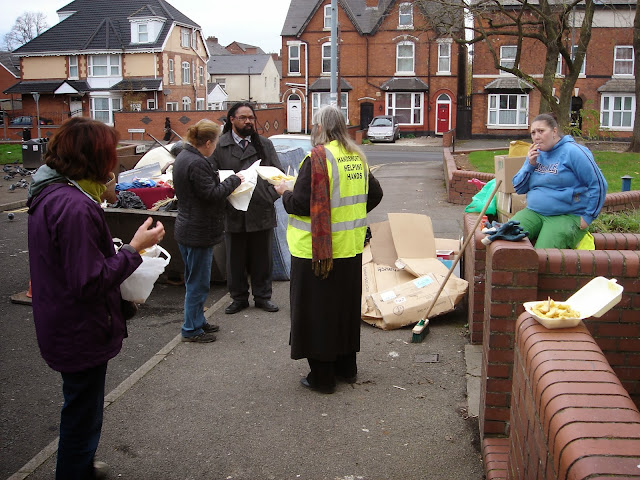 HHH volunteers enjoy a lunch break of local chips discussing progress with Ward Officer Ken Brown visiting to check progress on our skip-it don't tip it day. There are some typical rubbish collection challenges around Wilson Road. 1. A pile of detritus gathering further rubbish in the alley between New Inns Road and Wilson Road that council workers struggle to keep cleared, [Some say we should copy those countries that serve strict penalties on those who litter but it is almost impossible to collect evidence acceptable to the Crown Prosecution Service (CPS). You must catch people in the act. That requires street wardens, police, PCSOs. All in shorter and shorter supply as the government erodes commitment to the public domain in favour of privatisation. On the whole citizens are reluctant to take photos and report (less apathy than an aspect of UK culture I quite like) and the police, unhappy about the paperwork involved, will seldom charge someone with littering in what they already view as a rough part of town with more serious policing priorities. The people who contribute most to this are social casualties - in this case from a local hostel for recovering alcoholics. Would the courts be able to change their habits? It's most intractable. This is why we must labour the links between social cohesion and the environment. This kind of thing makes people dislike, have contempt for, and over time even develop hate for particular categories of vulnerable people who are their neighbours. This constantly renewed heap of rubbish erodes social altruism.]

I feel the animosity I refer to in myself.  I question it and wonder what my mirror says. That term of abuse - 'bleeding heart liberals' - coined in the US, is such a clever turn of phrase. Cruel but so effective in drying up civility towards neighbours and even making some feel guilty for caring for their fellows. I'm not saying this problem is not always with us, nor that more government would solve it. I think some challenges are Sisyphean*. A good citizen acknowledges that and goes on rolling the stone up the hill. 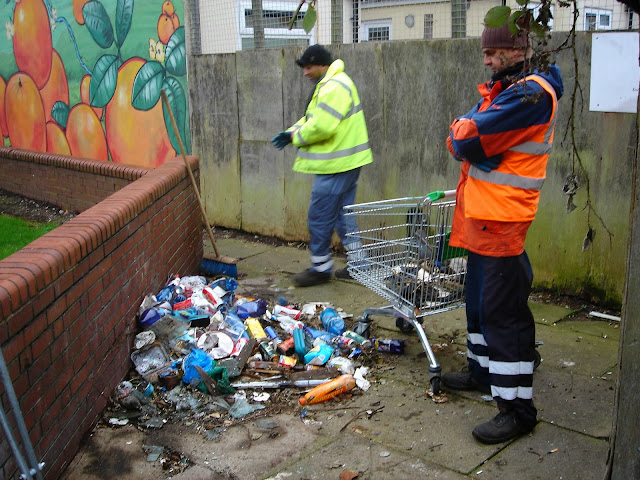 2. A broken notice warning of £20K fines for fly-tipping, 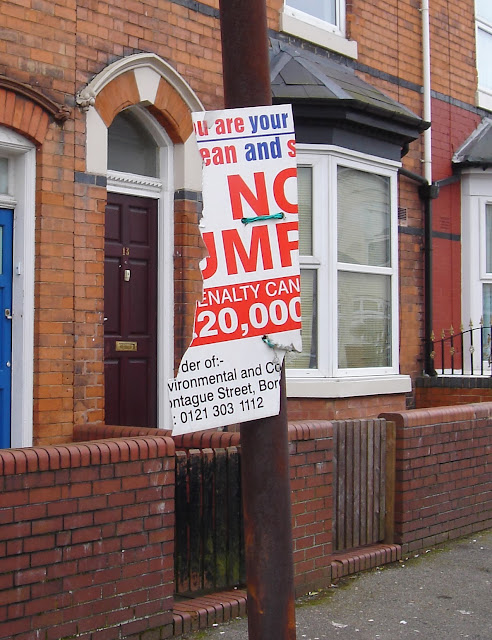 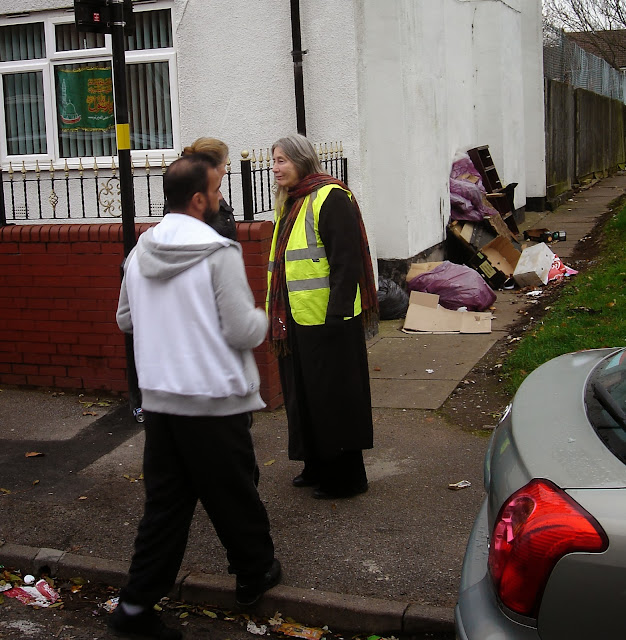 4. A fridge, which should have been disposed of separately, dumped in one of the skips while HHH volunteers were clearing rubbish further up the street, 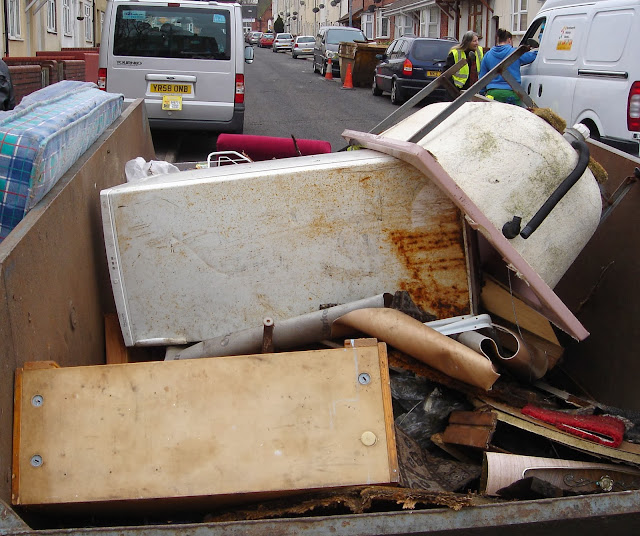 5. An HHH volunteer chats with a neighbour feeding pigeons showing them a Birchfield Action Group circular asking people not to do this 'because food on the ground causes more rats'. 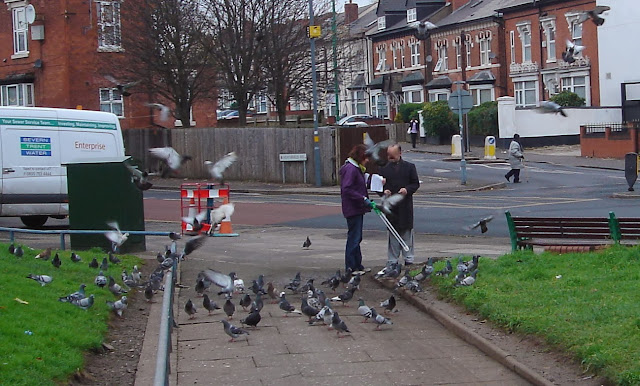 All these issues demonstrate the connection between our environment and local social cohesion. 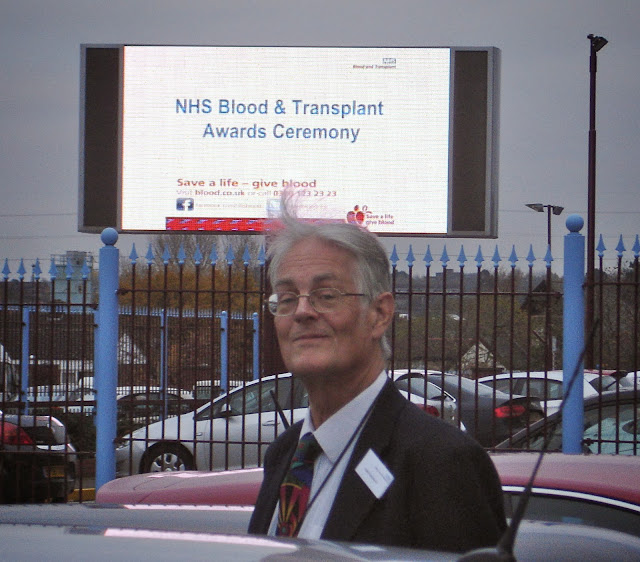 It was enjoyable and I felt proud being officially thanked and having my photo taken and getting an entirely impractical glass trophy.
"You'll fall on that" said Lin "and need a blood donation"
Before lunch we were offered a tour of the Aston Villa stadium, getting a stroll, with spine-tingling sound effects, of coming out of the tunnel to the pitch… 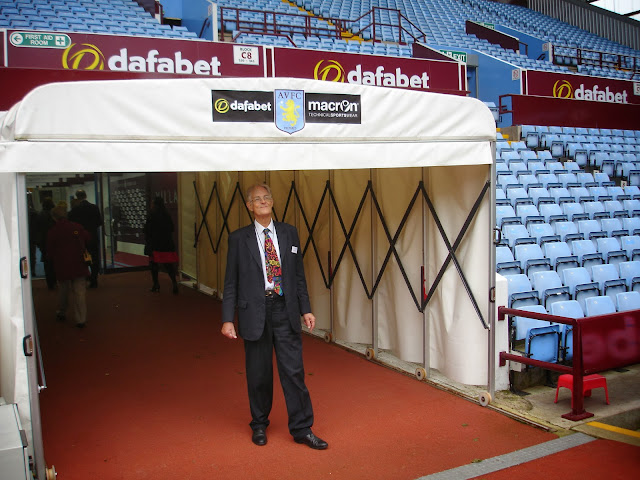 After the meal all 175 of us listened as Nadine Simpson, who was to present us with our trophies, spoke, entirely without self-pity, of the pain caused by sickle cell anaemia for which she had been receiving transfusions most of her life. She thanked us all. We applauded and were called up for photos. I found myself next to Adrian who'd remembered me from our 75th donation presentation event at the Hyatt Hotel.

*Sisyphus Σίσυφος was a king in Corinth punished for chronic deceitfulness by being compelled to roll an immense boulder up a hill, only to watch it roll back down, and to repeat this action forever.