London for the day

London was all grey overcast and drizzle. Big planes emerged, flaps down, turbines whistling, slowly processing at five minute intervals over central London down to Heathrow.
I caught the fast morning train to London, pensioner's concession - hardly £32 return - with plenty of room in August; a frisson of sadness for departed mum when I see the intercity waiting to start for Glasgow Central on the New Street platform where I wait for my train south. I didn't feel her in the Highlands as we cleared Brin Croft but here, where I could recall the pleasant anticipation of one of my long journey's north, I did, and always will no doubt. 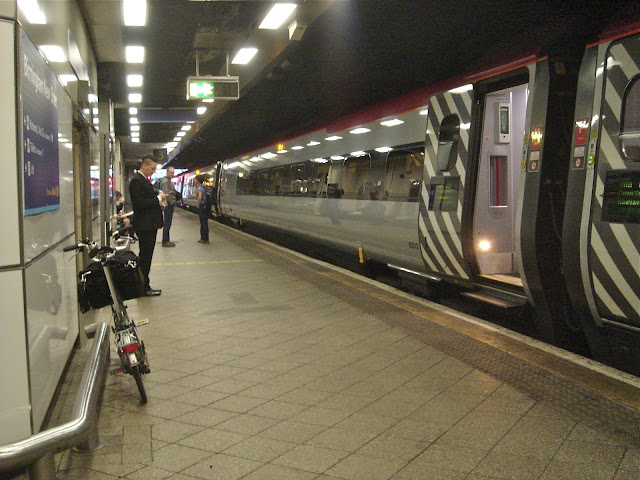 I cycled the familiar route - Gordon Street opposite Euston, past hedged Torrington Square and on to Trafalgar Square threading the congestion, down Whitehall past the Houses of Parliament onto the Embankment...

...straight on along the new blue cycle route to where it crosses the river at Chelsea Bridge and on half a mile to frail Albert Bridge, then across the brown river to take a right on to Parkgate Street. Just before it meets Battersea Bridge Road is Phoenix Cycles where I leave my Brompton with Mike, and his son Tom, for servicing. Meantime at a greasy spoon, run by Vietnamese, I take Full English beside tattooed workers in hi-vis tabards; one more - an African - arrives smoking a cheroot... 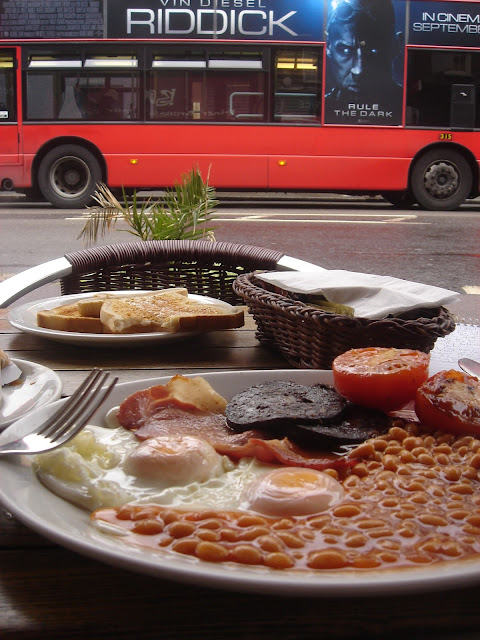 ...the scent of musty paper and rich earth burning clashes with the buttered toast bacon black pudding sausage beans aroma of my classic ethnic meal
"You're spoiling my breakfast" I mumble as traffic rumbles by our outdoor tables. I'm ignored for a minute to save face and then the cheroot is stubbed. Later I count the cost of repairing my bicycle; a whole new back wheel unit as I've no time for rebuilding a wheel whose hub has worn paper thin with use. That also means a new chain and hub gears; new saddle; new brake blocks, and general tightening up and the best new tyres I can afford. I've removed the dynamo and lights front and rear, in favour of LEDs, now so efficient and cheap. Mike's bill is over £300 but the bicycle I bought from him in 2004, for £699, feels like new (perhaps better as I know it so well), as I ride it happily back across the Thames via the carriage road through Battersea Park. over Chelsea Bridge and along the river again until I turn left towards Victoria... 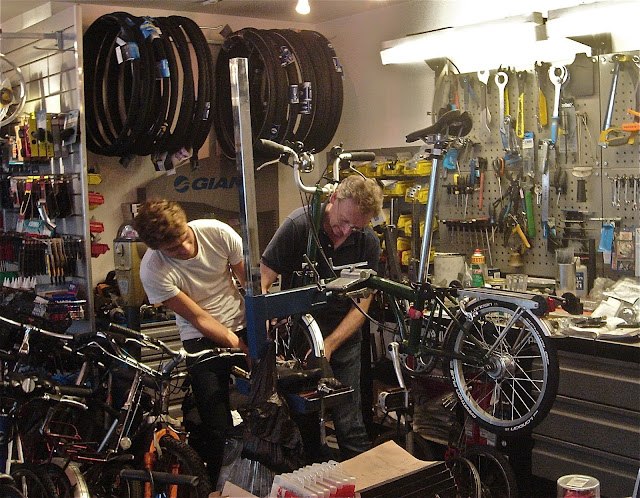 ...where I'm to meet my friend Charles Webster from Delta Leisure at Seafresh on Wilton Road for fish and chips and tea and beer, to discuss what I'm doing with Jack's film-tape archive...
Then back up Whitehall, up Charing Cross Road to Euston and another fast train home, enjoying my latest procedural - the intelligent work of Grijpstra and de Gier in The Blond Baboon by Janwillem van de Wetering; back home in time to take the minutes of a meeting of Handsworth Helping Hands, including a querying of our guest - my friend Andrew Simons, now its Community Engagement Officer - about an ambitious local investment, in which HHH might be involved. In common with similar central government initiatives across the country, it's called in our area, Birchfield Big Local, and those most directly involved, in particular Raj Rattu, a lapsed member of HHH, have recently been in receipt of £20,000 to spend on planning how to spend  a promised £1000000.
From our FB pages:
**** ****
Jan Didrichsen has sent me one of his valued emails:


Hi Simon
Back from South of France, trying to get my brain back into gear (with some difficulty) having gorged on Nordic Noir thrillers for the best part of 3 weeks, a bit of an addict I am afraid, must be a dark Nordic undercurrent in my psychology. All those formative years enduring long dark winters in sub-zero temperatures have probably left an imprint (well that’s my excuse!) Have been following your blog. Some worrying political developments in Greece esp around Golden Dawn. EDL are clearly trying to create something similar here but our circumstances (at the moment) are more resilient than those in Greece. Would you agree with that? But there is no reason to be complacent. The whole issue of immigration and everything tied into it has gone to the top of the political agenda. There is a danger of a 'race to the bottom'. There seems to be a competition between parties as to who can be the toughest without any clear idea of what that actually means in practice other than deliberately or otherwise stoking irrational and potentially poisonous responses and circumstances. A rational and well informed debate on this issue would actually be positive but I fear we are beyond the point where this is possible. Too many 'Sacred Cows' across the whole political spectrum will have to be culled for this to happen.
Reflecting in the sunshine on a Mediterranean beach I was beginning to question my own commitment to evidence based policy formulation and a rational approach to politics. Regrettably but not surprisingly, emotions, prejudice, perceptions fuelled by anxiety and anger, are the major driving forces in political development and processes; all of which creates, and is sustained, by strong ideologies. We know that facts are manipulated to serve ideological ends; so called 'independent' think tanks are fronts to promote certain  ideologies, financially  supported by vested interests. I am struggling to weave any meaningful Localism into this scenario. I note with interest that you are reading Michael Burleigh's book on the Third Reich. His linkage of politics in the Third Reich to religious crusades is an interesting one with a wider application than just the Third Reich. It’s a very attractive proposition for certain politicians. You may find his more recent book 'Moral Combat' (an oxymoron?) interesting in parts. You are no doubt familiar with Goldhagen’s controversial book. Whether you agree with all his analysis or not it is depressing to note how easy it was to recruit ordinary people including public servants to carry out mass murder on an unprecedented scale; no coercion or threats were necessary. That’s the power of ideology based on prejudice, misinformation, anger, fear, hate and associated irrationalities. It does not need threats or force to be successful or the threats can just be  implied and hidden. 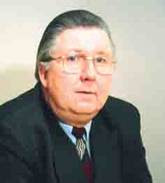 The story of Police Battalion 101 is a warning from history. Can’t work out what all this means for localism or local democracy but it feels relevant somehow.
It would be good to meet up sometime this autumn. I have treated myself to another monstrous 4X4 vehicle so you may not want to be seen in public with me!
Best
Jan

*** *** ***
I have been continuing to struggle with the small piece of land I rent next to Handsworth Park - Plot 14 on the Victoria Jubilee Allotments. My plot is hard on me, repaying my neglect; my inadequacy as a steward; my lack of prescience about just how much work it would require:

...An allotment is a test of character. This is what wasps and slugs have done to some of my produce. It makes me more determined to succeed but I do understand why so many people have been abandoning their middle class dreams of growing their own vegetables. I see now why peasants and poor farmers, if not forced of their land by exploiting landlords, also wanted to migrate to the cities and buy their food with their wages rather than with the sweat of their brows. 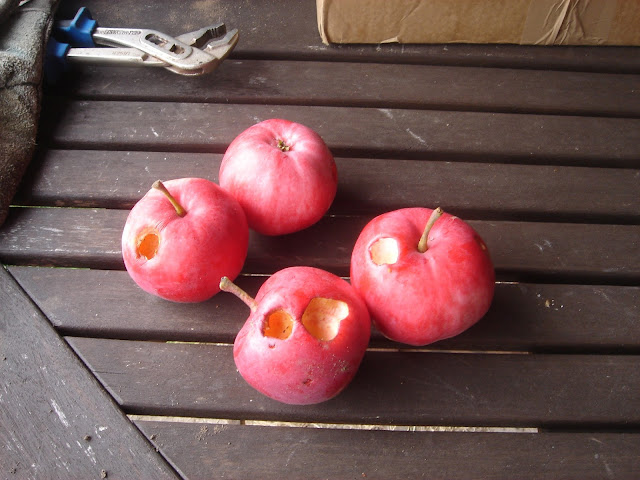 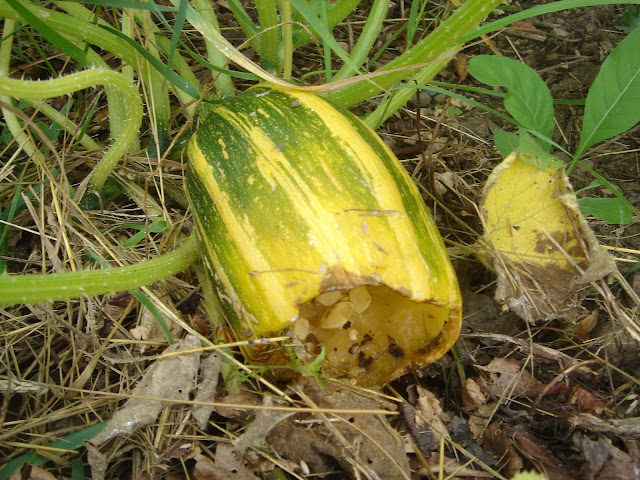