Summer Song's ready to go back in the sea

A succession of clear skies and proliferating greenery and, with the heat, the steady increase of public voices up and down Democracy Street, among our neighbours and people walking by, sometimes stopping for conversation by the green railing at the top of our shared steps now, as everywhere over this late Easter across Greece, outlined with dazzling whitewash, asvesti, ασβεστή.

Dave has booked the crane to put Summersong back in the water for Saturday - tomorrow. He'd texted me ‘today finally finished the outside paintwork ….’ 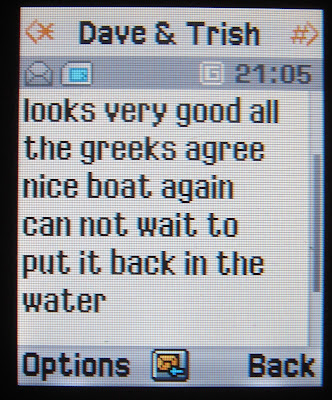 How I relish this sub-plot. It also makes me nervous. Dave got back from delivering a yacht to Trieste last week “a four day job that took a week. We had three separate forecasts from reliable sources predicting light headwinds all the way. We got into the straits opposite Saranda and it blew up force 6, gusting higher, and then steady headwinds for the next 600 miles. The Jeanneau has a broad hull for charter accommodation. Up she went. Down she went, crash, bang, crash, bang, No let up. And the porpoises. They’d come up alongside and look at you. You’d look back. Think they’d gone away and look in another direction. Whoosh it’s standing on its tail saying ‘boo’ and peering in your face eye to eye”

Lin and I pursue a procession of jobs in and out of the house, Effi and Adoni next door continue to adorn their garden with more plants brought with them from Thrace before Easter. I’ve drilled holes in the base of make-shift flowerpots for her. Effi paints paint tins deep blue and concrete breezeblocks red before filling them with soil to make them into planters. Lin’s painting doors. 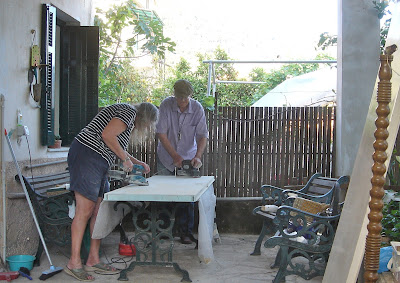 I’ve helped sand them. I’ve shaved the edges of our wooden front door to make it open and close more freely, tidied the electric cables leading to the municipal light bolted into the side of our house, cleaned the windows of winter grime, transferred a heap of sorted thigh tiles from under our veranda to the apothiki, mended a puncture in the rear wheel of my Brompton... 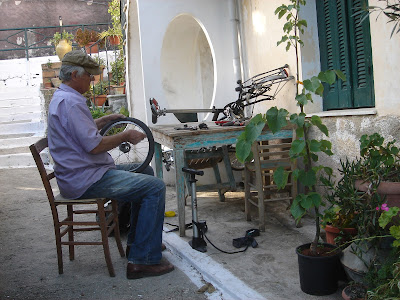 ...rebuilt the wooden carrier on the back of my larger bicycle, tidied out the porch locker and inserted a cut down palette to keep above damp the odd sacks of cement, plaster and the dusty dye that mixes with asvesti to give it a colour, and prepared, with sanding and paint scraper, one side of the house above the side balcony for painting, warning Vasiliki there might be some dust. Her carpets and rugs were coming in anyway, well sun-dried.
I'm not a good handyman. As Lin, who is, says “You break things”, I’m unco-ordinated, slightly clumsy. My mother, ages ago, said my dad was “all fingers and thumbs” when it came to practical tasks involving building, joinery, electrics or plumbing. My stepfather was quite the opposite, able to drive a desk as well as a workbench, creative in advertising, broadcasting and during the war stripping down the gear box of a tank (I saw his diagrams in an old file) and, later when the war office discovered them, exercising his talents as a communicator, creating propaganda. I didn’t learn to be tidy until I sailed a small boat and was made forcefully aware, by waves, of the consequences of not being ‘shipshape’. 'Spick and span' is not my inclination – in clothes, hair, shoes or any other walk of life – like gardening. It can be done but I have to work at it, hence my struggle with digging and sowing, the essential precursors of growing anything in soil. How I admire and respect people with craft, who have artistry in their hands whether laying tiles, fiddling with circuitry, inserting stitches, turning a pot, tying a fly, making a dove-tail joint and all the myriad brilliances humans do with their hands. What I do succeed in - jobs others would hardly reckon on giving a second thought - gives me pride, though it takes ages, involves endless fiddling, and an inventory of tools that might or might not be needed. The other day I made a typical mistake. Having treated myself to a SDS drill to deal with drilling in stone and brick, I added a conventional chuck in my order so’s I could use my existing wood drills. I wanted to drill through the house wall to attach an outside electric socket. The only masonry drill long enough was a conventional one. I inserted it in the chuck adapted for the SDS; set the drill on hammer – and of course stripped the thread of the adaptor chuck. Later I spent a good few euros buying a sufficient length SDS drill. A craftsman would have known not to make such an expensive mistake. I tell myself I must have some practical abilities. I can change punctures on bicycles. I taught myself simple astral navigation long ago so’s I could use a sextant to find where we were in the Atlantic. I’ve taken down a small mast in the middle of the Bay of Biscay and replaced its broken halliard pulley. I’ve added a veranda to my allotment shed. I can change the inner tube on the back wheel of a Brompton – in the rain.
And rain, with thunder, was what we got in abundance for one day earlier in the week, even as the village lost its water supply for twelve hours and I borrowed water for washing and flushing.... 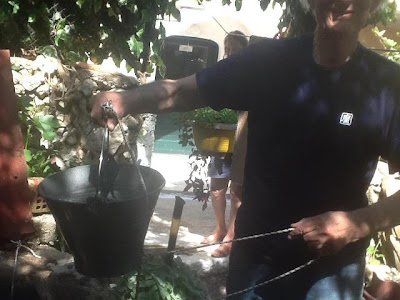 ... from Effi's and Adoni's well just across the path between us. 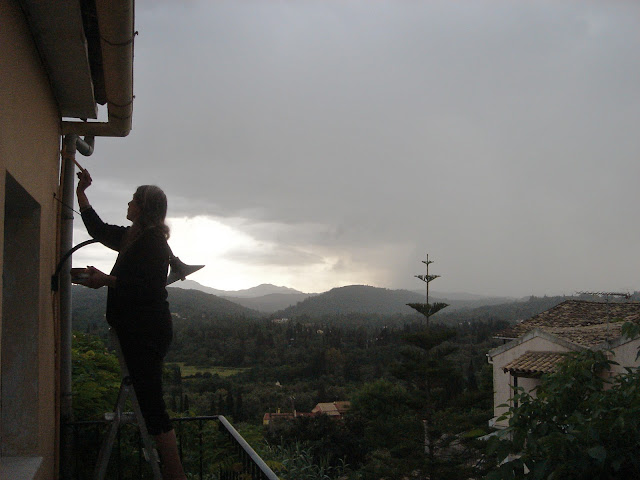 After what seems like over a year of surface preparation Linda has started painting the outside of the house. I've been filling in small spaces she can't reach, handing up paint pots, and holding the stepladder steady for her. 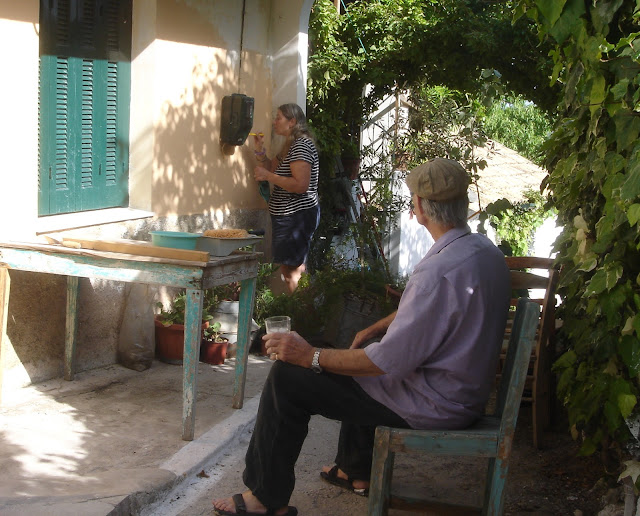 *** *** ***
Around noon on Easter Sunday, Vasiliki brought around a plate of lamb meat, including delectable kokoretsi κοκορέτσι. Our other neighbours brought us more from their spit (squeaking away through the morning) plus two glasses of raki.
We were also given red dyed hard boiled eggs - the ones you have to try and crack by knocking them together with another, like conkers (sort of). In return Lin and I wrote Easter cards and she made chocolate eggs specially decorated and wrapped for our neighbours' children.
For our Easter Sunday supper we were invited to Paul and Cinty's house where, with his parents, Phil and Sheila, and his brother Mark and Sally we enjoyed a balmy evening, buzzed by swallows as dusk settled on us. No lamb on a spit but, instead, a succulent successon of meats off the barbecue - lamb chops, sausages, souvlaki, liver, pork belly draft, a delicately carved wood pigeon...salads and, later, all the strawberries and cream we could eat... 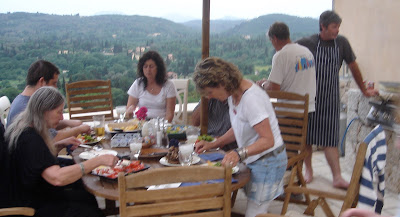 ...and and I enjoyed my home made Margarita from a salt-rimed glass. 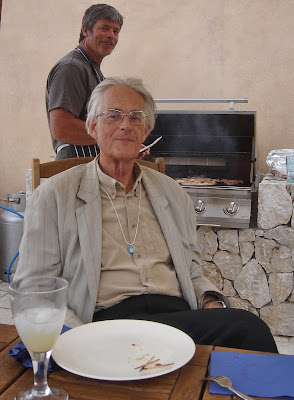 I'll especially recall a reflective chat about Golden Dawn, Χρυσή Αυγή; the worry that there's a generation in Greece who've not only forgotten the nature of authoritarian rule, but actually think it might be what's needed now. "It means" said C, reflecting her own experience of dictatorial rule even three years after the fall of the Junta, "that the police are in charge and the preferences and prejudices of a particular police officer will determine your case." I recalled that G.K. Chesterton, initially sympathetic to Fascism, in Italy and Spain, as a solution to democratic failure, issued a pre-war warning about Nazism in German; if it happened in England "imagine" he wrote "if in each street the man in charge of the rest of us, with legal authority to boss the rest of us about, is the school bully." 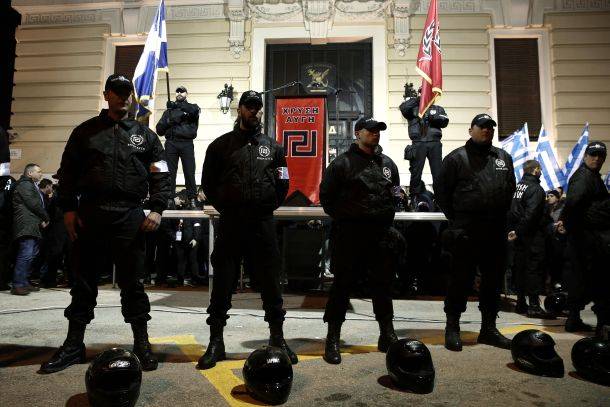