I was wandering down a long low neon lit shed where I’d been told she was working. A slaughter house. I came round a post – on the edge of a series of stalls - and there she stood with a cleaver in her right hand hanging beside her, looking workmanlike in the low light. Forty years gone by; I was meeting her again, dressed in abattoir gear way down a long low shed. In the gloom I came upon her standing astride in her working gear; gumboots, bloody apron. I went up to her - wan but kind smiles - feeling very glad to see her. She smiled at me. But all over her face…didn’t want me to embrace her (not because of being rejecting) but because...
“I’ve got this skin thing”
Lots of little bubbles (like Job’s boils) but not, to me, at all disfiguring, just a texture. I was very happy to see her - not love but a companionably strong feeling of reconciliation. She looked exactly as I remember her; older as I’d expected, but not aged. We felt, tho’ it was not said, that this meeting in this charnel of dirt, congealed blood and entrails, was highly amusing. There were no dead animals – just fleshy mess strewn about; lots of work going on. L glanced down. I followed her gaze. On the bloody straw at our feet a small baby, lusty and fine. I wanted to pick it up and hold it for a while. She was fine about that but …then I woke. It felt a good dream.
*** *** *** 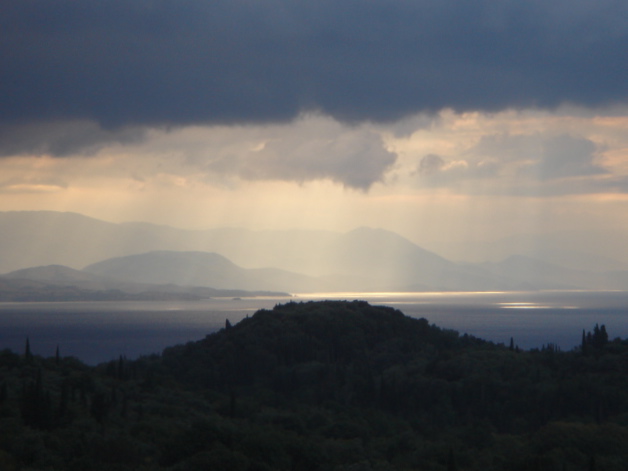 And then the most marvellous thing as glorious us the most beautiful thing - as elusive as the end of a rainbow and as real - the wondrous land; 'a sophism to believe that there is any strict dividing line between the waking world and the world of dreams',,,


'You enter Greece as one might enter a dark crystal; the form of things becomes irregular, refracted. Mirages suddenly swallow islands, and wherever you look the trembling curtain of the atmosphere deceive. Other countries may offer you discoveries in manners or lore or landscape. Greece offers you something harder - the discovery of yourself...(We) for example, are confined by the sense of several contemporaneous lives being lived inside us; the sensation of being mere points of reference for space and time...' (Lawrence Durrell Prospero's Cell) 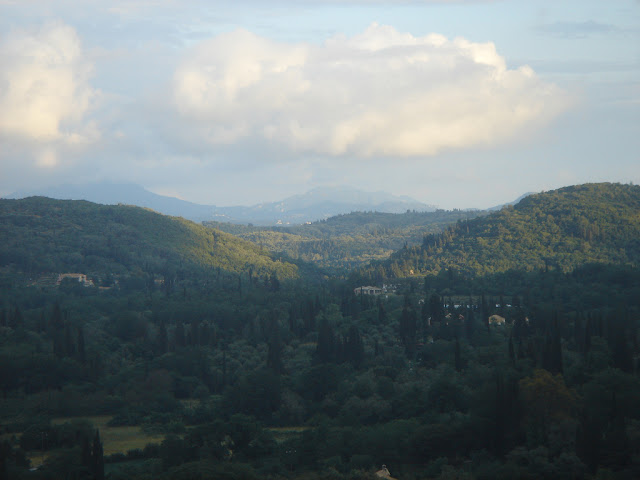 I came back from town after giving blood where Gracie, my nurse, and I chatted about the effect of the weather on trying to plant vegetables as well as her seventeen chickens. She asked me more about my folding bicycle, on which, well clothed, I'd cycled into town. Our driveway is icy and hazardous. I can't find the salt. Our gnome is snowed in. 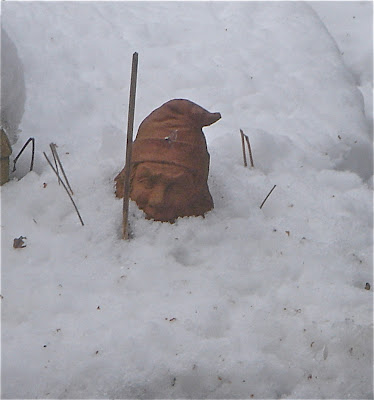 On the kitchen table Lin has left me a note. 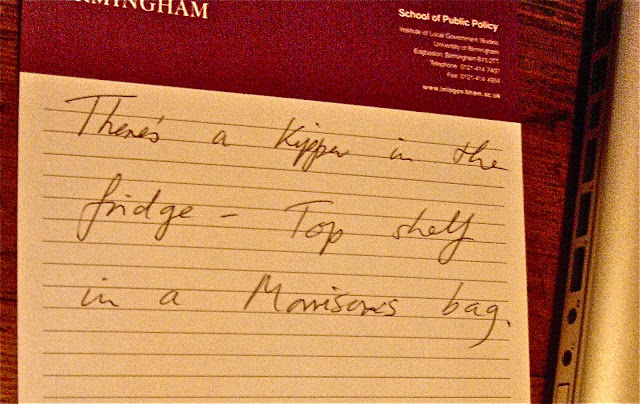 I boiled the kipper gently and served it to myself with a fried egg - mingling herring and yoke and ignoring its tiny bones. A friend wrote 'Your kipper note immediately put me in mind of one of my favourite poems by William Carlos Williams about iced plums. "This is just to say..."'


I have eaten
the plums
that were in
the icebox

and which
you were probably
saving
for breakfast

Forgive me
they were delicious
so sweet
and so cold

We're packing, checking lists of cargo. But the weather has stopped me planting what I need to get into the soil of Plot 14. The cold is forecast to go on for weeks as high pressure over that benighted Denmark Strait draws dirty weather with biting east winds across all Europe, even down to the Balkans.

In Corfu it's still raining daily but the temperature's running around 14 degrees. Lin has arranged with Paul to remove rubble from our apothiki


Hi Paul. Just a question....Will the flattened rubble left in the apothiki be 'compacted' in any way? Thanks. Love Lin x

Hello Lin. We would normally tamp it down and apply water, then tamp again. If you let us know fairly quickly I can get it done this week. Love, Paul xx

Hi Paul, i did say to go ahead with the clearing of baza and levelling, so it would be great if you could get that done this week. However, we don't want the concrete done at this point, as funds are low and we have a lot of outgoings coming up. I'm going to say that again, as we've just had a complete cock-up by a builder over here, who didn't hear what I told him and has put the wrong windows in  my house!!!...We WANT the baza cleared and the levelling and tamping down done. We DON'T WANT the concrete put down. My daughter Amy and family are coming out from 12th till 20th April. It would be nice if you and Lula could come for supper while they're with us. Have you got a spare evening during that time? See you soon and looking forward to seeing the apothiki minus the baza mountain. Love Lin x

The Band of our village was parading through the city as part of the Celebrations of Greek Independence - 25 March. Εικοστή Πέμπτη Μαρτιου ~ Anniversary of the Greek War of Independence Ελληνική Επανάσταση in 1821 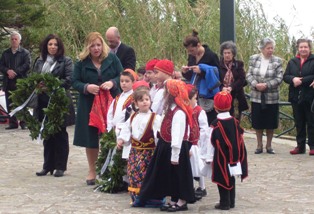 (My translation) Gala weekend has just passed...Sunday of Orthodoxy yesterday, with a procession in Corfu Town, attended by the Band...our National Day today, celebrating liberation from the Ottoman yoke with a programme that included: thanksgiving in Ag. Georgios, laying wreaths at Monument square, participation by the Philharmonic in the parade through the village together with children from the Kindergarten and Special School, to match parades in Kato Korakiana and the City ... all this amid gales.


Osborne's Budget clearly demonstrates how economic policy drives ideologically inspired policy objectives, especially ‘rolling back’ local councils (in the government’s eyes probably the least desired part of the public sector; lowest of the low). To ensure that Total Managed Expenditure is kept as low as possible the so called ‘unprotected’ services have been squeezed disproportionately hard and of course local government expenditure is a large part of the overall unprotected total expenditure. To bring public finance back into balance, public expenditure has to fall from 45% of GDP to 38% - a massive drop. With no growth, or tax increases, the only option is further cuts and in a disproportionate way which hits LAs hard. Whitehall has done better than LAs. If Total Managed Expenditure overall had fallen at the rate of local councils then it would have dropped from £694 billion in 2010 to £632billion by 2014. In fact it will have increased to £720billion. If Whitehall had reduced its spending at the same rate as LAs then the public sector deficit would have been around £35billion. Instead the figure will be £120billion. This demonstrates the distorted relationship between Government and LAs and how our masters value, or not, the two so-called 'partners'. Given the near non-existent LA tax base it is difficult to find much to be cheery about when looking at Local Democracy and how it can be put on a firmer footing (when we are all skidding down the hill!). If you want further proof at the Government's contempt for local democracy look no further than their response to the Communities and Local Government Select Committee: ‘The Government is quite clear that councillors are and should be volunteers and does not wish to see any move towards professionalism through becoming full time’ Local councillors should ‘not qualify for extra allowances to make up for lost income’. Graham Sharp, the former housing minister and Tory party chairman likened calls for additional allowances to paying scout leaders for voluntary work. Councillors are also going to be banned from inclusion in LA Pension Schemes.
Thus do we blight and diminish the prospects of local leaders, so that when our councillors prove less than adequate, as now and then they do, it’s they who get the calumny and not the authors of the new feudalism – Ministers and MPs with salaries, expenses and perks and final salary pension schemes. This is hypocrisy of the highest order – a demonstration of how deeply undemocratic some MPs really are, not to say arrogant and offensive. This is the beast we are dealing with.
Unless some of these issues find their way into Political-Managerial relationships the future is bleak but how to do it require some reflection and finesse. To illustrate further the Parent-Child relationship, look at how the Heseltine recommendations are being implemented. First of all, the Sponsor will be a civil servant rather than a minister and then Local Economic Partnerships (LEPs) will be banned from contacting their Sponsor directly and can only do so through the local official of the Department of Business, Innovation and Skills. Perhaps capturing this absurdity in fiction or play format could better convey the reality of the current state of play than a more formal academic approach.
If there ever was a time for Heroes or Sleuths it must be now. The more I read of the literature and history of the Weimar Republic the more relevant and real it becomes. It wouldn't be that difficult for a ‘perfect storm’ to arise.