“I have no words left for the sea”


Serendipity – endless clues left for misguided atheists. I have been sad that Jim Potts and Maria Strani-Potts are giving up their place in Corfu, for pastures in Zagori, Dorset and North America. Quite unexpectedly, we met them among a crowd of travellers at Kapodistria, awaiting the same flight to London, delayed by a half-day strike. I asked Maria about her new book.
“I have no words left for the sea”
Can writers run out of words more easily than painters out of colours? Homer has one eternal phrase 'wine dark sea, οἶνοψ πόντος' – a formula like ‘rosy fingered dawn ῥοδοδάκτυλος Ἠώς’ that survives enduring recurrence. And Durrell's observation of the 'sea's curious workmanship.' I’m longing to read how Maria has used up words about the sea. I wonder if she’s used ‘shot silk’ with which painters and weavers enjoy boasting their craft – separate warp and weft creating iridescence. I think of zephyrs raising wavelets in the Corfu Straits - raised nap of blue velvet - and, on land, turning up the silver side of olive leaves in the groves below Prophet Elias Προφήτη Ηλία.
*** ***
A letter from Connecticut – from Tony in Salisbury who stayed with us in Corfu before touring Greece – dated 1 October:


Dear Simon. Yes it is a long time but threads are for spiders. So as mentioned in my email I decided to write. What a pleasure to feel my pen gliding over the paper. One forgets this in the faux-urgency – distraction – of the keyboard clacking response to an email.
This summer has been quiet with just family visiting and visited. This fall promises to be a maelstrom – but wonderful. H & I are going to Argentina in November. As I think I wrote H turned 60 and we decided to go to SA in celebration never having been there before. Hear it is very beautiful – will report. Have you and Lin been there? Any suggestions as to things to see. Want to see the deserts of Atacama.
We of course, are totally preoccupied by the Obama-Romney contest. We were very worried a few weeks ago but things have turned up recently. How truly frightening if Romney/Ryan get in! 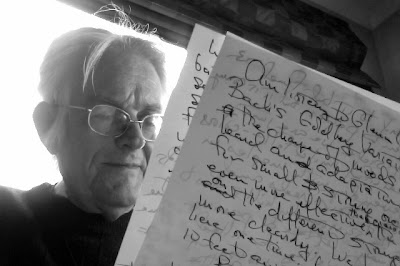 We are also in the middle of battle royal both in our CT Senate seat and our local House of Representatives. Both should have been sure for the Democrats but it is very tight with our candidate for the Senate opposed by a tea-party lady who runs a TV network of wrestling shows allied with a child pornography network. How awful! She has $30MM or more to spend! Even if Obama gets in, the Republicans will be awful, if they control both the house and the house + senate. Helen and I have decided that if they win we will cancel our return tickets from Argentina. Will send you our new address!!! Not really but it IS very frightening.
Europe sounds no better. And poor Greece. They must reform but the Germans have got it all wrong. They force-fed Greece and Spain loans they knew they knew they couldn’t pay – like our banks – and expect repayment. Insane. I have begun work on an article on the nature of national debt along the lines of the explanatory email about our Federal Reserve that I sent you. I am looking forward to it but find it hard putting pen to paper. But it is coming.
On the bright side, we are just beginning a very beautiful mild fall – colors just emerging every day with maples in our valley dotting their reds and yellows over the surrounding hills. Last night extraordinary. After a passing thundershower the valley was filled with geysers of mist rising up to meet the pale white of the retreating sun and then falling back. Alone and in complete quiet I watched from our terrace. A mystery.
Also read Stephen Greenblatt’s “The Swerve” about the rediscovery of Lucretius’s “De Rerum Natura” in the 15th century. Fascinating. Epicureanism not at all the wine swilling credo portrayed by “Christians”. And one learns of the corruption of the church. A good challenging, but easy read. Look it up if you have a chance. You will be amazed what we nearly lost from the bigotry of the church. (Just what is occurring in the Arab world today!)

Am listening to Glenn Gould play Bach’s Goldberg Variations. Amazing the change of moods. Have heard an adaptation of the same for small string orchestra. Perhaps even more effective than piano solo, the voices emerge on the different strings so much more clearly. We had it played here one time. Wow when you hear it played 10 feet away!
But enough of me. What’s up with you grandparents? And when can we have you to this side of “the pond”?
Best wishes and much love to you both.
Tony and Helen 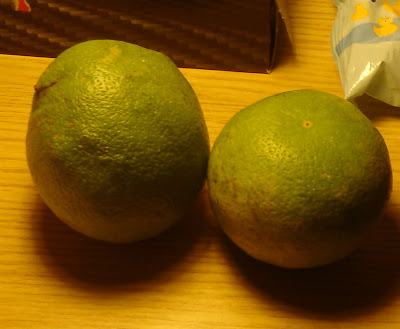 The oranges I brought my mother from our tree in Corfu sit beside her bed where she can see them slowly turning yellow.
"When they're ready I'll have an orange posset"
This afternoon we were discussing Jan Bowman's portrait of Richard that mum commissioned last year. Framed in Inverness this afternoon I hung it opposite her bed and we talked about how much we liked it 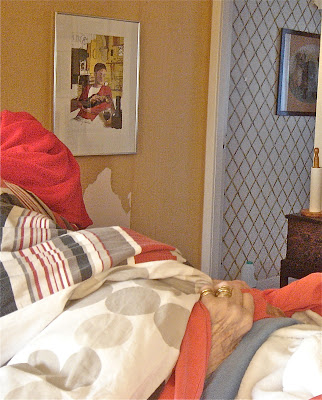 The weather on Friday when I arrived was grey and wet. I walked into the shelter of Inverarnie Wood, paths Oscar knows well and walked until I was lost, then walked until we found the way out along the esker and over the fields. 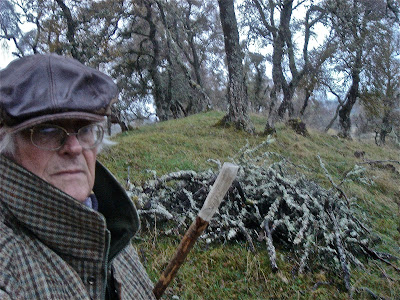 Over the weekend the sun's shown all day, usually low through trees. I walked beside the Farnack with three dogs and with my sister and we talked. I've not been with her for so long in forty years. This is a slightly surreal time, a fermata.... 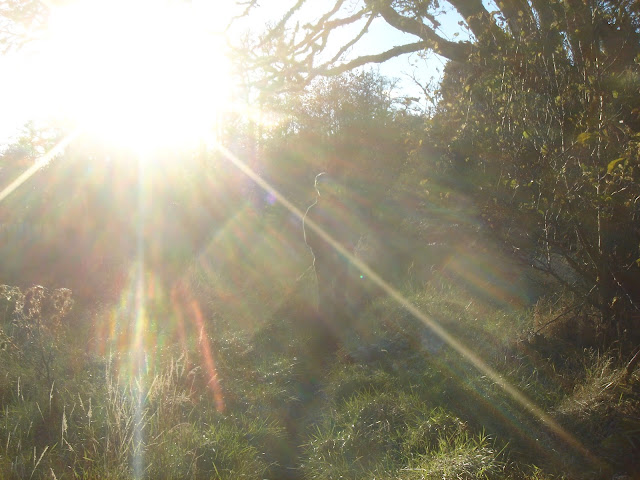 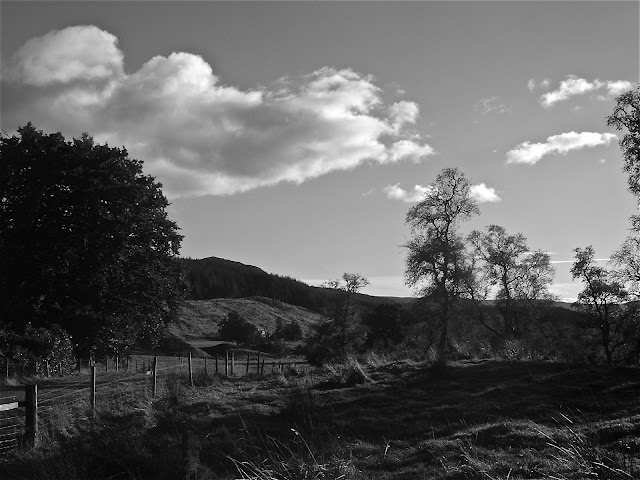