Richard Pine's latest article in the Irish Times contains some gleams about beloved Greece - almost, but not of course, an apology for his usual grimness about the future, a mood with which I'm in sympathy, as with these sentiments, with which he concludes:


....The love and the pluses outweigh the bewailing and the minuses. But the gap is closing.
One could never despair of a country and a people that exhibit, in the face of adversity, such joie de vivre that pushes their bewilderment and misery into a corner. In the village where I live, on the island of Corfu, local expressions of opinion on the current situation are heated to the point of violence, but subside at the kafeneion, as evening continues, into equally heated games of cards and backgammon (perhaps the national pastime).
I for one could never forsake the country where I have made my home, but the gap is closing. Even if a 'Grexit' from the euro results in the collapse not only of the Greek economy but also, possibly, the euro itself, and, as many are now arguing across Europe, of the EU as a credible entity, I would not blame the Greeks. I never loved the EU and I would not mourn it.
Even if we had a military regime – and that is not impossible – I would join the Greeks in resisting it, as they did in 1967-1974, and living in its shadow.
Greece may not be a modern, forward-looking society, keeping pace with the northern march towards unification and 'progress'. Not least because of that idea of terroir, as the French call it – the rootedness of people in their locale, that intimate relationship between land and people that makes them more concerned about their vines and their olives (the grape harvest comes in the third week of September, followed by the long cropping of the olives) than about a factory in a nearby town. Only the sea – thalassa – has been a challenge to the land, and even then, despite Greece’s continuing domination of the shipping industries, benefiting only a few millionaires.
Greece’s potential is in so many areas untapped, even though the areas highlighted by economists and technocrats may not be those I am thinking of: the areas to be exploited are those that create the reasons for loving Greece; and the areas in which Greece is mourned are possibly those where mourning is inappropriate. But the gap is closing. 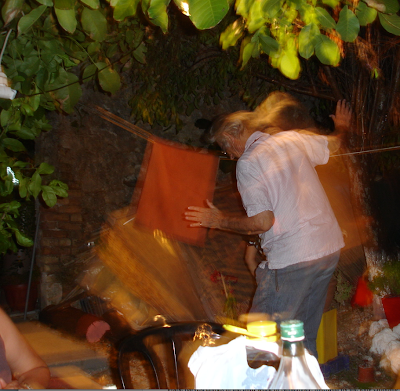 *** ***
There is something about a cistern, an olive press, a well and a threshing floor - ἅλων; something beyond the dictionary, yet as clear as the simple yet magical selection of a combination of notes put together that make an ineradicable piece of music that can be hummed by someone as tuneless as me. 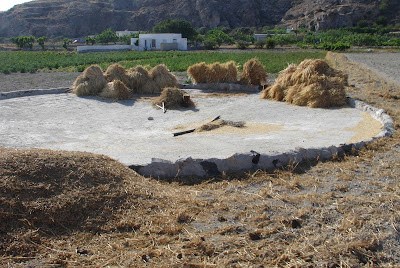