There is no question that the ground on my allotment is becoming easier to work. I'm becoming a little better at gardening. Last year's work removing larger weed roots and clearing debris in the top soil makes present digging a lot easier. I suspect too that I'm more adept with fork and spade. It's pleasing to hear Gill's bees working - following their rules not ours. Φάγε μέλι υἱέ ἀγαθὸν γὰρ κηρίον ἵνα γλυκανθῇ σου ὁ φάρυγξ...Proverbs 13 Son, eat honey, for the honeycomb is good, that thy throat may be sweetened. 14 So shall the knowledge of wisdom be unto thy soul: when thou hast found it, then there shall be a reward, and thy expectation shall not be cut off....οὕτως αἰσθήσῃ σοφίαν τῇ σῇ ψυχῇ· ἐὰν γὰρ εὕρῃς, ἔσται καλὴ ἡ τελευτή σου, καὶ ἐλπίς σε οὐκ ἐγκαταλείψει. .

I see them through their net screen surrounded by Buddleia and flowers.
The two rows of potatoes I planted a fortnight ago are doing better than previous crops... 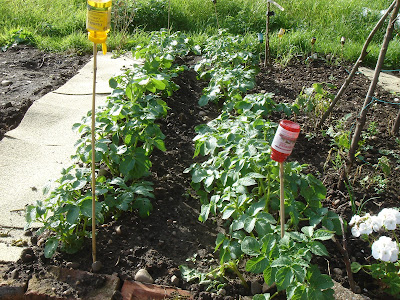 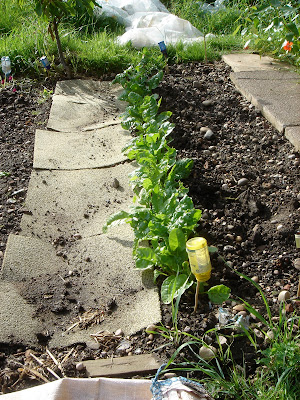 I pulled up the remaining onions; cropped the last of the broad beans - some pods suffering from the damp weather, slug infested - and took the sound ones home after rolling back more black polythene and preparing more ground for planting tomorrow.
Around July 2012 hardly a month after the new Victoria Jubilee Allotments (VJA) were opened Gill had to remove her beehive and bees from the site after a complaint by the wife of someone who had a plot next door that her husband was allergic to bee stings - subject to anaphylaxis. 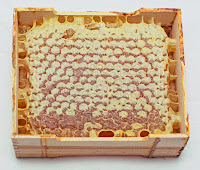 Gill and I needed to run a health and safety relay with risk assessment and review before a new colony could be re-introduced. Jeevan, our secretary told me today that she has had many positive responses from other plot-holders welcoming bees on the allotment. We feel the bees are more secure now Gill's met the conditions for their introduction set by the Council - a precedent which should make it easier for more plot-holders to keep bees. (List of the conditions half way down this blog entry)
This year the Birmingham Honey Show is on 8/9 September at Martineau Gardens... 'a chance to find out all about the fascinating craft of beekeeping, ...talk to local beekeepers, view observation hives, make candles from beeswax and buy locally produced honey direct from the beekeepers.'
**** ****
Amy came round with Oliver. We skyped Scotland and spent an hour's chat with mum and Liz at Brin Croft as Oliver ate and played. The think I like about this still very new way of carrying on a telephone conversation is the way everyone if they want can walk about the room doing other errands and chores while all taking part in the conversation. I like too how I can move the screen camera around to show different things, and how, because the call is free - barring the WiFi subscription - you can just leave the   line open and allow long pauses and use gesture as well as voice and show small objects - like the miniature wedding album (1" x 1") full of tiny photos Lin has made for Amy which she showed to mum and Liz holding it close to the camera as she paged through it.
"I'm still unused enough to this technology Liz" I said "to think for a moment that you're here not there"
"That's because you want me to make you a cup of tea!" 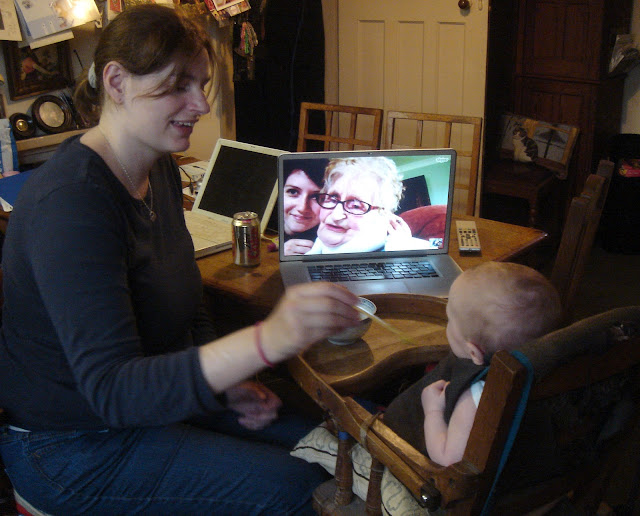 Oliver's was in a high chair which was my mother's in 1918, mine in the 1940s, our children's in the 1980s and now our grandson's.
*******
Now here's a precious book just arrived; a classic by Lord Eversley, a reference sent me the other day by Minoti Chakravati-Kaul, who's about to begin her book on Sir Henry Maine. Lord Eversley is George John Shaw-Lefevre, 1st Baron Eversley PC, DL (12 June 1831 – 19 April 1928) - Eton and Trinity. Co-founder of the Commons Preservation Society... 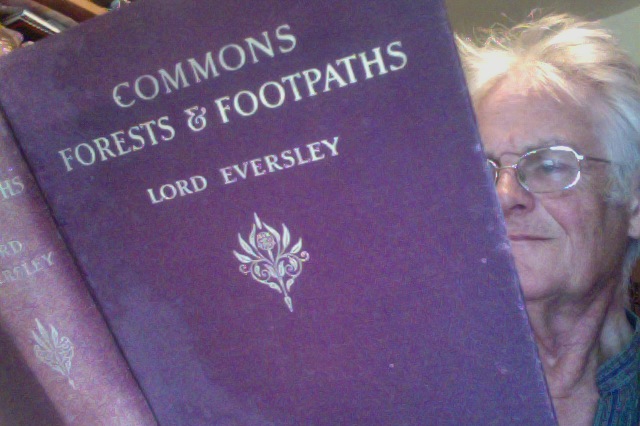 ...The general assumption had been that common land was granted by ’superior lords’. On page 5 written in 1910, the author writes:


Owing, however, to the investigations of Professor Nasse, Von Maurer, Sir Henry Maine, Seebohm, and others, another theory has been advanced; namely' that common rights ‘are in most cases survivals of a system of collective ownership of land by the inhabitants of their several districts, the prevalence of which in the early stages of communitieshas been traced over the greater part of Europe. Under this system there was originally no individual ownership of land. It was owned in common by village communities.

Eversley ends with a quote from the poet Oliver Goldsmiths poem, The Deserted Village,


'Our fenceless fields the sons of wealth divide...'

Read of ecological depravity in the Amazon, but learn first how it began in our green and pleasant land. Minoti wrote:


Dear Simon. yes indeed that para will be in my book to be sure in the great debate. I was re-reading it to include in the chapter as I am likely to annotate all the correspondence of HSM around the whole issue of common lands instead of just a list of letters. So they will be organised in such a way as to throw light on his thinking about the topic and support from his overall insights on comparative historical analysis and jurisprudence.  Here is another book but it is to do with his major contribution to comparative historical analysis : his very useful way of filling gaps in history and historical analysis - if you do not get the book not to worry I have an old copy which I will bring to you if my Corfu trip does work next year. By that time I hope to get a rough draft on my Delhi book as well as this one and we can go through his letters together.
I am going to visit the Memorial bench for Eversley near New Forest and would like to have a copy of the photograph of the grave of Sir Henry if you have it somewhere. I would like to put that or a picture of the memorial in Westminster next to the Eversley one and see how it can then intersperse the letters of Sir Henry in communion with the future.
I will write more later I am about to leave for Tonbridge to visit a great environmental historian at a clinic and to also pay my respects to one of the greatest historians of GB and also of common lands Prof Joan Thirsk and her husband Jim* they are 90 and 100 years respectively. Love Minoti. PS You will be my major milestone on the way to HSM.  George Gomme : The Village Community : London, Walter Scott 1890. He is perhaps the most faithful follower of HSM. M
Prof. Dr. Minoti Chakravarty-Kaul, C-59 Uttaranchal, 5 I.P. Extension, Delhi

*Strange coincidence - that Joan's husband, James Thirsk, now 100, wrote Bletchley Park: an inmate's story and must have been there when my grandfather, Sir Henry Maine's grandson, was there, moving between work at Bletchley and his office at The Broadway by St James Park underground station, where he'd been involved since its inception in the Government Code and Cypher School. When I was about ten I learned Grandpa Henry - Henry Maine - had started doing hush-hush work around 1919. My mum had cautioned me about reticence and I've been reflexively incurious ever since - relaxing only with years, and far wider publicity for wartime intelligence, though even now my knowledge of what was involved is minimal.
"Did you go to grandpa's office ever?" I asked my mum last year
"Oh yes. I used to drop him off there and pick him up when I started driving"
"What was it like?'
"An office. Very ordinary. You know my father also did ARP work during the blitz...night duty on a roof near St Paul's. It was a cover I suppose or maybe he just volunteered."
*** *** ***
Out of Town, I mentioned it a few days back; Charles Webster at Delta has drawn my attention to the pre-offer on Amazon of my stepfather's 9 DVD compilation made in 1986. 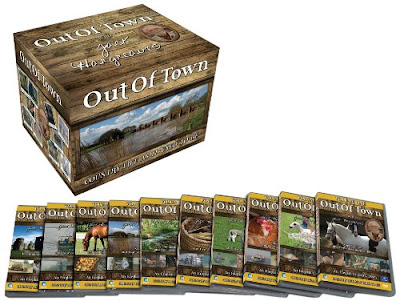 Delta are already displaying these DVDs at garden centres and other outlets across the UK with special offers in The Express and The Telegraph. These, with the exception of hitherto unpublished episodes on Stonehenge and Brickworking are the same films as have been available for a long time, though increasingly difficult to buy without looking for used copies on eBay. The previous licensee, Contender, lost interest in marketing 'Jack Hargreaves'. These films are titled Out of Town but they are not original broadcasts of a programme that ran for twenty plus years on Southern Television. Jack compiled them in 1986, five years after the company lost its franchise, using location film he'd bought from Southern for £1 - in lieu of pension. It will be later this year that Delta will be issuing copies of 34 original Out of Town broadcasts only discovered in 2011. The full set will include notes by me and Simon Winter, of Kaleidoscope, describing what was involved in this discovery (a sample sound track - about the ancient hybridity of the English and the land they encountered when they first arrived) 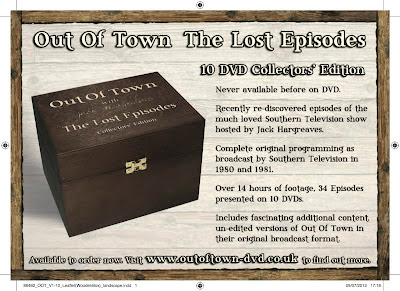