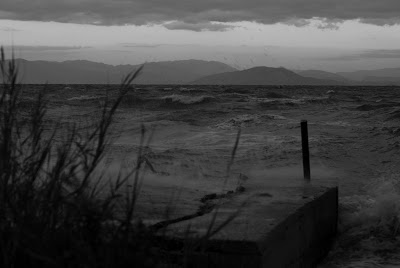 Worse than a traditional nightmare laced with sweating horror, are dreams of incompetence; futile improvisation that goes on and on; the impossibility of mollification; the imminence of confrontation and retribution; a 3 hour exam on a literary subject in which I’d spent months working on the wrong book, and taking twelve puppies into work where every colleague observed silent disapproval rather than, as I'd hoped, being seduced by puppiphilia. I led the doglets through the stainless steel corridor of a steaming kitchen to an annexe where they dug their muzzles into a row of bowls meant for the institution’s approved dog pack. But being pups they couldn’t eat. Returning with the intention of getting hot water and a pestle I was berated by a sensible long suffering head of catering for letting them eat food reserved for approved adult dogs. I was agreeing with all she said until I woke, a placatory rictus still on my face. These dreams are of course about death for which, having never done it, I’m unrehearsed. This morning I made a perfect bacon and egg sandwich. A fresh egg needs to be done in the American way – ‘over easy’; frying and flipping it in the pan without breaking so its soft when laid on the bacon but not so runny it bursts over my hand when I bite into it.
Long ago in America I watched a young man in front of a big hot plate preparing these things for a packed fast food place with such craft and quiet pride. It was perhaps the first lesson I had in America about the value of work - any work. This time after earlier mistakes I got it just right. 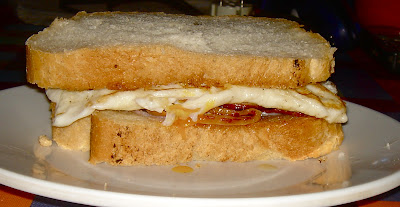 It’s not a photogenic snack but it's delicious - the food of labourers allowed to keep chickens and pigs and make their own bread.
After breakfast I went down to Ipsos harbour with Mark, met up with his brother Paul, and after I’d bailed out rain from the depression in Summersong's cockpit cover they clambered in to peer at the old rusty Yanmar; more particularly at the space into which they might fit a replacement engine.
“Dry as a bone in there and plenty of room for working”
They were optimistic the job wasn’t so complicated if I or they could find the engine needed – reconditioned, delivering over 15hp, with properly organised electrics. By the time they’d done their inspection rain was approaching, the wind slapping running rigging, even on stretchers, against the mast, a whining wind blowing up 5 to 6 from south south east. How I longed to be out there sailing, close reefed, no engine, but it'd be truly unseamanlike for someone like me, whatever my past experience, to go out from Ipsos without a completely reliable engine with the power to get in and out of harbours and get me around in the calms. Paul drove me home.
***
Last night the electricity shut down in the village. Mark – I was again his and Sally’s supper guest – peered through their door over the island.
“It’s gone out everywhere. Corfu town too.”
We’d wondered if this might be a gesture by the power-workers, given strikes on Friday and Saturday. The breaks in power had been intermittent all day, as likely caused by lightning with a few minutes’ pause as new relays switched in on the mainland.
Rain, thunder and lightning roamed day and night, water rippling down the streets and into the storm drains. Now and then hailstones beat a tattoo on roofs and shutters, piling on the floor of the balcony.
Their house cosy with plentiful candles, Mark, gazing beyond the spacious porch said
“There are lights over to the west” proving the point.
The power came on again but we lost WiFi for a few minutes. As I said goodnight the house lights stayed on, but street lights were out – on a separate supply which also powers the pumps that bring water to the village. Back at 208 I nudged our largest bowls below the gutter pipes; rainwater for washing and flushing; prepared night lights, candles and matches and a small propane stove. I’ve got bottled water for tea – and wine to drink. Reminded by loss of water and power, something familiar at this time of year, Sally and I had been discussing how we’d all experience shortages in the ‘crisis’ – the winter weather’s not unfamiliar but now it's got the feel of a dirge, stirring apprehensions. The strikes – not unfamiliar over the last few years – had this week seen people emptying supermarket shelves
“Being on an island, that happens quickly. Supplies can’t get here from the mainland.”
“I tried to put fuel in a can at the petrol pumps yesterday” said Mark, “for the boat. But they’d only let me fill the car.”
I was told of a couple trying to withdraw much needed savings, told by a bank in town they could have only the interest on their investment. Not just in Greece. An Englishman with a Greek mortgage on a house in the village had phoned a friend in Greece to say he could no longer afford the monthly payments and must, after ten years, allow foreclosure on his dream. Paul told me last night – I have neither TV nor radio – that Prime Minister Papademos spoke somberly “on all channels” of a moment midnight Sunday when the country might or might not default, that she mustn’t; that if she did everyone would find it difficult to get fuel and medicine and other “essentials”. 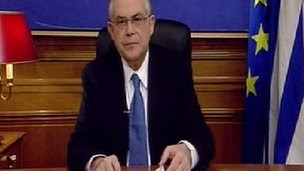 ***** *****
There were a hundred at the seed-sharing meeting at Ano Korakiana's Agricultural Co-op. People gathered there from four-o-clock milling around a square of tables displaying free sample seeds and vine cuttings. I collected tomatoes, marrow and pepper planning to take them for our allotment in England. There were many familiar faces, more people I knew. People greeted one another, waved, shooks hands, sometimes hugged.

Chairs were laid out in rows. At five the meeting began. As usual I had to follow the sound more than the meaning, as a succession of people spoke briefly about the principles of seed-sharing, an initiative only a few years old in Greece, begun in a village in the north; in Drama, 100 miles east of Thessaloniki. All ages were here, animated, engaged, and once the meeting opened to the floor...
...full of questions and statements and rebuttals mixed with approval and disapproval, especially for a local elected politician from the town.
"We've heard enough from you" said one woman, to clapping.
Asking a few people afterwards as we enjoyed free cheese pies, salad and wine, I had the impression younger people were keener on organic farming than the older, some of whom, with longer experience of the labour of agriculture, favoured the idea of GM crops because they didn’t need insecticide and lasted longer in storage. Others argued equally fervently that organically cultivated crops tasted better and could be grown without insecticides. But don’t we know the labour entailed growing your own vegetables, let alone ones for the market without the use of pesticides.
I said to one of the organisers of the meeting how impressed I was by the turn-out and their interest.
“It’s one good thing about the crisis” he said “people enjoy coming together.”


[Back to the future: 1 Apr'12 ~ Last November, French authorities lifted a longtime ban that prohibited French farmers from planting MON810, a move that spurred nationwide backlash and protest.]

I met Sophia joined by her husband Nico
“Come to lunch tomorrow. See you around 2”

*** ***
I’ve begun reading Little Dorrit. Being a 'classic' there’s 40 pages of learned introduction which I almost wanted to tear out to get started though I was happy with Dickens’ own tongue-in-cheek preface – just a page and a half, but at last the first line ‘Thirty years ago Marseilles lay burning in the sun one day’ but even here there are numbered superscripts leading to 20 pages of ‘explanatory notes’ e.g Re 'over 30 years ago.' ‘The book was written in 1855, the setting is 1826 see note 133.’ I’m no better informed. Tear those out too, get on with the story. This will engage me until I’m on my way back to England.
*** ***
At Sophia’s and Nico’s for lunch I again met their son Adoni and was introduced to his fiancée Georgia. As we sat down for lunch the electric, off all morning, came on. They’ve a gas cooker so food was prepared. We ate and drank and talked over village wine, tasty rice and meat, fresh brown bread, stark white feta, which I’ve learned much better how to mix with whatever one’s eating and like it  all the more. Later, sweet Greek cakes and then skirto. Georgia and Adoni will be wed in a church near the city centre on 21 April. I talked of our expected grandson. We pondered ‘the crisis’, the danger for all Europe, Sunday night's predicted ‘zero hour’. Having no TV or WiFi I won’t know the news until Monday.
“Are you going to the meeting about the music school in the bandroom at 5.00?” asked Nico
“Oh can I go?”
“Of course”
I was there at five, rain pouring down the street. Unlike the Carnival meeting at the end of January, there was a paper containing an annual report, an agenda, a committee assembled behind a table, chairs opposite in rows. The meeting lasted three hours, I wilted a little half way through but most of the time was riveted as the sounds went to and fro between committee and floor, between the committee and across the floor, young and old, men and women, one moment quiet, the next in verbal dueling that would rise in loudness and tempo accompanied by animated but often graceful gestures as others joined in, to fall into silence as one person held the meeting, to finish or be interrupted. 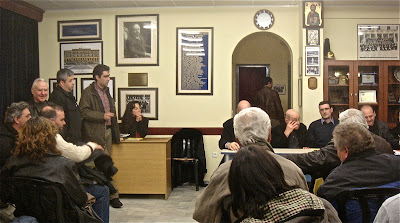 Once or twice tempers rose, one woman was near to tears, then sobriety would return, people grinning, shaking heads, pursing lips, conferring with one another, occasionally wandering outside for a smoke or fresh air. Some would raise their hands to speak, and stand when speaking, others simply joined the fray. It was more Beethoven than Mozart. Five young children were there behaving impeccably for the whole meeting. What was agreed or not agreed and what is to be made of it for the future of Ano Korakiana’s rich music will filter through but I was delighted to have been there seeing a village at work. Afterwards Forte, Lefteri and I wandered home in the rain along an unlit street. Thought their power was back on, the light timers were out of kilter. They’d been on throughout the day on Sunday.
*** ***
Commentary with links on 13 Feb news in Greece from Corfu Blues 'What else can one post?' asks Jim Potts.
Owing to the crisis Ano Korakiana's  Carnival King announces to his beloved subjects that on 26 February this year he will arrive in our village on foot 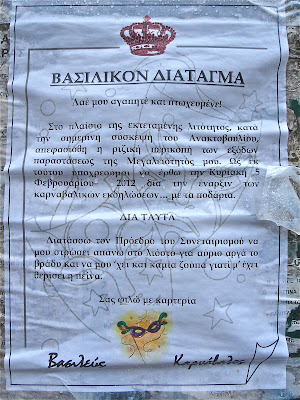