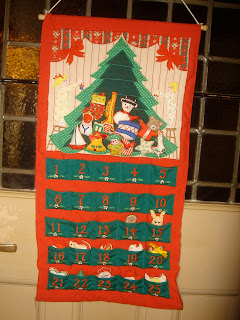 Yesterday morning I'm up early to arrange to collect the tipper truck from the park compound to drive over to the garage in St Peter's Road where the tools and machinery that belong to the Central Handsworth Practical Care Project have been kept for many years. At last we have an alternative place for them in the secure garage of the compound, thanks to Gary McManus of Birmingham Parks and Nurseries, the arms-length city company that looks after Handsworth and other parks around the city.
I'd walked Oscar over to St Peter's Road the night before and introduced myself to Glynis' husband George, who owns the garage. We made an appointment for Monday's move. At the compound in the park where I cycled I found the tipper truck battery again dead. Not a spark. I tried to phone Ian at Cornwall Road Autos. His phone was engaged. I cycled there - about half a mile. He was working in his little office.
"I'll be over in 10 minutes"
Back at the compound I began moving tools already in the tipper's cabin into the compound's garage. Ian arrived to gave the tipper a jump-lead start from his car. We let the engine run a while,
I drove out - pulling in wing mirrors - through one side of the Holly Road Park Gates (the sibling gate currently sags on its hinges, so not easily opened). In St Peter's Road, a mile away, narrow, lined with parked cars, I found a space near George's lock-up. He let me in through his front door then into the garage where I lifted out the heavy iron bolt bar that guards its doors and began transporting an Aladdin's Cave of tools into the back of the tipper; in the case of hand tools into the cabin. The mowers needed two to lift but I managed on my own to heave them onto the tipper bed with the side flaps down. Loaded with mowers, strimmers, hedge trimmers, chains-saws, a leaf blower, and more, I drove back to the park compound. With help from Imran, who works there and has an allotment near me on the VJA, carried the equipment into the garage, laying them higgledy-piggley on the concrete floor. 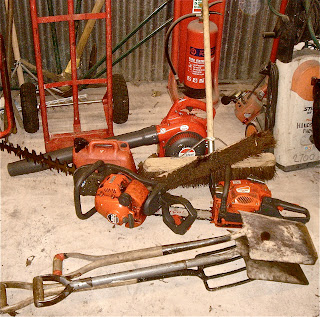 I rang my neighbour John Rose - on the advisory group of the project - who I well knew was already busy on phone and computer with other community responsibilities - and asked if he could manage half an hour to help with my second trip - towing a wood chipper that filled a large part of George's garage. John came as busy people do, and we lugged and heaved at the chipper to get it connected to the tipper's tow ball. Waving by or stopping drivers trying to get through St Peter's Road as we worked. 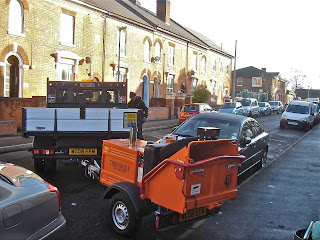 Once back at the Park, Allen Broad took over and expertly reversed chipper and tipper into an assigned space on the compound. We spoke of next steps; neatly storing and securing the tools, planning to sell the truck and the chipper. I'm almost exhausted with small but important details like having the right keys for things and the right cable connections between the tipper and the chipper - one being UK and the other a new European connector for which I must get an adaptor, and as the man at Halfords said "Make sure you're clear which is female and male."


There has also to be a break-away cable in case the tow breaks. It's there but with no clear means of attachment to the tipper.
"That's illegal" said Allen mildly - reminding me of how much attention is required to detail when handling equipment - complicated and frustrating for the untrained, but sensible for all the grumbling in which I will often share about our 'risk averse society'. It's sensible Health and Safety, with insurance and legal penalties for non-observance. All these tools are assets if properly managed. I'm confident that the best way forward for Handsworth Helping Hands (our new and streamlined name) is to make ourselves into a smaller operation, rely on our transit van - now repaired and fit for purpose - and fewer tools. The sale of what we don't need, especially the tipper, will give us some working capital while we look for paid work and seek funding for work that vulnerable members of the local community cannot afford. 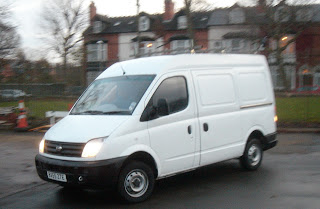 **** ****
Aftab Rahman who runs a successful business in town asked me to write a support letter for a proposed Heritage Trail through Handsworth and Lozells. I willingly sent him one, composed over the weekend:

Dear Aftab. My family and I have lived in Handsworth since 1979. I’ve worked at Birmingham University since 1973, where I remain a part-time lecturer attached to the Institute of Local Government Studies. I’ve been involved in voluntary work over many years, starting the Handsworth Allotments Information Group, campaigning to save urban growing space. I support campaigns for improved transport and safer streets for walkers and cyclists. I’ve written a history of Handsworth Park, co-founded the Handsworth Park Association in 1992, given evidence to a Parliamentary Sub-committee on ‘Town and Country Parks’ and featured in TV documentaries about the area.
I am enthusiastic about your proposal to develop a Heritage Trail in Lozells and East Handsworth. There are many layers of history in this area – past and in the making. It is important for people’s sense of identity and place, and therefore community, that they should have opportunities to align the trajectories of their own journey to this area with those of people whose journeys preceded theirs.

For participants, from inside and outside Handsworth and East Lozells, a trail of the kind you have in mind – one that can be followed by everyone in ways that include access for those with limited mobility - offers an opportunity to re-create, in a defined area of the city, an account of the industrial revolution, the connections forged here to an emerging global economy, life endured through the ordeals of war, fascinating changes in the composition of the area’s inhabitants, as this inner suburb of ‘a great working city’ became the one we know today.
In recent decades the narrative of this, and other inner suburbs of Birmingham, has often been recounted as urban pathology. We who live in Handsworth and Lozells know its ‘notoriety’ is grossly exaggerated, even groundless; that even with its problems, this place is rich in good surprises. A Heritage Trail through its places and spaces – of which you had room to mention just a few - will be a means of imparting a truer and deeper picture of the area, embedding, in the course of an entertaining tour, wonderful stories about ourselves and our neighbours; our ancestors and theirs.
I am happy to support this initiative, willing to join any steering group that might help the project into fruition, and willing to offer my voluntary support as your proposal is developed.  Yours sincerely,  Simon

*** *** ***
Meantime mindful of Durban's Climate Change talks I thank Corfucius for re-posting this comment by Vivek Chauhan, a young film maker, together with naturalists working with the Sanctuary Asia network.

Five years after the initial publication of Worldchanging, the landscape of environmentalism and sustainability has changed dramatically...This 2nd edition of the bestselling book is extensively revised to include the latest trends, technologies, and solutions in sustainable living. More than 160 new entries include up-to-the-minute information on the locavore movement, carbon-neutral homes, novel transportation solutions, the growing trend of ecotourism, the concept of food justice, and much more. Additional new sections focus on the role of cities as the catalyst for change in our society. With 50% new content, this overhauled edition incorporates the most recent studies and projects being implemented worldwide....

Dr Igor Semiletov "Earlier we found torch-like structures like this but they were only tens of metres in diameter. This is the first time that we've found continuous, powerful and impressive seeping structures, more than 1,000 metres in diameter. It's amazing. I was most impressed by the sheer scale and high density of the plumes. Over a relatively small area we found more than 100, but over a wider area there should be thousands of them."
Before long the Merchants of Doubt will be trying to sink their rotting teeth into this depressing news.
**** ****
Tuesday night the Friends of Black Patch Park had their first Christmas lunch together at the Soho Foundry Pub - lamb and roast with gravy and peas and beans and Yorkshire pudding, all for £2 each. Despite the slope up Soho Hill from home it takes me less than 15 minutes to cycle to these meetings - 2 miles there and back via Soho Road. We've been meeting for many years now but this was our first indulgence. Ted Rudge, whose long been a member, was also our guest of honour.

After eating we started our meeting, focusing on the link between the Gypsies and the Black Patch. Ted announced that the Romany & Traveller Family History Society would like to hold their Annual Open Day on Black Patch Park on Saturday 21 July 2012. We discussed the convergence on Black Patch of the Romany, of Charlie Chaplin born 1889 to Charles and Hannah Chaplin in a caravan on the Black Patch before they moved to London, the Soho Foundry created in 1795 by Matthew Boulton and James Watt at Smethwick, opposite the pub where we were meeting. This is an amazing place, slightly scary at times, haunted, ripe for yarns, a place in space and time. I count myself lucky to be its advocate in such pleasant and interesting company.


*** ***
In Ano Korakiana people will be bringing their olives - the little black Corfu olives - to be pressed for oil, mainly for household use, in the well equipped mill below the village.