This February I got an email from a friend in Canada who sails a small boat like one I knew.


Dear Simon. It has been some time since I sent you a note but I thought that you might be interested in the current 'state of being' of Young Tiger. It is still sitting on a flatbed trailer on the farm in Maryland. John the last owner died recently so its part of his small estate that Sara is trying to clean up slowly. No work has been done on it as far as I know but I could be wrong.

He promised to let me know more - if and when. Young Tiger was lent by my stepfather. I repaid him its cost, but could never have repaid the gift of letting me sail her where I wanted. In 1965 into '66 this had been the boat in which I'd sailed to America. the 2700 mile transatlantic bit, between the Canaries and Barbados, and on via the Bahamas to Miama with a Cambridge friend. See her sat half in the sea below a palm, Young Tiger sporting baggy wrinkle and a self-steering vane, and that so sensible gunter rig, that her designer found impossible to market to most weekend sailors fixed on the ubiquitous Bermudan.
I'd gone to work, continued my life imprinted with an inestimable adventure. A few years ago I learned my old boat, having had several owners since I sold her to a young couple in Washington DC to cruise the Chesapeake, lay in a sorry state, far inland. I wondered about her - not nostalgically but nonetheless interested; not expecting twinges.  Last week her owners Sean and Sarah, at Robert M's request, sent me some snaps that included a little blue plaque attached to a bulkhead. 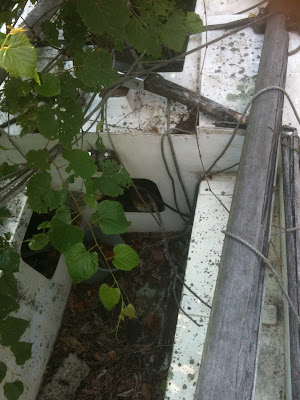 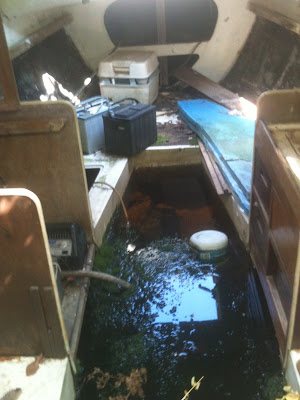 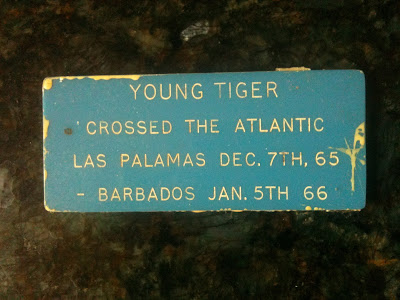 Young Tiger was made at Denys Rayner's Waterlooville factory in 1963. She's near 48 years old, yet I spy in one of those images sent me from the US, spars, all unvarnished now, that I once handled. There's her tiller that I held. There are drawers for cutlery and plates; lockers in which I kept belongings; bunk spaces where I slept, anchored in shallow creeks or sailed through water ten miles deep; rose and fell on the gentlest swells. Young Tiger was our bed-sitting boat, the creation of a wonderful designer, who'd seen another side of the sea over five years in the Battle of the Atlantic. About the sea he wrote "neither cruel nor kind ... Any apparent virtues it may have, and all its vices, are seen only in relation to the spirit of man who pits himself, in ships of his own building, against its insensate power." (Preface to Escort). To me, whom he mentored as I learned to sail and navigate, he said what he later wrote “In any reasonable weather it is the diminutive size of the yacht which makes long passages under sail such thrilling affairs, and one of the reasons why I, for one, find the smallest possible craft the most rewarding” as well, he added, as costing less. "If you're sensible" he told me "you need never encounter really bad weather, but if you do, look to yourself and the boat will do the rest."

*** ***
Last night Linda and I, after our Greek lesson with Niko, went to the first meeting of the ward committee for East Handsworth and Lozells since the election of Cllr Waseem Zaffar in succession to Mahmood Hussain, deselected earlier this year. After the meeting ended Lin spoke with Waseem and his fellow ward councillor Hendrina Quinnen about the work our Voluntary Advisory Group has been doing to sort out the affairs of the Central Handsworth Practical Care Project. Cllr Quinnen has been nominated by the meeting to represent the ward on the management committee of the project.


Dear Cllr Quinnen. It was good to have an opportunity for an informal conversation on Wednesday evening at Mayfield School and to welcome your nomination to the Project's management board. We would welcome a chance to show you more details of the work we have completed, and have in hand, to ensure Handsworth enjoys the benefits of a project that genuinely and transparently promotes and participates in service to local communities. We would very much like to emphasise two things: First we - the Voluntary Advisory Group (VAG) - have been voted powers by a quorum of the Project's original committee, to put in place, 1) the necessary paperwork and procedures to make the CHPCP legitimate and transparent, and 2) working practices appropriate to the project without prior consultation, agreeing that all decisions relating to those powers will be reported to and discussed with the Committee as necessary. In other words, though we have powers authorised by it, we are not ourselves the Management Committee or Board of the CHPCP (though Charles Bates is a member of both the old committee and the VAG), and we are not, unlike the committee, responsible for its liabilities. The reason we cannot just draw a line under the 'old' project and start another is that the accounts of the old project are such that its dissolution would almost certainly entail the loss of assets (two trucks, chipper, strimmers, chainsaw and other equipment) essential to the viability of any new project. We are using a limited pool of resources to settle various debts, including money owed to the inland revenue. We are optimistic that we can start to set up a new project whilst winding up the affairs of the other, ready for an immediate handover of assets, appointment of staff and commencement of work, as soon as the old project is dissolved. We greatly value your continued support in the coming months. Best wishes. Simon & Linda Baddeley for the Voluntary Advisory Group for Central Handsworth Practical Care Project

**** ****
I borrowed Lin's car and went down to Rock Cottage to clear away encroaching greenery in readiness for repair work on the roof.

I chatted to a neighbour on the hill and learned that Stuart who used to run the village Post Office is now completely blind, his post office closed three years. But it looks as if Phil Edwards who runs the village shop is talking with Royal Mail about having a counter in his store. Phil has made the store a great success over the last 20 years. This is typical of him.
** ** **
Two days ago Tim DeChristopher an American climate activist and co-founder of the environmental group Peaceful Uprising was sentenced to two years in prison, fined $10,000. In 2008, he protested a US oil and gas lease auction of public land in Utah's redrock country by the Bureau of Land Management. DeChristopher placed fake bids to buy 14 parcels of land -  22,500 acres - for $1.8 million.  Among his defence statements DeChristopher said "Those who are inspired to follow my actions are those who understand that we are on a path toward catastrophic consequences of climate change. They know their future, and the future of their loved ones, is on the line. And they know we are running out of time to turn things around. The closer we get to that point where it's too late, the less people have to lose by fighting back. " I noted especially these observations (my italics) in DeCristopher's statement to the court:


As a native of West Virginia, I have seen from a young age that the exploitation of fossil fuels has always gone hand in hand with the exploitation of local people. In West Virginia, we’ve been extracting coal longer than anyone else. And after 150 years of making other people rich, West Virginia is almost dead last among the states in per capita income, education rates and life expectancy. And it’s not an anomaly. The areas with the richest fossil fuel resources, whether coal in West Virginia and Kentucky, or oil in Louisiana and Mississippi, are the areas with the lowest standards of living. In part, this is a necessity of the industry. The only way to convince someone to blow up their backyard or poison their water is to make sure they are so desperate that they have no other option. But it is also the nature of the economic model. Since fossil fuels are limited resources, whoever controls access to that resource in the beginning gets to set all the terms. They set the terms for their workers, for the local communities, and apparently even for the regulatory agencies. A renewable energy economy is a threat to that model. Since no one can control access to the sun or the wind, the wealth is more likely to flow to whoever does the work of harnessing that energy, and therefore to create a more distributed economic system, which leads to a more distributed political system. It threatens the profits of the handful of corporations for whom the current system works, but our question is which segment of the public are you tasked with protecting.