My mother in Ano Korakiana

So my mother has arrived. A cane chair plus two broom poles has worked excellently for carriage up and down the steps from Democracy Street. She relies on her wheelchair and pusher, the latter - left at Gatwick by baggage handlers - arrived here yesterday.


Since Sunday, the weather’s grown wetter, cloud enclosing the panoramas. Yesterday morning thunder rumbled over the island, sending small shocks through the house. Gifts from neighbours – walnuts, apples, horta, a jar of sugared grapes. My mum’s been embraced and had her hair stroked by some of the children. “They don’t do that to me in Scotland." The last time I recall this clustering of youngsters around her was as we sat in shade by the stepped pyramid of Saqqara.
Neither we nor she really believed that she would make it out here travelling on her own, but here she is, with praise for the airport’s care in transit. The first day we went out, the windows opened in the neighbours’ house for waves and greetings. I’d told them proudly that my mother was coming here for a week; that she was ενενήντα τρία!
As it is I get vexed at any sign she’s insufficiently impressed. Mum's of the non-Greek side of my family.
“This bread. It’s not as good as French baguettes"
At a restaurant near the sea, she remarks “No hummus? No pitta bread? In London the Greek restaurants have all that. Then a well informed friend told me most of those are really Turkish.”
“Mu-um!”
“Well have they got anything really sweet?”
“You mean baklava?”
There was none on the menu - to my embarrassment.
We went to the National Art Gallery in Kato Korakiana, arriving in state as she does, up the ramp, into her chair, the place to ourselves, but for the staff helping with the lifts, ever solicitous.
“I’m unimpressed.”
“Mum! Didn’t you like anything? What about the Ianni Moralis paintings for example?”
“Who?”
Moralis was married to my Greek step-mother Maria before she married my dad, who mum divorced in 1949, giving me two families.
Linda and I enjoyed ourselves, liking the stark settings of a finely documented sequence of paintings, sculptures and installations, deserving far more time. 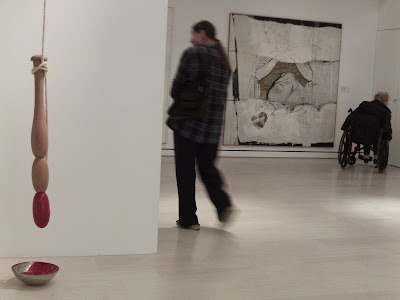 “The El Greco wasn’t good”
“But mu-um, even to have an El Greco in a small gallery – good or bad – is pretty impressive”
It’s the privilege of venerable antiquity to be fractiously vexed.
She and I sat at a café looking towards Pontikinnisi – grey cloud unfurling across the sky driven by a sturdy breeze from the south. “Tell me about this place”. Over a couple of hours with mezes, chips and later baklava and kataïfi, me sipping a double skirto and water, she with a Coca Cola, I chatted with her about Greece and Corfu. 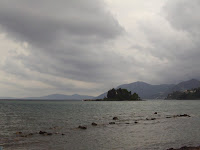 “These are the best chips I’ve ever eaten” she announced adding “I’ve loved just sitting here” We’d had the place to ourselves, the big car park empty, everything stilled with the end of the holiday season.
“Do you want to go out to Pontikinissi?”
“No I’ll get seasick”
Fair enough. The boats for the three minute ride to Mouse island were packed up. No aircraft arrived or departed in the hours we sat. our talk turning to family, my childhood and the things we’d enjoyed, that she’d made possible and how she left my Dad and how she met Jack, and much later in almost another life had created a home in the Highlands for another generation.
Earlier we visited the British Cemetery off San Rocco Square. The little bell rang above the gate and George Psailas came out of the house where he was born and has lived for eighty years to help us up the small step in the little iron gateway. I pushed my mother round the gentle slopes of his flowery garden, she remarking on different plants and shrubs and gazing up to the tall trees that gave us shelter from the gentle drizzle. The mawkishness of artefact and sentiment on some graves was wholly subordinate to their sincerity. “Some do make a good case for cremation though” I muttered too keen to match her tetchiness.
Coming to the misbegotten concrete plinth that since the last two years encases some of the gravestones of those who died in the Corfu Channel Incident we quietly raged, because by then we’d found the place sublime. “Some sincere bean-counter at the impecunious Commonwealth War Graves Commission?" On one aisle between trees we watched tortoises ambling. "Gosh! One of them's having a pee" said Mum "I've never seen that before." We explored the ossuary - long empty - and other plots and heard occasionally the distant noises of the city and the airport.
“Lovely” said Mum signing her name in the visitors' book sat on a table by the gate, protected from the rain by a sheet of plastic. Later George told us there were many more tortoises in the garden since he’d introduced three from a village on the island. “This is a wonderful place” said my mother. “When you and I are over a hundred you’ll come again” he said holding her with infinite gentleness through the cemetery gate. “You know some people are frightened at the idea of living here with all these people in the ground. For me it’s paradise. I have my place here when I die.” 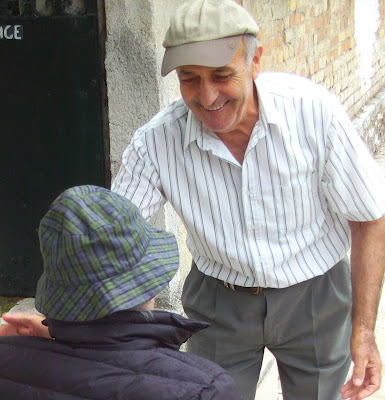 George Psailas
** ** **
Lines I liked from a new story sent me by Graham Hurley:


The noose of recession is tightening by the day. Selling a book like this one won’t ever be easy. People feel comfortable around violence. Anything more challenging is a bit of an ask. Do I really understand what’s at stake here? Isn’t a brimming fridge and a loaded bank account more important than whatever point I’m currently trying to make? (p.106 - my italics)

Dearest Minoti. Would you believe it! My mother has arrived for a week to stay with us in Corfu. She has been chatting away this morning – in the guest bedroom of our small home on Democracy Street in Ano Korakiana - about Sir Henry and the pleasure of your meeting with her, and your letter suggesting she be a Patroness of the Foundation for Common Land in UK and Ireland. She says she would be honoured so long as she’s doesn’t have to lecture or write about something she still feels she has to learn so much about. I have spoken to her about the historical movement from land held in common, to land held by status and then contract – in the context of public green space in Birmingham with which I’m very directly familiar...My mother sends you her love and looks forward so much to meeting you again and hopes to hear from you before then, directly or via me or Sharon.
Do you know the poignant passage in the last paragraph of Forster’s great novel Passage to India; do you recall the lines, when he and Fielding are riding together, about Aziz’s horse tripping on a stone and the thought expressed by Forster ‘not yet, not yet’? 'Even the earth and the sky seem to say, "Not yet."'
When I saw the photo of you and my mother I thought that perhaps – forgive me if I trespass on the deepest of feelings – this meeting between you and her has fulfilled Forster’s other piece of advice ‘only connect’. Perhaps this is the ‘yet’. Embraces from Greece. Simon

9/10/10: Whoops! Saturday afternoon Thanassis and Katya came to tea. Thanassis told me there are two authorities - one for Corfu and the Diapontian Islands and a separate one for Paxos.