Sovereign debt in the Eurozone

I bumped into David outside the village medical centre on my way up Democracy Street to use the internet at Mark and Sally's. I was aware ADEDY had called for stoppages on February 10. "The airport was closed. It's over severance compensation still unpaid after last year's privatization...and there's a national strike called for 24th February. Everyone!" Ian drove by and stopped. "I'll get the cement guy to come and give you that estimate for your balcony." "It's because there's no consensus in Parliament. The Left isn't going to play to the accountants in the EU." I bought bread at the shop; wondered if we'd be able to fly home as planned on 22 February. Meantime we must collect some firewood, do some shopping, and finish off our project to turn the downstairs dining room into a bedroom by filling in the open staircase. Lin and I had a squabble last night over fixing architrave to the opening at the bottom of the stairs. I struggled for an hour to line up three pieces of wood with their forty five degree angles and just could not get rawlplugs to stay in the right place in the uneven composition of the walls. I was cursing the unfairness of walls, wood, rawlplugs and screws while Lin read upstairs after I'd rejected her advice to use glue instead. "How the f*** do clever people do this?" I muttered as bits of plaster fell on the floor and wood and wall remained obstinately unmarried. By one in the morning I was defeated. By half one I was sullenly squeezing gobbets of brown sticky stuff from a tube onto the backs of the architrave pieces. Lin came down and to offer them up and make them fit. Then we stood in silence holding the wood to the wall as the glue set. Perfect. "Do you want a cup of coffee, Lin?"

* * *
Yesterday my email wouldn't work but Rashid at the IT Helpdesk on campus in Birmingham took over my screen - an eerie feeling - and rejigged the encryption and made everything alright. "I'm hugging you Rashid" I said over Skype as he gave me back my mouse. This connection is so vital for as I line up various bits of work in UK during March, late May and June - by which time the political landscape will look different and there'll be more news of recession and reactions to government austerity measures - and not just in Greece. But meantime the stronger economies of Europe, especially Germany, are playing a political role stewarding the Eurozone - thus do feelings about the European dream become polarised as populations of voters in every country feel the discomfort and pain of global recession. 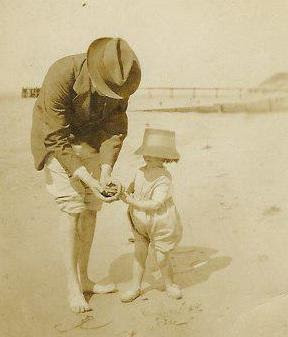 My mum, Barbara, in 1919 with her dad, Henry Maine
Today my mother is 93. We chatted by Skype, the continued snow and the progress of her writing "I'm up to Palestine in 1934." 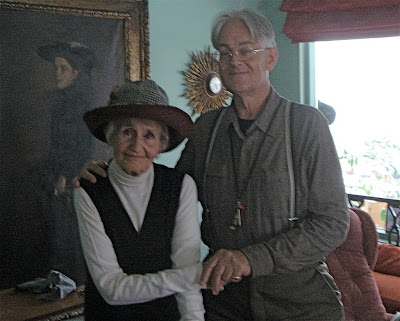 With my mother in the Highlands this January
Posted by sibadd