Good men and women of Ioannina 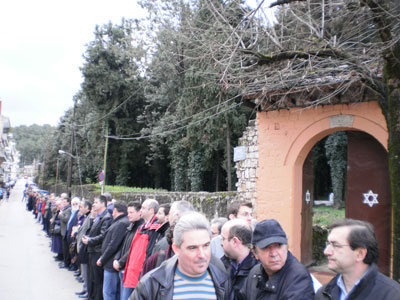 'Let the world know that we value our Jewish presence, one of the oldest in Greece, and will not allow callous, hateful acts to define us as a community or as a people.' The Citizen Initiative for the Defense of the Jewish Cemetery of Ioannina - 18 December 2009

What a sweet piece of news from beautiful Ioannina in Epirus via June Samaras of Kalamos Books who runs the excellent news feed Hellas-Greece:
From: Marcia Haddad Ikonomopoulos, Thu, 24 Dec 2009 12:40:21 +0000 Subject: Christian citizens demonstrate in support of Jewish cemetery in Ioannina

Normally I would wait for our monthly e-newsletter to pass on recent news from Greece, but some news deserves to be passed on immediately, especially when it is such good news. Too often, negativity makes the front page. In recent years, anti-Semitism is all too prevalent. What then can be more emotionally rewarding than to pass on the news of a recent mass demonstration against anti-Semitism? Where did this demonstration take place? In Ioannina! It was organized by the Christian citizens of the city and was heralded as a “a human chain against racism.” The cemetery was surrounded by the citizens of Ioannina to show their support for the Jewish community of the city and to publically show their outrage at recent desecrations of Jewish tombstones. In addition, a public exhibition was held, highlighting the ancient Jewish presence in the city and the importance of the Jewish cemetery as a monument to the long Jewish presence in Ioannina. The committee that organized the public display of support made the following statement: “The Jewish cemetery is not only the religious space of the Jewish Community but, also, a cultural monument of our city, the protection of which, like other historical monuments of our city, is the duty of every citizen.” Let us all applaud the good citizens of Ioannina who organized and took part in this historic event. Photos of the event can be found in the attachments.
Marcia Haddad Ikonomopoulos, Museum Director
Kehila Kedosha Janina, New York 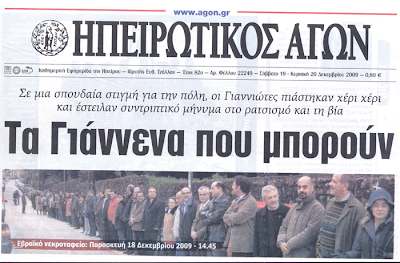 Note the carefulness with which the statement refers not to 'callous and hateful people', but to 'callous and hateful acts'. Some who do evil consider it some amplification of their character, yet evil is essentially as ordinary as good - both start small; both begin with specific and individual choices; 'banal' as Hannah Arendt taught me - engraving her phrase into my understanding of every worst impulse in myself, helping explain it in others, framing atrocities. Banal. Banal. Banal. The Book of Job - of nearly all writing in the Bible, my favourite, has a verse that captures this, personifying evil without turning it into anything but an eternal and intimate presence:
7 ז וַיֹּאמֶר יְהוָה אֶל הַשָּׂטָן, מֵאַיִן תָּבֹא; וַיַּעַן הַשָּׂטָן אֶת יְהוָה, וַיֹּאמַר, מִשּׁוּט בָּאָרֶץ, וּמֵהִתְהַלֵּךְ בָּהּ.
And the Lord said unto Satan:
'Whence comest thou?'
Then Satan answered the Lord, and said: 'From going to and fro in the earth, and from walking up and down in it.'
I subtitle Democracy Street 'waging peace - the banality of good' - Η κοινοτοπια του καλου - because goodness too goes to and fro in the earth.


Ioannina 25 March 1944 Deporting of the Ρωμανιῶτες: 'A voice is heard in Ramah...Rachel weeping for her children, and would not be comforted, because they are not.'
[13 Dec 09: See this drama about The Jews of Zakinthos On September 9 1943, the governor of the German occupation named Berenz had asked the mayor, Loukas Karrer, for a list of all Jews on the island. Rejecting the demand after consulting with Bishop Chrysostomos, they decided to go together to the governor's office the next day. When Berenz insisted once again for the list, the bishop explained that these Jews weren't Christians but had lived here in peace and quiet for hundreds of years. They had never bothered anyone, he said. They were Greeks just like all other Greeks, and it would offend all the residents of Zakynthos if they were to leave. But the governor persisted that they give him the names. The bishop then handed him a piece of paper containing only two names: Bishop Chrysostomos and Mayor Karrer.
On Corfu,  Spiridon Kollas Κολλάς Σπυρίδων, mayor from 1925 until 1951, collaborated with the Nazis, issuing a proclamation, thanking the Germans for ridding the island of the Jews so that the economy of the island would revert to its "rightful owners"]

[Back to the future - 8 Jan 2010: Arson attack on Etz Hayyim synagogue in Hania, Crete on the night of 6/7 Jan 2010]
** ** **
An unintended consequence of Greece's extensive 'grey economy' is that many are, for the moment, superficially cushioned from events in its public economy - the otherwise jobless being paid in cash at the expense of employment protection, insurance and pension investment. Meantime a socialist PM has to balance promises of wealth redistribution with 'belt-tightening'. There's no sign of light at the end of the tunnel, for Europe let alone Greece, unless you believe recession's good for the earth or are confident of having the means to get by. [Back to the future ~ 1 January 2009: Corruption in Greece] 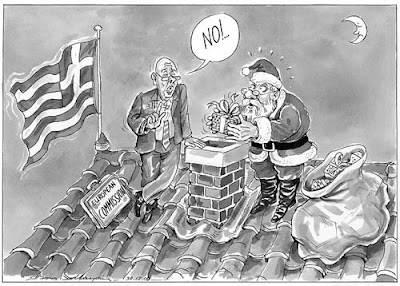 Cartoon of the day ~ Kathimerini 31 December 2009
* * * *
It's snowed more. I strolled half a mile further down the lane with mail for Birch Cottage from the shop. The house was almost camouflaged into the hill behind it. It's owners hadn't been out for two weeks. One said cheerfully "...and I've got the truck stuck. Silly of me." It was a few yards away, snow piled under the large front bumper. "Phone Farquar?" "Yes I might but he's taken the plough up and down twice" "He's a good man. He'll surely help." I walked on following the terriers as they plunged ahead, enthusiastic as ever. They rejoice in snow. I too. Hardly another hundred yards past the sheep, still clustered below the cottage, I heard, then saw, Farquar's tractor entering the muffled landscape. I started slowly back as silhouettes moved around the feeding pen drifting in to feed on a bale of hay delivered from a double-pronged lift. 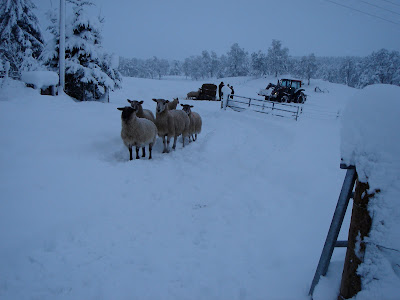 The dogs obeyed me, staying close as we approached the sheep. "OK" shouted Farquar "keep on by!" I edged round, but still cut off one part of the flock which clambered away, then, once I was back on the track, hurried back to their manger. I think Farquar had come to an agreement about another snow ploughing and a rescue of the truck, but for now he headed home, catching me up and surging by, as I waited knee deep the dogs beside me, hardly showing. We waved at each other. 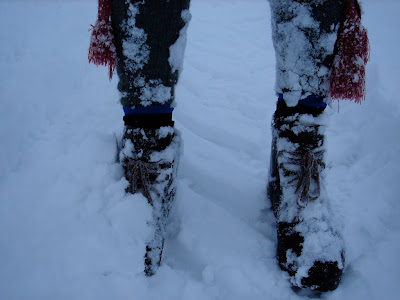