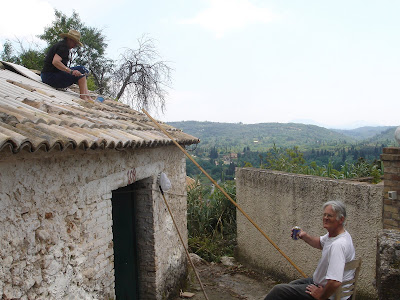 We’re hoping to get at least one side of the apothike roof tiled before we leave for England on Wednesday. The weather is warming up at last. By our standards it's getting especially hot on the roof. * * *
On Thursday we went on Summer Song to Gouvinon Island, also called Lazaretto - Λαζαρέτο - and before that Aghios Dimitrios, about 3.5 sea miles SSE of Ipsos. About to drive from Ano we found our front tyre flat.
"We're jinxed" mutters Lin.
I couldn’t believe the small ‘get home’ spare. Even tho’ reassured by Yianni, our car hirer, we got a lift from Honey and Alan to the harbour. A slight south breeze allowed us to sail gently along the coast in nearly the right direction, past Dassia, Dafnila and little Cape Kommeno, from where we could glimpse the island’s concrete jetty facing the shore opposite Gouvia. With Summer Song’s shallow bilge keels bumping the soft weedy bottom, we moored at its head using fenders and a spring to keep our bow from scraping. 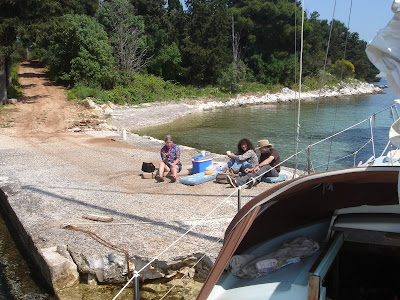 We laid out squabs to enjoy a picnic on the jetty below a red earth path leading into the woods. Then, cresting the gentle slope, we came upon ranked crosses on spaces too small for individual graves, nearly all dated 1948 or 1949. Beyond was a chapel being restored, close to a larger building, also being restored and added to – elevator, plumbing and cesspool - with a European sign reporting a €314k project – a place to tell a local story of people killing one another. It was a pretty place, difficult to leave with a freshened north breeze pushing the boat onto the shallows. Alan on the jetty hauled us round to catch the wind.

I sailed into deeper water leaving him momentarily abandoned, then circled back so he could leap aboard at the bow as we headed north, leaning to the wind, for a delightful passage home – tacking up the coast on small blue waves.

Note: With even the trustiest of sources it’s inconsiderate to speak of other people’s history – Australian or Greek or English - in their presence. It’s one thing to be invited, within friendship, to share understanding; another to presume to impart the case for the truth to someone you are only starting to know. I regret my tactlessness. I need to be more alert to the possibility that liberal inquisitiveness can be experienced as overbearingly impolite.
* * *
E-mail to JM in Australia:


Dear John. I realise that the quikpod is a sort of autobiographical tool - so that you can include yourself and anyone with you in your narrative. The old way is the timed shutter - click, dash and smile and find you've cut off your head in the picture (:)) Since you went the wisteria you and Annie wired up for us has been making steady progress in a variety of directions. A friend tells us it takes 7 years for rhizomes to appear on a new planted wisteria, so we've about five more years to wait. I've bought a spare battery and charger so as to have a starter back up for the boat. Fingers crossed. There have been lots of grumbles here about health services and the delay in the completion of new hospital that you may recall seeing at Kontokali by the main road. One problem is staffing with sufficiently qualified medics and para-medics. Thinking about this I realise that sustaining a fully staffed modern hospital (e.g. to meet the ever-rising health expectations of Greeks as well as a x-European and even global population of potential visitors and expat residents) is a wicked problem on an island of around 107,000 residents. Lin and I were thinking on Birmingham's excellent health support (by and large) but it serves a city and outlying population of more like 6 million. Instead of grumbling we should be wondering about what is actually a feasible level of health provision - what can be sustained. Corfu presents many generic dilemmas about what makes a sustainable community. Have you had permission to yet to use the XY video? How are you doing on film processing - capturing, downloading, editing, compressing? I guess all the video Annie made while here would be good material for honing skills. The ESRC bid that Jonathan Davies and I put together for looking at relations between officials (in Birmingham) and a variety of lobbying group representatives to explore power asymmetry (hierarchy) in what perhaps has been envisioned, rather too easily among New Labour policy-makers to be distributed power (heterarchy) has come together well, though if we're successful work will not start until mid-2010. Thinking about the XY film, I realise how vital is your knowledge of the political context (the 'reading') within which the conversation occurs - not least because it includes, implicitly, a feel for relations of power in the council's political environment. Love from both of us to both of you 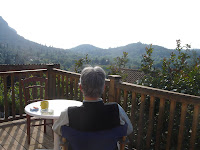 Tuesday morning. Had fresh lightly scrambled eggs on toast for breakfast; then to Lin, just waking, in my best Stephen Fry butler “His lordship is taking tea on the balcony and wonders if you’d care to join him, my lady.” “We better get on with the roof” says Lin. * * * Using the new charger I’ve bought I checked there was a full charge in the spare battery I’ve also bought from Kostas Zervos at Auto Service Electric in Pyrgi to have a reliable back up starter for Summer Song. Dave says “…and get him or his dad, Spiros, to give your starter motor a good overhaul”. It’s ridiculous to be so dependent on electricity, where in other boats I’ve had a pull start outboar 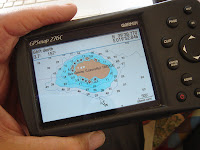 d or a motor that starts with a handle; a flat battery and your stuck. Well not entirely, but calm is so prevalent in the tideless sea beset by calms where fore and aft mooring is the norm and Lin, who’s sailed with me in the fuller seas of the West Country insists “I just want our boat to take us on picnics.” We’re planning, based on the Thursday forecast, an excursion with Alan and Honey, to ‘sail’ (I wish) few miles south to Gouvinon Island, known as ‘Execution Island’ for its doleful use in the recent past; also as a lazaretto for quarantining people with contagious diseases. It seems there’s a jetty there we could use if it’s too messy or deep to anchor “I don’t want to anchor anyway” says Lin “I want to see the island” “Yeah, well me too”.
* * *
Monday. “Let’s start tiling the apothiki today.” I phoned Alan about mix.”Four to one plus lime replacement – they’ll have that stuff at Tzavros”. We went to a sand and cement supplier opposite the marble factory on the Sidari road and paid €9 for 25k of cement and four sacks of sand and rather more for 5 litres of Durolit. We’ve never tiled a roof, so needed to figure how to position the many sized thigh tiles and where to apply our mortar, and even how to get on the roof to lay the tiles. 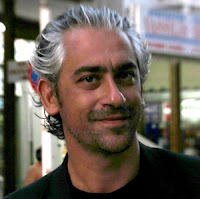 PASOK have made an interesting choice for their spokesperson on the environment in Spyros Kouvelis, only elected to Parliament in September 2007 after fortuitously getting elected from PASOK's state-wide list, partly as a result of ND calling a snap-election hardly a month after that year's devastating fires. 8 May Athens News describes his newness to government, though as an environmentalist he's not new to politics. Thrasy Petropoulos' op-ed ends describes how Kouvelis' thinking on environment policy differs from the current environment and public works minister, Yiorgos Souflias.

"Take his recent town-planning scheme for Attica...In it you have a whole load of sound principles until you come to the implementation level. An example is Mesogia - in eastern Attica - where we are effectively developing a whole new city of one or two million people. The first thing I would do there is put an end to the suburban sprawl. I would think that that should be the number one priority of the scheme. I would like to make suggestions and corrections to the plan but, unfortunately, I cannot. I have to turn it down flat, which doesn't help anybody."