"...the continuing guilt among gentiles over the slaughter of Jews in the holocaust..." 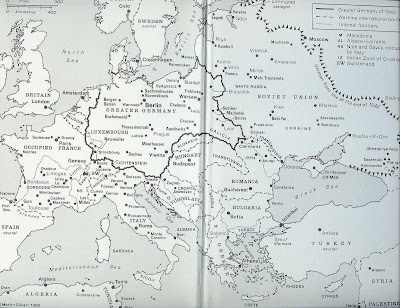 Map from Martin Gilbert's The Holocaust: The Jewish Tragedy Collins:London 1986
I read from the Commons debate on Gaza on Thursday. Sir Gerald Kaufman (Member of Parliament for Manchester Gorton):


I was brought up as an orthodox Jew and a Zionist. On a shelf in our kitchen, there was a tin box for the Jewish National Fund, into which we put coins to help the pioneers building a Jewish presence in Palestine. I first went to Israel in 1961 and I have been there since more times than I can count. I had family in Israel and have friends in Israel. One of them fought in the wars of 1956, 1967 and 1973 and was wounded in two of them. The tie clip that I am wearing is made from a campaign decoration awarded to him, which he presented to me. I have known most of the Prime Ministers of Israel, starting with the founding Prime Minister David Ben-Gurion. Golda Meir was my friend, as was Yigal Allon, Deputy Prime Minister, who, as a general, won the Negev for Israel in the 1948 war of independence. My parents came to Britain as refugees from Poland. Most of their families were subsequently murdered by the Nazis in the holocaust. My grandmother was ill in bed when the Nazis came to her home town of Staszow. A German soldier shot her dead in her bed. My grandmother did not die to provide cover for Israeli soldiers murdering Palestinian grandmothers in Gaza. The current Israeli Government ruthlessly and cynically exploit the continuing guilt among gentiles over the slaughter of Jews in the holocaust as justification for their murder of Palestinians. The implication is that Jewish lives are precious, but the lives of Palestinians do not count. On Sky News a few days ago, the spokeswoman for the Israeli army, Major Leibovich, was asked about the Israeli killing of, at that time, 800 Palestinians—the total is now 1,000. She replied instantly that “500 of them were militants.” That was the reply of a Nazi. I suppose that the Jews fighting for their lives in the Warsaw ghetto could have been dismissed as militants. The Israeli Foreign Minister Tzipi Livni asserts that her Government will have no dealings with Hamas, because they are terrorists. Tzipi Livni’s father was Eitan Livni, chief operations officer of the terrorist Irgun Zvai Leumi, who organised the blowing-up of the King David hotel in Jerusalem, in which 91 victims were killed, including four Jews. Israel was born out of Jewish terrorism. Jewish terrorists hanged two British sergeants and booby-trapped their corpses. Irgun, together with the terrorist Stern gang, massacred 254 Palestinians in 1948 in the village of Deir Yassin. Today, the current Israeli Government indicate that they would be willing, in circumstances acceptable to them, to negotiate with the Palestinian President Abbas of Fatah. It is too late for that. They could have negotiated with Fatah’s previous leader, Yasser Arafat, who was a friend of mine. Instead, they besieged him in a bunker in Ramallah, where I visited him. Because of the failings of Fatah since Arafat’s death, Hamas won the Palestinian election in 2006. Hamas is a deeply nasty organisation, but it was democratically elected, and it is the only game in town. The boycotting of Hamas, including by our Government, has been a culpable error, from which dreadful consequences have followed. The great Israeli Foreign Minister Abba Eban, with whom I campaigned for peace on many platforms, said: “You make peace by talking to your enemies.” However many Palestinians the Israelis murder in Gaza, they cannot solve this existential problem by military means. Whenever and however the fighting ends, there will still be 1.5 million Palestinians in Gaza and 2.5 million more on the west bank. They are treated like dirt by the Israelis, with hundreds of road blocks and with the ghastly denizens of the illegal Jewish settlements harassing them as well. The time will come, not so long from now, when they will outnumber the Jewish population in Israel. It is time for our Government to make clear to the Israeli Government that their conduct and policies are unacceptable, and to impose a total arms ban on Israel. It is time for peace, but real peace, not the solution by conquest which is the Israelis’ real goal but which it is impossible for them to achieve. They are not simply war criminals; they are fools.


Dear Sir Gerald. My political opinion and actions are nearly irrelevant - except to me. I'm now 66. Ever since I learned about the Shoah - as a 10-year-old stumbling upon a book with black and white photos of scenes - obscenes - I steadily congealed, then froze into a position as immovable as an insect in amber - not only revulsion at what happened, but at the relentless convergence of banalities, incivilities, myopia and minor moral failures that converged to help bring about such monstrous things. I don't experience this as guilt - though I could be defined as a gentile - but as something more implacable, disconnected from identity, making me psychologically incapable of distinguishing between anti-semitism - to me, an evil far greater than any other for its demonstrable consequences - and opposition to the policies of the government of Israel. I can deplore but I've been morally stupefied by the imprint of certain images seen in childhood. If mere images, and as I grew up, texts, can have such effect, I can only try to imagine the influence of more direct experience. No-one reproaches me, since my opinion is of such minimal importance and because they're nice to me or trapped in parallel fixative. Your speech in the Commons on Thursday moved me - in both senses of that word - helping me to see through the moral fog in which I've existed for so long, but it would a great reproach to me if anyone thought that I was persuaded by you rather than by my own conscience. Yours sincerely, Simon Baddeley

[Back to the future 22 March 2009: Evidence to which I've opened my mind in recent weeks 'Burning Conscience: Israeli Soldiers Speak out' - a Youtube clip from 2006 - two good men - Avichai Sharon and Noam Chayut, veterans of the Israeli Defense Forces and members of Breaking the Silence Israeli soldiers speak out about recent war crimes in Gaza Breaking the Silence (Hebrew) Breaking the Silence (English) and some analysis of Israel's 'worst enemies - Liberal Jews' Piece on UK government 'backtracking' on preventing war crimes charges against members of the IDF visiting the UK]

[Back to the future - 25 Feb 2010 Listen to the heroes of Israel - the moral courage of Israeli dissidents - Rami Elhanan]
** **
23 October 2010: Only this week have I heard of my friend Miriam Margoyles' support for the ENOUGH - a coalition made up of more than 50 organisations including Pax Christi, War on War, Quaker Peace & Social Witness, Jews for Justice for Palestinians, Palestine Solidarity Campaign, Interpal, Medical Aid for Palestine and a number of Trade Unions seeking an end to the Israei occupation of Palestine: