Parents of Greece could stop this 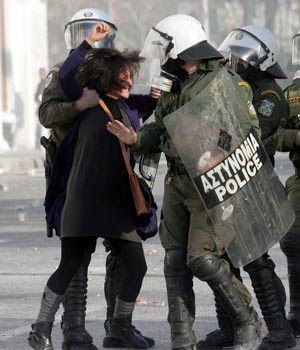 Parents of Greece could stops this educated disorder now, but part or all of them in part approve their children's public action against a rack of concerns about theirs and their country's future. The police are forbidden - since the "anomaly" of the Junta - to do what other European police forces could do to restore order. it is perhaps no wonder some individual officers in the fray of the street or the privacy of cells let loose the feral. The same goes for those they face. This is a dangerous but not entirely unintelligent game between government and some of Greece's best and brightest. It is tragic. It is so so sad to watch this ugly family row in a place so dear. I pray that the impulses of tame klephts remain restrained, but that's an oxymoron. I read the hatred and anger on the Greek web forums against those in the streets and sense the desire, leaping from their fingers to shoot, kill, torture and impound their countrymen, who they call scum and worse. These keyboard colonels, these virtual coupmongers, and those they may prompt to action make no contribution to resolving this long sowed crisis - except like me as part of the chorus. In Axion Esti Elytis describes this Greek struggle

...it cannot be they without you nor can it be you without them… and you must face them without fail…those who wear the black shirt...who speak the language of porcupines, raw-eaters, water-brutes, bread-fearers, the leadenfaced and the neocondors.

I do not refer only to the police. They clearly have their water-brutes, but to all those who lurk - leadenfaced - yearning to start hacking this Gordian Knot.

* * * *
The violence in Corfu in San Rocco reported by the BBC and from a participant via their mobile: * * * * Plato is called anti-democratic. What democrat isn’t, who knows himself and humans - perhaps Kazantzakis’ Zorba – but only after leaving the earth. Plato said ‘justice in life and the conduct of the state is possible only as first it resides in the hearts and souls of citizens’. My ancestor, Maine, warned idealists for democracy that 'democracy is just another form of government’. Its success depended, he argued so well in Popular Government, on the constant exercise of moral intelligence to prevent it falling into the same despotic excesses the idealists presumed exclusive to monarchy. Locked in the intimate company of family and neighbours for months in occupied Amsterdam, young Ann Frank wrote ‘I don't believe that the big men, the politicians and the capitalists alone are guilty of the war. Oh, no, the little man is just as keen...’
* * *
Just got this via a Corfu contact who writes: For non Greek speakers, the reporter is horrified by:


# The screams of children being thumped by the fuzz # Bystanders trying to stop them. # People being dragged along the ground. # Children fainting or being beaten 'til unconscious

BALLISTICS: I've been with a policier pal, no-nonsense type. He says the bullet's been examined and there was NO ricochet. All this chatter from the defence about a "mistake" is crap. Also, he says the 'special' policeman(meaning not at all specially trained) was in his car and fired from the vehicle which was never under attack. I can't vouch for that bit; just quoting an In with an in. Accident schmaccident: Gonna be trouble oop t'mill over this one. You tube description: O thanatos tou Alexi Grigoropoulou den einai memonomeno peristatiko. H elliniki astynomia ksylokopei anyperspistous mathites akoma kai stis eirinikes sygentrwseis gia ti mnimi tou. Dimosiografos zontana metadidei to peristatiko sto radiofwno
* * * *
Kat - American in Athens blog - records an interview with a MAT police officer who describes how he came to Athens from Thessaloniki, choosing the police to have a job where wages, though low, arrive on time. He speaks of a 'broken country'; of being in a force that is ill-trained and unsupported.


"The guy who shot the boy isn’t someone I know, but his nickname 'Rambo' explains it all. I don’t want to know a person like this, but policeman around the world probably all know a co-worker who is (what do you call it?) irresponsible and trigger happy. All professions everywhere have bad people. It is a tragedy, and I understand why people are mad. All the MAT are paying for him, whether he is guilty or not"..."I’m sorry for the boy who was killed, but I want people to understand that many police officers are good. People call us pigs and hicks, and yes there are a few. But we’re human and have the same problems as everyone else, and we care about this country. Thank you for the chance to speak." [Police officer Epaminondas Korkoneas was charged with murder and police officer Vassilios Saraliotis was charged as an accomplice to murder.]

* * * *
11 December: They're speaking of burning cities on Radio 4 with Melvyn Bragg - in this case the two great fires of London. A modern city can't be burned down by men without nuclear weaponry or a firestorm like Dresden's in February 1945. Despite the dramatic images of flame and smoke Athens' present damage will have disappeared by Easter if not earlier. Notwithstanding the misery of shop keepers, the import of these events is not written in material harm. It never is. For an account of what happens when a city is destroyed by fire I think of Virgil's evocation of the fall of Troy in Aeneid Book 2 (Andrew Wilson's 2003 translation). Aeneas, the future founder of Rome, tells Queen Dido and her court how the Greeks - the Danaans - appeared to depart leaving a great wooden horse packed with hoplites on the beach as a gift. The world knows what followed but seldom hears the details as imagined by the Roman genius telling the story, centuries later, of the founding of Rome. I listened to David West's translation read by Richard Pasco on Penguin Audio during a long drive to Scotland ten years ago. Though I'd grown up rooting for the Greeks, I wept at the pity of Troy's destruction, Virgil's account resonating with every other story of the dreadfulness of soldiery amok in the streets of a fallen city.
* * * *
Global Voices covering blogs, videos and podcasts across the world has finally registered riots in Greece and offers a wide range of reactions - including asteris on twitter from Thessaloniki, a Wikipedia entry (which will no doubt be revised especially regularly) and these 30 (at time of writing - noon GMT 11/12/08) films on YouTube via #griots. And here I learn that my respected cyberfriend Stavros has placed a lengthy comment of mine - which he's titled 'From a Philhellene' - on his eloquent blog My Greek Odyssey - my dream about entering the home of a woman [back to the future: 29/12/08 - the Montreal Gazette publishes a belatedly story] * * * * On Wednesday I tried out the web streamed videos on political-management that I've been gently feeding into the web in the classroom. I had my own laptop with its freight of videos to show unstreamed extracts off an external hard drive and for others I was able - using the classroom PC linked to the campus LAN to show some of the extracts I'd posted on my quicklist on YouTube. It was easy to switch between computers and I think the session went really well - with my students, all practitioners, finding it useful to know they could look over the videos again, after reading the paper I'd handed out on political-management leadership. The next challenge suggested and helped by the Cochrane's via Facebook is to do that three minute introductory film to accompany the clips. From Jane C:


I think the intro would need to cover something like: 1 - this is a short intro to a series of x number of YouTube vids on the subject of political sensitivity and leadership, 2 - the videos explore aspects of the complex relationship between politicians and CEOs of local authorities and ? other public sector organisations, 3 - For some people leadership, trust and political sensitivity are natural skills and competences ... but for the rest of us they have to be researched, nurtured and honed - I hope this series will provoke your thinking and point you towards further resource material... you could always put up bibliography for further reading too.

And from Peter C who also sent some useful URLs


1) Use very few words 2) Use a big bold font 3) Use simple, telegraphese, style 4) Let pictures get your core message across

* * *
Flickr photos of the events from Teacherdude and Πορείες για το νεκρό μαθητή
* * *
A Greek blogger - Tempel or rebel - comments on narrowcasting:


And finally and most important the blogging…After french riots in 2005, Greece verified the rule : Blogging and internet are established as alternative source of independent information. Not because bloggers are objective, the opposite!!! But they are now too many!! So someone could read a variety of opinions that usually gives the whole picture. In that sense information on internet exceeds the limits of traditional media. The whole political spectrum is expressed here, without limitations of time or political correctness. And that helps the political dialogue significantly. And here comes the videotapes. The current riots boost a distribution of images by cell phones, amateur videos, photos and information on incidents minute by minute. Greek bloggers were testing the limits and discover that is not such thing. There are not limits in our passion for open and accessible information

[Back to the future 29 December 2008: 'Social media and the Greek uprising'] [Back to the future 10/01/09 Teacher dude speaks - last November but just read - of the tension between broad and narrow casting, between mainstream and webstream, between those who wrote and those who type, and how this is evolving in Greece]
Posted by sibadd