When I am not there I imagine Greece When I am not there I imagine Greece. This was painted far inland - in Michigan - recalling a moon so bright it dazzled.

I met with two friends - one English, one Iraqi, to plan the arrival in England of an academic refugee - and friend - from Basrah. The Council for Assisting Refugee Academics has granted money for subsistence and the University of Birmingham has waived academic fees so he can study for a PhD. I phoned him in the Middle East to go through details and hearing his voice for the first time in two years. There's still a long road. Getting visas is the next problem. We discussed this over two hours and covered many practical issues.

Kim, my friend and editor of the book to which I'm contributing, is sending me back to rejig my chapter. Her advice is good but it means I can't yet say goodbye to my writing yet.

Amy and me put up the nice old bed we'd driven down from Scotland on Monday. It was in Mains of Faillie and her grandmother has given it to her. Old dark wood in tudor style; a family bed being passed down.

This May, the New York bank J P Morgan fired Mike Savvides, head of derivatives sales for Greece, after prosecutors began investigating how Greek pension funds bought €280,000,000 of government notes at face value hours after J P Morgan underwrote them at $0.93 on the €. (Current exchange rate $1.00=€0.74 or €1.00=$1.35). Various people must have trousered a lot of money through selling overpriced government bonds to Greek pension funds. The 'Greek bond scandal' has rumbled on in my peripheral vision for months. It forced Labour Minister Savvas Tsitouridis to resign and prompted Kostas Karamanlis to overhaul investment rules for state pension funds and it looks as if there's more to emerge. I wonder what the Greek equivalent would be for chickens coming home to roost. I don't understand international finance - along with 99% of the population - but I suspect we can all smell a rat (what's the Greek version of that?). Who blew the whistle on this? The Zorbas Report, forthcoming, may apportion blame.

Monday 13 August: I've done this journey so many times. 450 miles from Strathnairn - 7 miles south of Inverness - to Birmingham. The M6 motorway covers the greater part of the route, its three southbound lanes passing through the Lake District, blighting the landscape with the unending hum of traffic. 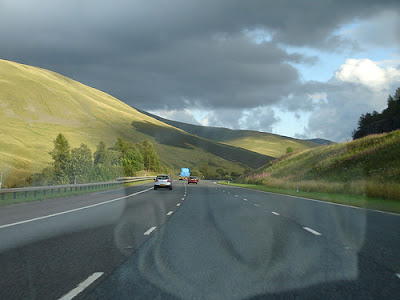 I far prefer travelling by train but in 2007 and for the past 40 years I've been making the journey, especially when there is more than one person, travel by car is far less than the cost of a rail ticket - £25 each in petrol for Lin and me, but around £80 each for a single rail fare between Inverness and Birmingham.
Posted by sibadd