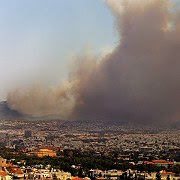 In Birmingham it rains and rains. Meanwhile in the wondrous land I read about ferocious flames fanned by gales burning the northern outskirts of Vagelis' Gotham City - destroying the suburban homes homes of Nea Penteli, Melissia and Vrilissia, blackening the slopes of green Penteli. The meltemi drove destruction down the mountain. People threw belongings into their cars, fleeing the fire and the explosions of propane gas boilers. Planes dropped water as Athens broiled. "Strong winds and smoke have hampered our efforts," said Evangelos Falaras for the Greek Fire Brigade. "We can't zero in on the flaming region. So, much water is falling off target" shorting power cables. Penteli was burned by arsonists in the mid-1990s. Reforestation had transformed the region into one of the last areas of greenery accessible to Athenians.

I'm beginning to understand why it's so difficult to obtain proper maps in Greece - ones with details of planning intentions, of the kind I and other lobbyists have been able to refer to when campaigning to save green space from the political pressures to build on parks, playing fields and allotments. Maps are political - but in Greece they are too political. Greek land has constitutional protection, but its use is not, so far as I know, defined in detailed land use 'bibles' prepared every 20 years or so to link land use or what we now call spatial strategies to maps of an area - what we call Local Development Plans, Unitary Development Plans or Structure Plans.

Perhaps I should be pleased we have no constitution - since our legal system is a living thing based on precedent and practice; not fixed in the amber of grand language. I'm sure sophisticated maps exist of all Greece - for military purposes at least - but most people are without access to detailed maps of the kind that could be pinned on a wall at a public meeting or laid across tables in a kafenion or someone's sitting room where it's implications can be debated. Citizens cannot inspect zoning plans for an area. A senior researcher at the Forest Research Institute - who wanted anonymity - suggested to one Agency (SPIEGEL ON LINE NEWS "Forests don't vote" 17/07/07) that Greece’s forest management policies are a contributing factor. Forest protection is written directly into the Greek Constitution, so it is difficult to rezone forest land for other uses - even on the edge of growing cities like Athens. There are no official maps indicating the boundaries of forests, so once trees have been reduced to ash, developers claim land. Desire for land to build on may lead to arson. "This is the heart of the problem. Politicians, though, would never touch it. It wouldn't be so difficult to provide good maps, but they don't want to because there are so many votes involved.”

Elections are in September. Will 'unofficial rezoning' figure at the ballot box? How can local and national politicians make this into an election issue. It can't just be a national issue because the land market in Greece is driven by international custom - look at us! This is why I'm pleased that our home in Corfu is deep in the sokaki, but even so we are having an impact on the character of Ano Korakiana.

No man is an island. Isn't it ironic that someone at their computer screen in Greece can call up the detailed structure plan for any area of England and even lobby local politicians about a local plan in my street in Birmingham, but I cannot do the reverse. This is the best plan I can get of Ano Korakiana from the Municipality of Faiakon in Corfu. I love to look at it for what it reminds me of the beauty of this place, but it's as much use for land use planning as a glamour pin-up for an abdominal surgeon: 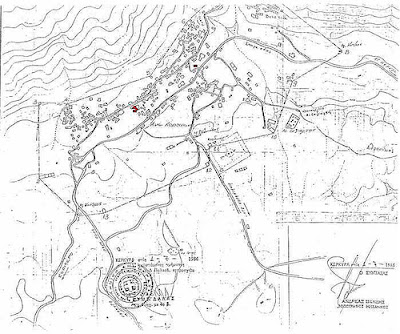 But see: THE GREEK NATIONAL STRATEGY TOWARDS SUSTAINABLE DEVELOPMENT and official opinion from Greece on EUROPEAN SPATIAL DEVELOPMENT PERSPECTIVE (ESDP), and National Reporting on Greece to the Twelfth Session of the COMMISSION on SUSTAINABLE DEVELOPMENT of the UNITED NATIONS. The critical thing is the adoption of professional analyses and prescriptions by political heavyweights. Looking through agency reports the President made the environment a key note headline in July, and there have been statements during the height of the fires from ND, Pasok and KKE leaders but I didn't see anything about strategy. It's more about visits to shake hands with emergency workers rather than meetings with planners. Kapodistrias-2 for the reform of local government is significant, but such things provide no photo opportunities. This is not to knock politicians, but it is to express hopes for Kapodistrian style statesmanship, managerialism, detail detail detail - driven by political will. How do you make a Structure Plan sexy?