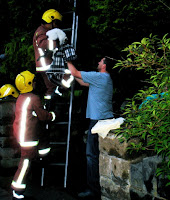 Mrs Kolcak, our neighbour, came to the door to say their big old cat had been scared up a tree after being set upon by the next neighbour's dogs. Specks of blood were on the rockery. Within minutes the West Midlands Fire Brigade arrived - five men in a big red fire engine. An extending ladder was raised. A young firefighter got the miaouing cat under one arm and carried him down through the awkward foliage. We clapped. "My fourth cat" he said. Cat, shivery but unhurt, went indoors to be fussed over.

This is from the 'north central' section of Stephan Jaskulowski's map of Corfu. It shows Ipsos Harbour to the east. Ano Korakiana to the west. The the winding roads to Sokraki and Spartillas to the north. It's 10 years old but still works for getting round by car, bicycle and foot - philhellenism at work! As good a map of the island and the city as any I've seen. Of course there's the detailed sections of the Corfu Trail and, no doubt, military maps* we can't see.

Stephan went all over Corfu with a GPS on this amazing project. How well he must know the ground. The section of his map I've posted is unpublished. Stephan, in Nottingham, sent it to me and it's helpful for guiding visitors over the five kilometres between Ipsos and Ano Korakiana. I've put a white cross on the map to show the whereabouts of 208 Democracy Street.

*In the sixth chapter of Prospero's Cell Durrell mentions in his diary - 8/8/38 - that 'Bocklin has walked over the hills from Metsovo and arrived in the island' ... 'a tough looking specimen of the new Germany'. Bocklin, who Durrell knew in Paris as a 'seedy blond youth', unknowingly allows Durrell to discover, in a guest room at the White House, 'a bundle of accurate architectural drawings of the main harbour and fortress.'