How to write a letter 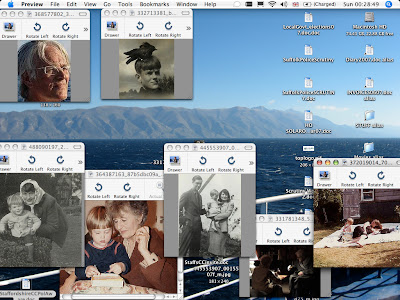 Perhaps there's no substitute for leafing through a family album alone or with someone close, but I do like scrolling through the years on my laptop. Thinking of the new life on Friday I ran through old images and found I'd got a composite of family pictures strewn around my screen showing Albania's Karaburan Peninsular, jumping between now and 1944. [A click on the image hyperlinks to a larger version] I discovered how to capture the contents - at any one moment - of my screen. Click on an image. Up comes PREVIEW on the toolbar, then FILE>GRAB>TIMED SCREEN. A tiny white pie appears and turns clockwise blue. What was on my screen becomes a JPG image in its own right. Wow - new toy! There's me in Greece last September - white haired bloke snapped by Lin. There's me with the same glower with mum long ago snapped by dad; me with her and dad, born of their brief wartime marriage, and me at 10 with jackdaw Jim - a collector, like me, of unconsidered trifles. There's my son with his grandma 40 years after that snap of her with me, and another with his mother 20 years ago snapped by me, and as background (but better viewed by clicking on the title of today's blog - 'snapping and clicking') the view of the Albanian coast on a morning in February this year - land and sea giving themselves to jollity. (Amy's keen to use screen capture to play a trick on her mum - capturing her actual 'desktop' and turning it into an image of her desktop - so when she clicks on a file she wants, 50% of them won't budge. Ha ha ha! Plato would have liked this one "forget about my cave analogy for the fallibility of human perception, imagine a trick played by a daughter on her mother on a computer screen!")

[Those destitute of philosophy are like bound prisoners in a cave, only able to look at a wall in front of them. A fire behind them throws their shadows and the shadows of objects behind them on the wall. Regarding these as real, they have no notion of the objects to which they are due.]

Last week I got 'NetFuture #169' - an e-mail circular I've been ignoring - with passages from Steve Talbott's 'Devices of the Soul: Battling for Our Selves in an Age of Machines'. 'Does nature rejoice in the morning?' I prepared to delete a sermon but read on. The essay explored feelings habitually relegated to the divine - though he doesn't mention this. I'm prone to attributing feelings that are mine to my surroundings. Wordsworth entranced me: THERE was a time when meadow, grove, and stream, The earth, and every common sight, To me did seem Apparell'd in celestial light,... ...I hear the echoes through the mountains throng. The winds come to me from the fields of sleep, And all the earth is gay; Land and sea Give themselves up to jollity, And with the heart of May Doth every beast keep holiday I love that poem but Arnold's Dover Beach is also a favourite: '... for the world, which seems to lie before us like a land of dreams, so various, so beautiful, so new, hath really neither joy, nor love, nor light, nor certitude, nor peace, nor help for pain.' [Back to the future: yet...] Every now and then I have moments of joy in ordinary places - a very busy loving God, utterly careless of my clumsy attempts to be rid of him, sending a witty reminder that He knows where I live. I don't reject these experiences. Quite the opposite. I'm very lucky to have them, but when I look for secular explanation, ancient language engulfs me. '... if I make my bed in hell, thou art there. If I take the wings of the morning, and dwell in the uttermost parts of the sea; even there shall thy hand lead me, and thy right hand shall hold me.' I'm consoled by such prose, concreted over by new translation. I've seen the sun leap from the sea many times; seen the waves jocund; seen them glower under leaden clouds dreading the unwelcome moment the sun leaves us to darkness. Talbott conjectures gently about such sensations, quite free of defensive rebuttal. The web's so useful for pulling up lines I can't recall. To find the exact lines - 'and we are here as on a darkling plain swept with confused alarms of struggle and flight where ignorant armies clash by night' - without a search engine I'd have had to go upstairs, find 'Dover Beach' in the Oxford Book of English Verse and transcribe - a chore compared to cut and paste.
Only the other day someone asked me to send them a 'letter'. To make one of these you write with a pen on a piece of paper, fold it - the paper not the pen (I'll explain that later) - put it in a - what d'you call it - an envelopethingy - on which you write an address - much longer than an e-mail. Then you get a small square of gummed paper, lick it, stick it - honestly - and ... this 'stamp' goes on a corner of the envelope. It's how you pay for the service. The wierdest thing is that when you have sealed the envelope - more lick - you go out into the street - seriously - holding the letter in its envelope with an address and stamp and you walk up the road until you find a round red box - a pillar box - on the pavement with the Queen's initials on it - E II R - (some have previous monarch's initials on them - G V R, G VI R even VR - being in some cases over 100 years old - the R for regina or rex) and a slot near the top. No really! It's true, my dear great grandchildren of the future. You put the envelope in the slot. It disappears. Then, and this is the true magic of the process, this same envelope with your actual writing, even your lingering aroma,

saliva and finger prints, was slipped - most of the time - through another slot in someone else's home a day or two later - having been intercepted in the interim and a 'frank' placed over the stamp, so's it can't be reused. Can you believe that? This is what the pillar box looked like with an envelope being put into it. The stamp is in the foreground. "OK little know-it-alls, so you've got one on your vegetable garden as a bird box." [I shared thoughts with Steve Talbott on what he'd written. He replied: Simon. I could hardly have received a more satisfying note than the one you have so kindly sent me. I would only question your characterization of yourself as an atheist. I suspect you are rather an areligionist - not a bad thing to be, in my book! Many many thanks for your beautiful words. Steve stevet@oreilly.com NetFuture editor: http://www.netfuture.org]
* * *
George Seferis on Poros wrote “Life is so beautiful that if Homer had not been blind he would have written nothing.” I must register this. There are things I need to see. Films - one about Seferis but also one about Maria's first husband, Yiannis Moralis. George Seferis, presumably when he was Greek Ambassador, lived for a time in Sloane Avenue where Dad and Maria lived for part of the 1950s and Dorothy in the early 1960s. Next time I'm cycling through I'll look out for the poet's blue plaque.
Posted by sibadd