Errands day. Mowed lawns, fed fish, put out nuts for birds. Saw a Greater Spotted Woodpecker in the garden. Great Tits are nesting in the bird box Amy made. The sun's shining between showers. I'm spending too much time on the computer still entranced by the window it offers to hop and skip about the world in tune with my jackdaw temperament. Lin's using freecycle to clear the house of a plethora of things we don't need. 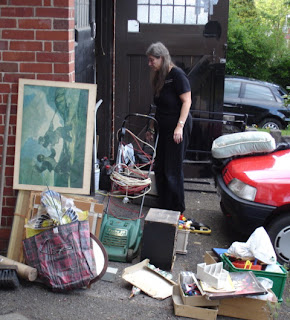 She sells things through eBay and now Ebid "eBay's got too dear". I haven't been in the University Library since they installed turnstiles a decade or more ago. All the reading I need for keeping up I can get from the papers and books I identify from web references, the remarks of colleagues and the people I meet when teaching round the country and some specialist websites, as well as the on-line library now better set up for being accessed by computer than by humans searching stacks - with the exception of the rare books and manuscripts section. Yet I love books and resent the lack of quiet public space to enjoy them. I see the Evening Mail published my letter this Tuesday:

'Sir. I’m vexed to learn that the Council is seeking an application to extend the presence of the BBC screen in Chamberlain Square – especially now the Town Hall has been renovated and is looking so good. Because no-one makes a public fuss about it I wonder if those asking for it to stay have any sense of how some resent its presence and were looking forward to its removal. This massive TV screen, with its constant sound track, blights an area meant for rendezvous, debates or strolling through, turning it into an open-air domestic space encouraging passivity and blemishing the Town Hall’s façade. 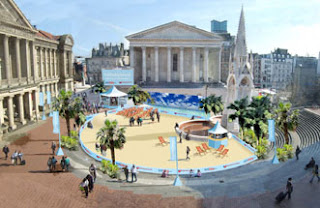 The prospect of an urban beach with deck chairs from which some can watch the tennis this summer is a further example of the way a civic square that is part of Birmingham’s identity has been confiscated from the rest of us to allow part of the population to accumulate yet more hours in front of the television. Yours'

[Harumph. The screen overlooking Chamberlain Square will go in October but from June to September the Council is supporting a £50,000 beach for the public paid for by a cheap flights airline. 'Visitors to Birmingham will be able to relax in deck chairs under palm trees, play volleyball and watch live entertainment on the BBC TV Big Screen' was a recent news item. One councillor says this is fine "because it worked in Paris", but there Mayor Bernard Delanoe's 'Paris-plage' runs along the banks of the Seine reclaiming it from a busy dual carriageway for the summer]

Cycled to campus via the canal yesterday Oscar trotting beside me and in a courier bag when on the roads at either end. It was a colleague's last day at work after 30 years. We signed a card, made a donation and had a chat, bringing Oscar to be stroked. Also half an hour with another colleague, off to a conference in America on leadership. He's helped with my thinking and teaching. The day before I went to a meeting in Llandrindod Wells and my train broke down at Wolverhampton. To get to the meeting I paid £107 for an 80 mile taxi ride with a fast nice driver from India [he told me when we parted with a wave and an exchange of first names, having arrived on time]. Later I sent a letter of complaint to the train operator plus copies of tickets and expenses (all takes ages which is why some don't bother). The most I'll receive for my trouble will be an ill-phrased apology and a futile explanation.

'The ship sank as a result of coming into contact with an iceberg. We are very sorry for any inconvenience this has caused to your journey. We hope you will continue to travel with White Star Line.'

This has happened three times with the same rail operating company since January 2006. Yet I enjoy travelling in trains far more than in cars.
Posted by sibadd