Lists of things to do 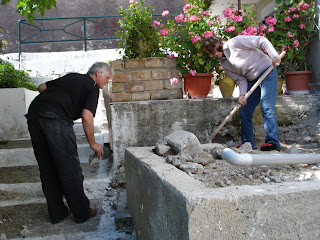 Wednesday, April 18, 2007. The lady from across the street offered skilled helped cracking away one of the breeze blocks enclosing rubble in three concrete enclosures put up by the last builder against the side of the house. They’ve been collecting and storing damp that has been entering the house. They look ugly. Another neighbour was reassured I wasn’t dumping the emptied rubble off our property. She saw the first six barrow loads strewn in the garden as planned and said 'sorry'. On the car by the museum Lin found a a civil note in Greek and English pointing out she’d parked across a two car space. We had a picnic lunch about 5.30 under the veranda. Two young cats tried to climb on our table. Later on ‘Summer Song’ we discussed the re-roofing needed with a young man who can start work next week.
Lin thought we’d had an unproductive day. I’m not sure. Perhaps the test of a place is when it stops being an exotic and temporary escape and becomes another kind of home. We’ve being working through lots of lists in recent days, getting connected to water and electricity, securing addresses, paying dues, anticipating a Greek tax return next year and overseeing, and paying bills for, work on a boat and a house. This island was once a passing image that included mouse island – Pondikonisis – a white church, blue sea and dark cypresses. In the months since last July when I clicked the ‘buy now’ button and bought ‘Summer Song’ sight unseen on eBay, I remain astonished at the unexpectedness of this extraordinary turn of events.

Tuesday, April 17, 2007
Around 5.30 the sound of rain on the cabin roof and a wind from the east in the rigging. Light shows grey clouds. We’ve had waking dreams three mornings in a row. Something in the home made wine? I find the current reasoning about the way dreams work convincing – randomly firing synapses producing a stream of data that the mind assembles and reads like faces in clouds or interpretations of Rorschach blots. The detail is uncanny. I was forced at the end of one dream, to prevent it causing mayhem, to grill a boa constrictor in a shallow tray of hot coals. The image was painful because of the danger posed to me and then the pain caused the snake. I was glad to wake. This morning a reception in a public building composed of architecture from diverse but familiar places and guests including colleagues I thought I knew but with novel extramural professions – one a jockey in riding clothes who greeted me cheerily. Abruptly the time seemed to change and then after a pause – the brain processing a flood of waste data - the whirr of helicopter blades. We were invaded by Nazis, one disguised as a Guards Sergeant-Major. I saw him lining up infantrymen outside, barking at the ranks to get lined up. Then soldiers walked in and took over. There was no fighting, no remonstrations nor announcements. A pause for further processing and then I realised - invented the notion with the data to hand - that the place had been taken over as the venue for an opera. The situation remained fluid. Should we try to coordinate some response? I felt fearful about risks. I asked three staff officers with their wives – all immaculately dressed, the men in uniforms, the women in white diamonte evening gowns - sitting in a cluster of armchairs in blasé anticipation of the entertainment to come, why they needed to come here. “Isn’t your great Berlin Opera House fine enough? And what about Vienna?” I asked ingratiatingly but also resentfully, but they were entirely off hand. The opera was going to go ahead and there was nothing anyone could do.

We were taken by a Greek friend to get our electric bill and water rate sorted. Found there’s Wifi at the Arco Café on the Liston. Two estimates for repairing the roof and a visit to assess taking out an upstairs wall to make one large front room next the balcony. Lin continues painting white over various off-white shades with me holding a step ladder as she reaches up. The plaster board is up awaiting skimming. A late drink at CJs. The large screen over the bar played a football match in England. It is difficult to imagine a more intense assembly of enthusiasts, with the sound track and real time editing moving so adroitly between grand view and intimate inspection of players that took even me into the drama. I shared my admiration with the owner. He commented that the screen shots we were seeing can also be seen by the crowd, but not by the referee. This creates grand differences of opinion. Later I remembered I’d seen no-one spitting. Everyone involved knows how closely they are being watched on screens across the world, especially those whose brands are attached to the players shirts. Earlier when strolling to pick up the car in Ano K I noticed something missing – no litter on Democracy Street or its tributary paths.

Monday, April 16, 2007
Cloudy. In Corfu town after dropping Lin at the house to get electrics and water transferred but to get the phone requires the presence of both of us plus the line’s previous users. “I’m arranging it” said A. Asked after his baby daughter seeing him looking tired. Saw K. to get rubber on the clutch pedal. Got Lin’s phone working with a Greek number. Back at the house made lunch while Lin continued painting. Neighbour’s wine goes well with feta, raw onion and olives – different pungencies. More work on the garden. First estimate for redoing both roofs. Two more estimates tomorrow. Supper of chicken and pork from the spit at George’s, Kontokali, then home to the boat. 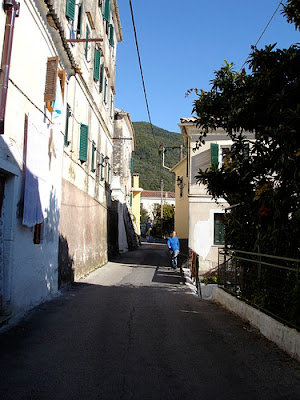